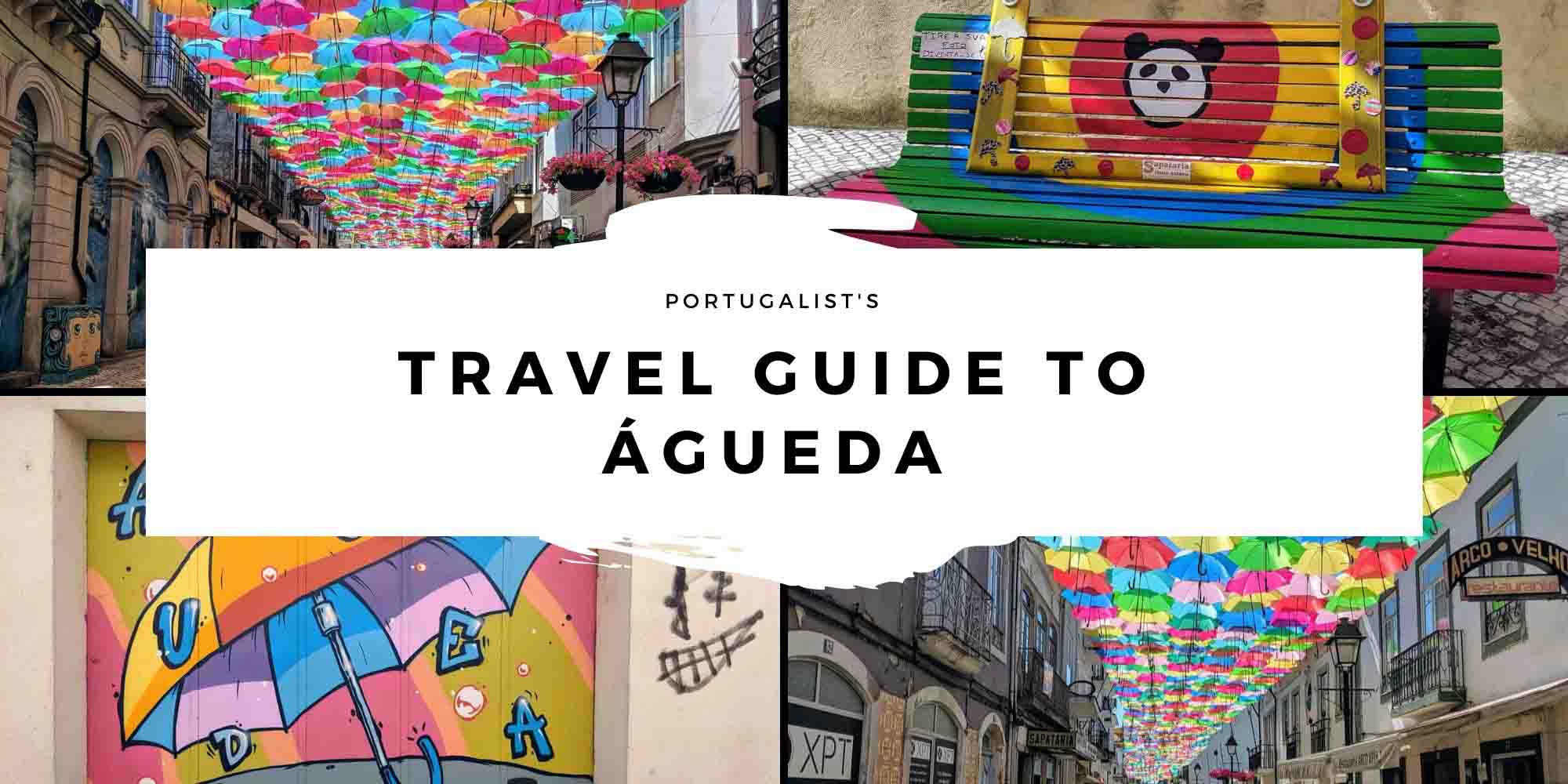 While driving between Coimbra and Aveiro, I had the chance to stop off at the original umbrella city: Águeda.

I was really impressed by the umbrella sky project, and all of the other artwork that goes with the annual ÁgitÁgueda Art Festival, and how it had transformed this Central Portuguese town into a hub of creativity and colour.

Up until a few years ago, Águeda wasn’t somewhere that you purposely stopped off at. As nice as the town is, there isn’t a lot to see and do in Águeda itself.

Meanwhile Aveiro, which has the prestigious nickname of the “Venice of Portugal,” is just 35 km away and Coimbra, a definite must-visit destination in Portugal, is around 65 km away.

Águeda’s fortunes changes in 2011, however, when, as part of the annual ÁgitÁgueda Art Festival which takes place in the summer, local creative firm Sexta Feira hung 3000 umbrellas on suspended cables in the town centre.

The project was both an aesthetic one and a practical one. Águeda, like a lot of Portugal, gets hot during the summer, and these umbrellas provided welcome shade from the hot, summer sun.

But practical was just part of the goal. The umbrellas, and the accompanying street art, brightened up the town and turned it into somewhere that people started to stop off at. And, as they stopped off and took selfies and those selfies then made it onto social media, it wasn’t long before more and more people started visiting Águeda.

Since then, other cities have taken note of Águeda’s low-cost success story and created umbrella streets of their own. You’ll find them all over the world now: in places like Bucharest, Bangkok, Quebec, and Dubai. It’s even spread to other cities in Portugal, like Olhao.

This has forced Águeda to continue to innovate. What do you do when other cities start making umbrella streets as well? Well, you make a tinsel street and you make a balloon street – you keep reinventing that colourful, Instagram-worthy wheel.

Having been to a few of those umbrella streets, and having also been to Águeda, and despite my obvious bias, I have to say that nowhere else does it quite like Águeda does.

The Umbrella Sky Project takes place every year between July and September, as part of the Agitágueda Festival which takes place in July.

More information, including a list of events, can be found at agitÁgueda.com

There’s also plenty of great street art dotted around Águeda. It’s fun to wander around and stumble upon it but, if you’d prefer to be more methodical in your approach, there’s also a street art map.

There are several hotels, hostels, and guesthouses to stay at in Águeda.

I recommend using a hotel comparison site like hotelscombined.com as this allows you to compare prices and hotels across multiple sites like Exedia, Priceline, etc. Otherwise, here are a few handpicked suggestions for a few great places to stay.

Situated on the Western Coast of the country and close to both Aveiro and Coimbra, Águeda is very easy to get to whether that’s by car, bus, or train.

Águeda is very much a place that you stop off for a few hours to take photos, and that’s definitely easiest to do if you’re driving. It’s quite likely that you’ll be driving close to Águeda as well: it’s in between both Coimbra and Aveiro, two of the most popular destinations to visit in Portugal.

I found it hard to find parking in Águeda, and ended up parking in a residential part of town close to where the bus and train station are located.

According to Google, there is a car park on Rua Fernando Caldeira called Parque Auto Marques Castilho (map). Otherwise, keep driving like I did until you find something.

There are a good number of services per day, which means you can stop off at Águeda and then continue onto your next destination in the same day – although you will probably have change at Aveiro each time.

Overall, there seem to be far more train services than bus to Águeda and, although it’s good to compare both, the train is probably going to be the best option for most people.

Águeda’s train station is situated in the north of the city, around 700 metres from the town centre (map). There are numerous services per day, and it’s easy to get to most of the major cities nearby as well as to further afield locations like Lisbon, Porto, and Faro.

Train tickets and timetables can be found at cp.pt.

Águeda’s bus station is situated just south of the train station, around 500 metres from the town centre (map).

There are daily services to most major towns and cities in Portugal, including Lisbon and Porto, although often there are only 1-2 services per day in comparison to the 10+ options the train normally offers.

Bus tickets and timetables can be found at Rede Expressos.