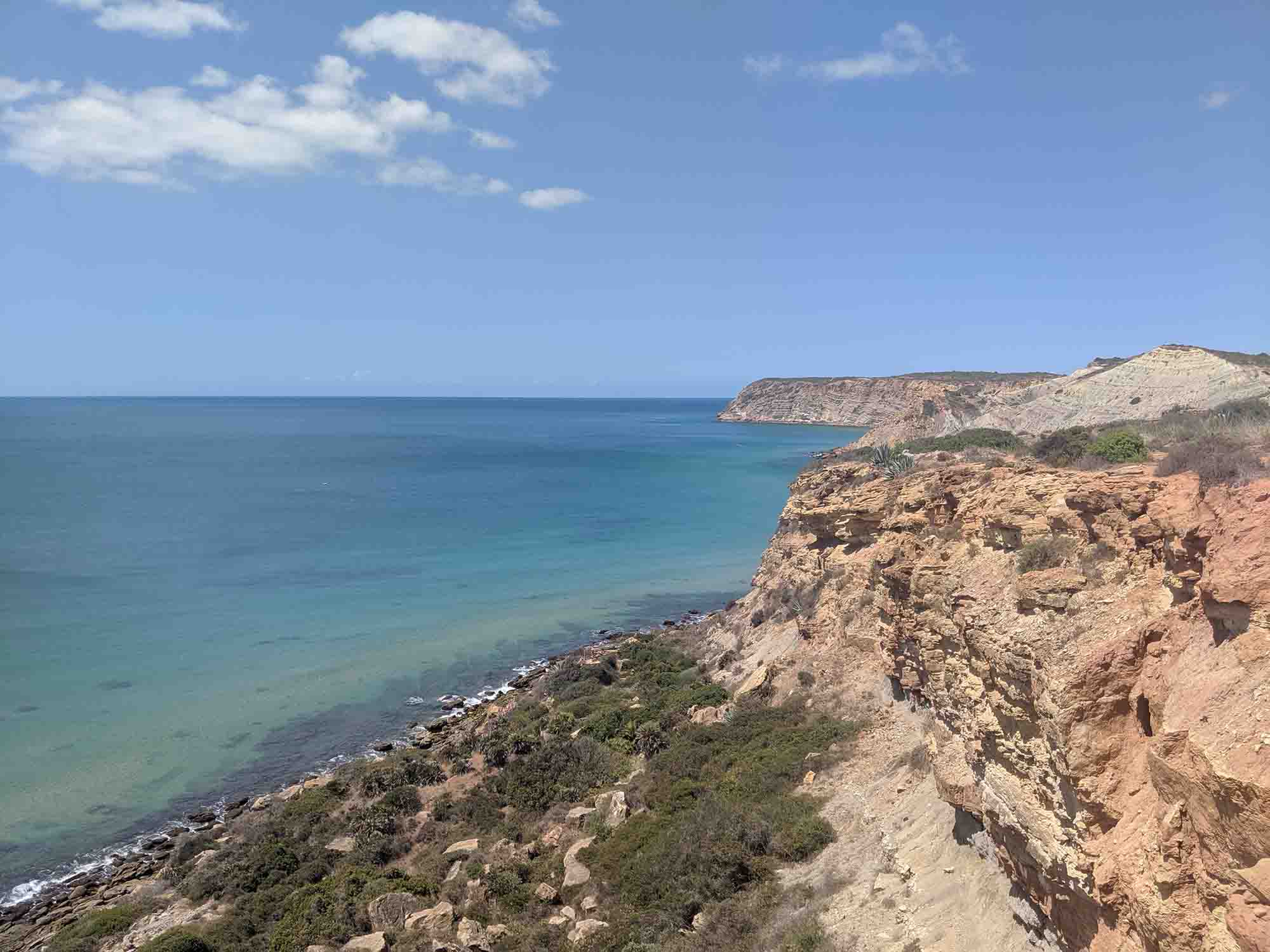 With more than 300 days of sunshine per year, it’s hard to beat the Algarve when it comes to weather.

That’s especially true in winter. While most of Europe is grey and cold during the winter, blue skies are the norm during winter here. In fact, it’s often usually warm enough to have Christmas dinner outside.

Say goodbye to those two hour commutes and ten-minute lunchbreaks where you quickly swallow a sandwich while working through your emails. Life moves slower on the Algarve.

Now, that’s not to say that people don’t work hard. In fact, long days are the norm for anyone working in tourism during the summer months but, in general, things just move a lot slower here and people take the time to slow down for the things that really matter: lunch.

And, there are more than a hundred beaches all spread out across the southern coast of Portugal so you’ll always have new ones to explore.

While some of these beaches can get very busy during the summer, there are so many that you can almost always find somewhere that’s quiet enough for your liking.

Portugal as a whole is one of the safest countries in the world, and that applies to the Algarve as well.

That’s not to say that crime or road accidents don’t exist here but, when compared to the rest of the world, Portugal is considered one of the safest places that you can live.

Integrating into a new country is never easy, and it can help to move somewhere that has a large expat community. And, the Algarve definitely has that.

For decades the Algarve has been a popular destination for people from all over the world, but particularly from the UK, Germany, Holland, and Brazil. In recent years, an increasing number of people from South Africa, the United States, Canada, and Venezuela.

Traditionally this group is made up of primarily of retirees but, in recent years, there has been an increase in younger people moving to the Algarve as well.

This has lead to the creation of many international meetup groups like book clubs and sports club, international supermarkets such as the Iceland Overseas British supermarket in Guia and Portimão, and, generally speaking, a much more international feel than you will find in other parts of Portugal.

Of course you plan to learn Portuguese, but learning a new language takes time — usually at least several months to get to a comfortable conversational level. Before you get to that stage, and even if you get to a stage where you’re very confident speaking Portuguese, it definitely helps to be able to switch to English when visiting the doctor, buying a house, speaking to a solicitor or accountant…anything else that’s important really.

And while the Portuguese generally have an excellent level of English, this isn’t the case in all of Portugal. The Algarve and big cities like Lisbon are often the exception rather than the rule.

That’s not to say everyone speaks English in the Algarve. Travel inland from the coast, or to some of the towns that don’t revolve around tourism, and you’ll quickly find people, particularly the older generation, that don’t speak much English. But, overall, English is widely spoken in the Algarve.

Which school is best? Is it better to put your kid through the Portuguese system or an international system like the British system? Those are all topics for debate and another article. The main point here is that the Algarve gives you a choice of schools that you won’t get in many other parts of Portugal.

While public transport in the Algarve is better than a lot of other parts of rural Portugal, it’s still very lacking and most people find they need a car to get around.

Getting to the beach by public transport is usually very difficult and, even though there’s a trainline in the Algarve, most of the train stations are situated several kilometres outside of the town centre.

People are spread out

The Algarve is a big place — roughly 150 kilometres long — and that can be a challenge when it comes to meeting new people or attending events. While there is a big community of people living on the Algarve, that community is incredibly spread out.

Having a large expat community is definitely a pro in a lot of ways, but the expat scene isn’t for everyone. English-speaking newspapers, British supermarkets, German butchers — amenities like this may not be the reason you moved to Portugal.

You may prefer to live somewhere that’s more authentically Portuguese and while the whole of the Algarve isn’t inauthentic, there are definitely parts of it that feel very different to the rest of Portugal.

Wasn’t the weather a pro? Yes.

The weather in the Algarve is fantastic but, for many people, July and August are just too hot. Temperatures are usually in the early 30s, but mid 30s is definitely not unheard of if you’re inland from the coast.

The Algarve revolves around tourism, and so does the local jobs market. And, even if you do get a job, wages in Portugal are some of the lowest in Europe.

Generally speaking, most people who move to Portugal, and particularly to the Algarve, bring their own means of income with them. For a lot of people that’s a pension, but for many others it means starting a business on the Algarve such as a guesthouse, dog kennel, or anything else they think is missing.

The Algarve revolves around the tourist season, and during the winter many of the towns on the coast are almost like ghost towns. Restaurants, bars, and apartments are all left shut up between October and March as people hibernate before another busy tourist season.

Some of the towns on the Algarve fluctuate between two extremes: one where there’s practically tumbleweeds blowing through some of the towns and the other where every bar and restaurant is packed. Neither are ideal, so it’s usually best to pick a town that isn’t so focused on tourism.

Forest fires are a problem in several parts of Portugal, and the Algarve can be one of them. In 2018, forest fires lead to more than 2,000 people being evacuated from their homes as more than 1,450 firefighters spent seven days battling the flames.

One of the problems with a lack of public transport is that, after a few too many glasses of wine at a restaurant or bar, there’s no bus or train to take you home. Even finding a taxi can be a challenge a lot of the time.

This leads to a lot of drink driving, something that’s common among expats and locals. Not only does it means that the roads are less safe for everyone else, but it also means that you’ll find yourself in a lot of compromising situations.

Lack of a big city

Many people enjoy the beach and enjoy nature but also want the atmosphere that goes with living in a big city.

Unfortunately, you’re not going to find that in the Algarve. The only two cities on the Algarve are Faro and Portimão, and both have a population of around fifty thousand.

Lisbon is the closest that you’ll find to that in Portugal, and even then many would consider it quite a small city.

Do the pros outweigh the cons. Let us know what you think by leaving a comment below.

1 thought on “The Pros & Cons of Living in the Algarve”