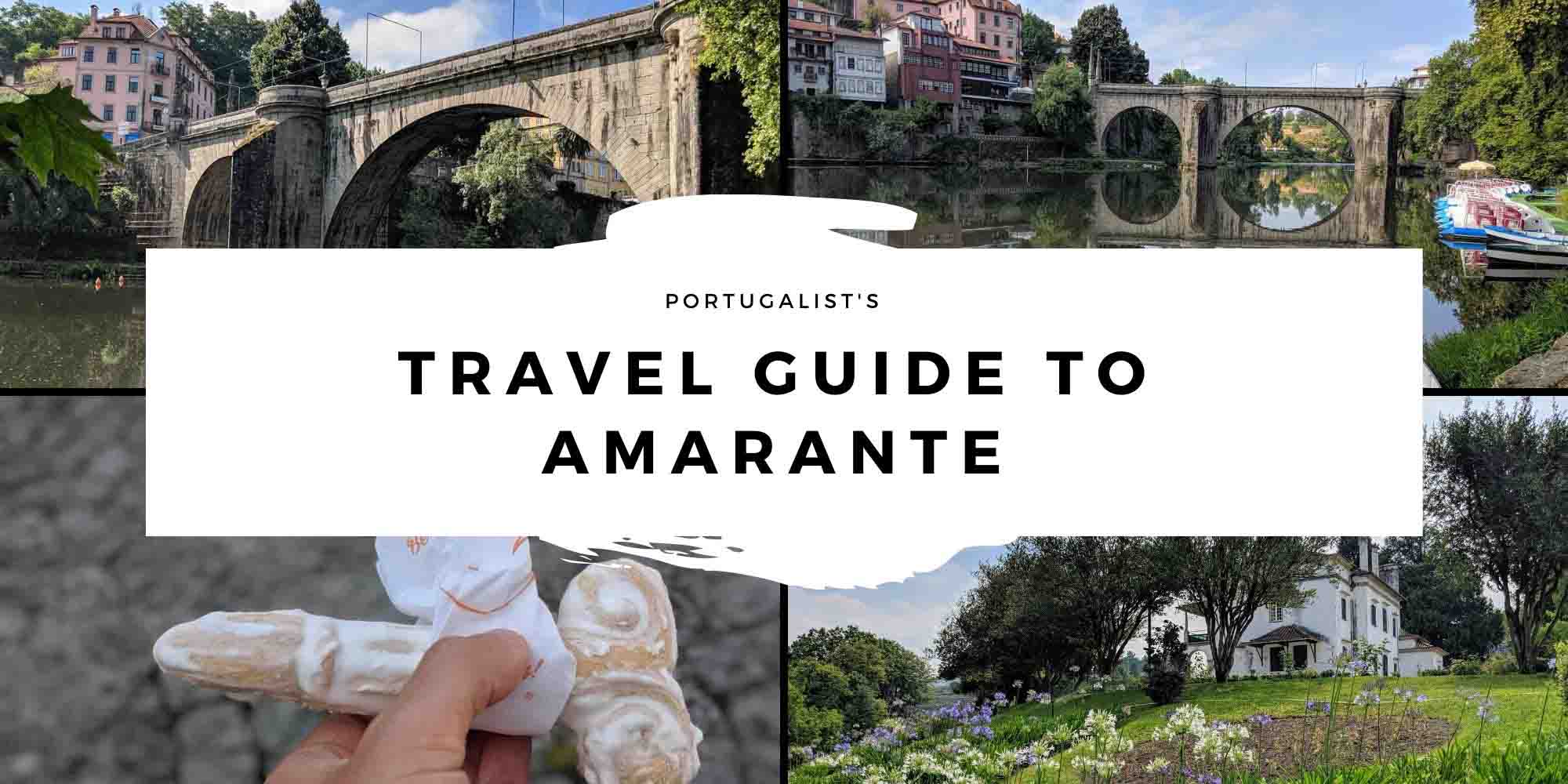 Amarante is one of the most beautiful towns in Portugal, and somewhere that I’ve actually been coming to for many decades – first as a child living in Portugal, then as a teenager visiting with family, and most recently as an adult. Even though the town is small, I’ve been here before, and I’ve seen just about everything that there is to see and do, it’s somewhere that I always enjoy coming back to.

Amarante is a small but very beautiful town that’s situated around 61 km east of Porto. Besides the bridge and the church, there isn’t a lot to see and do in Amarante, but it’s a beautiful day trip or half day trip from Porto or somewhere that you stop off on the way to some other nearby cities.

It’s also a popular stop for many walking the Santiago de Compostela walking trail, and you’ll see quite a few pilgrims (or walkers) in the town as well as the iconic seashell markers on the ground.

Featuring examples of Baroque and Neoclassical styles, this bridge has been classified as a national monument since 1910. You can walk across it, but some of the best views come from walking along the riverfront.

The São Gonçalo church and convent is one of Amarante’s main attractions, and it’s definitely somewhere that you should visit while you’re in Amarante.

King D. João III and his wife D. Catarina then decided that a larger church and convent should be built in Amarante on the site where his chapel was. Work began in 1543 and was completed sometime in the 18th Century.

The church features several different styles such as Renaissance, Mannerist, and Baroque, partly because construction took place over so many decades.

Like the Ponte De São Gonçalo, the church has been classified as a national monument since 1910.

Joaquim Pereira Teixeira de Vasconcelos, known as Teixeira de Pascoaes, was a Portuguese poet who, during his lifetime, was nominated five times for the Nobel prize for literature. Teixeira de Pascoaes had a unique style and pioneered a movement known as saudosismo, believing that saudade could have spiritual and transformative power.

His statue is located right in the small car park next to the Convento E Igreja De São Gonçalo.

Amarante’s public gardens (Parque Florestal de Amarante) are not big but pleasant to walk through.

Amarante’s most popular attraction, particularly for those with children, is the municipal swimming pool. Open from 9:30 am – 7:30 pm, this is an easy place for families to pass a few hours.

Less busy and with much more scenic surroundings is Amarante’s “praia fluvial” or river beach. It’s a beautiful spot for a picnic and somewhere to cool off during the hot summer days.

Take a pedalo down the Tâmega River

One of the best ways to see Amarante’s beautiful architecture, and to see the Ponte de São Gonçalo up close, is to rent a pedalo or rowing boat and take it for a ride along the river.

There are several places to rent them, particularly near the Praia Fluvial, but sometimes it can be hard to find the person who’s renting them.

Look in the bakeries and cake shops in Amarante and you might see a very rude-looking cake. Yes, it is exactly what you’re thinking: it’s a doce fálico (penis cake).

I knew to expect these cakes – in fact, I was keeping an eye out for them – but, if I hadn’t been, I definitely would have been surprised. It’s just not the sort of thing that you expect to find in a quaint little town that’s otherwise known for its beautiful river and church.

These crude cakes are believed to date back as far as Celtic times, and were handed out in January to usher in a new and fertile year. While the people of Amarante were willing to embrace Christianity, it seems that they weren’t willing to give up their dong delicacies and it was appropriated into their new culture.

Although little is known about São Gonçalo, Amarante’s local saint, it’s possible that he was believed to be some kind of cupid or matchmaker. Every June, during the São Gonçalo festival, you’ll find stalls all over the town selling doces fálicos or bolos de São Gonçalo. If a man is interested in a woman, he’ll give her one of these cookies in what’s possibly the least subtle form of flirting anywhere in the world.

Outside of June, you won’t see these ballsy biscuits everywhere in Amarante but it doesn’t take too long to find a pastelaria or even a stall selling them. There are several different types, some hard and some softer and filled with cream. True to life, they also come in many different sizes.

The harder ones are very similar to a Portuguese cakes called a suspiro, which is quite tough and not the easiest to eat.

Tip: Another place in Portugal with a penis obsession is Caldas da Rainha, near Óbidos and roughly an hour’s drive from Lisbon. Here, instead of cakes, they make pottery in phallic form, something which has just become a part of the region’s cultural heritage.

Amarante is situated in Portugal’s Vinho Verde, the popular light and spritzy “green wine” from the North of Portugal.

Like Guiness, people say that Vinho Verde doesn’t travel well and to really get a good glass of it you have to drink it where it’s made. So, when in Rome…

Several tour companies offer daytrips and guided tours from Porto and these can be booked through GetYourGuide or Viator.

Although you won’t need a car in Amarante, having a car does make it easier to get to and from other destinations.

Note: Amarante is very old and narrow so driving in the town is best avoided. Try to park outside of the historical town centre if you can (Google Map of parking spots).

You can easily get to Amarante by bus. From Porto, the trip only takes around an hour and it’s possible to do it as a day trip. You can also get a bus from other parts of the country, like Lisbon.

Although Amarante does have a train station, it doesn’t seem to be in service.

Where to Visit Next

From Amarante, it’s very easy to get to the following places:

How much time do I need for Amarante?

There are very few attractions in Amarante, and you can easily see it in as little as a far hours. It is a very pleasant and peaceful town, however, so you may want to spend a bit longer and maybe even an overnight or two there.

When’s the best to visit Amarante?

The very best time is in June for the São Gonçalo Festival, the biggest event that happens in Amarante. Failing that, try to visit outside of winter as it can be very cold and damp during the colder months.