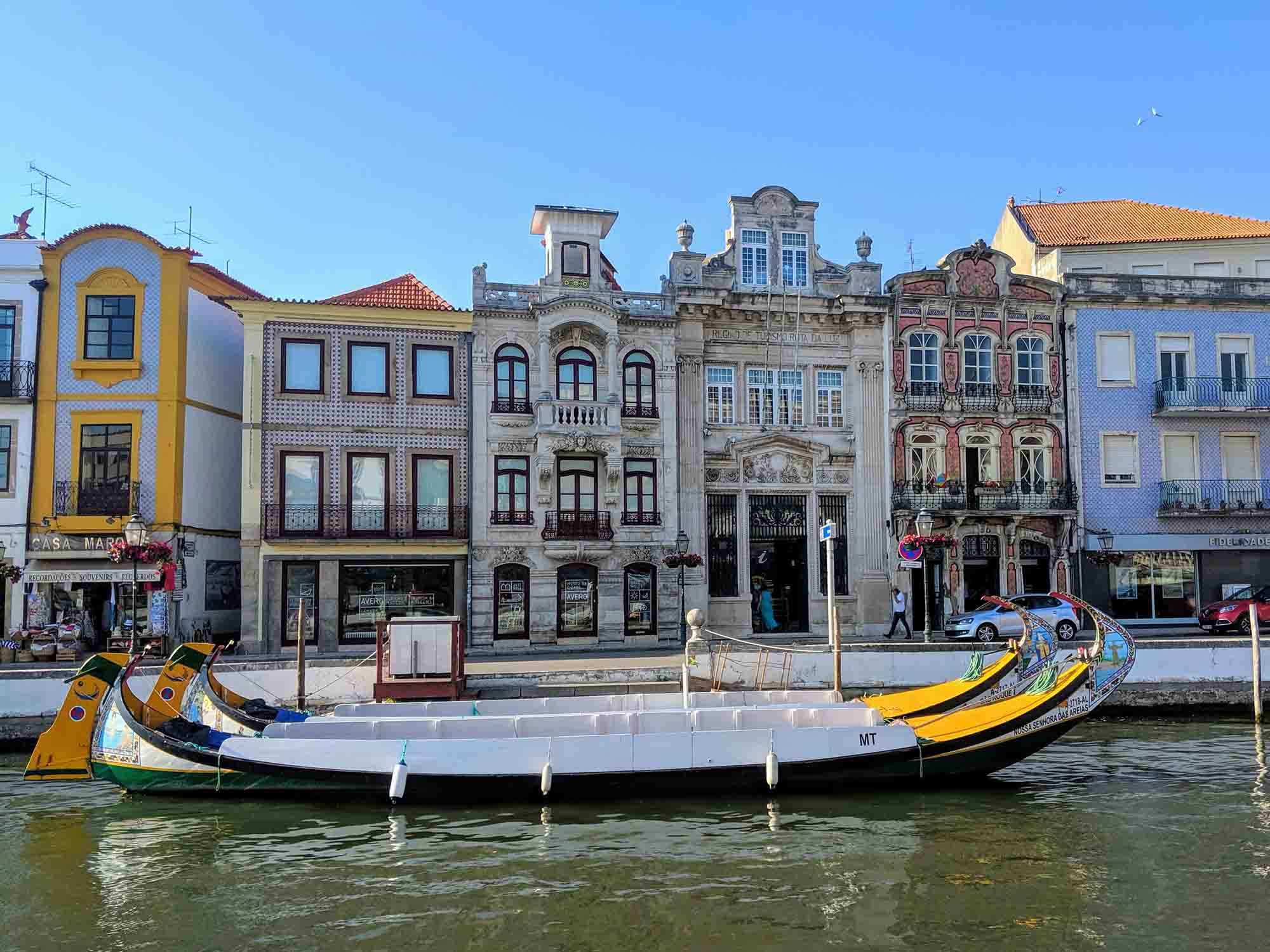 Known as the “Venice of Portugal”, Aveiro is a small, but beautiful Portuguese city. It’s famous for its canals (hence the Venice nickname) and the ovos moles sweets that come from here. You can see most of Aveiro’s attractions in a day, although it’ll be rushed. For a proper experience, and particularly if you want to visit the nearby beach, you should allow for an overnight stay.

With that in mind, here are some of the top things to see and do in Aveiro.

Hotel das Salinas – Contemporary-themed hotel accommodation with great breakfasts.
Hotel Moliceiro – A charming 4-star hotel with views over the Aveiro River.
Hotel Aveiro Palace – Modern and stylish designed rooms set in a historic building in Aveiro.
Hotel Imperial – Dated and basic, but clean, central, and affordable. I stayed here the last time I was in Aveiro.

Take a boat trip in a Moliceiro

Yes, it’s touristy but it’s also a lot of fun. And, it’s not overly expensive either: a 45-minute boat ride normally costs around €10. Compare that to Venice where a 30-minute ride in a gondola will set you back €80-120 on average.

The Museu de Aveiro is housed in the former Convent of Jesus of the female Dominican Order. Founded in 1458, this building has a very interesting history as it is where Princess D. Joana, the daughter of the King D. Afonso V, spent her life after committing herself to the work of the church. It’s also where Ovos Moles were apparently invented.

The building is incredibly beautiful, and definitely worth visiting.

Tip: You can get a “bilhete único” which not only gets you access to the Museu de Aveiro, but also the Museu da Cidade de Aveiro, Casa Major Pessoa – Museu Arte Nova de Aveiro, and the Ecomuseu Marinha Da Troncalhada as well. All for €5.

If you have the time, and you like museums, this is great value. Personally, I would really only recommend the Museu de Aveiro. The other museums were okay, but nothing particularly special. I really did like the Museu de Aveiro, though.

I really liked the salt marshes in Aveiro. They were unique and beautiful, and it didn’t cost anything to visit them either.

You can walk down to the salt marshes, but it’s mostly along a road and not the most scenic of walks. If you can find a moliceiro boat tour that allows you to stop off at the salt marshes for a little bit, this would definitely be a more enjoyable way of getting there.

There are two salt marsh areas, both of which have a café and a “swimming pool” where you can take a dip in the salty water for €4. I went to the “Ecomuseu Marinha da Troncalhada” first but I much preferred the area around the Marinha da Noeirinha.

Unlike the Ecomuseu Marinha da Troncalhada, it’s much further away from the road so you get to really appreciate the beauty of the area without seeing cars and buses in the background. If you only have time to visit one, I would recommend this one. It’s also slightly closer to Aveiro as well.

If you’re interested in finding out more about Aveiro’s salt industry, the café at Marinha da Noeirinha offers tours.

I wasn’t a big fan of ovos moles before visiting Aveiro but, having tasted some that were freshly-made and having even seen them made, I’m becoming a fan.

You’ll find ovos moles in every café in Aveiro, as well as in the small shops and supermarkets. It’s really worth going to a shop that specialises in ovos moles, though, and you’ll find several dotted around the city centre.

The first shop to start selling ovos moles, A Casa Maria da Apresentação da Cruz, Herdeiros, was founded in 1882 and still exists to this day. It’s pretty much in the centre of Aveiro (map) and so somewhere that you’ll easily be able to visit.

Take a day trip (or half-day trip) to Costa Nova

The nearby and wonderfully-picturesque town of Costa Nova is around 12 km from Aveiro. The colourful houses, which were once fishermen’s houses, are really beautiful and the beach there is fantastic as well.

You can easily get there by bus: I took the bus from the bus station in Aveiro, but realised that it actually stops in several places in Aveiro Centre. The easiest stop for most people will be opposite the Royal School of Languages (map) on Rua do Clube dos Galitos.

You can buy your ticket on the bus.