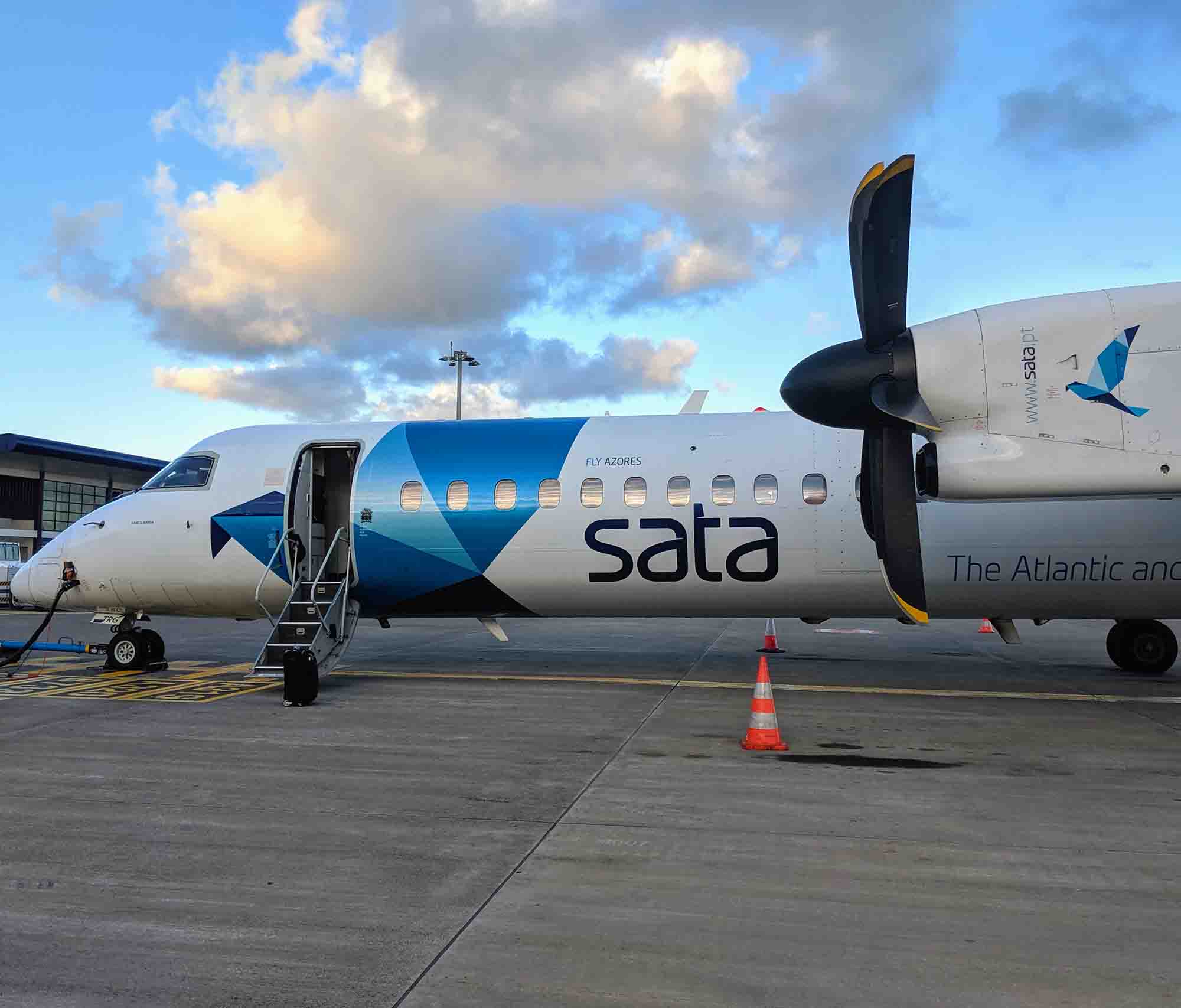 Most people have heard of TAP, the flag carrier and main airline in Portugal, but a lot of people don’t realise that this isn’t the only Portuguese airline.

Besides TAP, there are actually two other airlines in Portugal: Azores Airlines (which used to be called SATA and sort of still is) and which covers flights within and to the Azores, and an even smaller airline called Sevenair.

Sevenair is still very small, and some of its flight routes are a little obscure (you can fly from Cascais to Portimão, for example), so you may not ever end up flying with them. There’s a good chance you could even up flying with Azores Airlines, though, since they cover all of the island-to-island flights within the Azores and also fly from The Azores to some international destinations like The United States and Canada.

The planes are small

Some of the planes that fly between the islands on The Azores are really small: the smallest, the Bombardier Q200, has just 37 seats. Of course, if you’re flying to mainland Portugal or to North America, you’ll be in a bigger plane.

Most flights are really short

Most flights within between islands last just 30 minutes. It’s not the shortest commercial flight in the world. That flight, which goes from Westray and Papa Westray near the mainland of Orkney, takes a mere 57 seconds. Still, it’s pretty short – so short that by the time you start to settle in, the captain will announce that it’s time to land.

If you’re flying to mainland Portugal or especially to any destinations outside of Portugal, your flight time will be longer. That said, it’s surprisingly quick to get to The Azores from North America: a flight from Ponta Delgada on São Miguel take around 5 hours and 40 minutes.

There’s (normally) no food or drink

On the inter-island flights, there’s no food or drink – not even a glass of water and a biscuit. 30 minutes probably isn’t enough time for the staff to get themselves organised and, being honest, nobody needs food just for a 30-minute flight.

On the plus side, there’s nobody coming down the aisle hawking perfume and scratchcards every 10 minutes.

There’s no allocated seating on the inter-island flights. If you want a window seat, you’ll need to get in the queue early.

You don’t pay extra for bags

Unlike most airlines these days, Azores Airlines don’t charge extra for baggage. They also don’t eye up your cabin bags trying to work out if they can fine you for them.

There are definitely upsides to no luggage limitations but one of the downsides is that you end up bringing more than you need. Sometimes it’s good not to carry much luggage, particularly if you want to hire a scooter and also because there’s a lack of luggage storage services on The Azores.

Pricing doesn’t seem to change based on demand

Surprisingly, the flights don’t start off cheap and get more expensive as seats run out. Instead, the prices seem to stay the same regardless of how many seats there are.

Seats do run out, though, especially on the smaller planes, so don’t hold off booking.

Did you know: you can get a free inter-island flight?

If you’re flying to The Azores, you can get 1 free island-to-island flight. The form that you have to fill in is quite confusing, and sometimes it does take a bit of following up to get your free flight confirmed, but, if you persist, you will get it.

Hi, I'm James. I'm the main writer at Portugalist, and the guy who set it up. I started Portugalist because I felt there was a real lack of good quality information about Portugal and I wanted to change that. I lived in several parts of Portugal, like Lisbon and the Algarve, and I even spent 5 years living in the North of Portugal as a kid. Since returning to Portugal as an adult, I've visited every part of Portugal.
About this article
This article was first published in July 2019. It was last updated on May 20, 2020.
Corrections & Suggestions
We try to keep articles as up-to-date and as error-free as possible so, if you spot a mistake or have a suggestion for the article, please let us know.
How Portugalist earns money
This article may contain affiliate links. This basically means that Portugalist might earn a commission if you choose to make a purchase through the links in this article. This is at no additional cost to you and it does not affect our editorial standards in any way.
Portugalist.com is a participant in the Amazon Services LLC Associates Program, an affiliate advertising program designed to provide a means for website owners to earn advertising fees by advertising and linking to Amazon (.es, .co.uk, .de etc) and any other website that may be affiliated with Amazon Service LLC.