Skip to content
Portugalist > The Azores: A (seriously comprehensive) Guide 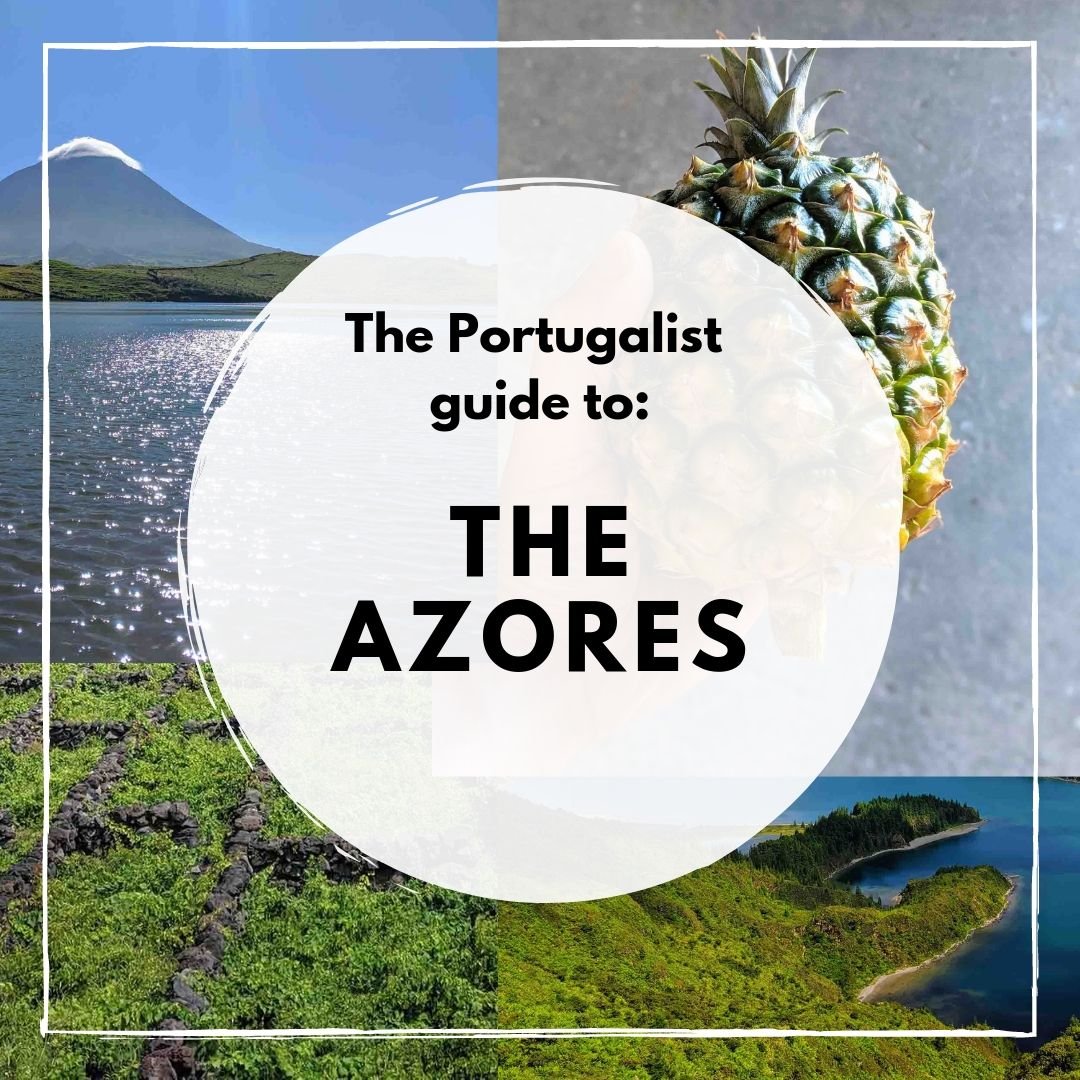 The Azores (or Açores in Portuguese) is an archipelago or group of 9 islands that’s located in the Atlantic Ocean between continental Portugal and North America.

The islands were formed due to shifting plates and volcanic activity, and this is characteristic of the islands’ landscapes. São Miguel is made up of beautiful “lagoas” or lakes inside the craters of former volcanoes. São Jorge is made up of “Fajas” which are cliffs that have collapsed and formed new, tiny peninsulas of land – and many of them were formed during earthquakes. Mount Pico, Portugal’s highest mountain on the island of Pico, was once a volcano and, when you get to the top, you’ll actually be inside the crater of a former volcano.

These islands are unlike anywhere in continental Portugal. Not only do the islands have a different landscape because of the previous volcanic activity, but the weather is different: it’s more tropical and humid than mainland Portugal.

It’s a fascinating Portugal that most people have never heard of. It’s expected to explode in popularity very soon, which obviously will change the DNA of the islands completely. If you are able to visit the Azores, now is the time to do it!

Islands in The Azores

Which islands should I visit?

It depends on how much time you have.

If you only have time to visit one island, São Miguel is probably the one to visit first. There’s plenty to see and do and, just as importantly, there are also plenty of flights there.

After that, Terceira is the second most popular island to visit. It also has flights to mainland Portugal and to some international destinations, so you *might* be able to finish your trip there and fly home from Terceira Lajes Airport without having to fly back to Ponta Delgada Airport on São Miguel.

After that, it really does depend on how much time you have. The 9 islands are split into 3 different clusters, so it makes sense to think a little bit in terms of those clusters. This is especially important if you’re planning on using the ferry to get from island to island (which is much cheaper than flying).

An overview of the 9 Azores islands

Known for its beautiful lagoas (lakes), hot springs, tea and pineapple plantations, this is not only the most popular island in the Azores but one of the most beautiful islands to visit.

Famous for natural attractions – including a former volcano that you can walk around the edge of – as well as being home to the bar where the gin and tonic was apparently invented.

Known as the island of fajãs, São Jorge is famous for its wild and rugged landscape.

The smallest island in terms of population, with just over 400 residents.

How much time do I need for each island?

2-3 days is a good average per island, with a little more time for São Miguel, but don’t expect it to be as easy as just allocating 2-3 days per island! There are two things you need to take into account:

You can’t really do anything about the unchangeable weather aside from staying as flexible as possible. That means giving yourself a little extra time on the island(s) just in case the weather is bad rather than expecting to see an entire island in one day.

There is also not a lot that you can do about flights and ferries, but at least you can get the timetable in advance (unlike the weather).

Getting to the Azores

If you’re heading to The Azores from the rest of Portugal, it’s likely you’ll either fly into either:

Yes, there are also flights from Lisbon to some other islands including Faial and Pico but the majority of flights are to São Miguel and Terceira.

São Miguel is the bigger of the two islands and it has the biggest airport and the most domestic and international flights, but Terceira is growing and has flights to some international destinations in the US and Canada.

Note: there is no ferry service between continental Portugal and The Azores.

Getting from island to island

There are two main ways to get around the Azores: by plane (Azores Airlines) with or by ferry (with Atlanticoline) . Generally it makes more financial sense to travel by ferry, but there are some instances when you might want to (or need to) fly instead.

Time is one reason. Flying is usually faster than taking the ferry, and you probably have a limited amount of time.

Another reason is that you can’t go everywhere by ferry. You can’t go from the left cluster to the right cluster (or vice versa) for example. To go from São Miguel to Flores, you would need to go to Faial first (typically a 16-hour and 4-stop journey) and then take the ferry from there to Flores (another 9 hours or so). The non-stop flight, in comparison, typically takes 1 hour and 15 minutes.

Tip: Did you know that you can get 1 free inter-island flight from Azores Airlines when you visit the Azores?

Which islands should I visit?

Of course, not everyone has time to visit all of the islands in the Azores. If you’re like most people, you probably only have a limited amount of time to see as much of the Azores before you have to get back home.

If you just have time for one island, I’d recommend São Miguel. If you have time for more than one, I’d consider adding on either Terceira and/or some of the islands in the Triangle (São Jorge, Pico, and Faial) because it’s easy to get between them by ferry.

If you wanted to visit all of the islands, a sample itinerary would look like this:

Not everyone has the time to visit all of the islands, as mentioned, but the following should give you an idea of how you can get around the islands.

If you only have 2-3 days, it’s probably best to go to São Miguel. There’s plenty to see and do there and, because it’s the largest island, there are also plenty of flights.

If you want to visit Santa Maria, you should do it after São Miguel as you can only get to it from São Miguel (either by plane or by ferry). This does mean that you’ll have to go back to São Miguel to catch another flight or ferry to your next destination, which is obviously time-consuming and may not be suitable for everyone. If it’s not suitable for you, jump down to the next section.

After that, you could consider adding on some of the islands in the middle cluster – especially the Triangle (Pico, Faial, and São Jorge) as they’re very close together.

Pico and Faial are just a 30-minute ferry ride from each other and, if you have time for it, São Jorge (Velas) is about an hour on the ferry.

There are usually flights from Horta Airport (Faial) to Lisbon but, if you’re planning on flying internationally, or just want more flight options, you’ll probably need to fly from Terceira Airport and so it makes sense to factor in some time on Terceira as well.

Graciosa is a little further away again, but you can get a ferry from either São Jorge (Velas) or Terceira (Praia da Vitória). If you’re not planning on doing the left cluster (Flores and Corvo), it probably makes sense to go from São Jorge -> Graciosa -> Terceira and then fly from Terceira Airport.

If you are planning on visiting the left cluster, you may want to leave Graciosa out of this section and do it on the way back to Terceira.

If you’re visiting the left cluster, you *might* be able to get a 9-hour ferry from Horta on Faial to Lajes on Flores. It’s quite irregular, though, and you’ll more than likely have to fly. Horta to Flores is normally the best route here.

Flores and Corvo are just 40 minutes by ferry, so it’s easy to visit both.

The next step is a little tricky. It doesn’t seem to be possible to fly to Graciosa from Corvo without a stopover, but sometimes that stopover is just a few hours. It might be the most sensible way of getting there.

Corvo to Terceira also seems to normally include a stopover, but sometimes that stopover is just 1-2 hours which is manageable.

Alternatively, there are normally non-stop flights from Flores Santa Cruz Airport to Terceira. This would mean getting the ferry back from Corvo to Flores (Santa Cruz). The airport is roughly 1.1 kms from the ferry port.

Finally, Terceira Airport has flights to mainland Portugal and a few international flights as well so it’s a good island to finish up on.

When is the best time to visit the Azores?

In terms of weather, the best months to visit the Azores are between May and October.

For whale watching, the best months are April and May but whales can normally be seen until September (tip: Pico is the best island for spotting whales).

As with anywhere in Portugal, July and August are the busiest months. This means more tourists, less rental car availability, and higher prices for both cars and accommodation. Of course, the flipside of that is that there’s typically less rainfall and more sunshine during those two months.

Note: Even if you visit during “good weather season,” you really need to prepare for both rain and sunshine – often in the space of a couple of hours. Even if it looks sunny on the day, bring a raincoat with you just in case. The opposite applies too: if it looks wet, bring your swimsuit and some sunscreen just in case.

FAQs about the Azores

Is there a ferry between mainland Portugal and the Azores?

What language do they speak on the Azores?

Portuguese (but with a different accent).

Although the Azores is different in many ways to mainland Portugal, it’s still a part of Portugal. People speak Portuguese, use the Euro, and drive on the right.