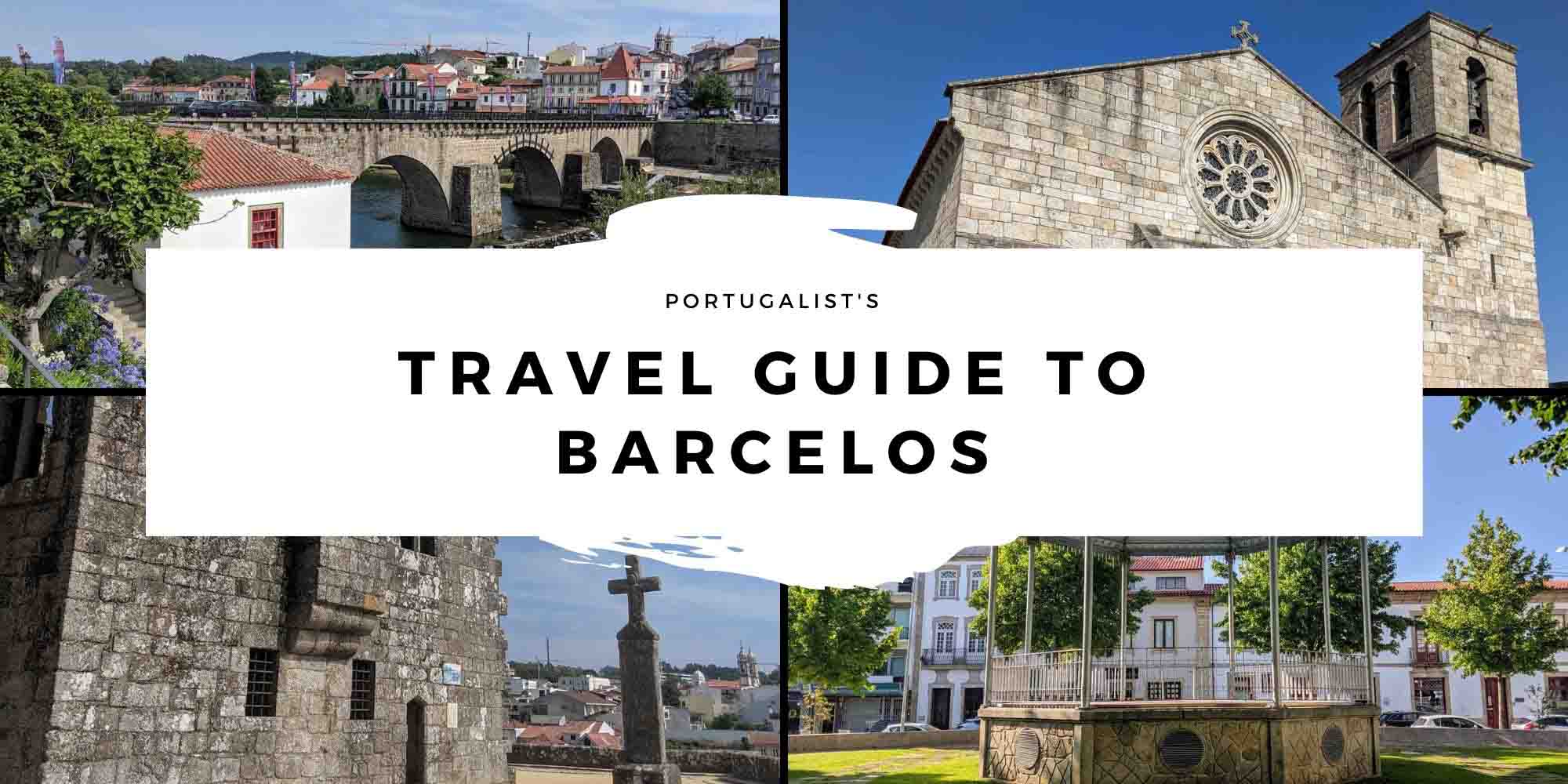 After seeing the Barcelos rooster everywhere in Portugal, and even using it in the logo for this website, I knew Barcelos was just somewhere that I had to visit. As luck would have it, I’ve ended up visiting it several times and am now intimately familiar with the famous rooster city.

Barcelos’ best attraction is probably its weekly market, but mention to Barcelos to most people and they’ll probably say “rooster.”

The “Cockerel of Barcelos” is definitely a big part of this small city’s identity. Everywhere you look, whether that’s the roundabout on the way into the city or in the little shops around the city, there’s something rooster-related.

Naturally, there are a fair few souvenir shops selling cockerel keepsakes – aprons, towels, figurines, you name it – but Barcelos doesn’t have an overly touristy feeling. It does get its fair share of tour groups coming from nearby Porto (60 km away), and it’s also a popular stop on the Santiago de Compostela pilgrimage, but, even still, Barcelos is still quiet in comparison to other destinations in Portugal.

The story of the “Rooster of Barcelos”

Once upon a time, a long, long, time ago in the town of Barcelos, there was a wealthy landowner. One day, the wealthy landowner noticed that some of his silver was missing and he set out to catch the thief.

Now, it just so happened that a pilgrim was walking the camino to Santiago de Compostela at the same time. He was considered a suspect and, even through he protested his innocence, he was arrested and condemned to death by hanging.

The pilgrim asked to be taken to the judge who had sentenced him to hanging. The authorities honoured his request and took him to the home of the judge who was hosting a banquet.

The pilgrim pointed to a roast rooster that was on the table and said, “If I am innocent, that rooster will get up and crow.” While the judge didn’t let him go, he also didn’t eat the rooster.

The pilgrim was taken to the gallows but, just as he was about to be hung, the rooster stood up and crowed. Realising his mistake, the judge rushed to the gallows and “luckily” found that the rope had not been properly tied and the man was still alive.

Years later, the pilgrim returned to Barcelos where he sculpted a cross dedicated to the Virgin Mary and to Saint James. That cross can still be seen today at the Archaeological Museum of Barcelos.

You’ll find giant models of roosters on the streets of Barcelos, and they’re fun to look at and take photos of.

As well as giant roosters, there are also giant figurines symbolising countryfolk dotted around the country.

Cruzeiro do Senhor do Galo

While the big roosters are fun, the Cruzeiro Do Senhor Do Galo is one of the most important historical artefacts that you’ll find in the city of Barcelos.

It can be seen at the Archaeological Museum of Barcelos, outside next to the Igreja De Santa Maria Maior De Barcelos and the ruins of the Paço Dos Condes De Barcelos. It’s free to visit.

Although nothing really remains of Barcelos’ Torre Medieval, it is in excellent condition. Throughout the year there are different exhibitions inside, which keep you entertained as you climb to the top floor. From the top, you can see out over some of the streets of Barcelos.

The Ponte de Barcelos, which crosses the Cávado River and connects Barcelos and Barcelinhos, is incredibly beautiful. It can be a bit busy with traffic on the bridge itself, but you’ll get great views from either side of the bridge.

The bridge was built in the early part of the 14th Century, between 1325 and 1330, and, since 1910, is classified as a national monument. It comprises of five arches and has a watermill on one side.

I didn’t really appreciate the significance of these ruins when I first visited them, only later realising that’s where the Cruzeiro Do Senhor Do Galo was located. I also didn’t know, and couldn’t have even guessed, that it was once a palace.

Once upon a time, the Paço Dos Condes De Barcelos (also called Paço dos Duques de Bragança) was the most expensive building ever built. Constructed in the first half of the fifteenth century on behalf of Alfonso I, Duke of Bragança, the building was once a luxurious palatial castle.

Unfortunately it badly damaged in the 1755 earthquake, which later led to it collapsing in 1801. As of 1910, the Paço Dos Condes De Barcelos is considered a national monument.

The Igreja De Santa Maria Maior De Barcelos is a 14th Century Church, and the parish church of Barcelos.

The church was constructed between two periods: The Romanesque and the Gothic, and there is considerable overlap between the two styles.

The Igreja Do Bom Jesus Da Cruz is one of the largest churches in Barcelos, and it sits in a very prominent location right in the heart of Barcelos’ City Centre.

In 1698, the Archbishop of Braga , D. João (IX) de Sousa, decided that the church needed to be replaced and he organised a contest among architects to design the new building. The contest lasted several years, and it wasn’t until 1701 that Lisbon architect João Antunes and Manuel Fernandes da Silva from the North of Portugal presented their blueprints.

Construction began in 1705 and was completed just five years later in 1710. The church’ design has a strong Italian baroque influence and is one of the best examples of this style that can be found in Portugal.

While the other two churches are great, the most beautiful is probably the Igreja de Nossa Senhora do Terço.

This church, which is normally very quiet and much less popular than the other two, has beautiful blue and white azulejos on the wall and biblical scenes painted on wood on the ceiling.

Barcelos’ Weekly Market is the largest in Portugal and one of the largest markets in the whole of Europe. It attracts traders from all across the Minho Region and beyond and is a fantastic place to pick up some pottery, handicrafts, souvenir roosters, or just your fruit and veg for the week.

It’s hard to find specific dishes that are completely unique to Barcelos, but there are quite a few dishes that, although found elsewhere in Portugal, have a Barcelos style or take.

Barcelos is situated north of Porto and close to Braga. It’s roughly 60 km from Porto and 22 km from Braga.

The easiest way to get around most of Portugal is by car, although it isn’t essential for Barcelos as it has good public transport links.

It’s normally easy to park in the Campo da República in the town centre, except on market days (Thursdays). If you’re visiting Barcelos on a Thursday, it’s best to look for parking outside of the city centre or to just take public transport instead.

Barcelos has both a train and a bus station, so it’s easy to get there by public transport.

Train tickets can be purchased on cp.pt. Discounted tickets may be available if you book in advance (see here).

It’s possible to get from Barcelos to just about anywhere in Portugal (and internationally) by bus. The journey from Barcelos to Porto takes around 60-90 minutes, while the journey to Lisbon is longer – roughly 4.5-5 hours on average.

Coach tickets can be purchased on Rede Expressos.