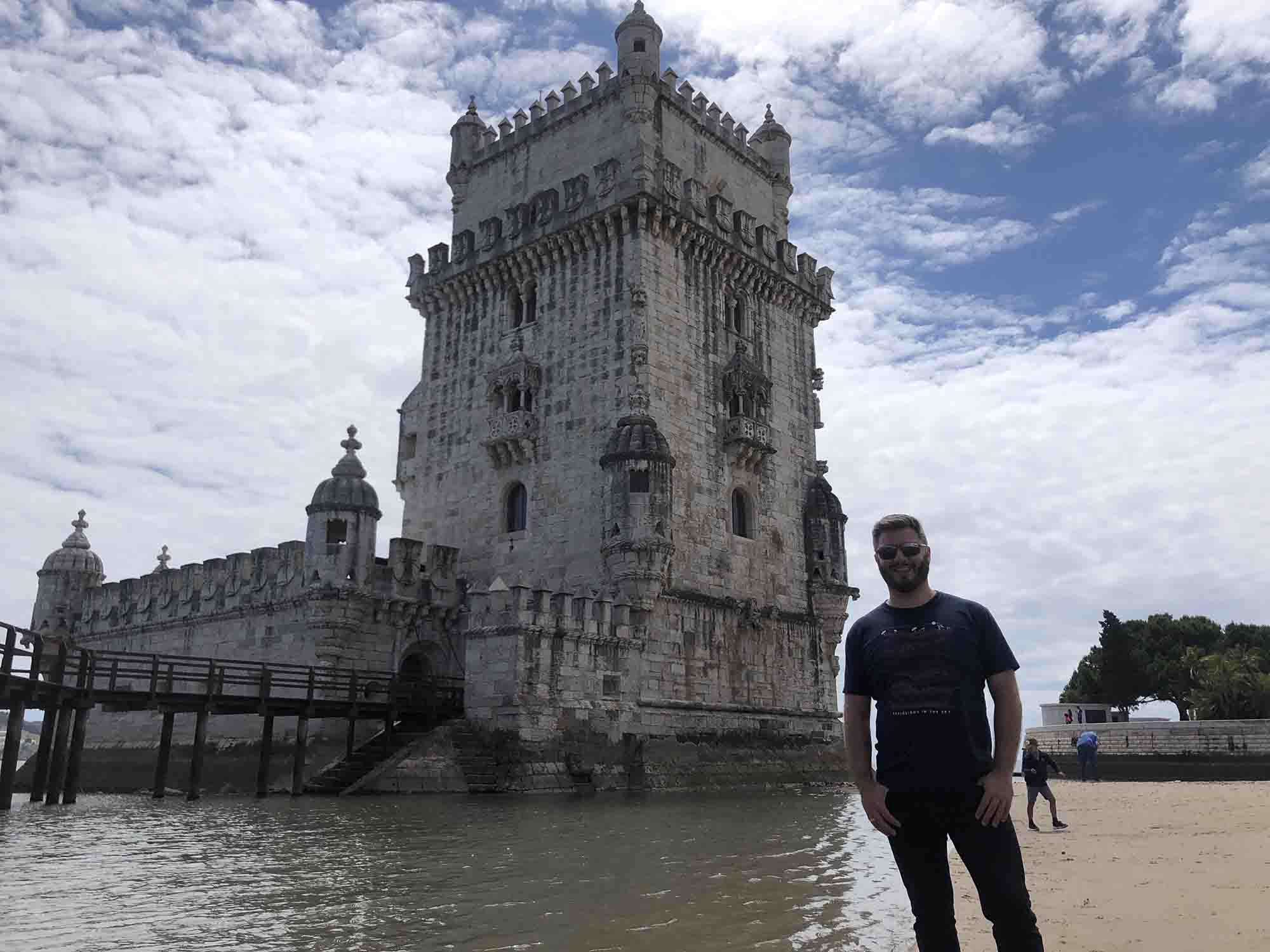 David McNeill is the owner of Expat Empire, a website that helps you in the process of moving abroad and which he runs from Porto. But although he’s based in Portugal now, this wasn’t where he initially thought he’d end up.

James: Tell me a little bit about yourself and how you ended up in Porto

David: I’m originally from California but moved around a lot growing up due to my parents’ jobs. For me, the travel passion all started with Japan. While I was at middle school in Los Angeles there was an after school program at another school in the city that was twinned with a sister university in Japan. I went there and started taking after school classes and working with language tutors before eventually doing an immersion program during the summer after my freshman year of high school. My big goal was to visit Japan and I finally took my first trip when I was seventeen, which was a one-month homestay travel and language program for highschoolers. I came out of that just trying to figure out how I could move to Japan.

I studied Japanese and international business with a focus on finance at the University of Texas, Austin. After my freshman year, I managed to take another trip to Japan and I was able to travel around a lot of the country, even seeing parts that I hadn’t seen before. When I came back from there, I realised I wanted to go back to Japan but this time not as a tourist. I wanted to actually live there.

James: And did you manage to do that?

David: Not quite. I was looking for ways to get to Japan or abroad, but I couldn’t find the right opportunity – for Japan or anywhere. I did manage to find a job that gave me three months in Beijing and I considered that maybe Japan was the wrong choice: maybe the right choice for the times was China. So I spent three months working in China and after I came back, the head of the group said he needed people to go back to Asia. Unfortunately, two weeks later he gave his notice. I remember having a meeting on a Thursday night with my boss and he told me I was going to go back to China. The next morning he pulled me into a conference room and I was laid off.

I still wanted to go abroad and especially Japan, but I decided to take two months to travel around Europe and take interviews with companies in China and Japan, which I did from crappy wifi in hotels around Europe. Long story short, I got the job and moved to Tokyo for two years.

James: So you finally made it?

David: I did and, yes, it was great, at least initially. But unfortunately, it was a two-person team and when the other person left, my job came under question. I couldn’t find anything else in Japan but managed to find something in Berlin, which was one of the cities I’d really liked when I was travelling around Europe.

James: And how was Berlin?

David: A big culture shock coming from Japan. Japan was obviously a big culture shock, but I’d studied Japanese language and culture for a long time. I wasn’t ready for the Berlin-style attitude that it’s so famous for. I had gone from Japan where the customer really is number one, even more than America, and in Berlin the customer is bottom of the list.

But moving to Berlin was an opportunity to take an English-speaking role within Central Europe. I worked three jobs within three years. Two I quit and one I was laid off from. There are a lot of startups and opportunities in Berlin, but they’re not all the cream of the crop. On the plus side, I met my wife there.

After the lay-off, we decided we really wanted to move to Portugal but I took job interviews with companies all over Europe. We were interested in other cities, like Amsterdam, but we began to realise that a lot of the things that were starting to irritate us about Berlin would be similar in other Northern European cities. In Germany we had the cold weather and cold people but we were now ready for warm weather and warm people.

David: People say that, but it’s not like Berlin. There might be a bad month or two but winters don’t last for months and months at a time.

David: Exactly. I came here on a highly qualified worker visa and worked for that job, which was a company that helped people move abroad, for a year.

James: Did your employers arrange the visa for you?

David: Well, at first they didn’t mention anything in terms of relocation. I brought this up and they said they only mention it if people ask. So, that’s a good takeaway: always ask.

I was told I could either take a taxable lump sum or work with a relocation company, who would help with things like finding an apartment. As I knew how difficult it is to get set up when moving to a new country, I went for this. They weren’t able to arrange the residency visa, so we had to work with an immigration lawyer for that. The company provided all the relevant documents, but we had to arrange that ourselves. Meanwhile, my wife came in on the family reunification visa. It was two different visa processes.

Unfortunately,  at the end of my one-year contract, I was laid off due to budget cuts coming from the pandemic. But it gave me the incentive to start working full-time on Expat Empire, which is what I really wanted to do.

James: Were you able to get unemployment support?

David: Thankfully, I had worked just enough days to be entitled to six months of unemployment benefit, which was generous. In terms of getting access to it, there were definitely a lot of emails on my end but that’s because I was used to how things are in Germany. There you have to notify that you’re being laid off before the job ends, but in Portugal, you only get approved after the final documents are submitted by your previous employer in the months after you leave the job. Eventually, the unemployment office emailed back and said not to worry, I would be getting support.

Both the HR department in that job and the unemployment office told me that there was a scheme where, if you want to start a business, you can apply to get all of your entitlement paid upfront, which you can use to fund that business. The problem with this scheme, however, is that it takes ages – even longer than the six months. However, they also put me in touch with an agency who suggested I take a loan as well through a program known as the Microinvest program. It was a long process, but it was really helpful to have a government agency work with me, and especially work with me in English. The scheme also comes with two years of support where I can utilise their lawyers, designers, or get accounting help, for example.

James: Would you say that integration into the system has been straightforward?

David: I don’t know about straightforward, but coming in as an employee rather than a freelancer definitely made things easier. There was a HR department who would tell me which appointments to go to and even to come to Finanças with me in case I needed a guarantor. There were also other employees who’d gone through the process that I could speak to.

It’s true that some things aren’t as straightforward. For example, with the Microinvest program I needed to change my business bank address when I moved from Matosinhos but it wasn’t just a case of updating my details online or even over the phone. They actually had to prepare new documentation, which I had to come in and sign. But paperwork is just an element of living in Portugal.

James: And what about integrating into the culture?

David: It’s a difficult one to answer because a lot of our experience has been during the pandemic. I will say that although it can be slow and complicated, it does feel like people genuinely try to help. We didn’t feel that in Berlin. Portugal is not as structured as Germany, sure, but I think it feels better.

James: And you initially moved to Matosinhos?

David: The company I was working for was based there and it was close to the beach. After two years of being there, we’ve just moved to Downtown Porto. I really liked Matosinhos, but coming into Downtown Porto to make friends or come to a meetup got tiring after a while as it was a 45-minute trip on the metro. Matosinhos feels like a small beach town, and it worked well for the first two years, but it’s been good to have a change.

James: If someone was thinking of moving to Porto, where would you recommend?

David: Because Porto is relatively small, you can’t go too wrong. We had a friend who’d lived near the river, near Casa da Música, and in Bonfim, and she said to go for Bonfim. We wanted somewhere that was central but not where all the tourist activity is based. It’s central but it still feels local.

James: And as well as your business, you now run a meetup in Porto?

David: I had run a meetup in Berlin called Berlin Bootstrappers and a friend suggested that I do the same in Porto. It wanted to meet people, but a lot of the other meetups were the international party type and I wanted something that was more networking-based. The first two meetups of Expat Chats were in February and March 2020, so there have definitely been a few ups and downs through the various lockdowns. I think there’s an appreciation for it as a lot of the other meetups in Porto haven’t returned post-covid, unfortunately, but this one has.