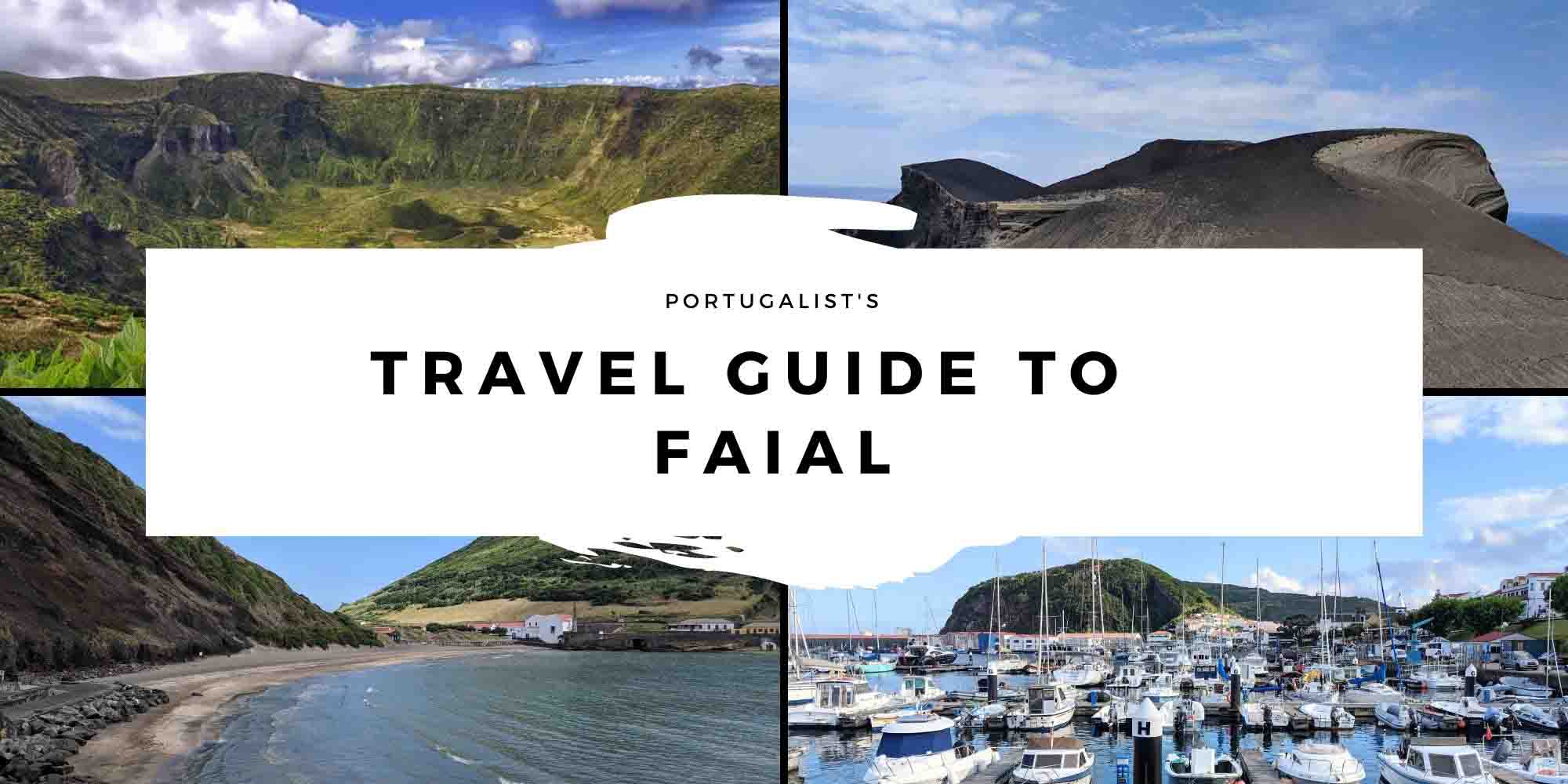 Faial is one of the most beautiful islands in the Azores, and it offers several interesting things to do.

It has a good airport and so it’s possible to get here from mainland Portugal (Lisbon mainly) as well as from many of the other islands on the Azores including Terceira and São Miguel.

It also has one of the best ports in the Azores, and it’s a popular destination for sailors on transatlantic crossings to stop off at.

Horta, the main town on the island, is a good place to stay. There are restaurants, bars, cafés, and at least one large supermarket.

Of course, if you have a car, you can stay just about anywhere on the island. Anyone visiting without a car should probably stick to Horta as this is where the tour companies and taxis are based.

From Horta, you can get the ferry to Pico or Flores, and Horta Airport is just a short drive away.

Formed after a volcanic eruption that took place between 1957 and 1958, Capelinhos is one of the most interesting places in Faial.

The black terrain looks like something from another planet. You’ll get some fantastic photos of the landscape.

There’s a lighthouse, which you can climb up, and a museum which describes the history and explains how Capelinhos was formed.

There are lots of extinct volcanoes around the world, but they don’t always look like a former volcano. Caldeira does.

It’s incredibly beautiful, green, and dramatic, especially if you can get the right weather. Caldeira is often covered in fog, particularly early in the morning. This is a good reason to rent a car – you can always come back if you don’t manage to get a good view.

For those that like walking, you can walk around the edge of the volcano entrance. It’s also the starting point of the “10 Volcanoes” walk which finishes in Capelinhos.

Explore the artwork at Horta’s Marina

Horta Marina is one of the most colourful marinas in the world. Whenever sailors arrive there, they each paint a rectangular image onto the pier. It’s sort of a middle class form of graffiti.

Having opened in 1986, the marinha is now home to hundreds of these pictures – many of which have been updated when sailors returned a second or third time.

Fofas do Faial are a type of pastry made with egg yolks, milk, sugar, lemon peel, and fennel. They’re very aromatic, but also surprisingly difficult to find on Faial.

Ask in any of the cafés and they’ll know what you’re talking about, but they probably won’t have them and won’t know where you can get one.

Faial is a popular destination for sailors crossing the Atlantic and, over the years, Peter Café Sport (or Peter Bar) has become known as the place to stop for a drink.

Gin and Tonic is normally the drink of choice. Peter Bar is known for whipping up particularly good ones, and the rumours definitely don’t lie.

Unless you’re on Pico, the nearest island to Faial, flying is the easiest way to get here.

As well as internal flights from other islands like Sao Miguel, Terceira, Corvo, and Flores, there are also flights from Lisbon to Horta, so you can fly here directly.

Flights from other Azores islands are operated by Azores Airlines. Several airlines offer flights between Lisbon and Horta, including Azores Airlines and TAP, so it’s worth using a flight comparison website like Skyscanner to see which is best for your trip.

There are ferries to Faial from Pico and from Flores. Pico is incredibly close to Faial – just 30 minutes on the ferry – while Flores is further away (roughly a 9-hour journey time). It’s also important to note that the Flores (Lajes) to Faial (Horta) ferry doesn’t go every day, so you may need to fly.

Ferry tickets can be booked at Atlanticoline.pt

The best way to get around any of the islands on the Azores is to rent a car. Public transport is quite limited and often doesn’t go to the tourist attractions anyway.

The majority of these companies are listed on comparison sites like RentalCars.com and Skyscanner.net, but sometimes some of the smaller companies aren’t.

Several tour companies operate on Faial and will take you to all of the main attractions, including Capelinhos and Caldeira.

Booking a full or half-day tour is usually enough to quickly see all of the main attractions on the island, and this is usually the most cost-effective way as well.

Tours can be found on Viator, including this half-day tour run by researchers and biologists who work in conjunction with local universities and research centres.

You can book a taxi to just about any of the attractions on Faial. Rather than working on a meter, taxis on Faial normally have a commonly agreed price list. This way, you know exactly how much the journey will cost.

Tip: It’s a good idea to take the phone numbers of several taxi drivers, particularly if you’re hiking and need to get picked up from the end of a route. Sometimes it can take a while to get through to one of the drivers.

There is a bus service on Faial, and it does stop at Horta Airport as well.

It’s probably not the best place to learn to ride a scooter, however. The roads are bendy, and drivers on Faial take the corners extremely fast.

If you are experienced, and your driving licence and travel insurance allow you to ride a scooter in Portugal, the following companies offer bikes for rent:

Pico is the closest island to Faial – just 30 minutes by ferry – and São Jorge is next to that. If you haven’t visited either of those two islands, it’s worth visiting both of them.

It’s also worth considering both São Miguel and Terceira, if you haven’t been to them already. They’re two of the largest and most popular islands on the Azores, and both have quite a lot to do. They also both have good flight connections to other islands on the Azores and to mainland Portugal. Of course, Faial also has flights to Lisbon.

If you’ve already seen all of those islands, or have plans to visit them later on your trip, it’s a good opportunity to head over to the Western Azores islands of Flores and Corvo.

Flores, being the largest and closest of the two, is the easiest to get to, as there are normally both flights and ferries to there.