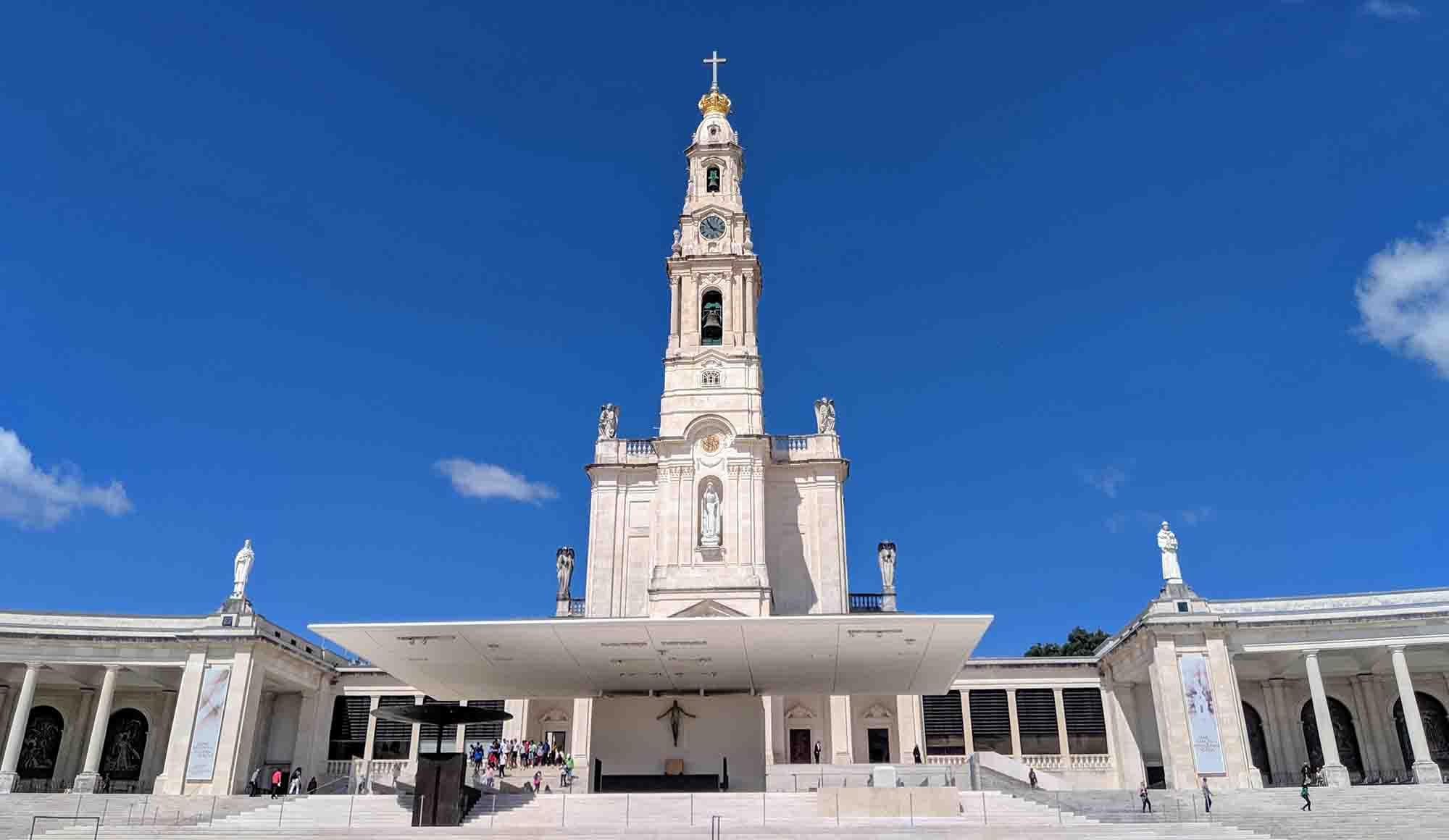 Although Fátima is a small city that existed long before it became a spiritual destination, when most people think of Fátima they think of the Sanctuary of Our Lady of Fátima. The sanctuary attracts somewhere between 5 and 8 million visitors every year, most of whom are deeply religious but also many who are spiritual or just curious to see this world-renowned religious destination. 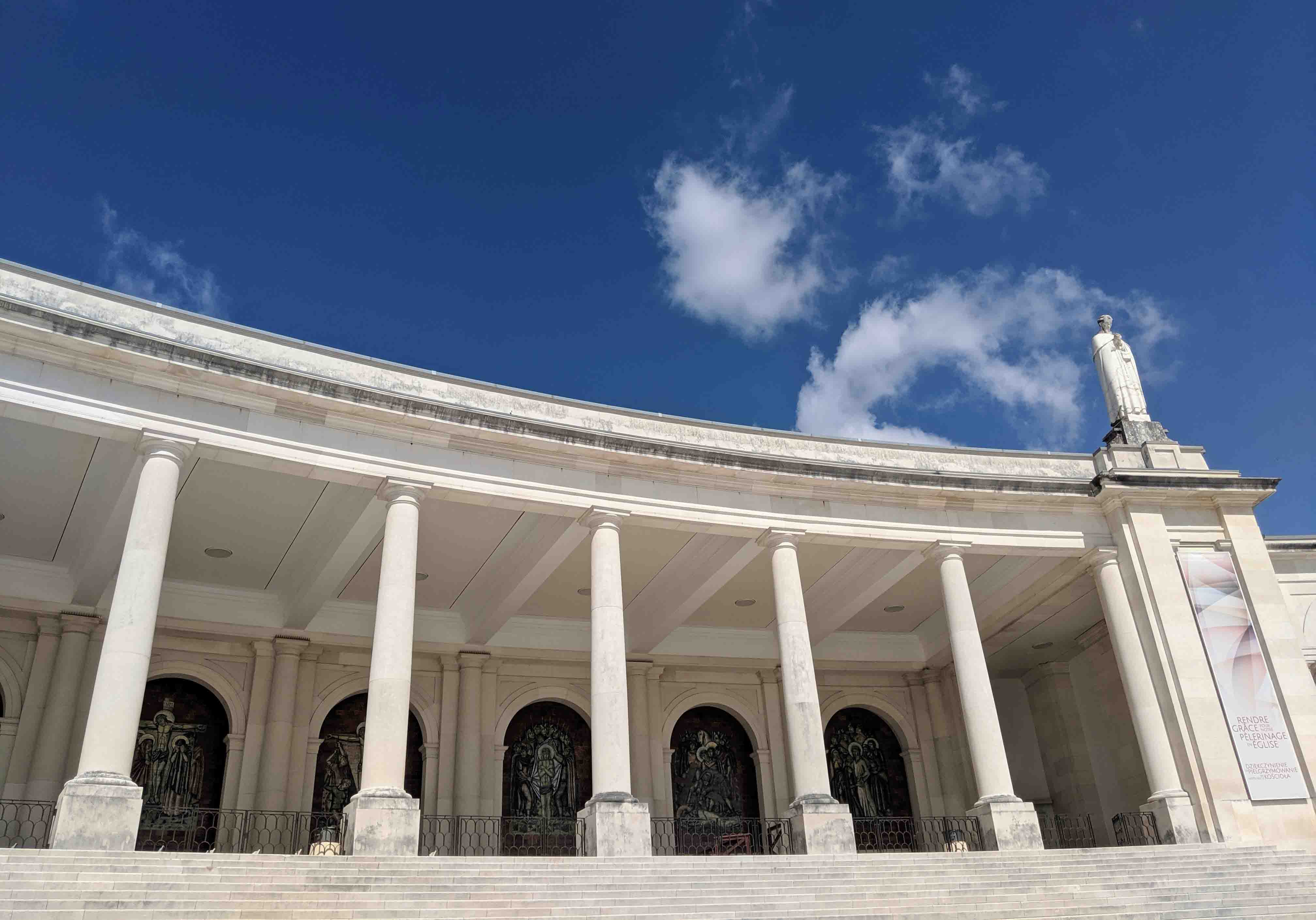 Fátima is unique: it’s an entire town that’s dedicated to Catholicism. It has chapels, shops selling religious gifts and souvenirs, and the almost non-stop sound of mass being said. 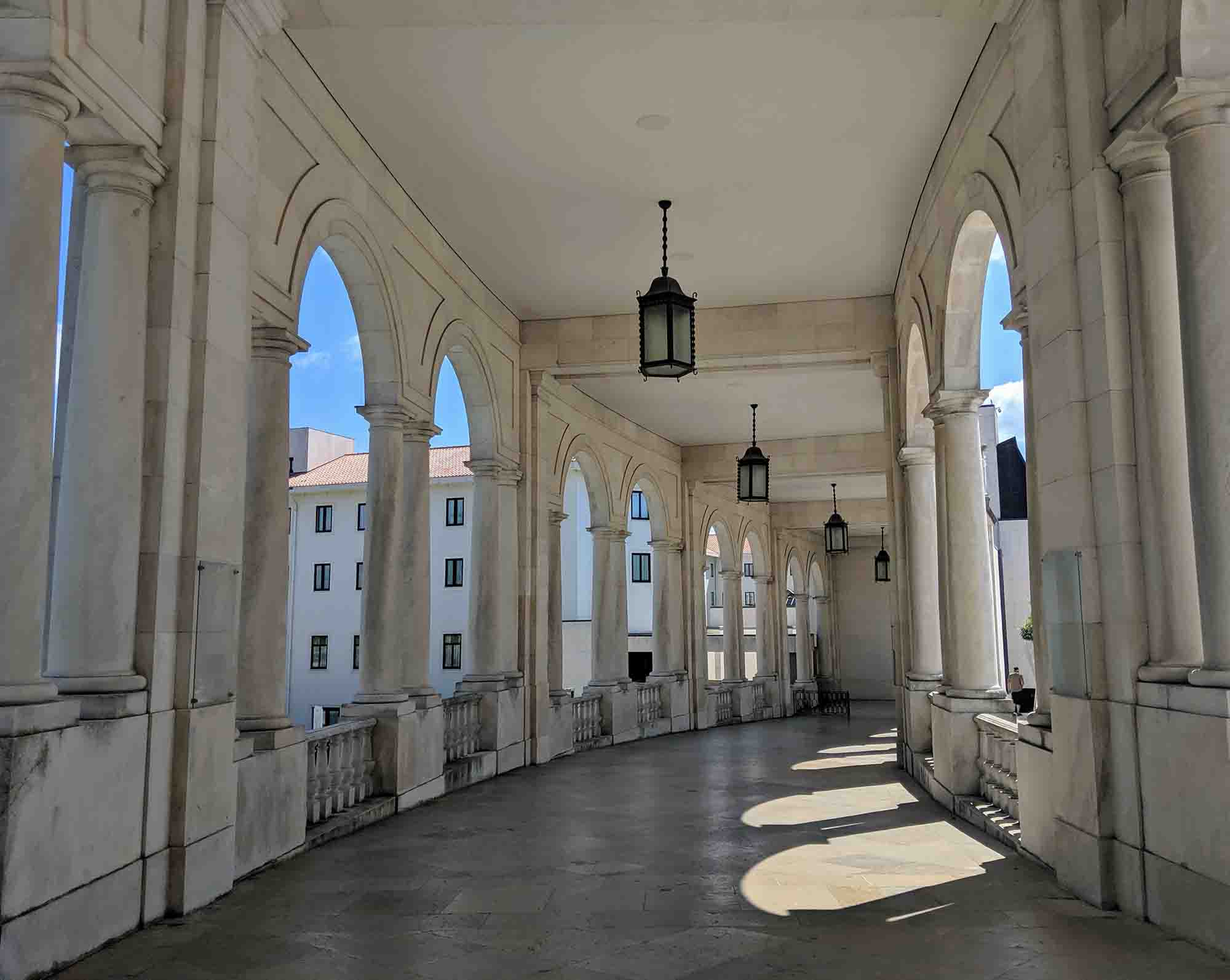 A lot of people that visit Fátima do so on a day trip from Lisbon, but there are plenty of hotels, guest houses, and other accommodation options if you want to spend the night here. Other people even take a pilgrimage to Fátima, typically following one of the four main routes that go across different parts of Portugal. 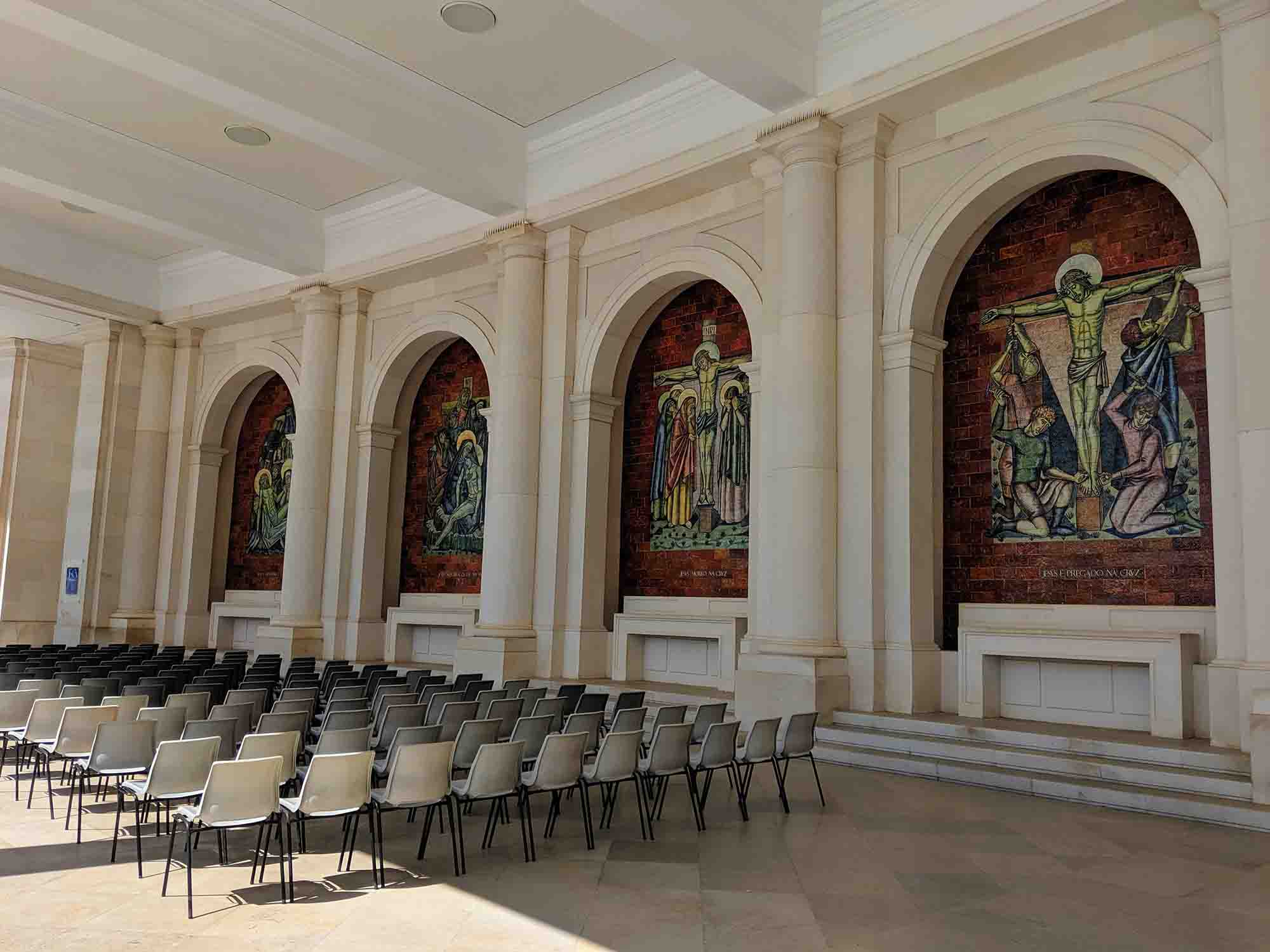 Staying in Fátima? Take a look at these accommodation suggestions or see more options below.

The story of Fátima 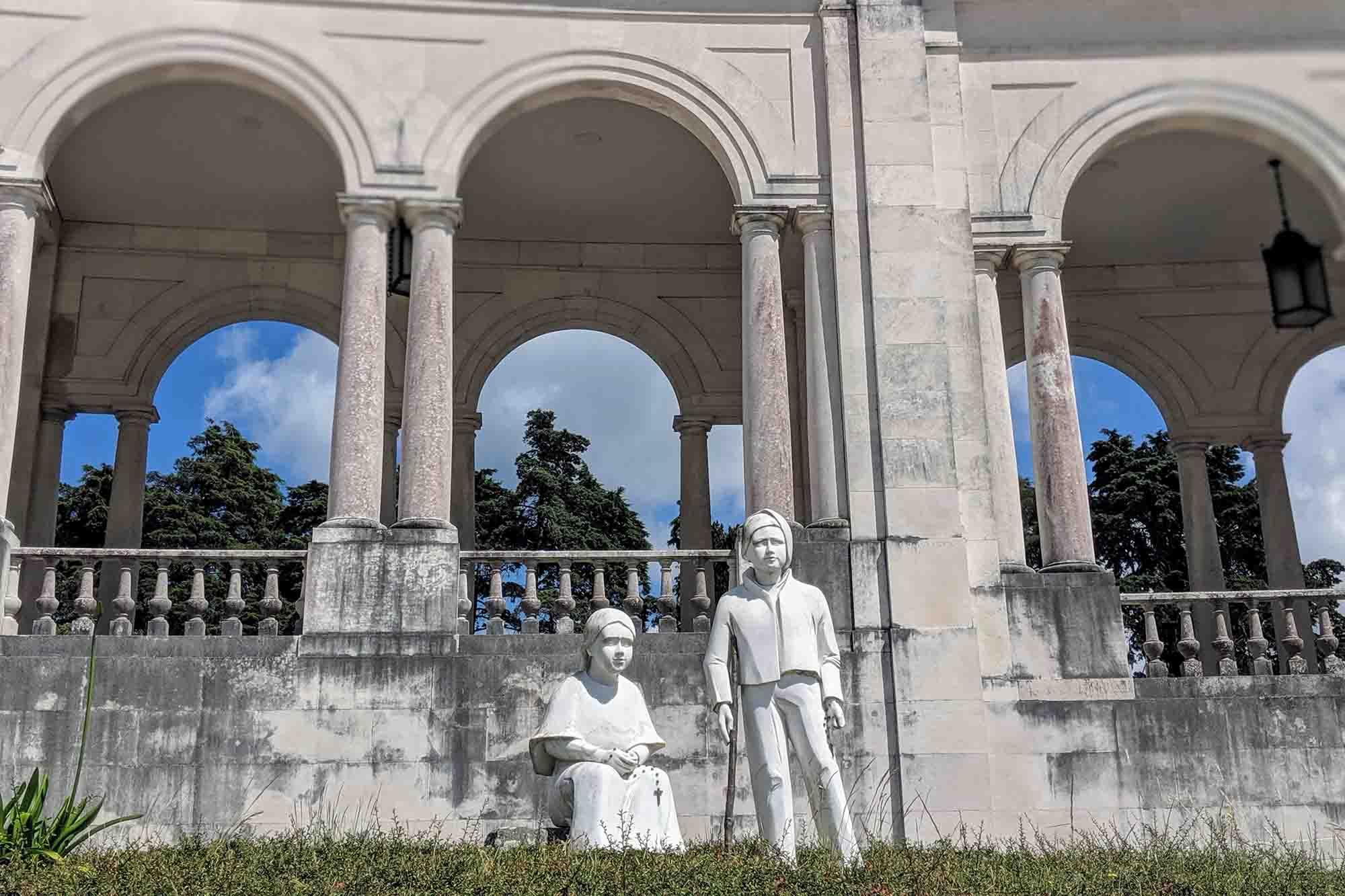 If you don’t know the story of Fátima, it’s worth reading about it so you can appreciate how this small town became such an important destination for Catholics. If you already know it, you can skip down to the rest of the article which lists some of the things to see and do in Fátima.

On May 13th 1917, three children (Lúcia, Francisco, and Jacinta) were walking home from tending their sheep near Fátima when, according to their stories, the Virgin Mary appeared to them. Lúcia was the only one to speak to the Virgin Mary who told her that she, the Virgin Mary, would reappear to them on the 13th day of every month for the next 6 months.

Naturally, a lot of people didn’t believe the childrens’ story at first, but, as the months went on, more and more people started to. By the final appearance, on October 13th, it’s estimated that there were crowds of around 70,000 people gathered around the children.

The Fátima apparitions had become such a big story within Portugal that at one point the children were kidnapped, interrogated, and threatened that they would be “boiled in a pot of oil” if they didn’t admit that they were lying. Many people told them to just give in, but they remained strong and were eventually released.

During her apparitions, the Virgin Mary told them to pray the Rosary every day. She also urged people to repent, told them to build a chapel on the site, and shared three secrets with them.

The three secrets of Fátima

The three secrets are part of what has made Fátima so famous. The first two secrets were revealed to the church at the time, and then in 1941 were publicly revealed in Lucia’s memoirs.

The third secret, however, stayed secret. Lucia didn’t even reveal it to the Vatican until 1960 despite being asked to do so by the Bishop of Leiria in 1943. Instead, she wrote it down and placed it in a sealed envelope with instructions that it wasn’t to be opened until 1960.

It caused a lot of speculation, especially as the contents were considered to be far worse than the first two. Considering the second vision predicted WWII, most people assumed that the third secret spoke about the end of the world. Unfortunately, despite speculation, the Catholic Church kept quiet.

So great was the suspense that, at one point, a former monk hijacked an Aer Lingus flight and, rather than demanding money and a getaway helicopter, he simply demanded that the Pope reveal the third secret.

In 2000, Pope John Paul II publicly revealed the third secret which spoke of the 20th century persecutions of Christians which he believed also referred to the assassination attempt on his life. Even Cardinal Karl Ratzinger, who later became Pope Benedict XVI, said “will probably prove disappointing or surprising after all the speculation it has stirred.”

The Miracle of the Sun

During the final apparition on October 13th 1917, in which 70,000 people were gathered, many people reported that the sun “danced” around the sky, a phenomenon that is referred to as “the miracle of the sun” or “the miracle of Fátima.”

Fátima isn’t the only place where the Virgin Mary is believed to have appeared – it’s not even the only place in Portugal – so why did Fátima become so famous? There are at least three reasons.

1) Recognition from the Catholic Church

The first is that the Fátima events were declared worthy of belief by Bishop José Alves Correia da Silva on the 13th October 1930. The events have also been supported by a number of Popes (Pius XII, John XXIII, Paul VI, John Paul I, John Paul II, Benedict XVI and Francis) which is unusual as the Vatican is normally cautious about officially recognising miracles or apparitions.

Of the thousands of apparent apparitions, only a few hundred have been investigated by the Catholic Church, and, of those, only 12 have been verified and given ecclesiastical approval.

Another reason is that “the secrets” that were shown to the three children had a sensationalist quality that not even Dan Brown could have dreamed up. It caused a lot of speculation and interest in Fátima, and meant that Fátima became incredibly well-known – especially because the visions were kept secret for so long (the 3rd secret was only publicly revealed in the year 2000). 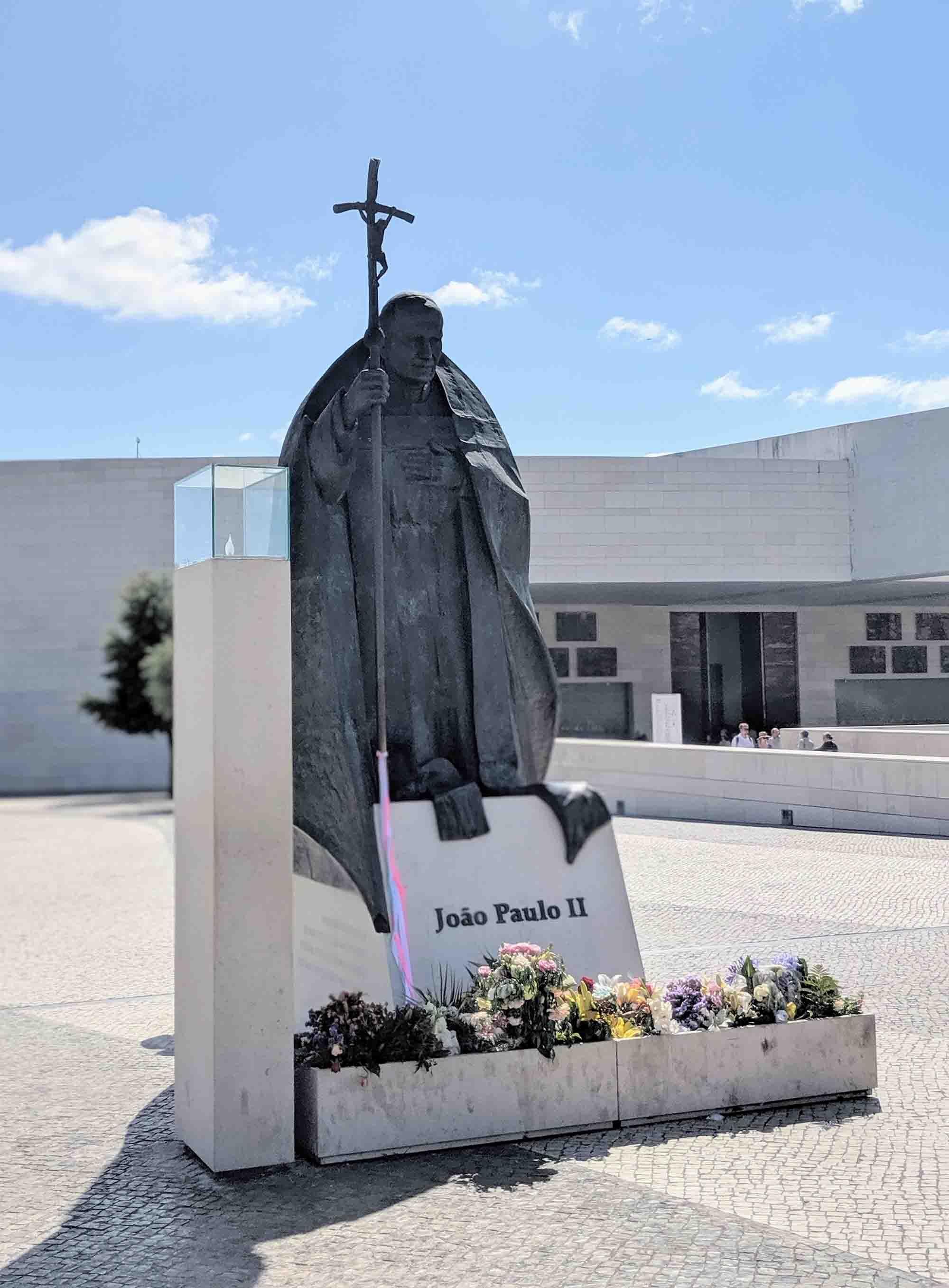 Finally, following on from that point, Fátima holds a special place with Pope John Paul II who believes that, among other things, the third secret predicted his attempted assassination attempt which took place on May 13, 1981 (64 years after the first apparition).

Interesting fact: Pope John Paul II later donated the bullet to Fátima and it’s now a part of the crown of Our Lady of Fatima. This crown is known as the “special crown” and it’s only used for peregrination anniversaries and special occasions.

Tip: If you want to see the crown, you can see it in the Chapel of the Apparitions (Capelinha das Aparições).

Fátima is well connected to the rest of Portugal, and it’s normally very easy to get there particularly from Lisbon.

You can get to Fátima by coach from almost any city in Portugal, and there are usually direct buses from major cities like Lisbon, Porto, and Coimbra. Buses can be booked through Rede Expressos.

Alternatively, you can visit Fátima as part of a tour. Some of these tours also go to other nearby cities like Batalha, Nazaré, and Óbidos, so would allow you to see more if you didn’t want to spend the entire day in Fátima.

If you don’t plan to stop in Lisbon or Porto, and want to go directly to Fátima by bus, follow the instructions below.

The downside to driving to Fátima is that parking can be very difficult. It’s almost impossible to find a non-paid parking spot (although parking isn’t terribly expensive) but the bigger problem is actually finding a parking space in the first place (especially in the summer months).

It’s possible to get an airport transfer to Fátima from any airport on mainland Portugal using a company like Welcome Pickups.

As it’s the closest airport to Fátima, Lisbon Airport is normally the cheapest airport to get a transfer from: transfers from Porto Airport, for example, are typically around 33% more expensive.

Another way to get to Fátima is to walk there as part of a pilgrimage (see below). 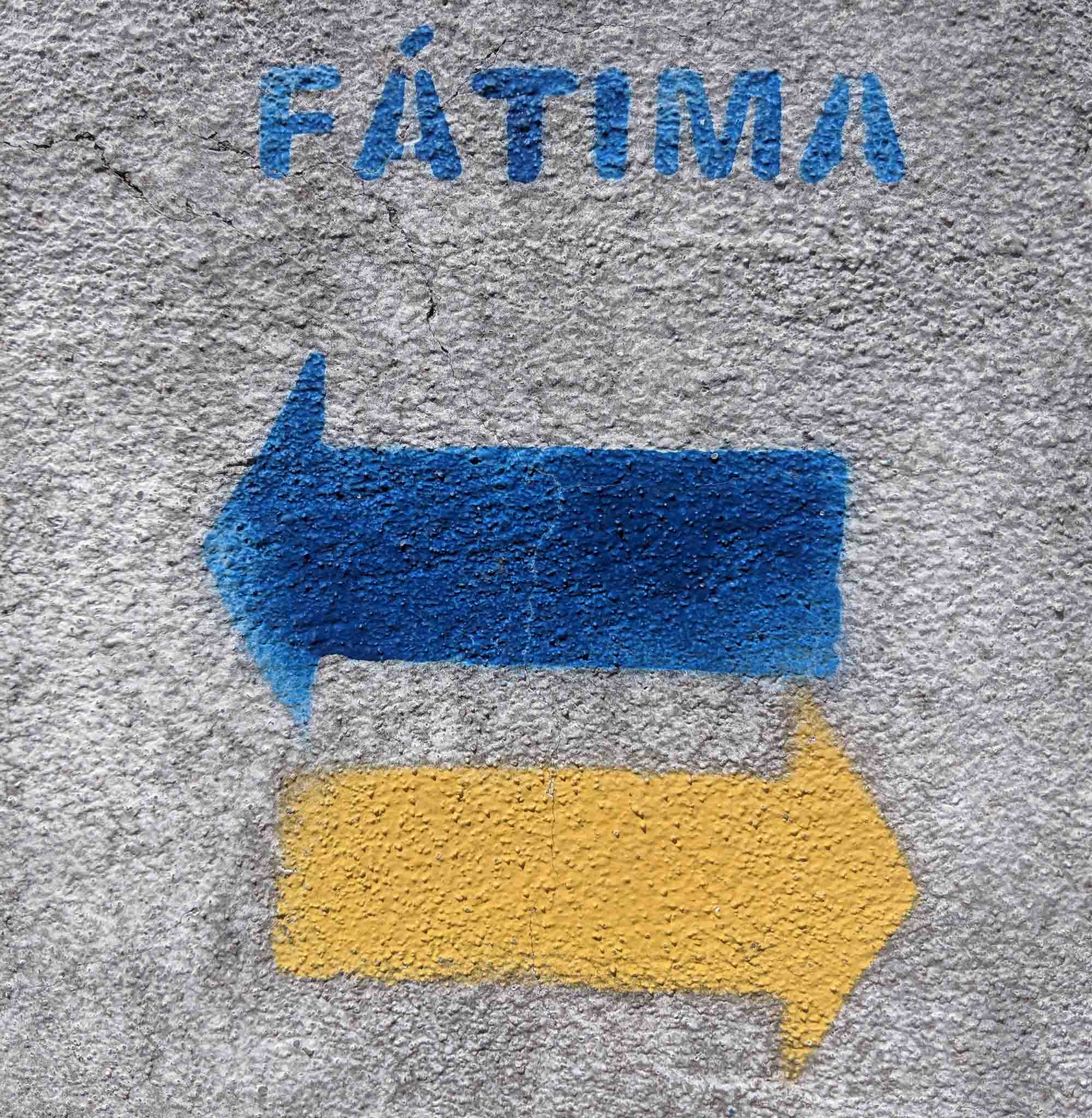 Every year, people travel to Fátima as part of a pilgrimage. While you can take a pilgrimage to Fátima at any time of the year, the most popular times to visit are May 13th and October 13th (to coincide with the anniversary of the first and last apparition).

There are four main routes or ways that are marked with blue arrows: the Tagus Way, the Northern Way, the Nazaré Way and the Carmelite Way.

Alternatively, if you don’t have time to walk one of these routes, you could walk the “Caminho dos Pastorinhos,” a 3 km walk that connects Aljustrel, where Lúcia, Francisco e Jacinta lived, with Fátima.

Note: you’ll see many pilgrims do the final approach on their hands and knees.

What to eat in Fátima 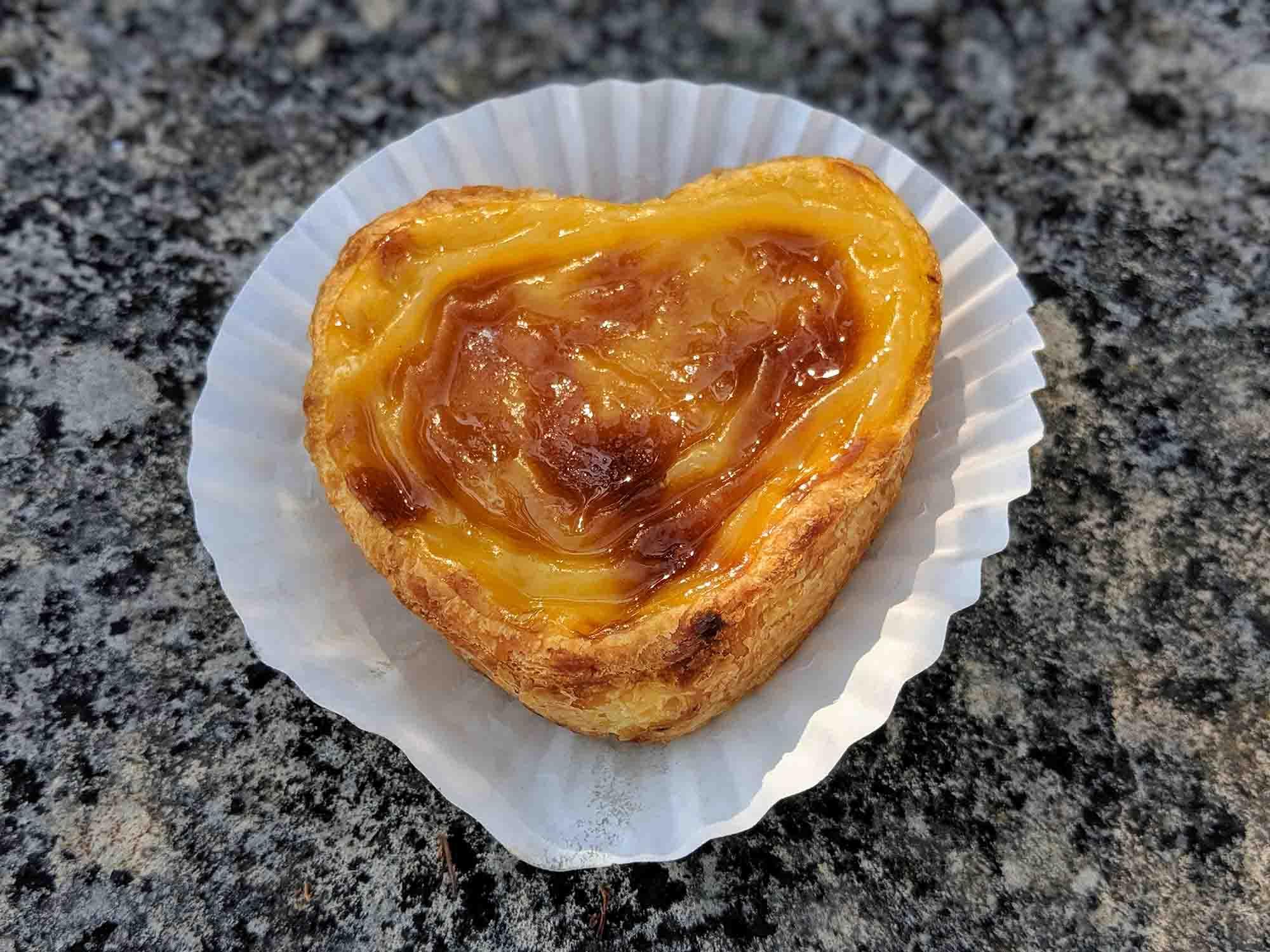 I asked in one of the pastelarias whether or not Fátima had its own regional cake. “Not really,” he said. “The woman in A Casa dos Pastéis de Fátima says that pastel de Fátima comes from here, but really it’s just a pastel de nata with a different shape.”

I went into A Casa dos Pastéis de Fátima and asked whether it tasted any different to the pastel de nata, and got a sour look from the woman behind the counter. She may have even turned to look in the direction of the pastelaria that I just came from.

I ordered one and, I have to say, the guy was right. Sure, it’s slightly sweeter and there’s more custard but really it’s just a pastel de nata that’s shaped like a heart.

The following are some of the most frequently asked questions about visiting Fátima.

Do I need to cover up in Fátima?

There doesn’t seem to be a strict dress code in Fátima, especially in comparison to churches in Italy, but it’s probably a good idea to dress as respectfully as possible.

I did see a lot of men wearing shorts, particularly those that had arrived by way of a pilgrimage, although the men that were attending services were almost all wearing trousers or jeans.

The women did seem to be more covered, with most wearing long dresses, but there were definitely a few that were wearing shorts.

Is there anywhere where I can store my luggage?

Is Fátima worth visiting if I’m not religious?

That’s a good question. Personally, I think Fátima is interesting to see but, if I only had time to visit a few places in Portugal, I would probably visit somewhere else instead. Tomar, for example, is just 40 km away, is very beautiful and has the very interesting Convent of Christ.

One Fátima attraction that I anyone, regardless of their religion or spirituality, can enjoy is the Caminho dos Pastorinhos (little shepherd’s way). Like just about everything else in Fátima, this is a religious attraction (it’s the route that the shepherd girls walked between Aljustrel and Fátima) but, despite the religious factors, the fields and olive trees and stone walls are so beautiful and so peaceful that I think everyone will be able to get something from it.

What’s the nearest airport to Fátima?

Lisbon Airport is the nearest airport to Fátima. A bus from Sete Rios bus station to Fátima takes just 90 minutes (tickets are available from Rede Expressos).

What really happened at Fátima?

Who am I to say? All I can tell you is that I’m pretty sure that the Pastel de Fátima is really is just a heart-shaped pastel de nata.