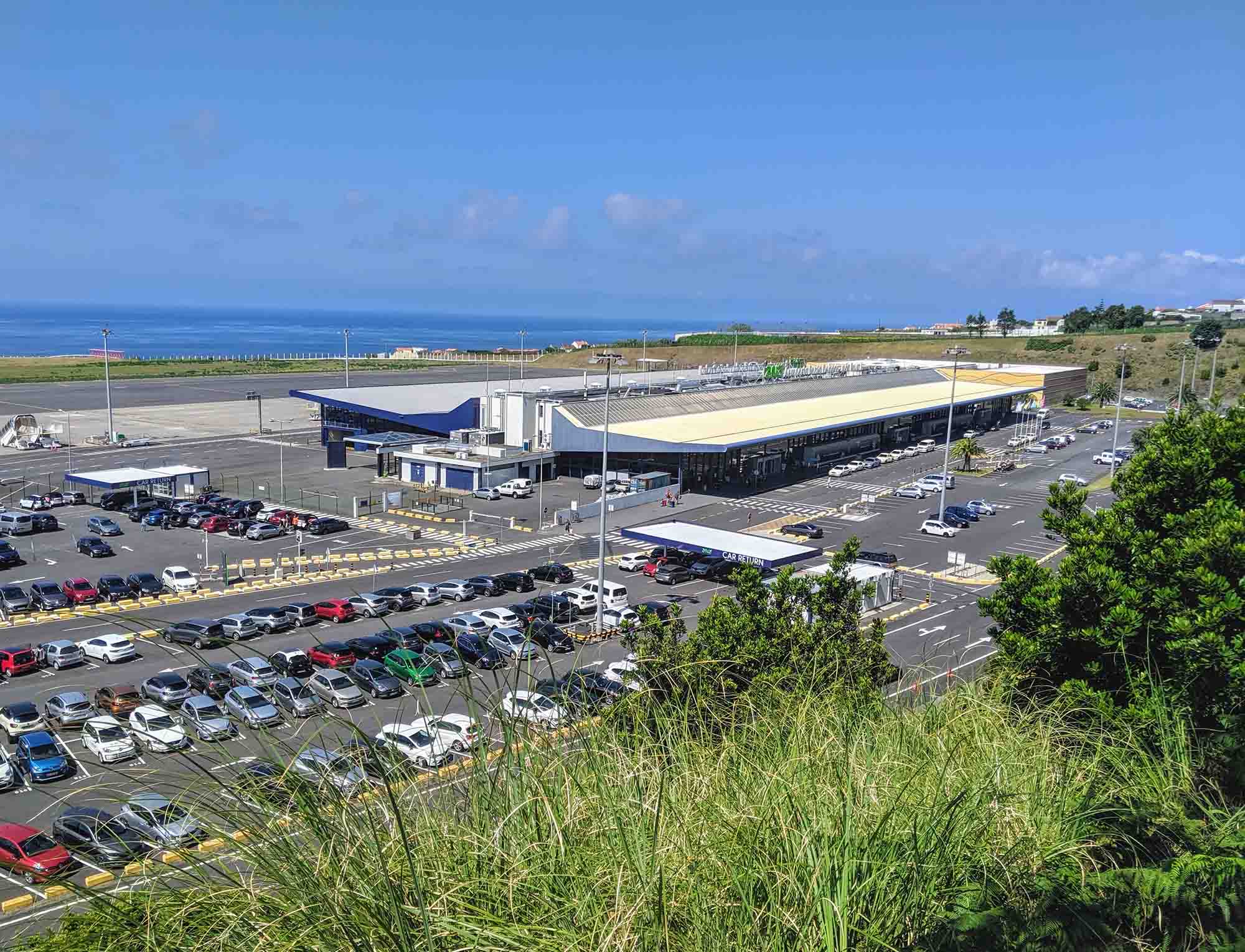 João Paulo II Airport (or Ponta Delgada Airport) is the airport for São Miguel and the main airport for The Azores. As well as flights to all of the other islands on The Azores and Madeira, it also offers flights to mainland Portugal (Lisbon and Porto) as well as to international destinations like Belgium, Germany, the UK, the USA, and Canada.

Despite being the largest airport on The Azores, this is still quite a small airport. It’s small enough that Arrivals and Departures are on opposite sides of the same building and you can walk from one to the other in about 15 seconds.

Start your search with the car rental comparison sites like rentalcars.com. There you can compare prices from local companies like Ilha Verde, Autatlantis, and Way2Azores, as well as international brands like Hertz, Europcar, and Thrifty.

I rented a car with Ilha Verde, who are probably the largest and most popular car rental company on The Azores, although Autoatlantis was probably a close second. This does mean that the queue for their desk can get long, so try and get to the desk as quickly as possible after your flight landing.

If you can’t find what you’re looking for on rentalcars.com, try Skyscanner.net and, failing that, here’s a list of all the different car hire companies that you’ll find at Ponta Delgada Airport.

A few tips for renting a car at Ponta Delgada Airport

There are a few accommodation options that are located close to the airport if you don’t want to stay in Ponta Delgada:

If you don’t drive or just don’t want to hire a car, you can also get into Ponta Delgada or other destinations on São Miguel by taxi, airport transfer, or bus.

Taxis are available from outside Arrivals, and a 1-way trip from the airport to Ponta Delgada’s historic centre costs €7 with luggage and €9 without (as of July 2019). There is a laminated list of taxi prices next to the taxi rank, and all of the taxis follow those fixed prices so there’s no need to haggle.

Uber and other taxi apps are not currently available on São Miguel or the rest of The Azores.

Although you can book airport transfers through sites like Rideways.com, Kwiktaxi.com, and hoppa.com, they’re typically €20-30, which is more expensive than just getting a taxi from outside of the airport.

If you’re travelling with young children you may want to book an airport transfer just so that you can book a child seat, though. Kwiktaxi.com allow you to request child and booster car seats for €4.

There doesn’t seem to be an airport bus anymore.

If you’d like to hire a driver rather than rent a car, Ilha Verde offer a chauffeur service.

Layovers at Ponta Delgada Airport are not uncommon both for transatlantic flights and for flights within the Azores: sometimes, to fly from one island to another, you have to go via São Miguel. Depending on how long your layover is, you may have time to see a little of the island.

For layovers of just a few hours, the easiest thing to do is to get a taxi from the airport into Ponta Delgada. João Paulo II Airport is situated around 5 km outside of Ponta Delgada, and the journey takes around 10 minutes by car.

All of the taxis at the airport charge the same rates, and those rates are displayed on a laminated sign at the taxi rank outside of Arrivals. In July 2019, a 1-way trip to Ponta Delgada historic centre cost €7 with luggage and €9 without. Larger taxis (taxivans) cost 25% more, so €8.75 and €11.25.

Obviously, you can also get a taxi from the airport to any of the destinations listed.

If your layover is longer, you might have time to take the Yellow Bus to see some of the lakes and other attractions that São Miguel is famous for. Excluding time for getting off, the tours typically take 1 hour and 50 minutes and you also need to allow time to get to and from the starting point in Ponta Delgada.

Alternatively, you could rent a car from one of the many car rental companies mentioned above and go visit some of these attractions yourself.