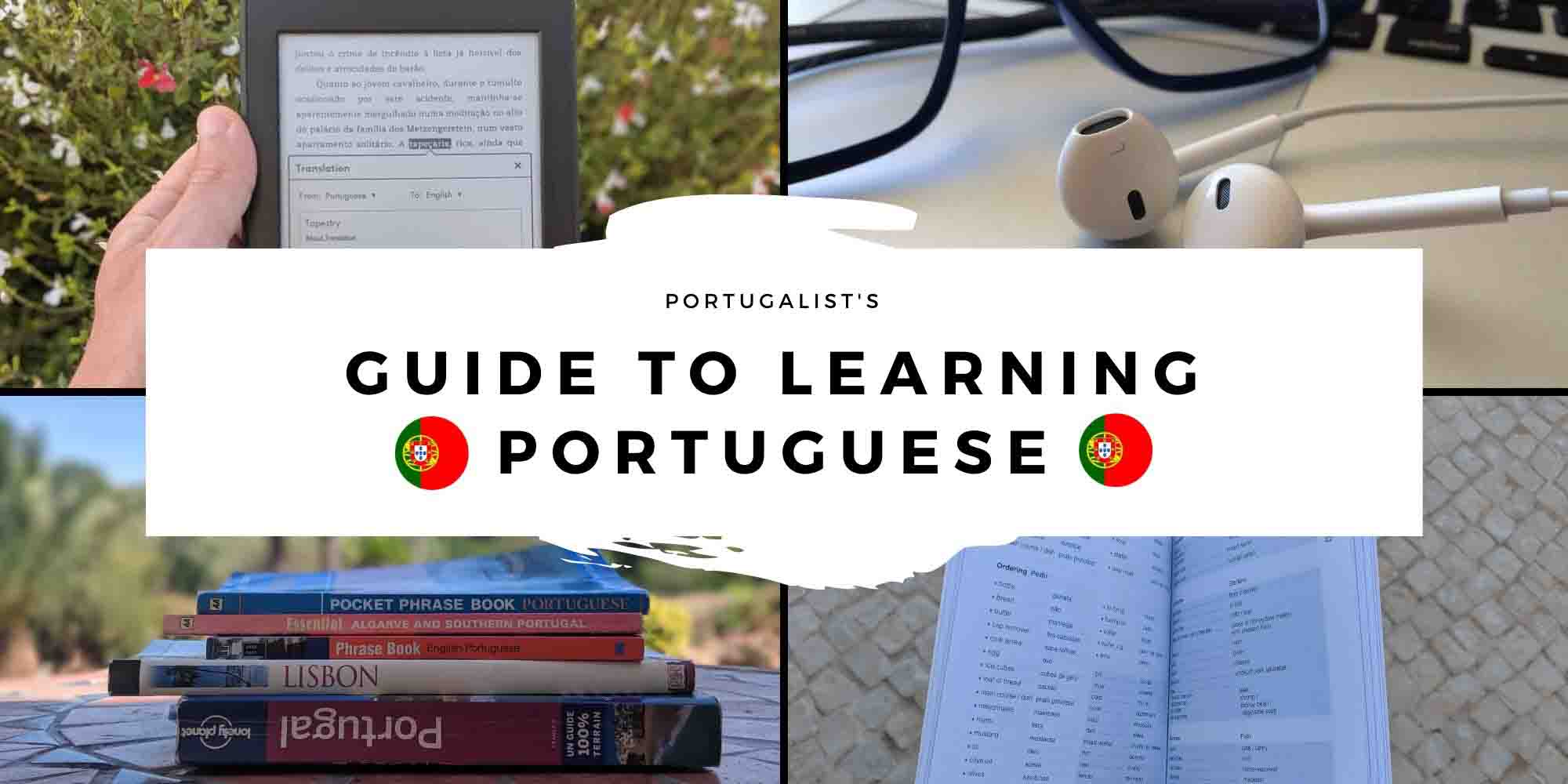 Regardless of your reasons, congrats! The Portuguese language is an incredibly beautiful language, and an incredibly underrated one too.

This article covers all levels — from absolute beginner right up until the very advanced levels. It mainly focuses on self-study, but there is some discussion on group classes and courses as well.

Here are the three main things that’ll get you from beginner to confident speaker.

The beginner stage covers everything from knowing absolutely zero words of Portuguese to a pre-intermediate level where you’re able to hold basic conversations (often with a few mistakes).

Some courses call themselves a beginner’s course, while others will say that they’re either A1 or A2 (or both) which are the beginner levels on the CEFR scale.

The following courses all cover beginner’s level (A1/A2) Portuguese. While it is possible to find A1 courses, because it’s such a basic, survival-level introduction to Portuguese, many courses will combine the A1 and A2 together.

Note: If you’ve already been living in Portugal and have picked up some Portuguese, you might be able to jump in at A2 level. Take a look at the syllabus for the A1 courses and see if you have covered the grammar concepts: many people pick up vocab and phrases but it’s rare that people pick up grammar.

An introduction to European Portuguese from Mia Esmeriz, a veteran Portuguese teacher from Porto with 10+ years’ experience and a masters in teaching Portuguese as a foreign language.

The course is taught through a series of 40-60 minute videos that emulate a classroom setting and focuses primarily on Portuguese grammar and vocabulary. Unlike apps or a course like Michel Thomas Portuguese, there isn’t a lot of interaction in this course but the lessons are broken up by small games and quizzes. There are helpful accompanying PDFs which repeat everything covered in the video lessons. There is also a discussion area where you can ask Mia all of your questions.

Portuguese Master Course covers both A1 & A2 EU Portuguese, as well as B1 and B2 Portuguese as well. There are also other add-on courses that specialise in things like pronunciation and listening.

As mentioned, the course is strongest on vocabulary and grammar. While there is some reading and listening, it’s likely you’ll need other materials to complement this course.

A popular course for beginners to early intermediate that covers grammar in a very digestible way, this course always has very strong feedback from users. Although the course doesn’t correspond to a level on the CEFR scale, it’s estimated that it covers both the A1 and A2 as well as some of the B1.

There is a strong emphasis on pronunciation and plenty of vocabulary is included, but this is essentially a grammar course. Other areas like reading, listening, and speaking, you’ll need to work on yourself.

Pimsleur’s European Portuguese could be seen as a more basic version of Michel Thomas Portuguese. It does a great job of simplifying basic Portuguese (roughly A1 level) and building confidence in the people who use it, but it only takes you so far.

As this is an audio-based basic grammar and vocabulary course, you’ll need other materials for reading, listening, speaking, and everything else.

Portuguese Lab Academy is a learning platform that combines multiple different methods including short stories, games, dialogues, and grammar. The platform covers both A1 and A2 (beginner’s level) as well as B1 and B2 (intermediate level).

As well as a course, the following resources are worth having in your beginner toolbelt.

Intermediate, and especially upper intermediate, is really the level to aim for with your Portuguese (especially B2). It’s at this level that you really begin to feel more comfortable speaking and listening to Portuguese and holding conversations that go beyond basic introductions (e.g. how many brothers and sisters do you have? Can you describe all the rooms in your house? Boring!)

The following courses all cover intermediate Portuguese, which is B1 and B2 on the CEFR scale.

The B1 and B2 levels of Portuguese Master Class follow the same format as the A1 and A2 levels. Each video lesson is roughly 40-60 minutes long, and includes a mixture of grammar, vocab, and expressions.

The B1 and B2 can be purchased separately, but it’s slightly cheaper if you purchase the two together as a bundle (or the 4-course A1, A2, B1, and B2).

As with the A1 and A2 levels, the B1 and B2 levels of Portuguese Lab use a mixture of multimedia types (including audio, reading, and quizzes) to create a varied interactive learning platform.

As well as the additional resources mentioned in the beginner’s section, the following resources may also help you progress at the intermediate level. It is, however, worth highlighting Practice Portuguese and iTalki as two very useful resources for this level — iTalki for conversation practice and Practice Portuguese for Audio and the learning studio (vocab, grammar).

At the average level, you’re much more capable of reading complex texts and discussing complex subjects in both social and professional settings. Most language learners end up plateauing at the intermediate level so you’ll be well above average if you can progress to this level.

While learning foundational and intermediate Portuguese was challenging, in some ways it’s much harder to progress once you reach an advanced level of Portuguese.

Unfortunately, there aren’t a huge number of resources at the advanced level, and most are Portuguese textbooks rather than online courses.

Tip: If you haven’t already taken an exam in Portuguese, it may be worth taking one as a qualification at this level could be a nice boost to your resumé.

Alternatively, if you’d prefer to learn in a classroom setting rather than at home, there are plenty of language schools in cities like Portuguese cities like Lisbon, Porto, and parts of the the Algarve, as well as in major international cities like London, Berlin, and New York as well.

While you’ll still have to do a lot of work by yourself, many people like being part of a group (especially if they’re concerned about their own abilities to self-study).

Even though you’re learning Portuguese from Portugal, it’s still a good idea to familiarise yourself with how Portuguese from Brazil sounds. Yes, even if you aren’t going to Brazil: there are so many Brazilians in Portugal that it’s likely you’ll have several Brazilian friends. You may even end up speaking to Brazilians more than you do local Portuguese people.

Most people are interested in learning either European or Brazilian Portuguese, but occasionally people do ask about Portuguese from other parts of the world. The most common is Portuguese from Mozambique.

There aren’t many resources that cover Portuguese from this part of the world, but “African Portuguese” is very similar to “European Portuguese” or “Continental Portuguese.” Use the resources mentioned above, while also trying to listen to radio or podcasts from Mozambique or Angola.

The best resources for developing your listening skills.

Portuguese from Portugal [Link] – Another podcast with free audio and text, this resources uses text from Wikipedia articles but covers a variety of Portuguese topics like wine, football, and fado.

The best resources for developing your speaking skills.

Italki [*Link*] – Find native speakers that you can take conversational Portuguese classes with.

Forvo [Link] – A dictionary that focuses on pronunciation as well as definitions. While most of the audio clips are from Brazilian speakers, you will find quite a few from Portuguese speakers as well (and it’s useful to hear the difference).

The best resources for developing your writing skills.

HelloTalk [Link] – Improve your Portuguese writing abilities by chatting with native speakers through the HelloTalk app.

The best resources for developing your reading skills.

Google Translate [Link] – An incredibly useful translation tool. While it does use Brazilian Portuguese rather than European Portuguese, it’s usually fine for translating for Portuguese to English but it’s better to use Deepl when translating from English to Portuguese.

As well as a course that has a good focus on grammar, the following tools will help you learn Portuguese grammar.

Linguno [Link] – A fun app that tests you on several things including grammar. [Read Reviews]

Clozemaster [link] – Another fun app with a strong focus on grammar. Note: this app is more skewed towards Portuguese from Brazil.

Conjugemos [Link] – Has several games where you can test your ability to conjugate verbs. It’s much more fun than trying to memorise verb tables!

While some people argue that you should learn vocabulary in context rather than isolation, there are definitely plenty of resources (especially apps) that cover Portuguese vocab.

Memrise [Link] – A free (with paid option) app that has lots of different flashcards covering European Portuguese as well as the option to create your own.

There are other vocabulary apps like Drops or Duolingo (although that technically covers Brazilian Portuguese). If you’re specifically interested in learning via apps, be sure to take a look at Portugalist’s list of the best apps for Portuguese learners.

Don’t Forget to Have fun!

As well as taking a beginner’s course and learning essential phrases, it’s important that you actually get to use your Portuguese and have a little fun (otherwise what’s the point!). Learning a language is hard work, and if you don’t enjoy it you’ll quickly give up or just end up resenting it.

Here are some fun things you can do that’ll help your Portuguese:

If you’re going to be living in Portugal, it makes sense to learn Portuguese as it’s spoken in Portugal. Brazilian Portuguese might be more melodic or easier (even the Portuguese say this) but, even if you learn to speak Portuguese with a Brazilian accent, you’ll still need to be able to understand when Portuguese people are speaking to you.

Should I self study or take a class?

Whichever works best for you! If you’re motivated, self-study can be much more effective than group learning. It can also be cheaper and, without having to commute to a class, less time-consuming as well.

However, the benefit of committing to a class is that you (hopefully) turn up. Sometimes it can also provide you with a social group as well.

How much should you expect to pay to learn Portuguese by yourself?

Initially the cost of the course (~$150 or so per level), but as you start to grow you’ll probably want to add additional resources like Practice Portuguese (great for listening) and iTalki (great for weekly conversation practice).

Don’t worry: there are lots of free resources for learning Portuguese as well!

What do all the levels mean?

While most of us refer to ourselves as being beginner, intermediate, advanced, or maybe having “conversational Portuguese,” that’s a bit vague for language schools and for professional qualifications.

The chart below explains what the different levels on both the CEFR (Common European Framework of Reference for Languages) and the Portuguese version, CAPLE. Generally, most people just use the CEFR scale, though.

The explanations are my own and summarise how the CEFR describes each level.

What level do I need to obtain Portuguese citizenship?

A2, which is lower than many other European countries like Germany and France which require B1-Level.

Sorry, no posts were found.

Read all of the latest articles about learning Portuguese