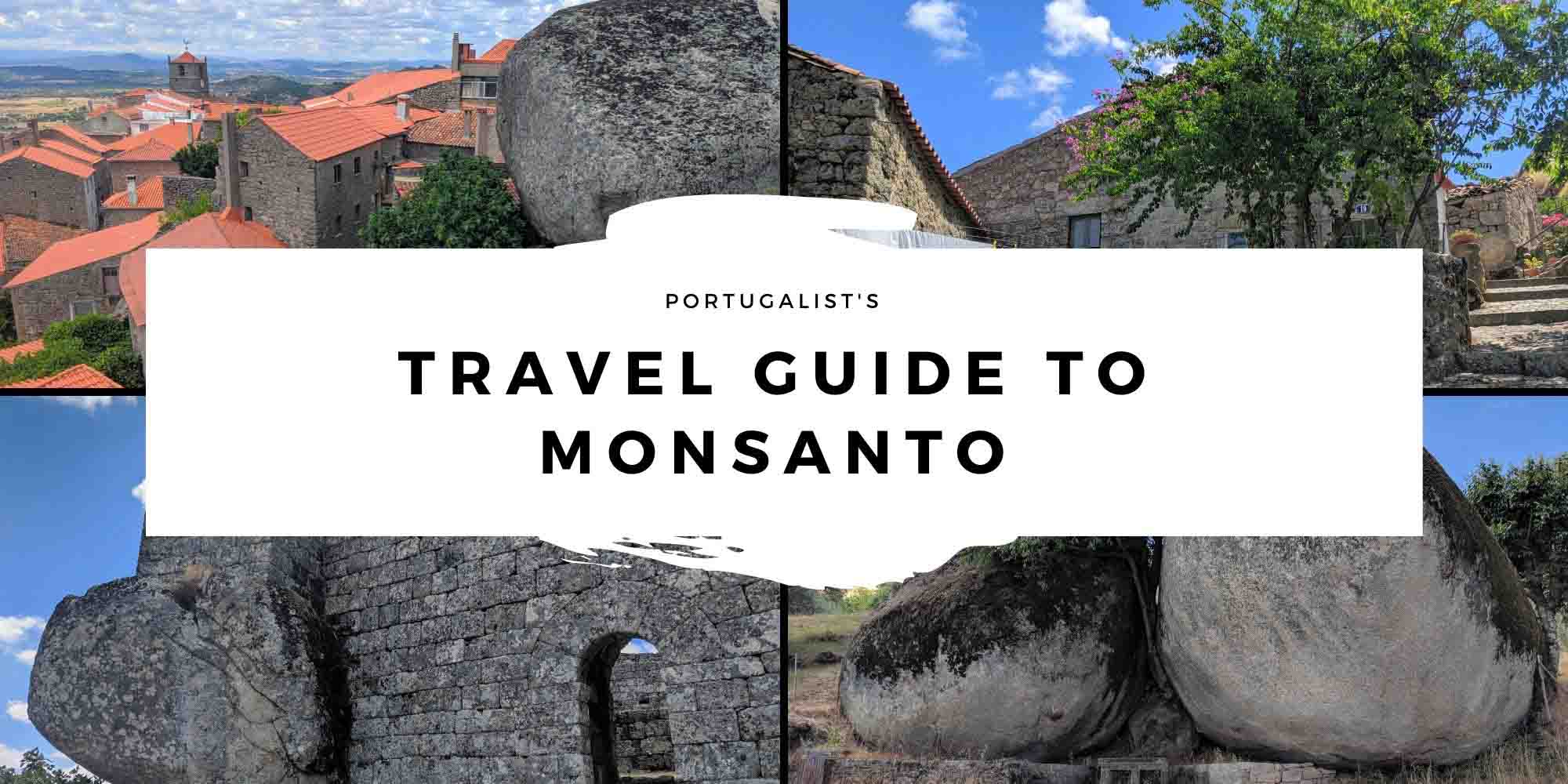 Monsanto is somewhere that has been on my “Portugal bucketlist” for a very long time, and so I was very excited to finally get to see it. It didn’t disappoint – the town was just as magical as it looked in the pictures.

In 1938, Monsanto was voted the “most Portuguese village in Portugal” – a strange title to give a village that looks like absolutely nowhere else in Portugal. But, aside from the unique fairytale-like houses built around giant boulders, the narrow streets and ramshackle buildings do have a very traditional Portuguese village feel to it.

Monsanto actually feels like it was frozen in time and, in a way, that’s sort of what happened. Recognising that this town was particularly special, the Portuguese government prevented the tourism industry from opening up hotels, restaurants, crappy souvenir shops, and everything else that can be found in other parts of the country where they didn’t intervene.

Aside from its obvious visual appeal, one of the reasons that Monsanto was looked after was because it is one of the 12 historic villages of Portugal – an initiative by the government to restore and promote traditional towns and villages that were important to Portugal’s history.

Sitting close to the border with Spain, Monsanto was an important stronghold for the Portuguese kingdom. It was also, very briefly, the home of the Knights Templar for a while.

Surprisingly, Monsanto was fairly quiet when I visited in June. There were other tourists, definitely, but only a handful, which is surprising for a town that looks like it belongs in the illustrations of a fairytale.

Sintra, which is also described as fairytale-like, was definitely not quiet like Monsanto. Then again, Sintra is less than an hour from Lisbon. Monsanto’s nearest city is Castelo Branco, somewhere that’s definitely not on the main tourist trail.

The “most Portuguese village in Portugal” is also one of the most unique villages in Portugal, and it may be somewhere that you want to spend the night.

A hotel comparison site like HotelsCombined.com will bring up the most options and so it’s a good idea to look there, but a few handpicked options include:

There are also a few Airbnbs in Monsanto, but not many. If you’re willing to extend your search outside of the village, you’ll find more properties in the surrounding countryside as well as in nearby villages like Idanha-a-Velha and Penha Garcia.

There are also plenty of options outside. Most of the nearby towns are small like Monsanto. If you want more accommodation options, and a few more restaurants and bars to choose from, you’ll need to head to Castelo Branco.

The best time to visit Monsanto, without doubt, is at the very start of May when the village celebrates the Medieval-style “Festa da Divina Santa Cruz” (Festival of the Holy Cross). On this day, the villagers dress up in historical costumes and walk up to Monsanto Castle singing and carrying marafonas (rag dolls) and a pot filled with flowers.

Expect lots of music, jousting, drumming, dancing, very traditional food, handicrafts, and a parade. One of the highlights of the festival is when the crowd walks up to the castle, carrying a pot filled with flowers.

This pot symbolises a time when Monsanto was under siege, and had been for seven years. The villagers realised they had nothing left but one cow and a bag of grain, and knew that they would have to surrender soon.

But, rather than give in, they decided to try one last thing. They fed the remainder of the grain to the cow and then threw the cow off the castle walls at their attackers. The attackers cut the cow’s stomach open and, seeing how well-fed the cow was, decided that the people of Monsanto must still have plenty of food left and so they gave up the siege.

If you aren’t fortunate enough to be able to visit Monsanto for the Festa da Divina Santa Cruz, aim to visit during Spring or Autumn. You can visit in Summer, of course, but it can get very hot in Monsanto during July and August and there is very little shade from the sun in the town and at the castle.

Considering how unique the town of Monsanto is, the castle was surprisingly normal. While it does make use of boulders in a few places, it isn’t quite as dramatic as it is in the town centre.

The castle has existed in some form or other for many centuries. It was captured by the Romans, Visigoths, the Arabs, and finally by Afonso I of Portugal who took the castle and the rest of Portugal back from the Moorish invaders.

Afonso then donated the castle to Gualdim Païs, Master of the Templar Order in Portugal. The templars worked to rebuild it, but moved to Tomar just a few years after finishing it.

Unfortunately, we’ll never really know what Monsanto Castle was like inside because, aside from a small chapel, all that really remains are the exterior walls. In 1814, there was an accidental gunpowder explosion in the ammunition storage section of the castle which destroyed a lot of the castle.

Located just below Monsanto Castle, is the Capela De São Miguel. Built in the 12th Century,

Although the chapel itself is gated and normally kept closed, you can still see a few of the empty stone coffins outside. You won’t see any skeletons, but many people still find the empty human-sized shapes creepy.

I have to confess that I didn’t know who Fernando Namora was before visiting Monsanto, and I suspect a lot of other non-Portuguese readers won’t either.

I wasn’t able to visit the property; only look at the plaque outside. Still, it is listed as one of the main things to do in Monsanto.

From reading up on him, he does sound like a very interesting character and I can see why they were keen to commemorate that he lived in the village.

Monsanto isn’t the most convenient place to get to in Portugal. It’s located close to the Spanish border, roughly an hour from the nearby city of Castelo Branco.

Fátima and Coimbra, which are much more popular places to visit, are about 2 and 2.5 hours away respectively, while the Spanish city of Salamanca is about 2.5 hours away in the other direction.

Essentially, it’s very out of the way for most people as the majority people that visit Portugal, particularly those that are visiting Portugal for the first time, stick to the western side of the country.

By far, the easiest way to get to Monsanto is by car. If you aren’t travelling by car, there are one or two places that you can rent a car in Castelo Branco (See: RentalCars.com).

It is possible to get to Monsanto by public transport but it definitely isn’t as easy as getting there by car.

There is a direct bus from Lisbon’s Sete Rios station to Monsanto-Relva, but Relva is still around 1-1.5 km from Monsanto. You may be able to get a taxi from Relva to Monsanto, but this isn’t guaranteed. Otherwise, it’s a slightly steep but fairly quiet walk up to Monsanto.

Tickets can be booked at Rede-Expressos.pt

There is also the historical village circuit train, which leaves Lisbon every Saturday and stops in Ródão, Foz do Cobrão, Monsanto, Idanha-a-Velha, and Castelo Branco before coming back to Lisbon.

Space is limited, so it’s recommended that you book in advance (you can book up to 60 days beforehand).

There is a bus from Castelo Branco to Monsanto, which is operated by TransDev Rodoviária da Beira Interior, but this only runs once a day most days. A timetable can be found at TransDev.pt

The times aren’t very travel-friendly so, if you do take this bus, you’ll probably need to spend the night in Monsanto.

3 thoughts on “Monsanto: the Most Portuguese Village in Portugal?”