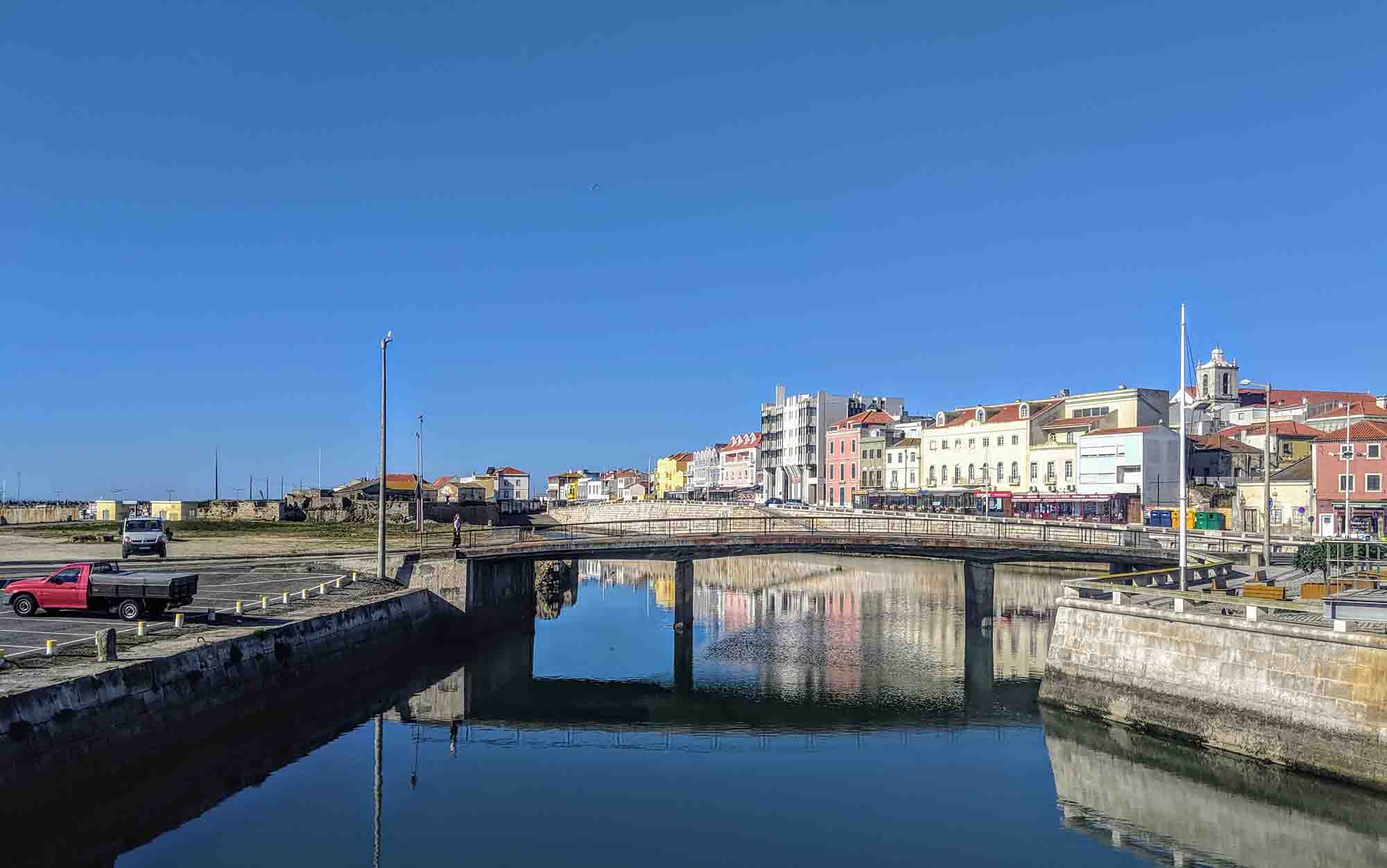 Like many places in Portugal, Peniche began its life as a fishing village and fishing is still a big part of life here. In recent years, however, the Peniche has become more famous for something else: surfing.

Peniche is one of Portugal’s top surfing destinations, for many people, it’s the best, although other destinations like Ericeira, Nazaré, Sagres, and Costa da Caparica all have their fans as well. Even if there are disagreements on which surfing destination is the absolute best, ask anyone what their top three surf destinations in Portugal are and Peniche will almost always get a mention.

There are other things to do here as well. Berlenga Grande, the main and only accessible island in the Berlengas archipelago, is definitely worth a visit, and many people also come here for cycling, hiking, and other types of surfing like windsurfing and kitesurfing.

There’s also the Peniche Fortress, which has a varied and colourful history, that includes everything from military base to political prison, but, generally, the main focus reason to come here is to surf.

There are plenty of great accommodation options in Peniche, from surf hostels to boutique hotels, but here are a few that stood out.

Things to do in Peniche (besides surfing)

Although most people come to Peniche to surf, there are a few others things to see and do here besides getting on your board.

Take a half-day trip to Berlengas Berlenga Grande, the main island in the Berlengas archipelago, is worth visiting to see the Instagram-worthy Fortress of São João Baptista and to swim in the beautiful, clear waters.

Spend a day on one of Peniche’s many wonderful beaches Peniche is home to some very beautiful beaches including Praia do Baleal, Praia de Supertubos, Praia da Gâmboa, and Praia da Consolaçãom and, if you’re already visiting Peniche and have some time to spare, it’s worth spending a day on at least one of them working on that all-important tan.

As great as the beaches in Peniche are, Peniche is probably not somewhere that you would come to purely for the beach. It’s a surfing destination for a reason, and that’s because it’s often incredibly windy here. While that’s great for the waves, if you’re lying on the beach it does mean you’ll get blasted with sand a lot.

Admittedly, windsurfing and kitesurfing are both types of surfing but they’re also different to normal surfing. Praia de Supertubos, Praia da Consolação, and the Lagoon of Óbidos are some of the most popular places to do this.

You’ll find several surf schools in Peniche offering rentals and lessons for beginners, and many trips can be booked through booksurfcamps.com.

Try your hand at stand up paddleboarding

Despite the waves that Peniche is so famous for, it’s also somewhere where you can have a go at stand up paddle boarding (SUP). This is quite a relaxing alternative to surfing that gets you out on the water, and is definitely something worth trying if you haven’t already. Back in the middle ages, Peniche was constantly under attack from English, French, and North African pirates. King Manuel I initially responded by sending armed ships and recommended the construction of a permanent fortification which eventually began construction while King John III was in power.

Initial construction of the star-shaped Peniche Fortress began in 1557 and continued until 1567. From completion until 1897, it served as a military base. Since then it has had an extremely varied history. During the Boer War (1889-1902), it housed South African refugees and, during WWI, it was a prison for German troops. Most recently, it served as a political prison during Salazar’s “Estado Novo” (1934-1974). This is one of the few historical attractions in Peniche, but one that’s definitely worth a visit. You’ll find several different regional cakes and biscuits in Peniche, including “Pastéis de Peniche” and “Amigos de Peniche,” but the regional sweet you’ll see advertised most are “esses.” These are almond biscuits that are shaped like an “s” and they can be found in most pastelarias in Peniche.

Most people visiting Peniche will come from Lisbon, which is just 102 km away. You can drive it in less than an hour and a half and the express bus takes roughly the same amount of time as well.

Several airport transfer companies, like Welcome Pickups, offer airport transfers from Lisbon airport to Peniche. The journey takes a little under 90 minutes in total. It’s not as cheap as taking the bus, but it’s faster and more convenient.

A car is always the easiest way to get around Portugal, particularly if you want to take day trips from Peniche. There are only one or two car rental companies in Peniche so, if you plan to rent a car, it makes more sense to do it at the airport.

The bus from Sete Rios in Lisbon to Peniche takes around 90 minutes, and there are normally several journeys per day. There are also some services from the Lisbon Oriente bus station, but not as many as from Sete Rios. Tickets can be purchased on Rede Expressos.

If you’re arriving into Lisbon Airport, take the metro from the airport to Sete Rios metro station.

From other parts of Portugal

Getting to other parts of Portugal from Peniche can be a little more complicated as many of the services go back to Lisbon to get a connecting bus which isn’t ideal if you aren’t heading south. There’s normally at least 1 direct bus per day to cities like Porto and Coimbra, but otherwise you’re either going to have to go back to Lisbon or take a local bus to somewhere that’s better connected. Long distance bus tickets can be booked on Rede Expressos.

Local buses are severed by Rodoviária do Tejo, which has a good website where you can easily find timetables and information. From Peniche, you can get to nearby towns like Caldas da Rainha, Nazaré, and Óbidos.

There is no train station in Peniche itself. The nearest train stations are in Caldas da Rainha or Torres Vedras. You can easily get a bus from Peniche to Caldas da Rainha, a pleasant town about an hour away, and the train runs from there to Coimbra in the North and Sintra in the south where it connects with the main north-south trainline.

Caldas da Rainha isn’t on the main train line, and has only a few services per day. To get onto the main line, take a bus to somewhere like Santarém which is on that line. From there, you’ll be able to access a lot more trains services going both north and south.