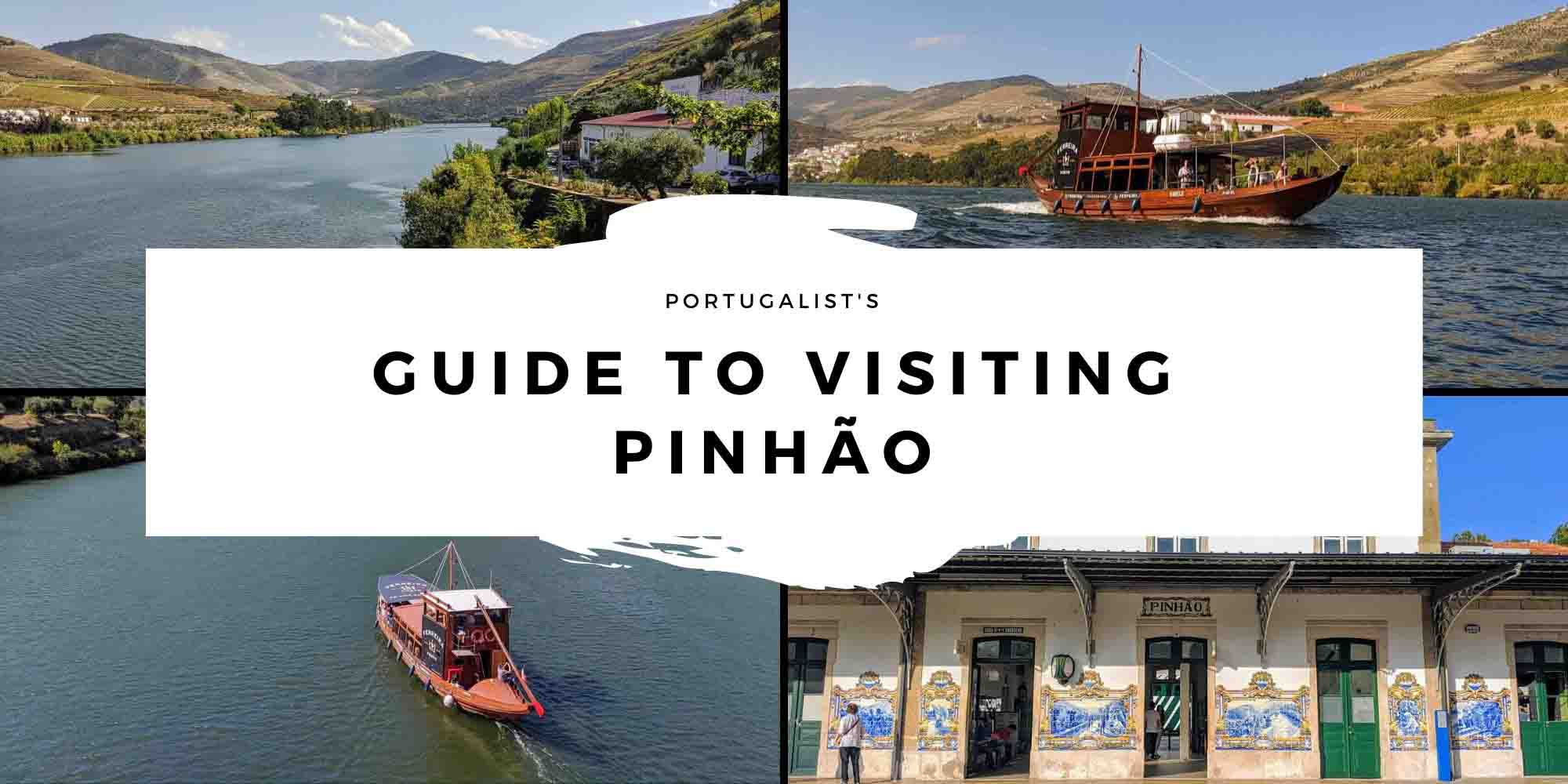 I was in the North of Portugal just as Autumn was coming in and I thought: where better to see the leaves change colour than the Douro Valley?

Although I had driven near Pinhão plenty of times, I hadn’t ever stopped off there. Knowing it was one of the most popular towns in The Douro, I decided to make it my base for a few days.

The Douro Valley is one of those places that you’ll find on lists of places to see before you die, and it’s easy to see why. It’s simply stunning – one of the most beautiful places not just in Portugal but in the entire world. Pinhão is at the heart of this beautiful region, and one of the most popular places for people to visit.

The region is obviously mecca for wine lovers. The Douro is the oldest wine region in the world, having been demarcated in 1756, and it produces some of the best wines in Portugal – many of which are hard to get outside of Portugal.

Pinhão is one of the most popular towns to visit, and I decided it was the best choice for me. If you want to do the same, you can either visit it as part of a day trip or you can do what I did and spend an overnight there.

It’s possible to visit Pinhão either as a day trip or as an overnight – it’s entirely up to you.

Note: These train times are accurate at the time of writing, but double check the timetable on cp.pt to make sure.

Of course, you can also visit Pinhão as part of a day trip by driving there, by taking a boat up the Douro from Porto, or by joining a bus tour. All of these options are covered later in this article.

The alternative to taking a day trip is to stay at one of the many beautiful hotels in Pinhão or nearby, and wake up the following morning looking out at the Douro River and the beautiful surrounding terraced vineyards. I know which one I’d choose!

The following are a few places that you can stay in Pinhão.

Note: I stayed in the Douro Hotel. It was affordable (by Douro standards) and fine for my needs, but I would probably choose the Vintage House or LBV House Hotel if I was looking for something a little more special.

There are several different ways that you can visit Pinhão, depending on your budget and needs.

One of the easiest and most affordable ways to get into The Douro is to take the train from Porto Campanhã to Pinhão. This train ride is incredibly beautiful – once it gets past Penafiel and especially once it actually starts to run alongside The Douro river at around Pala. A 1-way ticket from Porto to Pinhão costs €11 as of 2019.

The train itself is a basic Portuguese train, absolutely nothing fancy about it, and this is one of the things that I love about this train journey (although I wish they would wash the windows so people could see out better).

There is a historical train that you can take during the summer months, but this doesn’t start at Porto: it starts at Régua near Pinhão, and only goes for a few stops so it’s more of a thing to do when you get the Douro rather than a way of getting there.

Tip: Try and sit on the right-hand side of the train when going from Porto to Pinhão for the best views. There’s no assigned seating, so it’s just a case of getting on the train quickly at Campanhã.

Prefer to travel by bus? You can’t get to Pinhão by bus, but you can get to other towns in The Douro like Régua by bus. Tickets available from Rede Expressos.

The most beautiful and most memorable way to explore the Douro is to visit it by boat from Porto.

These day trips normally take you to and from Porto by boat one way, and the other way by train or bus. Lunch is normally included.

Another way to visit Pinhão and The Douro is to take a guided tour in a minibus. This option often has a bit more variety and includes a few vineyard stops as well as lunch. Sometimes a short boat trip is included as well.

Visiting The Douro by car is ideal if you want to stop off at different towns and villages along the way, something you can’t do with the train or by boat.

It’s obviously not a good way to visit the vineyards in The Douro unless someone in your group is happy to be the designated driver.

Tip: you don’t need to go all the way to Porto Airport to rent a car: there are car rental shops in Central Porto as well, although the majority are definitely at the airport. You can easily get to Porto Airport by metro, airport bus, or taxi.

Pinhão by Transfer (Hiring a car with a driver)

If you’d like to visit Porto by car, but would prefer someone else drive you you can easily book a transfer to take you there.

If you just want to get from A to B, a company like Welcome Pickups will do the job. If you want to stop off at a few places like Guimarães or Amarante along the way, mydaytrip.com would be a better option.

Things to do in Pinhão

While the town of Pinhão itself isn’t particularly interesting, there are quite a few things to see and do in Pinhão.

There are several vineyards near Pinhão. Some are accessible by foot from the town centre, and some you’ll need some form of transportation to get to.

Visiting the vineyards outside of Pinhão

Besides getting a taxi, there are a few other ways that you can go vineyard hopping from Pinhão.

Alternatively, you may want to skip the vineyard tours, and go straight to the wine tasting, there are plenty of places around Pinhão that offer tastings.

Take a Boat trip up the Douro

From Pinhão, you can easily take a boat trip up the Douro. The trips normally last either 1 or 2 hours and cost around €10 or €20 respectively.

This is a great way to see some of the beautiful vineyards that line the Douro River, and it’s a cheaper option than taking a boat trip all the way from Porto. Those trips normally cost around €100 per person, whereas you should expect to pay a little over €20 for your ticket and from Pinhão and another €10/20 for your 1-2 hour boat trip.

I think the 2-hour is the better option as the first hour flew by for me, and I would have been disappointed if I’d only booked the hour.

You can book boat rides in advance through sites like GetYourGuide, or book one when you arrive: Simply head down to the riverfront and find a quiosk there.

Pinhão Train Station is definitely not the only beautiful train station in Portugal – many rural train stations feature beautiful azulejos – but that doesn’t make it any less special.

This train station renowned for being particularly beautiful and, as the station is conveniently located right in the middle of the town centre, it’s a “must do” thing that’s also very easy to do.

The historical steam train usually runs once daily between June and October, staring in Régua, stopping briefly at Pinhão before continuing to Tua before coming back to Régua again.

The train normally departs from Régua at 15:23 and returns at around 18:32, so the entire trip lasts around 3 hours. During those three hours there is on-board entertainment with music from regional singers as well as a glass of Port and some other typical Portuguese goodies.

As for 2019, an adult ticket costs €42,50. Tickets can be purchased from train stations or online at cp.pt (see the bottom of the page).

One point to make about this coal-burning train is that it’s definitely not environmentally-friendly, and not suitable for those who are concerned about their carbon footprint.

There aren’t any lockers at Pinhão train station, so you really have two options if you’re travelling with suitcases or big bags.

Because I was taking the train from Braga to Pinhão, and this meant I didn’t go to Porto Campanhã, I went with the second option: I decided to spend a night in Pinhão.

I stayed at the budget-friendly Douro Hotel, which was €50 per night, and they allowed me to not only drop my bag off early but to check in early. They did say that if the room wasn’t ready, leaving the bag at reception wouldn’t be a problem.

When is the best time to visit Pinhão?

I went in Autumn and I really enjoyed seeing the “fall colours” over the Douro. That was in October, and it was just starting to get cold and wet.

The most interesting time to visit would be in September during the harvest.