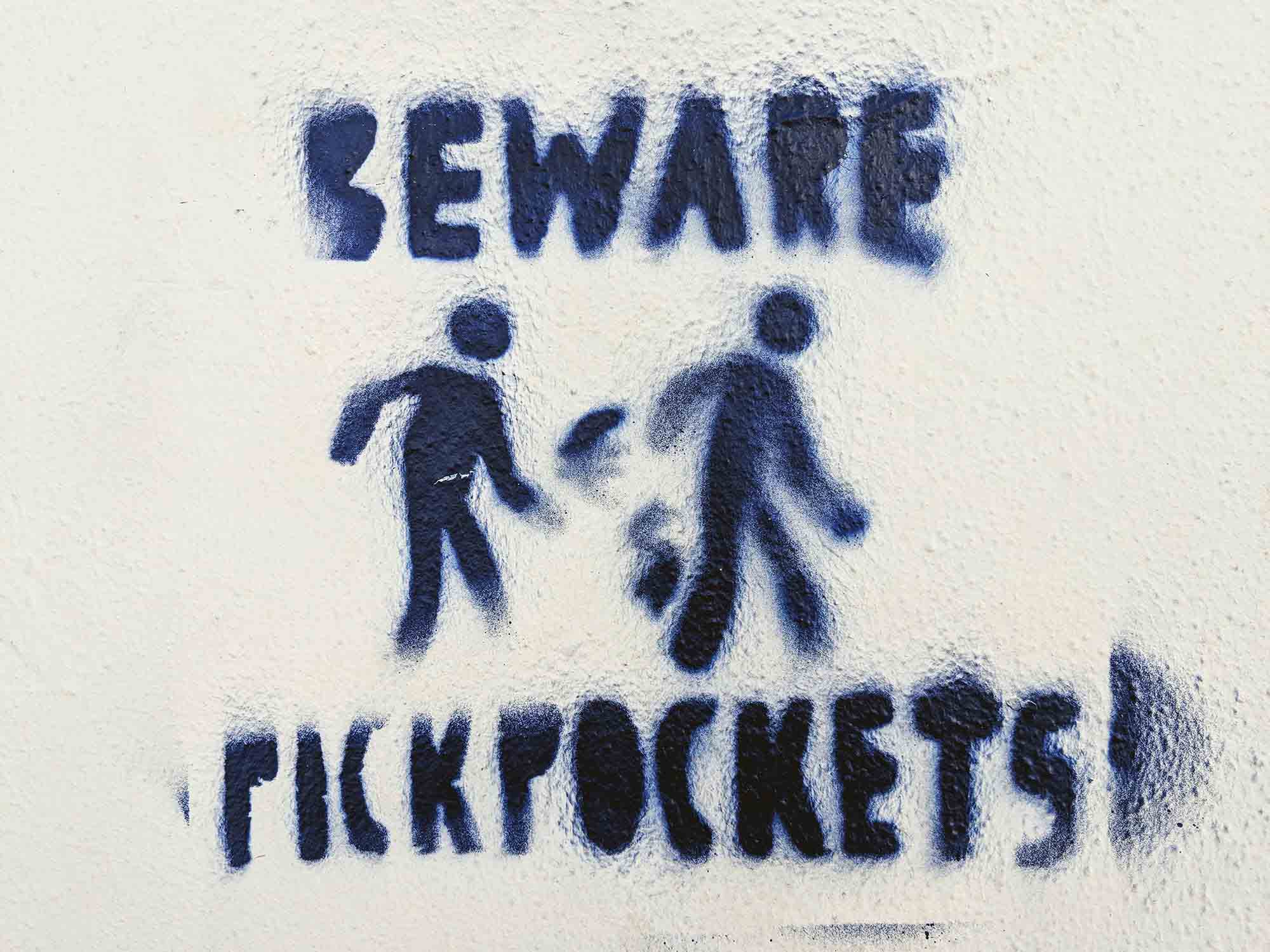 Travel scams are common in many parts of the world like Asia and Africa, but not so much in Europe. In Portugal, there are very few scams. Petty theft is a bit of a problem, and pickpockets and bag-snatchers do exist in Lisbon, but it’s nowhere near as bad as it is in other cities like Barcelona or Rome.

That said, there are a handful of scams (and things that seem like scams) that you should watch out for.

Euronet ATMs (sort of a scam)

Euronet ATMs charge you a huge transaction fee for using them – typically it’s somewhere between 7.5% and 20% on whatever you withdraw. Withdrawing €20, for example, will cost you €3.95.

Now ATMs charging fees isn’t necessarily a scam; there are plenty of ATMs that do this. The reason I’ve included Euronet ATMs on this list is because they don’t tell you that you’re going to get charged a fee for using the ATM. It isn’t until you look at your bank statement later on that you see what’s happened.

These ATMS are springing up all over Portugal. I’ve seen them in Lisbon, Porto, the Algarve, and the Azores. They’re also very common in airports like Porto Airport and Ponta Delgada Airport. In fact, in Ponta Delgada Airport it was difficult to find an ATM that wasn’t a Euronet ATM.

According to Observador, this restaurant is owned and operated by a former pickpocket who used to work the famous Tram 28. The scam works like this: tourists are given a menu, which does not include prices for the drinks or for that day’s specials. Most people assume a beer or a glass of wine will cost less than €5, and that the specials will cost roughly the same as the other items on the menu.

They do not. There have been reports of people paying over €50 for a beer and over €250 for a seafood platter. And, the food apparently isn’t even that good. When people complain, a menu magically appears with the €50-per-beer prices.

So far the Portuguese authorities haven’t been able to shut the place down despite complaints and the scam making national and even international headlines. Although this is currently only limited to one restaurant, there’s nothing to stop other restaurants (in Lisbon or anywhere in the world) copying this scam. Always check the prices of anything before ordering.

In Lisbon, Porto, and even the Algarve, men will sometimes walk past and say “hashish, marijuana, cocaine.” In Lisbon, you’ll see these guys in Baixa, the Bairro Alto, Rossio – basically anywhere there are tourists.

I’ve read some people say these guys are in cahoots with the police, who are hiding around the corner waiting to put you in jail (or take a bribe). I don’t know if that’s true or not. Drugs – everything from cannabis to heroin – have been decriminalised in Portugal, and that sort of scam which is common in other parts of the world wouldn’t work as well here.

But even though you mightn’t get arrested, you can probably expect to be sold some licorice or washing up power in place of hash or cocaine.

Parking Scam (not a scam)

When you enter a car park, you’ll sometimes see men directing you into a parking space. In return for finding you a space, and keeping watch over your car, many people give them a tip of a Euro or two.

This isn’t really a scam, although many people see it as one. It’s something that’s common in Portugal and Spain, and also in South Africa. There’s no obligation to pay, although most people do. If you say you’re not going to, usually nothing happens although I think a lot of people would rather pay it then run the risk of having their car keyed.

In South Africa, these unofficial parking attendants can be very useful. Car crime is a big problem there, and most people are happy to pay an unofficial security guard to watch their car. In Portugal, it’s not really such a big issue. Some people feel that having someone find you a parking space is worth the Euro or two, others just see it as a charitable donation.

Couvert (not a scam)

When you sit down at a restaurant in Portugal, the waiter will put some things on your table: usually bread, sardine paste, shrimp paste, butter, olives, and maybe Algarve carrots as well.

This is known as the couvert, and it is not a scam. You’re legally supposed to be asked if you want the couvert but, in practice, this doesn’t always happen.

Don’t worry, though: you can send back anything you don’t want, including the whole thing. If you open up the menu, the prices for everything should be included and you can decide whether you want it or not. Most people take the couvert as it’s nice to have something to pick at while you wait for your meal.

Now, I have seen some places come over with plates of meats and cheese that turn out to cost around €5 each. Some tourists say yes to everything, and then end up with a bill for €20+ euros just for the couvert.

I’ve only seen this done once or twice, but to be on the safe side always check the prices inside the menu.

The accidental extra item on the bill (scam)

Sometimes when you get your bill at a restaurant in Portugal, there’ll be an extra item on there that you didn’t order. The cost of this item varies, but it’s usually small — say €2-5. Not the end of the world, and certainly not the most ambitious scam ever conceived, but nobody likes to be ripped off. This is especially likely to happen if you have a large bill with many different items, and if you are in a touristy location.

Speak to the waiter about it, and they’ll immediately take it off. They never question it. You just get told it was an honest mistake, and they then come back with a corrected bill.

Thanks Charles, from the comments, for reminding me of this one.

Holiday rental scams used to be a much bigger thing. People would show up at their villa in Portugal, only to find out it didn’t exist. It’s still something to look out for, but it does seem like it’s less of a problem.

These days, most people book their accommodation through travel booking websites like Booking.com, hotels.com, and TripAdvisor, where they can pay attention to the number of reviews as villa or self-catering apartment has. Reviews can be fake obviously, but there are usually a few telltale signs: the reviews are all gushing with praise, the price is too good to be true, the owner wants payment via an unusual method, or the apartment or villa is newly listed.

Holiday rental scams do still happen, and you need to be careful when booking, but thankfully they do seem to be less of a problem than they once were.

The petitions scam is something that I’ve seen in almost European capital city. I’ve seen it in Lisbon, and I’ve heard of it happening in the Algarve as well.

Usually what happens is some (apparently) deaf and often mute people will come over and ask you to sign their petition. Most people readily say yes: petitions are almost never about anything bad. You sign your name, put in your e-mail, and then there’s another column for your donation. Some forms will even suggest a minimum donation amount.

Obviously petitions don’t usually require a donation, but the scam is supposed to put people on the spot and make them feel like they have to give a donation. The people asking for it are deaf and dumb, after all.

Are they deaf and dumb? According to a French newspaper, they are until the police come along.

Have you spotted any scams in Portugal? Let us and other travellers know in the comments below.

17 thoughts on “Travel scams to watch out for in Portugal”