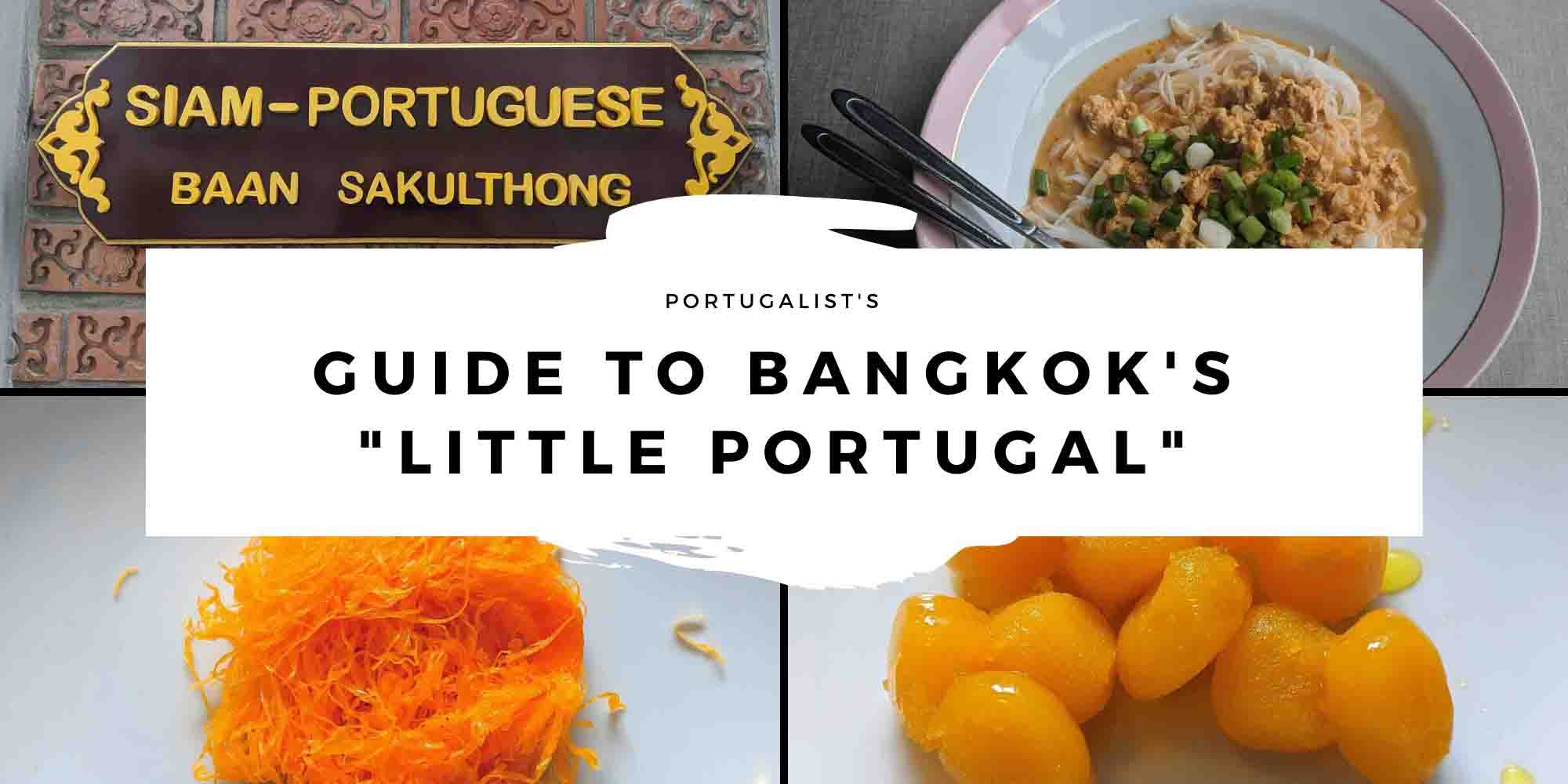 I first visited Bangkok back in 2016 and probably walked very close to the Portuguese neighbourhood of Kudeejeen without even realising it. It wasn’t until after I left Bangkok that I realised there was this little slice of Portugal hidden in the Thai capital.

In 2019, I had the chance to go back to Bangkok and made it my mission to check out this hidden neighbourhood.

I love seeking out little pieces of Portugal around the world and knowing that the Portuguese had some shared history with Thailand, I was keen to see if they’d left a mark on Bangkok.

And they had, although it’s fair to say that the mark has faded.

There was a time when Kudeejeen was an incredibly Portuguese neighbourhood, but that was many centuries ago. While there has been an effort to rediscover the Portuguese history of the neighbourhood, a lot of time has passed. During that time, many of the customs and traditions that the Portuguese brought with them have been lost as settlers married and integrated into Thai culture.

That said, there are a few Portuguese things that you can see (and especially eat) in Bangkok.

The Portuguese first arrived in Thailand (then Siam) in 1511 – more than 500 years ago – and began an international relationship with Thailand, the first Western country to do so.

The treaty between the two countries allowed Portugal to settle in the Kingdom of Siam and to trade freely. In return, the Portuguese supplied guns and ammunition to Siam.

Back then the capital of Siam was Ayutthaya, situated about 80 km north of Bangkok. The Portuguese had the largest Western presence in the city, and continued to develop even stronger relations with the Court of Ayutthaya. Remains of three Catholic churches exist to this day.

In the mid 1700s, an attack by the Burmese left the city of Ayutthaya in ruins. King Taksin decided that the solution was to move the capital south to the town of Thonburi and, in 1767, declared Thonburi (where Bangkok is today) the new capital.

The Portuguese settlers who had been living in Thonburi moved to the new capital. Interestingly, the Portuguese were the only European community still living in Ayutthaya at that point. All of the others had been kicked out in 1688, but the Portuguese had developed such good relations that they were allowed to stay.

They were granted an area of land beside the river. Then, when the king visited the area in 1769, he gave them permission to build a Catholic church – the Santa Cruz church, which still exists to this day.

What to see & do Kudeejeen

The Santa Cruz church, which sticks out above the rooftops along with the many neighbouring temples, is really the only clue that you’re in the Portuguese neighbourhood of Kudeejeen.

It’s not like Little Portugal in London, which is made up of Portuguese restaurants, shops, and pastelarias. Here in Kudeejeen, there are no Portuguese flags on the houses, and you don’t hear Portuguese spoken amongst the residents.

But the area is still Portuguese, or at least Catholic anyway. The land is owned by the church and the 200 or so descendants that live in the area pay rent to the church.

TakeMeTour.com offer a guided tour of the Kudeejeen neighbourhood that covers most of the places I mention in this article and the tour includes an opportunity to sample some Thai-Portuguese cuisine. If you’d like to get a more in-depth experience of the neighbourhood, have a look at what Take Me Tour has to offer.

Halo Nomsod, a riverside café, has a sign advertising the house speciality: Portuguese rice noodles with chicken curry. Naturally, I have to go in and try it. As I sit down, the owner warns me that it’s “not spicy.” Clearly, he’s been raised on a different type of Portuguese food to me.

The noodles are definitely tasty, a delicious mix of Thai flavours like lemongrass and coconut milk. As I had expected, nothing about it tasted Portuguese. In fact, it was also a little spicy – by Portuguese standards anyway. Still, it was tasty and I would eat it again.

My next stop is Thanusingha Bakery House, a bakery down a nearby alleyway, to sample khanom farang kudi chin. Sometimes translated as foreigner cake, this bakery has been making this traditional Portuguese cake for more than 5 generations.

The cake was developed when the Portuguese settled in Ayutthaya and tried to recreate something from back home using ingredients that were available to them locally. Made with duck eggs, wheat flour, and brown sugar, this cake tastes much more Portuguese than the chicken curry noodles although if nobody had told me it was Portuguese I probably wouldn’t have made the connection.

I guess it tastes a little like queque, a common cake in Portuguese cafés, but it was definitely very different. It was much lighter, drier, and had a taste that I couldn’t put my finger on but is common in Asian bakeries. I don’t think I’ll go back for another one but, given the history of this cake, it was interesting to try it.

The Baan Kudichin Museum is the main Portuguese attraction in the neighbourhood.The niche museum is well put together, with lots of information about Portugal’s history within Thailand as well as some artefacts taken from the houses in the Kudeejeen neighbourhood.

As well as raw ingredients, they also introduced a number of dishes into Thai-Portuguese cuisine, some of which I was able to find in Thailand. Some of the dishes that made it into Thai cuisine include fios de ovos, massapa’es, broinhas, bolo de coco, ovos moles, tigelada, and queijadas de Coimbra as well as a number of savoury dishes.

So, yes, the museum was interesting and worth a visit. If you want to visit, try to visit on the weekend as the onsite café serves traditional Thai-Portuguese snacks like Sappayak bun, a dish made with minced pork, chilies, potatoes, and tamarind and served in a soft bun. There’s also a pork and potato stew although that actually did look fairly Portuguese.

Just opposite the Baan Kudichin Museum is Baan Sakul Thong, a restaurant and small cookery school. Here, you can learn to make a range of Portuguese-Thai foods including a Thai take on Cozido à Portuguesa.

The restaurant and cookery school is really open on weekends and booking is recommended, so this is something you have to plan in advance.

On the opposite side of the Chao Phraya River, near one of the entrances to the Pak Khlong Flower Market, I spotted a small stall selling Thai sweets.

Even if I hadn’t been on the lookout for Foi Thong (ฝอยทอง) I would immediately recognise the similarity between this and fios de ovos, a common sweet in Portugal and something you sometimes see on top of cakes.

This is one of the Portuguese sweets that has travelled the most. As well as Thailand’s Foi Thong, you’ll also find similar recipes in Spain (Huevo Hilado), Japan (Keiran Somen), Cambodia (Vawee), Malaysia (Jala mas), and the Northern Malabar region of India (Muttamala).

I also spot Thong Yot although, if I hadn’t been looking for it, I probably wouldn’t have guessed that this sweet was based on the filling used in ovos moles. Made from egg yolks, flour, and sugar, the recipe was adapted by Maria Guyomar de Pinha who worked as a cook for the Royal Palace during the reign of King Narai of Ayutthaya ( ‎26 October 1656 – 11 July 1688).

Both Foi Thong and Thong Yot are part of Thailand’s nine auspicious traditional Thai desserts, traditional sweets that are used for special occasions like wedding ceremonies.

I tried both and I actually quite liked the Thong Yot although it was even sweeter than ovos moles and that’s saying something. It was actually so sweet that I could barely finish one.

You don’t have to look far to find “custard tarts” in Asia – you can find them in many bakeries and even at KFC. The Hong Kong style, which is more common here, has a different flavour from the pastéis de nata you find in Portugal, and I have to say that I’m much more a fan of the Portuguese recipe. Still, it’s interesting to try both.

Tip: if you do see places actually advertising pastéis de nata rather than custard tarts, there’s a good chance it’s going to be more similar to the Portuguese recipe.