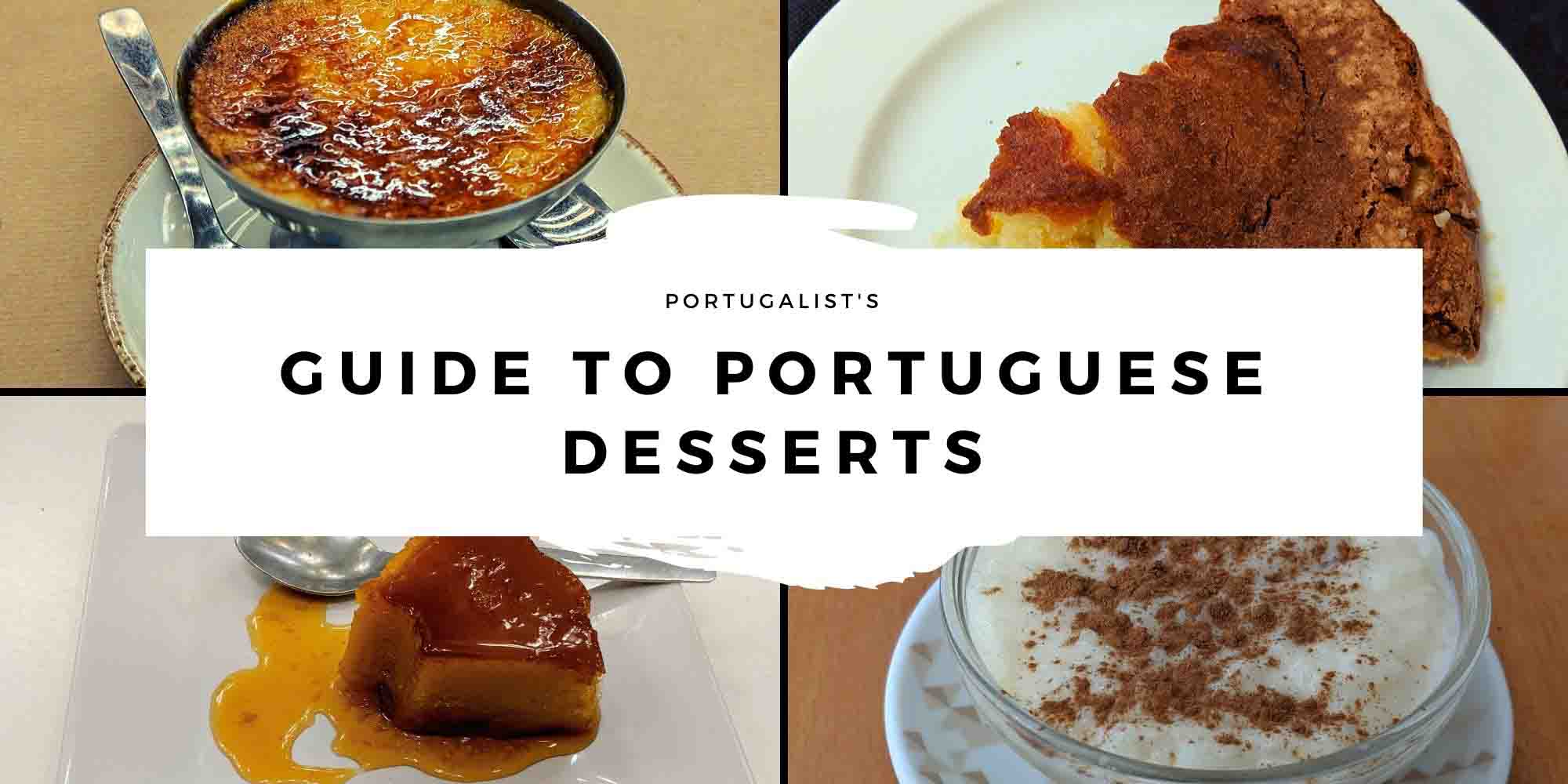 “Would you like to see the dessert menu?” is a question that doesn’t need to be asked in Portugal. Why? Because it’s just assumed you will be having dessert: a meal, and especially a meal out, just wouldn’t be a proper meal if it didn’t have dessert as well.

The dessert menu usually has around 5-10 items on it, and the menus don’t tend to differ hugely from one restaurant to another. Desserts like pudim flan and molotov almost always make an appearance and, if you can’t find the dish you’re looking for in the restaurant you’re currently in, you’ll probably find it in the next restaurant.

Desserts in Portugal are almost all fairly simple egg-based affairs that are often incredibly sweet as well. Vegans will probably struggle to find something that’s suitable for them, and may need to stick to something like maçã assada or even just fresh fruit. Even dishes like arroz doce (rice pudding), a dish with many egg-free international variations, often use an egg in the Portuguese version.

Hey: if you enjoy this article, be sure to check out the mega list of all the different dishes you should try in Portugal (starters, mains, etc).

Many countries have their own take on this dessert: France has the Crème brûlée, Spain has Crema Catalana, and there’s even an English dish called Burnt Cream that some scholars believe may be what inspired the French Crème brûlée.

Leite creme is essentially a Crème brûlée, although there are a few differences that separate it. The main difference is that leite creme uses milk rather than cream. This means it’s slightly lighter and, you could argue, healthier.

Another difference, this time in the cooking process, is that leite creme is traditionally cooked with a small iron rather than a culinary torch. This is a round and flat piece of metal with a long handle that’s heated and then pressed down on the top of the leite creme.

Tarte de Alfarroba (carob tart) is a dessert that you mainly see on dessert menus in the Algarve, and it makes use of the carobs that are grown there. Often it contains almonds as well, which also grow in the Algarve.

Carob is a lot like chocolate and, although this isn’t identical to a chocolate cake, it’s quite a rich dessert that definitely reminds you of that.

Arroz doce is a popular rice pudding dessert that’s found on menus throughout Portugal. Rice pudding is a dessert that many countries have, although a lot of countries have their own individual take on it. In some Asian countries, for example Thailand and Sri Lanka, coconut milk is used while recipes from Iran and other countries in the Middle East often call for ingredients like saffron and pistachios.

Molotov (Pudim Molotov) is a very traditional Portuguese dessert, and a dish that you’ll find on a lot of menus. Like many Portuguese sweets, it’s likely that originated as a way to use up excess egg whites.

Most people when they see the name think of Molotov cocktails and, although the name might have soviet connections, it doesn’t really have anything to do with that. Most people believe the dish was originally called Malakoff, which was the name of a major battle that was fought during the Crimean War, and later was renamed during WWII after Russian politician Vyacheslav Mikhailovich Molotov.

Regardless of the dessert’s origins, this is a very popular Portuguese dish and one you’re likely to stumble across at least once while you’re in Portugal.

These are three ingredients that are widely available in the Algarve, and are used in a lot of different desserts in South Portugal. It’s one of the nicest desserts: not just in the Algarve, but in the whole of Portugal.

Pão de Ló is a soft Portuguese sponge cake made from eggs, sugar, and flour. You’ll find this both on dessert menus and also in the cakes section of your local pastelaria, which is unusual: normally a cake or dessert is in one place or the other.

Although it’s called a sponge cake, the sponge has a very different feel to sponge cake from other countries: it’s much, much softer, moister, and not really very crumbly.

There are all kinds of variations on this cake. The cake in the picture contains chocolate, but normally Pão de Ló doesn’t and its famous for just using the three ingredients.

The name of this dish is quite confusing, as it looks like it means “sweet of the house” meaning the restaurant’s house dessert. In reality, this is a dessert that’s found in restaurants throughout Portugal and the recipe is more or less always the same.

Doce da Casa is essentially cream and custard on a bed of maria biscuits that have been soaked in coffee, and it tastes a bit like a British trifle but without the sponge. If you like trifle, this is definitely one to try.

Bolo de bolacha is a Portuguese dish made from ground maria biscuits, butter, egg yolks, and coffee. This is a very rich and tasty dish, and one that’s popular with both adults and children in Portugal.

The cake is made up of layers: one layer of biscuits soaked in coffee, and one layer of the butter, sugar, and egg yolk cream.

The dish comes from Macau, a former Portuguese colony, but it’s quite possible that it originated in Portugal and was brought over. You’ll find it in many restaurants and cafés in Macau, but you’ll also occasionally stumble upon it in Portugal as well.

Serradura means sawdust pudding, referring to the ground-up Maria biscuits. As well as the biscuits it also uses whipped cream and condensed milk, as opposed to bolo de bolacha which uses butter cream.

Sericaia, or Portuguese egg pudding is a dish that hails from Portugal’s Alentejo region. Made from milk, eggs, and sugar, as well as cinnamon for the topping, this is another simple dish that makes good use of very few ingredients. It is often served with local Alentejo plums, especially plums in syrup.

Torta de amêndoa is quite a rich, dense cake made from ground almonds, sugar, eggs, and flour.

Because its so dense from the ground almonds, this cake is very filling and is maybe best shared between two people.

Maçã asada is baked apple, but there’s a little more to this than simply putting an apple in the oven. The apple core is usually removed and replaced with a cinnamon stick, and the apples are covered in butter, sugar, and often Port wine as well.

Although this is quite a simple dish, it’s actually very tasty and worth ordering. Because of the butter and sugar, it’s not as healthy as you assume it is. If you’re looking for a healthy dessert, you’re probably best sticking to fresh fruit.

Baba Camelo is a very simple Portuguese dessert that’s made from eggs and condensed milk (or pre-made dulce de leche either). It’s often topped with toasted almond slices, but this is optional.

The name Baba Camelo actually means camel’s drool, but don’t let that put you off. Despite its name and despite its simplicity, this is a very popular Portuguese dessert.

Tentação, which translates as temptation, is a Portuguese dessert that tastes quite similar to Tiramisu, although there are lots of different variations on this recipe that alter the flavour (e.g. the strawberry-flavoured doce tentação de morango).

Like many Portuguese desserts, and like Italian Tiramisu, the recipe is quite simple and combines a few basic ingredients like maria biscuits, cream, butter, condensed milk, and sugar.

Peras bêbedas translates as drunken pears, which is a fun way of saying that these are pears that have been poached in a lot of wine. This is quite a simple dish and it really only contains a few ingredients like red wine, a cinnamon stick, sugar, lemon, and of course pears.

Simple isn’t necessarily a bad thing, though: this is a delicious dessert and it’s much lighter than the other desserts as well.

This is something that people do actually order, particularly people that eat out regularly. It’s nice to have it as an option if you’re not feeling hungry enough to devour a whole dessert.

Farófias are meringues that are poached in custard, which keeps them soft, and the dish is then sprinkled with cinnamon. Although it has a lot of competition from all of the other Portuguese desserts, this is one of the most egg-heavy Portuguese desserts there is.

Mousse de Chocolate or chocolate mousse isn’t a dish that’s unique to Portugal, and you’ve probably already had some variation of this sweet before. The Portuguese recipes all tend to use very dark chocolate, so it’s quite rich and decadent.

Mousse de maracujá is a passionfruit mouse that’s made from passionfruit (often tinned), condensed milk, sugar, cream, and occasionally gelatin as well. It’s not really a mousse in the same way that the mousse de chocolate is: the passionfruit isn’t folded into egg whites, but it’s called a mousse nonetheless.

Tarte de Maçã is an apple tart and, like mousse de chocolate and arroz doce, there’s a chance you’ve had this dessert before: there’s no real difference between the recipe for Portuguese apple tart and those found in other countries.

Sonhos, which is the Portuguese for dreams, are Portuguese doughnuts. They’re usually eaten around Christmas time, along with filhos, but you’ll occasionally find them at other times of the year as well.

Toucinho do céu literally means bacon from heaven, but you’ll be pleased to know that no pork is used in the making of this dessert. Well, any more anyway. At one point pork lard was used instead of butter, but these days almost every recipe uses butter instead.

Like many other Portuguese cakes and desserts, this dish was created in the convents of Portugal and was created as a way of using up egg yolks. As well as egg yolks, toucinho do céu also contains sugar, ground almonds, and flour.

Torta de laranja is a simple Portuguese cake that’s made from just a handful of ingredients: eggs, sugar, oranges, and flour. It’s essentially an orange-flavoured swiss roll that’s usually much stickier and also much sweeter as well. As well as on dessert menus, you can also find torta de laranja in the counter of many pastelarias as well.

Rabanada or fatias douradas is a Portuguese take on French toast. It’s often served as a dessert, particularly on Christmas Eve. Having it as a dessert is unusual for a lot of people, as most people associate French Toast with breakfast.

Ice cream on a Portuguese menu is usually pretty simple, and the flavours are likely to be basics like strawberry, vanilla, and chocolate. It’s unlikely this will be homemade, and it’ll probably say if it is.

This is definitely one of Portugal’s most unusual desserts: it’s a dessert made with egg yolks and sugar and shaped like a lamprey fish. You’ll see it on menus around Christmas time, and you can also pick these up in the desserts section of many supermarkets as well.

Why? Who knows. This is just a bizarre Christmas dish but, it’s so unusual that if you see it on a menu, you’re going to have to try it.

Coffee always comes after dessert, and then the final stage is getting the bill (a conta, por favor). You can ask for dessert and coffee together, or even to get your bill with your coffee, but there’s no guarantee you’ll get them together. For whatever reason, this is a three-stage process but there’s nothing to stop you from trying!

How many of these Portuguese desserts have you tried? Do you have a favourite? Let us know your thoughts and reviews by leaving a comment below.