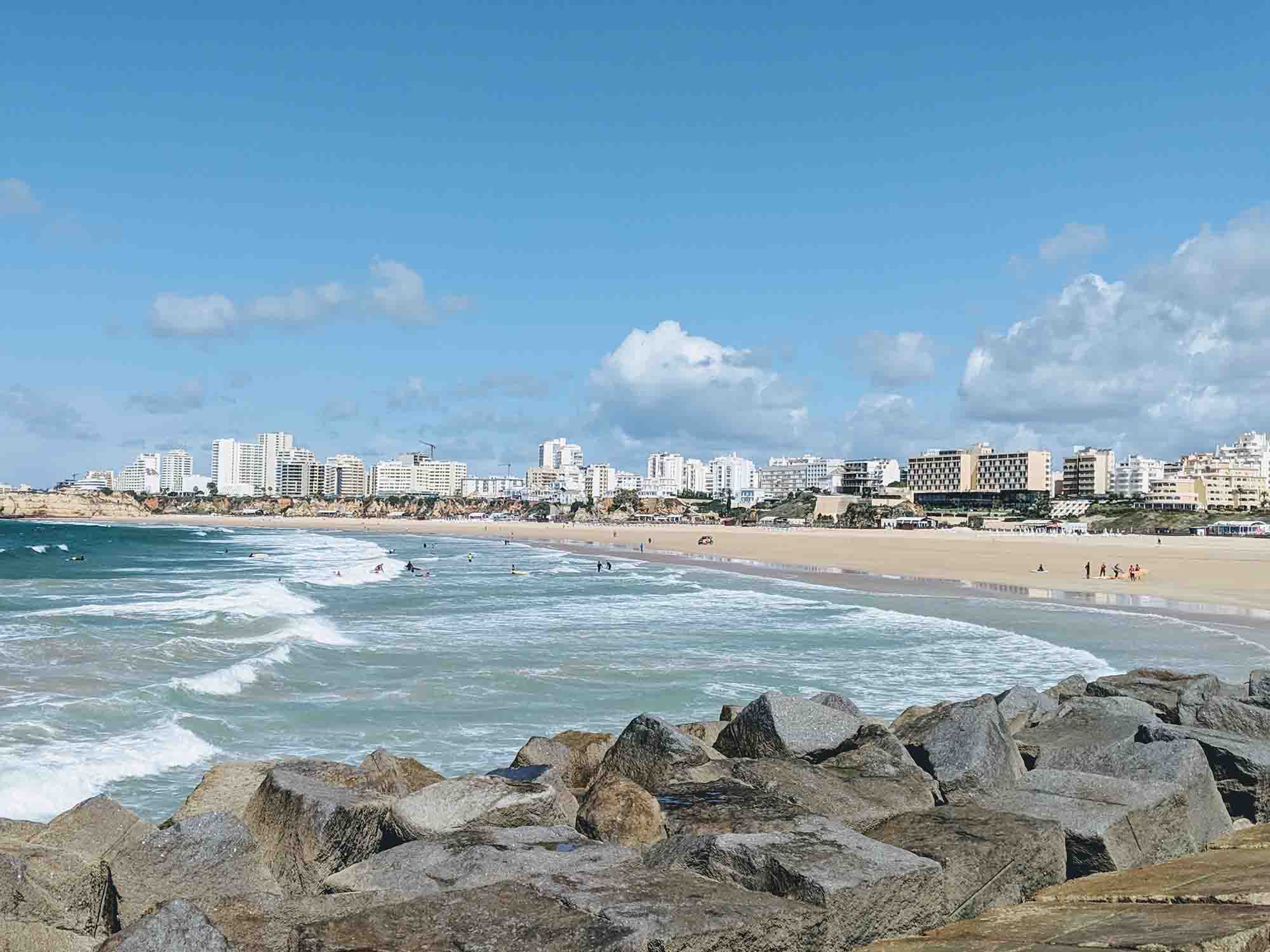 View of Praia da Rocha from the pier

Praia da Rocha is one of the largest and most popular beach resort towns on the Algarve. Named after the very long and very beautiful beach that this town is centred on, Praia da Rocha is a lively town with plenty of bars, restaurants, and cafés.

The town is known for its long, wide sandy beach, high-rise blocks of apartments, many of which are holiday rentals, and the family-friendly but lively atmosphere there in the summer. Praia da Rocha is quite similar to Albufeira in this respect and attracts tourists from all over the world, but particularly the UK and Ireland as well as some Portuguese.

Most of the town is centered along the boardwalk or “Strip,” which, along with its many bars and restaurants, has some fantastic views of Praia da Rocha beach, the nearby Praia da Rocha lighthouse, and across the river to Ferragudo.

Praia da Rocha is obviously a great place for a holiday, but what is it like to live there?

The first pro is obviously the beach or beaches as, besides Praia da Rocha beach, Praia dos Três Castelos, Praia do Amado, Praia dos Careanos, and Praia do Vau are all within walking distance of the town centre.

Praia da Rocha is also very affordable in comparison to other towns on the Algarve. Although the quality can vary, apartments are very cheap here when compared to the rest of the Algarve. And, of course, that apartment is going to be within walking distance of the beach.

Despite the fact that Praia da Rocha attracts a few party-loving tourists, it’s actually quite a good place for keeping fit. There are cycle paths throughout, both the promenade and the wooden boardwalk are great for running, and there’s a good outdoor gym with plenty of pull-up bars for calisthenics-based workouts. Surf lessons for beginners are available, and the West Coast is only a short drive away if you want bigger waves.

Praia da Rocha is really a holiday resort town. This means that it’s busy and noisy in the summer, but in the winter many of the restaurants and bars close up and the town is incredibly quiet. These towns can be fun for a holiday, but you may not want to live here year-round.

Portimão, on the other hand, is much less touristic due to the distance from the beach, more Portuguese, and more of a place where people live rather than just visit as tourists.

Although there are a few minimercados, there’s really only one supermarket in Praia da Rocha, a reasonably-priced Inermarché. Bigger supermarkets like Lidl and Continente can be found around 3 km away, but this makes it difficult if you don’t have a car.

While the beach is beautiful, both Praia da Rocha and nearby Portimão are made up of lots of high-rise blocks of apartments, which won’t appeal to everyone. Other nearby towns like Alvor and Ferragudo are much prettier.

Praia da Rocha is situated on the coast, around 2 km from Portimão. It sits on the border between the “Western Algarve” and the “Central Algarve.”

Portimão is the second-largest city on the Algarve after Faro and a major hub with a large hospital, bus station, and other essential amenities.

Although nearby Portimão has both a bus and a train station, Praia da Rocha itself doesn’t have great public transport: the train station is around 3.5 km away in Portimão, while the main bus station (for interregional coach trips) is a little over 4 km away – too far for most people to walk, but you can easily get a taxi or bus there. Train tickets can be purchased on cp.pt and long distance coach tickets on Rede Expressos. Discount coach tickets to bigger cities like Lisbon, Porto, and Madrid can be booked through Flixbus.pt.

There is a local inner city bus service, Vai e Vem, that covers Portimão and Praia da Rocha. There are also buses that run in the direction of Alvor and Lagos as well as Albufeira and Faro.

Alternatively, there are taxi ranks in Praia da Rocha and Uber and many of the other taxi apps operate here as well.

Praia da Rocha does have excellent cycle paths and, since a lot of Portimão is quite wide and flat, a bike could be a very good investment here.

Praia da Rocha is a resort town that’s sprung up around Praia da Rocha beach, and consists of all the trappings you would normally find in a seaside town like souvenir shops, bars, and a real holiday atmosphere.

Portimão, on the other hand, is a Portuguese city, and it’s where many of the Portuguese in the area live. It’s not overly beautiful, especially when compared to Faro, and, because of this and the fact that it doesn’t have an easily accessible beach, it’s not overly touristic.

That’s not to say it isn’t worth visiting. Portimão has a fantastic waterfront, plenty of great seafood restaurants, and some very attractive historical buildings. It’s a different vibe to Praia da Rocha, though, and, for many people, it makes more sense to stay in Praia da Rocha and take a few day trips up to Portimão.