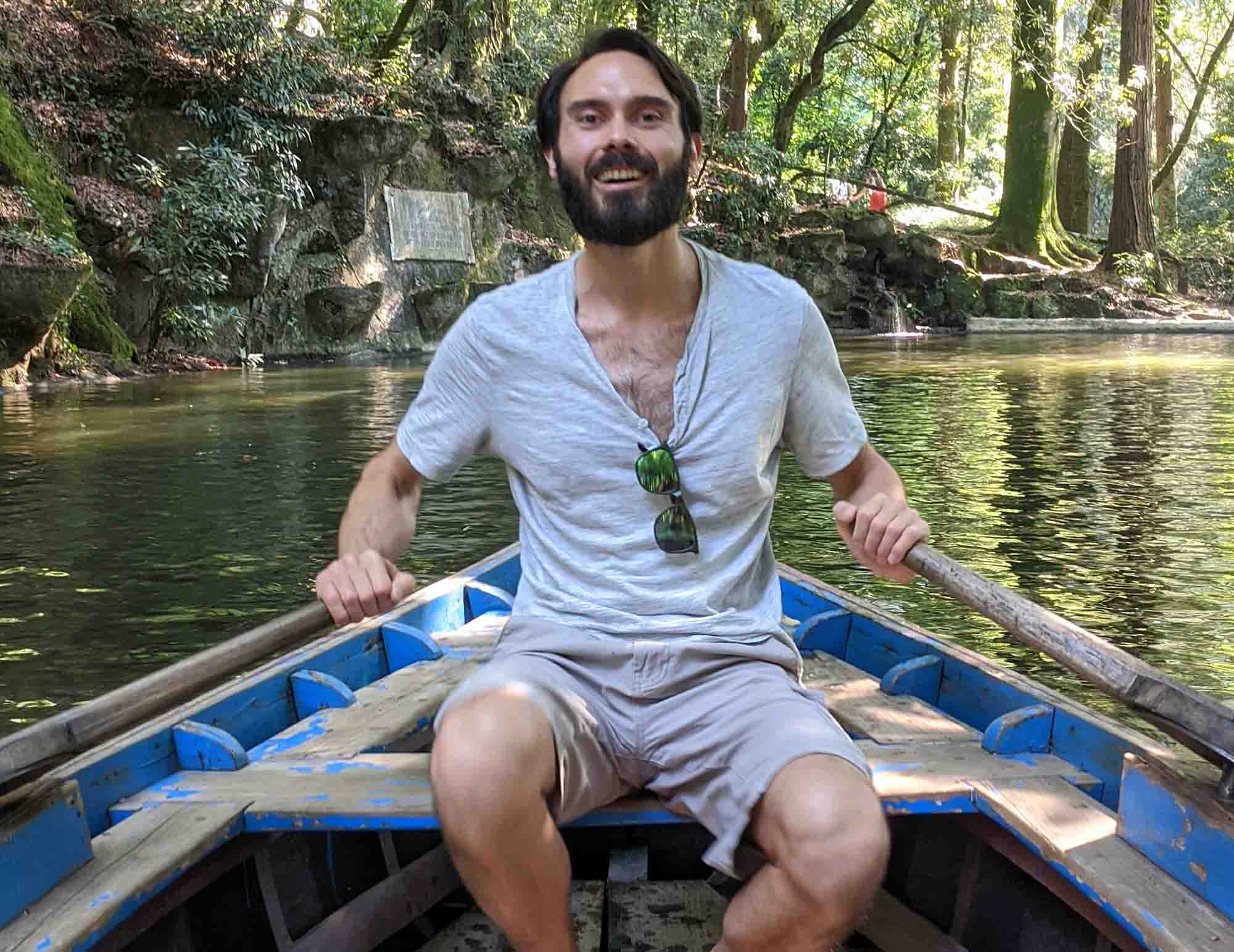 Sam Vargas had a very unique journey to becoming a web developer, and especially one living in Portugal. An opportunity at a coding bootcamp in Lisbon gave him the opportunity to switch careers, and eventually lead to him making a permanent move to Portugal.

Tell us a little bit about yourself

I’m originally from London born to a British mother and a Portuguese father. Despite having a Portuguese parent, we never spoke Portuguese at home and my father only ever speaks Portuguese with friends in Portugal on the phone or via Skype.

After university reading Study of Religions from a multidisciplinary approach I fell into working in the arts sector. After fixing some of the organisations computers, I found myself roles as an IT technician, a film projectionist as well a theatre technician.

After the last financial crash I realised an industry relying on government funding had its limits and explored other options. After a few weeks I started training as a British Merchant Navy officer, a job a remained in for nearly a decade. I specialised in working on government funded research vessels and for the last year for my career at sea I worked for British Antarctic Survey carrying scientists doing various studies along the ice edge and Southern Atlantic Ocean.

What made you decide to switch careers and become a developer?

While I loved working at sea, particularly in science, and enjoyed the challenges and travelling parts of the job, it was very challenging to maintain a work life balance I was looking for. Not least, it made holding down relationships tricky when I’d be away for three or four months at time and only be back for two or three months. It is a tough job that involves working around the clock and working strange hours takes it toll.

I’d always had an interest in tech, heavily influenced by my dad’s obsession with new and shiny and my uncle who worked in tech. It was my uncle who introduced me to Linux and programming but never seriously started programming until I started with Python about 18 months ago. After that, I become more aware of the opportunities in tech and web development and completed a few online courses and attended in person one day workshops.

What made you choose Lisbon?

I moved to Lisbon about three years ago. I always had fond memories of the winding streets of Lisbon and the sounds of Fado emanating from small doors when on holiday with my family as a young boy. As I said earlier, I never spoke Portuguese at home but wanted to learn the language and culture, along with its increasing reputation as a vibrant city to be, it seemed like the perfect fit.

After doing a couple of one day workshops with Ironhack who were, at that time, based only a few minutes from my apartment, I began to think making the career change could be really possible. After all, I already had a career to fall back on if it didn’t work out. I deliberated for a few months but eventually signed up after applying for, and getting, a part-funded scholarship.

The course itself was challenging, with new concepts daily and long hours, both teaching and practice projects. We had a lead teacher, who mainly delivered the lectures, and three teaching assistants on hand to help with any challenges that came up with the lead teach helping out with more difficult questions. But the experience of going through it with a group made it so much easier. Ironhack has a good policy of trying to balance the hard work with fun.

Every Friday was “Ironbeers” for instance. Overall, we all made good friends and genuinely came out with the ability to create great websites and web apps. In such a short course, computer science topics weren’t really addressed, so for anyone considering this I’d highly recommend doing some groundwork beforehand to make you a more rounded developer.

Ironhack has subsequently changed location to a beautiful building by Santa Apolonia and is growing all the time and investing time in community building and hosting tech talks.

How easy was it to find a job in Lisbon?

Surprisingly easy. I invested a lot of time making a professional LinkedIn profile and took advantage of the free month of LinkedIn learning doing as many short courses as possible to round my knowledge and demonstrate that to employers. I also spent time refining my own portfolio site and did a number of small contracts.

After that, I found a job through LinkedIn. In fact, I was contacted about an opportunity, which I was surprised about as a junior developer but it goes to show, with some effort it is possible. While

I do speak Portuguese to an intermediate level it is not at a professional level and speak with my colleagues in a mixture of Portuguese and English, depending on the setting. In general, Portuguese people in tech have great English as many have studied computer science in English so this is not generally an obstacle, although, efforts to learn Portuguese are appreciated.

The job itself itself is for Everdelta, a small Lisbon based company, with products focused around VOIP and telephony. The project I am currently working on provides a Video Assistance platform leveraging webrtc in the browser.

Have you found it easy to settle into life in Portugal?

When I first moved to Portugal it was easy. I was earning foreign money and I had little dealing with the state. The cost of living was much lower than the UK and the sun was shinning. In Lisbon there are regular events and it’s easy to meet people and get to know the city. Some of the biggest challenges in the longer term though have been that many events advertised on platforms like meetup attract a transient crowd and making Alfacinhas (literally ‘little lettuces’, the unofficial name for people from Lisbon) friends can be challenging.

Lisbon’s popularity is a blessing and a curse. For those truly wanting to integrate speaking the language I’ve found Lisbon and Porto, particularly difficult because of the Portuguese tendency to switch to (very good) English almost immediately. Out of these two big cities and much of the Algarve though, it’s practically the opposite!

What would you say are the main pros and cons about living in Lisbon?

While Lisbon is blessed with long hot summers, it also has long damp winters. Houses are not built with insulation or damp coursing, which is standard in many Northern European homes, so many suffer from damp and mould. As an allergy sufferer this has been difficult. This coupled with Lisbon’s popularity as a tourist destination has meant many homes had been converted into short term lets (this has now technically been halted by law in historic neighbourhoods) reducing the housing market further and driving up prices.

While on the surface rental prices may appear cheap, it can be hard to find quality housing. The skyrocketing rental prices in the last few years has also created some friction with the locals, particularly in poorer traditional neighbourhoods in the city centre.

I think you’ve already covered most of the rest already James 😉 I’d just add to that the postal service and courier services are slow and unreliable.

The biggest pros are without doubt living in a beach city. Carcavelos is on of my favourite close to city with plenty of bars and restaurants and there are a range of stunning beaches only half an hour’s drive away from the city centre. Meeting up with friends to chill at the beach or surf is what makes the city. Further out of the city, you’ll find morning yoga and exercises classes right on the city’s beaches. With it’s ever increasing appeal, more diverse events and businesses are popping up all the time.

What would you say are the main differences between life in the UK and Portugal?

The most obvious differences from when you arrive is table service in many places. While sitting outside on an esplanada and having someone bring you a cold beer is great, when I comes time to pay you may be waiting a while. This is definitely noticeable in restaurants. If you’re going for dinner, you’d better not be in a rush. The second obvious thing is the lack of tipping culture. But, the slower pace of life is many of us moved here for.

The differences when living and working here are bigger. Work hours are long and, from what I’ve heard from Portuguese friends and family, there can be a culture of competition for who stays in the office longest. Though definitely not the case in the tech sector, it is safe to say, in general, it’s not a results driven culture. In many sectors, particularly construction, corners are cut and prices hiked. There is often the perception that if you are foreign, you are rich and prices are adjusted accordingly. Be prepared to barter on big jobs and have a solid contract. Then there’s time estimates for jobs in almost all sectors are often overly optimistic.

For anyone resident here dealing with the state can be a lengthy process with a lot of queuing at offices. This may be changing though as, with the outbreak of covid-19, people are being assigned appointment times. Let’s hope it’s here to stay.

Another rapid change has been cashless payments. Most places now accept card payments and foreign cards which was unthinkable three years ago.

Most of the biggest differences coming from the UK is the presence of big online retailers. For domestic companies deliveries are not reliable and the options limited. Many people import goods from elsewhere in Europe. On the flip side, Lisbon is blessed with lots of well stocked traditional shops and excellent markets, for example, the Saturday market in Principe Real and Mercado da Ribeira.

What are your future plans?

While Portugal has many great things to offer with the pandemic, I’ve got a taste of remote working and plan on “slowmading” with my partner for while. Right now, we’re spending the summer in Braga then we’re off once restrictions lift. Who knows? Maybe we’ll be back.

For anyone else who wants to follow in Sam’s footsteps, Ironhack have kindly offered a “Portugalist Scholarship” or 10% off when you apply. Simply mention Portugalist under the “how did you hear about us” section when you apply here.

And, if you want to see some of his work, check out Sam’s portfolio here.