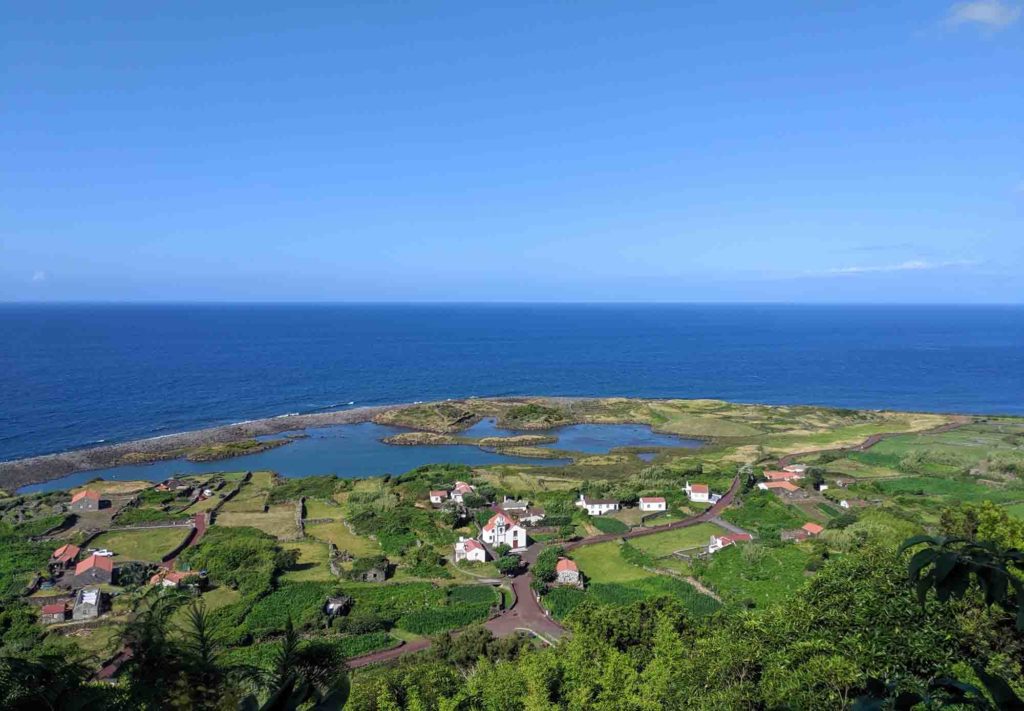 Known as the “dragon island” and the “island of fajãs,” São Jorge is one of the most intriguing islands on the Azores. It’s incredibly hilly and steep, and many of the people live on fajãs – land that forms at the bottom of a cliff after an avalanche.

Some people, those living in the town of Fajã da Caldeira de Santo Cristo, don’t have electricity or even roads into the town, and the island is also home to the only coffee plantation in Europe.

Despite all of these things, very little is written about São Jorge and very few people visit it each year. If that’s not enough to tempt you there, I don’t know what is.

I stayed in Velas, the main town on São Jorge, and it seems that a lot of other people do as well. Velas itself isn’t particularly exciting but, from a practical point of view, it probably has the most restaurants on the island, is close to the airport, and you can get the ferry from here.

With no roads, no mains electricity, and a recent history that includes earthquakes and avalanches, the Fajã da Caldeira de Santo Cristo is one of the most interesting places on The Azores.

As there are no real roads to here, you’ll have to walk. The experience is definitely worth it, though.

You’ve tried the cheese (probably), now it’s time to see how it’s made.

Cheese is one of the most famous exports from the Azores, and particularly from São Jorge, and a visit to one of the factories on the island is an interesting opportunity to learn about how it’s made.

São Jorge Cheese is eaten all over Portugal, not just in the Azores. It has a taste that’s similar to a British cheddar, which is very unique amongst Portuguese cheeses.

As well as giving this cheese a trip, whether as a petisco (tapa) or by buying some from the supermarket, you can also take a tour of one of the dairies where it’s made.

Especies aren’t the best cake that you can try on the Azores (that award goes to the Bolo dona Amelias on Terceira in my opinion) but when in Rome, it’s important to sample all the cakes.

The cake is shaped like a horshoe and the filling is made from a mixture of herbs and spices including nutmeg, cinnamon, lemon, and pepper. You’ll find them on cafés all over São Jorge, and sometimes even on other Azorean islands as well.

Amêijoas à Bulhão Pato (clams cooked with olive oil, coriander, garlic, and lemon juice) is an incredibly popular dish all over Portugal. On the island of São Jorge, though, the dish is even more coveted because these are the best clams that you can find anywhere in Portugal.

You won’t find clams everywhere on São Jorge. In fact, there’s only one place that you’ll find them: Fajã da Caldeira de Santo Cristo, a very small village on the northern side of the island.

The clams are expensive at €25 per 500 grams (as of July 2019), so best if there’s more than one of you to split the cost. Even if you don’t decide to try the clams, the walk and the experience of visiting Fajã da Caldeira de Santo Cristo are both worth it.

There are two ways to get to São Jorge: by plane or by ferry from one of the other Azorean islands.

There are a small number of daily flights to São Jorge, usually just from Terceira Lajes Airport on Terceira. It’s more expensive than taking the ferry, but sometimes it’s the only option. You can search for flights on azoresairlines.pt.

São Jorge Airport is situated roughly 5 km outside of Velas, the main town on the island. Although there are no car rental stands at the airport (there’s basically nothing at the airport), most of the car rental companies are located close by and will come and meet you there.

Renting a car is definitely recommended, as getting around without one is very difficult, and it’s usually simplest to pick up the car when you arrive at the airport.

São Jorge has two ferry ports: Velas and Calheta. Velas with a population of around 3,000, while small, is the largest town on the island and the main port. Calheta is even smaller.

Ferries usually go to both Pico and Terceira, although there are normally more ferries to Pico than there are to Terceira as it’s much closer. Tickets can be booked online at atlanticoline.pt or purchased from at the ferry terminal.

If you want to get around São Jorge, you really need to rent a car. That’s true of most of the islands in The Azores, but it’s especially true of São Jorge.

Most of the car rental companies are based in and around Velas. They’ll come to the airport, if you’re flying into São Jorge’s Airport, or meet you at the ferry terminal or in Velas Town Centre itself.

São Jorge is a little more remote than islands like Terceira or São Miguel and most of the car rental companies aren’t actually listed on comparison sites like Skyscanner or Kayak. Take a look at this guide to car rental on São Jorge for a full list of companies, and work your way through the list. (I rented with Azorean Way Rent a Car and was happy).

Note: São Jorge is an incredibly small island and most car rental companies only have a few cars. This means that you should book your car rental as soon as possible if you actually want to get a car.

If you can’t find a car, one other option is to rent a car on another island (particularly Pico) and take it over on the ferry. A lot of people rent one car while visiting the Triangle (Pico, Faial, and São Jorge) and just bring it between the islands on the ferry. It would also be possible to rent a car on Terceira and bring it over.

There is a bus service on São Jorge, which you can use to get to some locations on the island. It won’t take you everywhere you want to go, and it probably won’t go as frequently as you want it to, but it is useful if you don’t have a car or are on a budget.

View the São Jorge bus timetable (accurate as of July 2019).

If you don’t have a car on São Jorge, the easiest way to get around is by taxi. Taxi drivers on the Azores usually all have a commonly-agreed list of prices for taking clients to attractions, including the start of hikes. You should also take their business card so you have their phone number and can ring them to pick you up when you finish the end of the hike.

Tip: Sometimes it’s hard to get a taxi, especially at the end of a hike. Be sure to take the names and numbers of several drivers and not just one.

Hitchhiking isn’t that common on The Azores. Some people do it (I did it on São Jorge), particularly people visiting during the summer months, but don’t expect to get picked up straight away.

Pico is the closest island to São Jorge and, if you haven’t already visited there, it makes sense to. From Pico you can also get to the island of Faial by ferry in just 30 minutes.

On the other side of São Jorge is Terceira and Graciosa. Terceira is one of the biggest and most popular islands on the Azores. It’s a very pleasant island to visit, and it also has a lot of flight connections to other islands on the Azores, mainland Portugal, and some international destinations like the UK, USA, and Canada – useful if you’re ending your trip here.

Graciosa is a much smaller island. You can also get there by ferry from Terceira, but it doesn’t have the connections to mainland Portugal that Terceira has so, if you end your trip here, you’ll have to get a connecting flight at somewhere like Terceira or São Miguel.