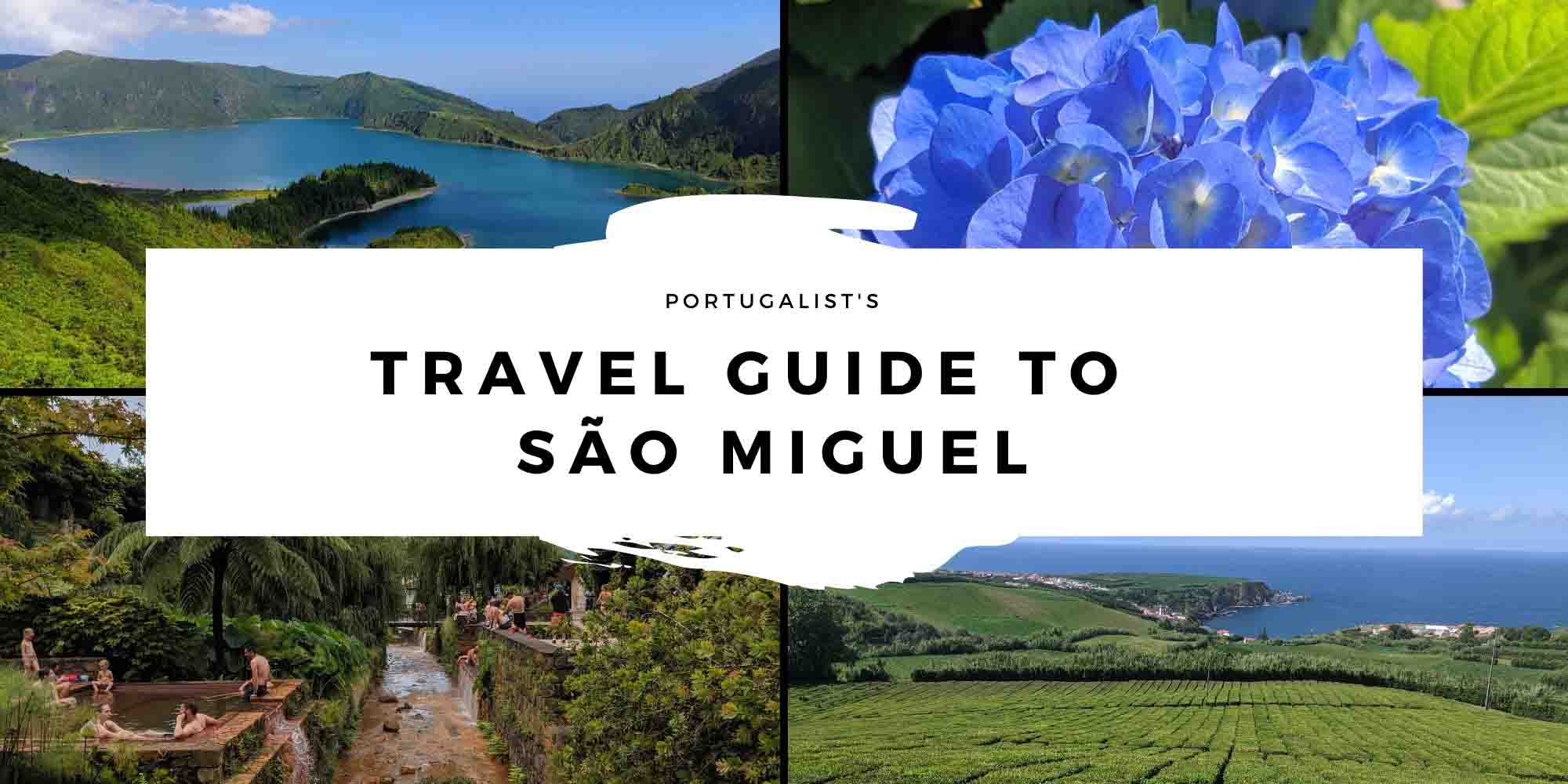 São Miguel is the largest and most popular island to visit in the Azores, and probably the island with the most things to see and do.

From beautiful lakes, to tea plantations, to pineapple farms, to a stew that’s cooked in a volcanic pit, there’s so much to keep you occupied here – you should definitely set aside at least three days if you want to see and do everything.

For most people, Ponta Delgada (or just outside) is the easiest place to stay. Location-wise, it’s close to Sete Cidades (one of the main lakes) and the attraction that’s furthest away, Furnas (where you eat the volcano stew), is around 45 minutes by car.

If you aren’t planning on renting a car, it’s probably best to stay in Ponta Delgada. You can easily catch the hop on, hop off Yellow Bus from here and get collected for tours to places like Furnas as well.

São Miguel is home to some incredibly beautiful lakes, many of which are housed inside the craters of former volcanoes. Visiting at least one (if not all) is an absolute must.

Relax and take a dip in São Miguel’s thermal pools. There are several of them on the island, and each of them has their own charm.

Go urban exploring in this abandoned hotel. Although not an official attraction on São Miguel, thousands of people visit the ruins of the former 5-star Monte Palace Hotel every year.

See more things to do on São Miguel

Cozido is a popular Portuguese dish on both mainland Portugal and the Azores, although on the mainland it’s cooked on a stove and not in a volcano. It’s a very hearty dish, to put it mildly, and it probably wouldn’t be recommended other than for the fact that it’s cooked in a volcano.

It is, however, one of the “things to eat on São Miguel,” so something to add to your foodie bucketlist.

Note: Cozido das Furnas is cooked in volcanic pits beside Furnas Lake, just outside of Furnas, but to eat it you’ll have to go to one of the restaurants in Furnas Town Centre. A lot of restaurants require you to book in advance, especially during the busier months.

Read more about food from The Azores

São Miguel is home to two tea plantations, the only place in Europe where tea is grown. Well, that depends on where you consider European boundary to be: tea is also grown in Georgia and Turkey.

Gorreana Tea Factory is the largest and most popular of the two tea factories on the Azores, but Porto Formoso is also very charming and worth visiting. It’s also less busy, so a more enjoyable place to enjoy a cup of tea while looking out over the plantation.

You can easily buy tea from either of the two plantation in shops around São Miguel, but it’s definitely worth visiting at least one of the two factories to get a proper taste for it. Both actually have free tastings, and Porto Formoso has a short guided tour whereas Gorreana’s tour is self-guided.

Tip: The Azores is widely considered to be the only place in Europe where tea is grown, but did you know that coffee is grown on the Azores island of São Jorge as well? It’s quite a small plantation (basically just someone’s back garden), but it’s a coffee plantation all the same.

The regional beer of The Azores. Like Super Bock and Sagres, it does the job and is good for warm days but isn’t particularly memorable.

Melo Abreu, the brewery that products Especial, is situated in Ponta Delgada on São Miguel. One place you can try it as at the Melo Abreu restaurant, which is next to the Melo Abreu brewery (map). As well as their main lager, you’ll also be able to try a few of their darker beers.

Although the craft beer has grown rapidly in mainland Portugal, it’s been a little slower on the Azores. That said, there are one or two artisanl breweries here including Korsica which produces an APA, Brown Ale, Stout, Porter, several IPAs, and a Heffweizen.

Another craft beer to look out for is Cerveja Artesanal D’Associação by Associação Agricola De São Miguel.

Unless you’re coming from another island on the Azores, it’s likely that you’ll be arriving by plane. João Paulo II Airport, São Miguel’s regional airport, is the largest in the Azores and hosts flights from several of the other Azores islands, mainland Portugal, and international destinations like the US, Canada, and the UK.

There are lots of car rental options at the airport (by Azores standards anyway). If you’re not planning to rent a car, it’s also possible to get to your destination by taxi, airport transfer, or bus.

São Miguel’s cruise port is located at Portas do Mar, which is roughly a 10-minute walk from Ponta Delgada’s Town Centre. Many cruises will put on shuttle buses, which is good news for those that don’t want to walk.

But, if you’re planning on renting a car, you mightn’t want to do it straight away: you won’t need it in Ponta Delgada Town Centre so maybe give yourself at least a few hours to see that first.

The easiest way to get around anywhere in Portugal, and especially the Azores, is by car. It’s not as essential on São Miguel as it is on other islands where public transport services are few and far between, but it definitely makes life easier. It’s especially useful if you want to explore beyond the main tourist attractions.

There are plenty of car rental options at Ponta Delgada Airport, and there are also options in Ponta Delgada Town Centre as well.

Rentalcars.com and Skyscanner.net are the two best places to look for car rental. Almost all of the local car rental companies are listed on them.

Hop on, hop off bus

Yellow Bus Tours offer two hop on, hop off circuits of São Miguel: the Sete Cidades Tour and the Lagoa do Fogo tour. If you have time to do both, it makes sense to get the combined ticket. The combined ticket is valid for 2 days.

Between the two tours, you’ll visit most of the popular lakes on São Miguel including Lagoa do Fogo and Sete Cidades. You’ll also get to visit Ribeira Grande, another interesting town with some small attractions on São Miguel.

Neither of these tours go to Furnas so, if you’re planning on eating cozido (volcano stew) and seeing it cooking, you’ll need to book a separate tour for that.

There are quite a few tours available on São Miguel – enough that you can visit all of the main attractions by tour, including all of the lakes, Furnas, and more. There are also day trips to go whale watching and swimming with dolphins.

São Miguel has quite a good bus service by Azores standards, particularly on weekdays. You won’t be able to get absolutely everywhere by bus, but you will be able to get to most of the main towns on the island.

In the Azores, taxis tend to use fixed prices rather than a meter. These prices are the same with all taxi drivers, so there’s usually no need to worry about haggling.

After São Miguel, the next most popular island to visit is probably either Terceira or Faial, followed then by Pico. All of these islands are just a very short flight away, and you can get the ferry to Terceira some of the year as well.

The closest island to São Miguel, however, is Vila do Porto. It’s a small island with a population of around 5,000 people. It doesn’t have as many attractions as some of the other islands, but maybe that’s part of its charm as well.

If you’re planning on visiting all of the Azores islands, this is a good opportunity to visit Vila do Porto as you can only really get to it from São Miguel.

Of course, you also have the option of going onto Mainland Portugal as well. To compare flights, it’s probably best to use a site like Skyscanner do you don’t have to visit Ryanair, Sata, and Tap separately.