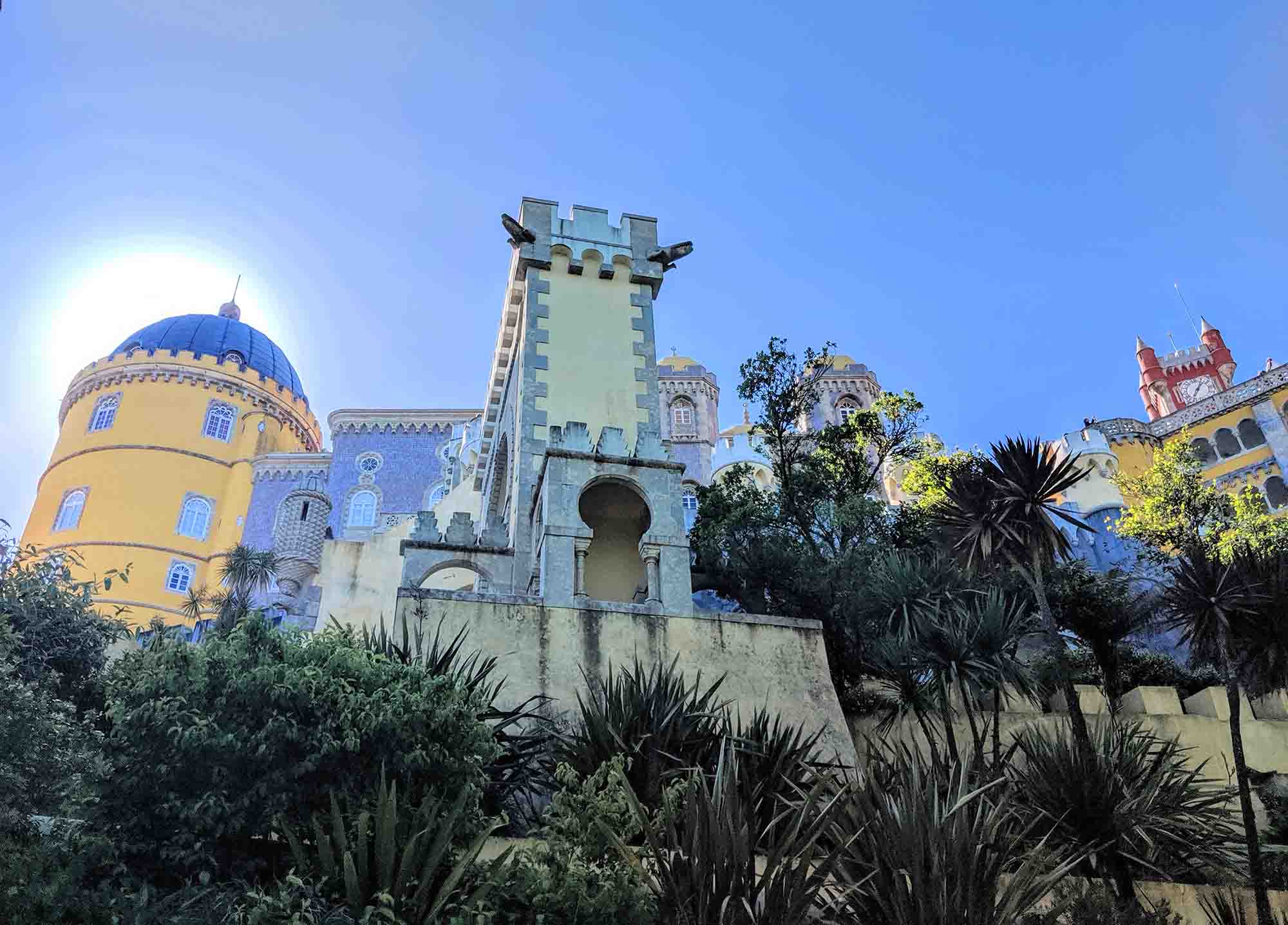 Visit Sintra and you will be surrounding by tuk-tuks, tourist trap restaurants, thousands of people taking selfies, and everything else that’s annoying touristy places.

But as annoying as all of that can be, it’s not worth missing Sintra over. Sintra is one of the most beautiful places in Portugal, and somewhere that you definitely should visit while you’re here.

Budget at least a day for Sintra. If you can spare two days, you’ll get to see a lot more and at a much more enjoyable pace as well.

A lot of people visit Sintra in a day and then go back to Lisbon, but that’s only enough to quickly see the 2-3 of the key attractions – not enough to see absolutely everything.

If you want to see everything, or you just want to take your time while you’re here, it’s best to allow two days for Sintra. If you’re happy just seeing the main attractions like Pena Palace, Castelo dos Mouros, and Quinta da Regaleira, and seeing them quite quickly, one day is enough.

While Sintra has accommodation to suit all budgets, it does seem to have a lot of boutique hotels and other types of more upmarket accommodation. For couples and anyone interested in treating themselves, Sintra has a lot of options.

The easiest route for most people is to take the train from Rossio Train Station in Central Lisbon (near Baixa and Chiado) to Sintra. The journey takes around 40 minutes and, as this is a popular commuter route, there are normally several departures per hour with departures throughout the day.

If you’re staying in or around Oriente (close to Parque das Nações and also Lisbon Airport), you can also take the train from Lisboa Oriente train station to Sintra (this train stops at Lisboa Entrecampos as well as several other stops).

This route takes just a few minutes longer (47 instead of 40) but is much faster than going to Lisboa Rossio first. Again this is a popular commuter route, so there are regular departures.

You can lookup timetables at cp.pt

Driving has advantages in that you can easily get to nearby places like Cabo da Roca and some attractions that are outside of the centre, however, it’s much easier to take the train than to drive. Parking in Sintra is difficult, and some of the streets can be narrow and crowded with tourists.

If you do decide to drive to Sintra, be sure to take the motorway: driving along the backroads is not easy and it’s also time-consuming.

There are reports of car break-ins in Sintra so avoid leaving valuables in your car. Ideally, stay somewhere with private parking.

Another way to get to Sintra is by tour, especially with a tour that’s going by tour bus.

The benefit of a tour is that they’ll often pick you up from your hotel so you don’t need to worry about going to the train station. Many tours also include stops like Cabo da Roca and Cascais and the tour is timed so that you have enough time to see everything.

Taxis are available from outside Lisbon Airport and at taxi ranks all over Lisbon. Uber is also available, along with other taxi apps like Bolt and Freenow.

So much to see and do. Some attractions will be a lot busier than others.

Pena Palace is one of the most beautiful attractions in Portugal, and it’s definitely somewhere to visit. While the outside of the palace is extremely busy, the inside isn’t too busy and the gardens (also worth visiting) are often practically empty.

Portugal has plenty of castles that you can visit, but Castelo dos Mouros is very different from most of the others. The walls bend and curve in a unique way, and it’s incredibly green as well.

Another of Sintra’s beautiful gardens, Quinta da Regaleira is equally worth of a visit. These gardens are usually much busier, particularly the The Initiation Well – one of the most popular attractions within the attraction.

Tickets to attractions in Sintra are expensive. Individually, you’ll pay around €13.90 for Pena Palace, €8 for Castelo dos Mouros, and €10 for Quinta da Regaleira. So, roughly €32 in total.

Everybody raves about the pastéis de nata, travesseiros de Sintra are definitely up there too and one of the best cakes that you can try while you’re in Portugal.

The filling of a travesseiros is made from ground almonds, egg yolks, sugar, and cinnamon, and it’s placed in pastry and baked until crunchy before being dusted with caster sugar. One bite and you’ll see why these have become so popular.

Although you can find them in other places in Sintra, and in some cafés in Lisbon, Piriquita really is the best place to try one. Piriquita has two outlets in Sintra: Casa Piriquita and Piriquita II.

Casa Piriquita is closed on Wednesdays and Piriquita II closes on Tuesdays. They’re both open the other days and, between the two of them, at least one is open every day of the week.

Queijadas are a common type of cake that you’ll find all over Portugal. As well as Queijadas de Sintra, there are also queijadas from other places Évora (Queijadas de Évora), or recipes that highlight a certain ingredient e.g. queijadas de laranja (orange), nata (cream), cenoura (carrots), amendoa (almonds), etc.

You can get Queijadas de Sintra at Piriquita as well as at plenty of other cafés in Sintra as well.

As well as regional dishes from Sintra, you’ll also find plenty of Portuguese favourites on restaurant menus in Portugal.

Dishes like caldo verde (a popular soup), bacalhau dishes, and alheira are all common on restaurant menus here.

The most out of the way attraction is probably Pena Palace. Unless you have the time (and energy) to walk up to it, it’s best to take the bus there.

Note: this bus service is badly-rated on TripAdvisor with many people complaining that it doesn’t show up on time.

It is possible to visit most of Sintra’s attractions on foot including Pena Palace, Castelo dos Mouros, and Quinta da Regaleira.

Although you will cover a lot of ground and will be tired by the end of the day, it will be a lot more peaceful than taking a crowded bus (assuming you like walking).

Walking to and from Pena Palace

There is a nice walk uphill to Pena Palace (the Villa Sassetti path). Follow this, otherwise you’ll have to walk along the road which isn’t too busy but will mean occasionally ducking into ditches as speeding tuk-tuks whizz by.

Hop on, hop off bus

There is a hop on, hop off bus that covers Sintra, but there are definitely other (and better ways to get around).

The audio commentary isn’t very entertaining and when the weather is bad in Sintra (which is quite common), the windows steam up and it’s impossible to see out of them.

Many reviews on TripAdvisor also suggest that the buses are packed and don’t turn up on time, which would obviously be be a big issue if you were visiting Sintra on a tight deadline.

Although you’ll see Tuk-Tuks all over Lisbon and Porto and now also in Sintra, they’re not native to Portugal – someone obviously saw them in SE Asia and decided that they would work well here as well.

That doesn’t mean you shouldn’t take one, of course, but, if you do decide to take one, look out for an eco-friendly one.

While it’s possible to find cheap eats, cheap accommodation, and to get to and from Sintra cheaply using the train, Sintra can be expensive.

Your biggest expense will probably be entrance to attractions like Pena Palace, but even small purchases like overpriced bottles of water can quickly add up.

Portugal is one of the safest countries in the world, but petty crime can be an issue in some touristy places. Sintra is one of those places.

Keep an eye on your belongings, particularly when in crowded spaces. There are also some reports of car break-ins,

How many days do you need for Sintra?

You can cover all of the main attractions in just one day, and many organised tours will include a visit to Cabo da Roca as part of that trip.

It will be quite a rushed day, however, particularly because many of the main attractions can be quite busy. If you can spare two days, it’ll be a much more relaxed and enjoyable.

What should I pack for sintra?