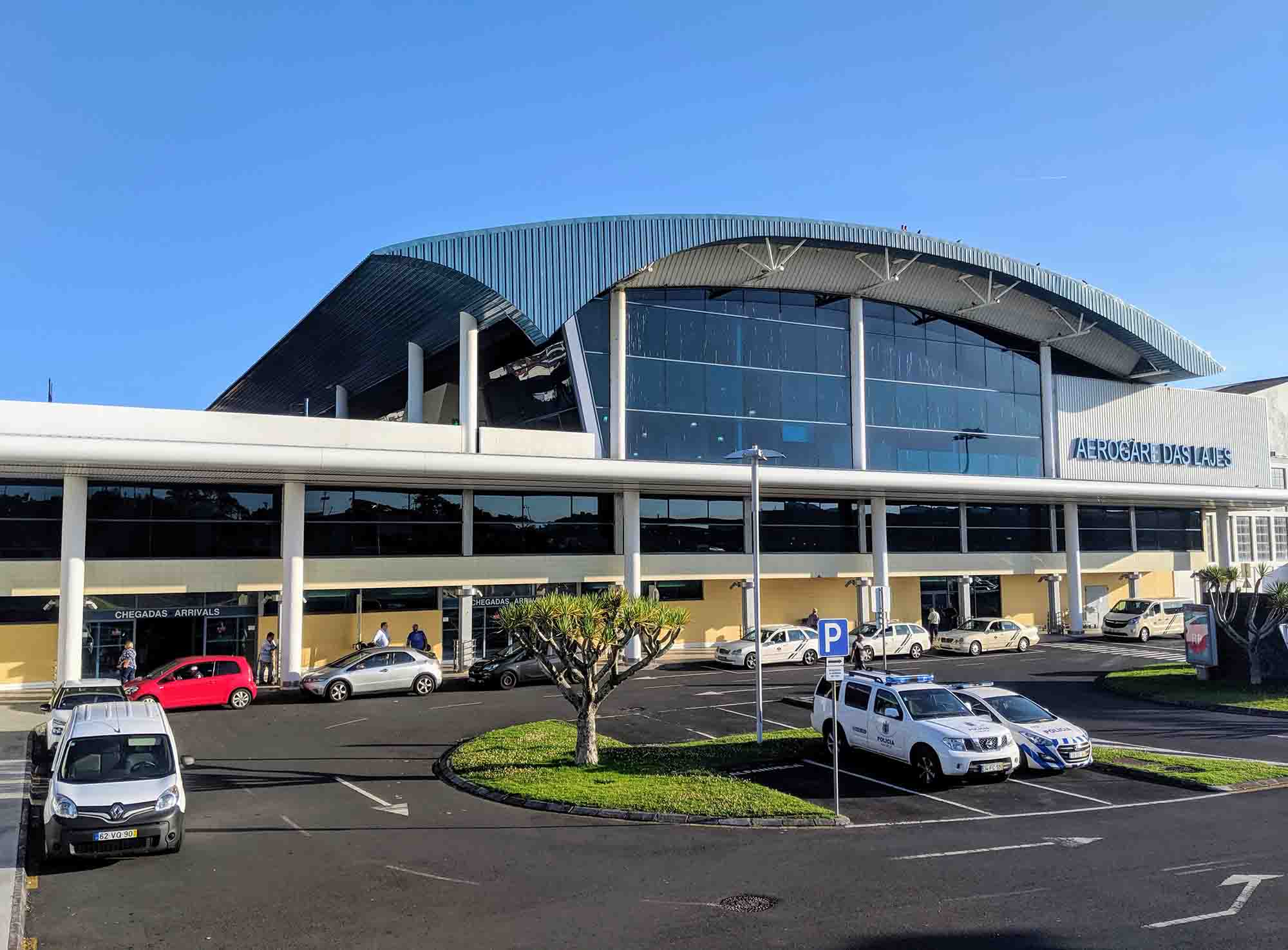 Terceira Airport (or Lajes Internacional Airport to give it its proper title) is the airport that serves Terceira, one of the main islands in The Azores. It is the second busiest airport in The Azores, after Ponta Delgada Airport on São Miguel, and the 6th busiest overall in Portugal (according to stats from 2017).

Although you can fly from Terceira to Lisbon and Porto, other islands in The Azores, and there are even some flights to Canada and the United States, this isn’t a particularly big or busy airport. I was able to get through security and to my gate in about 5-7 minutes, and that included a toilet pit-stop as well.

It’s always a good idea to arrive at the airport with plenty of time to spare. Normally it’s a good idea to allow 1 hour for domestic flights, 2 hours for European flights, and 3 hours for international to destinations like the US and Canada), but you don’t need to be as cautious at Lajes Airport.

Most people visiting Terceira will rent a car, as this is by far the easiest way to get around the island. Although it is possible to rent a car in Angra do Heroísmo or Praia da Vitória, the two main cities on the island, it usually makes sense to book it for your arrival.

Booking car rental in the Azores isn’t always easy as many of the car rental companies don’t list themselves on the comparison sites. Some do, of course, and I actually booked my car using rentalcars.com.

Rentalcars.com lists quite a few Azorean companies like Ilha Verde, Autatlantis, and Way2Azores (who I booked with) as well as a few more well-known brands likes Hertz.

Skyscanner.net is also worth looking at. They scan a lot of car rental comparison sites like Auto Europe and Holiday Autos, but they also showed me results for companies like Avis and Europcar.

If you can’t find what you’re looking for on these two sites, you’ll need to manually go through the car rental websites yourself. Here’s a list of the car rental companies that operate at Lajes Internacional Airport:

Rather than get a taxi first thing in the morning, you may decide it’s easier to stay at a hotel or Airbnb near the airport. The following airports are all within walking distance of the hotel.

I’ve stayed at both Hospedaria Casa D’Avo and Hotel Residencial Ermida dos Remédios. Both were close to the road so mildly noisy in the morning, but not a big deal if you are getting up for a flight anyway. I would stay in both of them again, but would probably choose Hospedaria Casa D’Avo of the two as it was slightly closer and had a shared kitchen.

Besides renting a car, you can also get from the airport to your accommodation by taxi or bus.

Taxis are available from outside of arrivals, and a single trip to Angra do Heroísmo costs around €16 (as of 2019). All of the taxi companies in the Azores seem to have fixed prices, so there’s no need to worry about haggling or anything like that.

Note: Taxis have the option of charging an additional fee for luggage (€2.50 per bag normally) and many take it. Airport transfer companies normally don’t charge this fee.

Uber and other taxi apps are not currently available in Terceira.

There are several companies offering airport transfers in Terceira. Normally it works out cheaper to book an airport transfer as opposed to getting a taxi at the airport, but this doesn’t seem to be the case here.

Still, there may be other reasons to book an airport transfer as opposed to a taxi such as convenience, needing an extra large vehicle, or wanting extras like a child seat.

Timetables can be found on evt.pt.

Terceira Airport isn’t really bursting with facilities, but I did notice the following:

As well as the café(s) in the airport, you’ll also find 1-2 snack bars and basic restaurants on the other side of the road in front of the hotel and a restaurant next door. (Don’t worry: crossing the road is very easy).

If you have a layover at Terceira Airport, don’t stick around. There’s really not a lot to do at the airport and you’ll quickly get bored.

Praia da Vitória is less than 5 km away or around 10 minutes by car, and you can easily get a taxi from outside arrivals. Praia da Vitória isn’t particularly big, but it does have a beach, a few attractions, and a handful of restaurants and cafés. It’s ideal for short layovers.

If your layover is even shorter, consider just going for lunch at one of the restaurants close to the airport like Marisqueira Sabores Do Atlântico.

Angra do Heroísmo is 20 km away or around 20 minutes by car. It’s larger and more interesting than Praia da Vitória, and you’ll find a lot more historical attractions, tours and activities (like whale watching), and restaurants. There’s also Silveira, a popular swimming area, which is just a short walk from the town.

If you have a full day, you may also want to hire a car and visit a few of the attractions dotted around the island like Biscoitos, Algar do Carvão, and Miradouro da Serra do Cume.