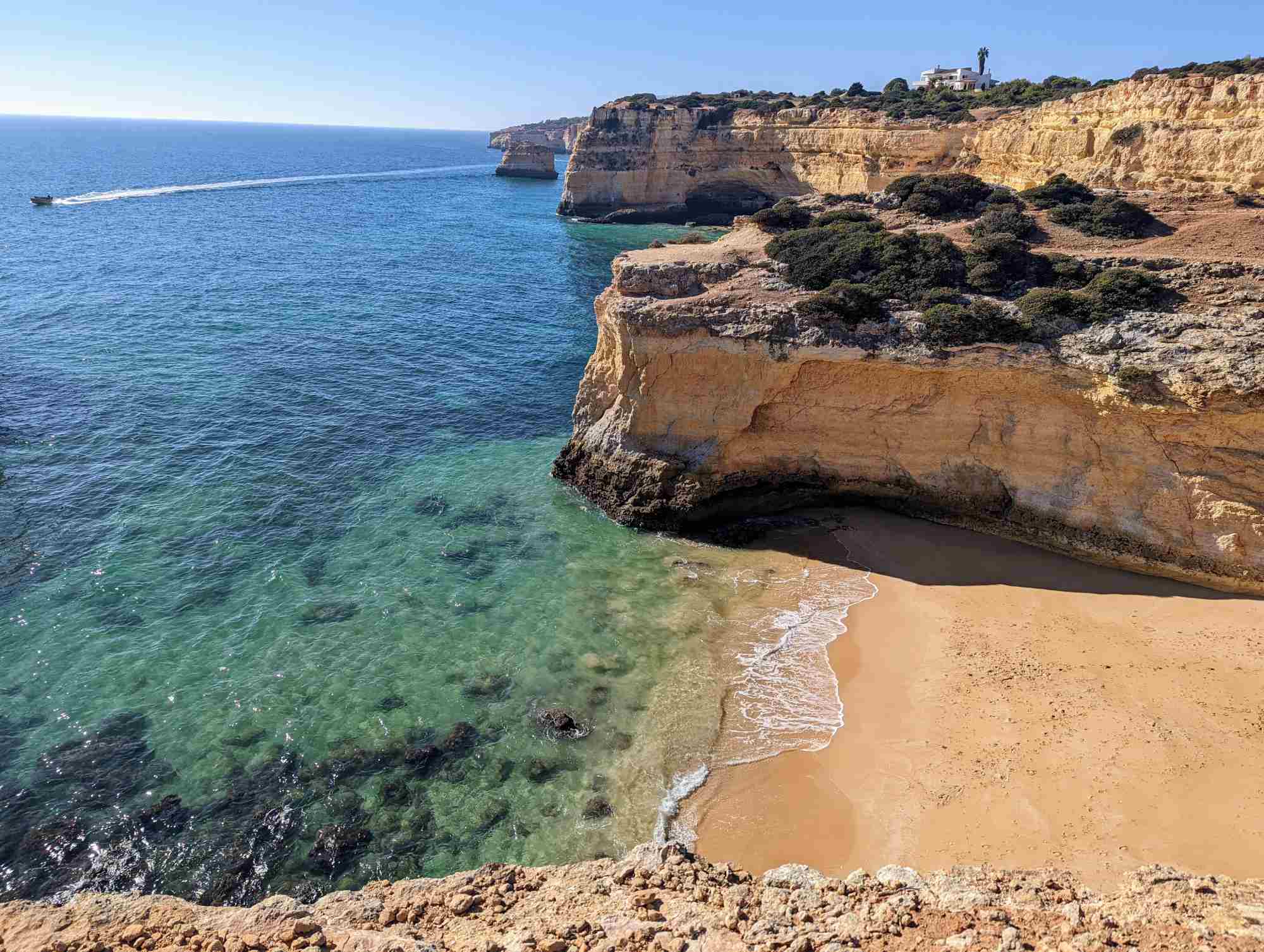 There’s a reason that a lot of people are moving to Portugal, or talking about moving here, and that’s because there are some many pros to living here. Yes, there are downsides to deal with, like bureaucracy and colder houses, but for the vast majority of people who move to Portugal, the pros outweigh the cons significantly.

First off, the weather. Portugal has fantastic weather, but the best thing about Portugal’s weather is the mild winters the south gets or the year-round mild weather that Madeira benefits from. Live in the Algarve and you could be eating Christmas dinner outside in 20°C weather while the rest of Europe is under a snowstorm. Lisbon isn’t quite as warm, but it enjoys some of the mildest winters of any European capital city.

There are a few caveats to understand about the weather, however. Firstly, Portugal doesn’t really have one climate but many. While people in the south of Portugal might be basking in the sun during winter, people in the north might be experiencing a damp, grey winter that’s similar to that found in Northern Europe. Also, regardless of where you are in the country, it’s quite possible that your property isn’t insulated which means that even if it’s warm outside, the property could be cold inside.

Summers can be hot too, especially if you live inland in somewhere like the Alentejo. But the incredibly hot weather usually only lasts a few months and there are plenty of things that you can do to keep cool (even if you don’t have air con).

A Feeling of Safety

There’s some debate as to how accurate the oft-quoted statistic of Portugal being the third safest country in the world is, but the reality is Portugal feels incredibly safe – especially when compared to the US, Latin America, and parts of the UK. It’s somewhere where children, the elderly, and women typically feel comfortable walking alone, even late at night.

In fact, Portuguese culture is incredibly family-friendly: children are adored and the elderly are treated with respect.

If you plan on working from home in Portugal (or gaming or keeping in touch with friends over Zoom and WhatsApp), the good news is that it’s possible to get high-speed internet in Portugal.

That said, you should check what internet options are available before buying or renting a property. It’s not unusual for fibre internet to be available in a town or city, but to not be available just a few kilometres outside, leaving rural residents to rely on mobile and satellite internet. Online internet checkers that just use your postal code are often incorrect so don’t rely on them: use our human-powered internet options checker instead.

This is a slightly trickier one, but for the most part, Portugal has a lower cost of living. Of course, it depends on where you’re coming from and what you’re buying. If you’re moving from New York or San Francisco to Portugal, you’ll notice a considerably lower cost of living. However, if you’re moving from the North of England or Spain, you won’t see a major difference and you might think Portugal is more expensive.

Portugal is cheap for some things and expensive for others. It’s cheap for eating out, for example, where a meal in a three-course lunch menu can cost you less than €10. However, other things like cars, utilities, and fuel are typically more expensive.

Again, it depends where you’re coming from. Americans typically find groceries and cell phone plans considerably cheaper than the US while many Europeans don’t notice a difference or find them more expensive.

Of course, it’s not just about price but the lifestyle you get for that price. There are few places where you can live close to the beach, enjoy fantastic weather, and eat out regularly for the cost of living that’s found in Portugal.

Portuguese beaches, particularly those in the Algarve, have been voted as some of the best in the world. So if your dream is to spend your time soaking up the sunshine and listening to the waves, this is definitely the country for you.

If you’re planning on living inland, you don’t be disappointed either. Whether it’s the Douro, Gerês, Azores, Madeira, or Serra de Arrábida, Portugal has plenty of areas of natural beauty for you to enjoy.

Particularly for Americans and those outside of Europe, Portugal’s tax-funded healthcare system is a big attraction. There’s no need to worry about having the right insurance when you go to the hospital: access to public healthcare is considered a right.

For Europeans, Portugal’s healthcare system is less of a novelty and in reality it suffers from many of the same problems as other European countries: emergency healthcare is good, but waiting lists for non-urgent treatment can be long – sometimes more than a year or two.

However, one area in which Portugal trumps many other European countries is in the cost of private healthcare. Health insurance and the cost of paying out of pocket are much lower than in many other European countries, and many expats are able to use the private system for the majority of their needs, which often allows them to access better quality healthcare than they would elsewhere.

Having a large expat community has its downsides – as it means people tend to integrate more into expat communities than local communities – but it’s definitely a pro when you first move. You’ll instantly be able to get to know other people, people in the same boat as you, and it’ll be easy to get answers to questions you have about settling in Portugal.

Although your intention might be to learn Portuguese, and to learn it to a fluent level, knowing that other people are likely to speak English is very reassuring – particularly when you’re speaking to a doctor, for example.

However, if you want to integrate even a little, you should definitely make an effort to learn Portuguese.

At any Portuguese market, you’ll find a great variety of fish and seafood and excellent fruit and vegetables. Most large supermarkets, similarly, will also have a large fish counter. Price-wise fruit and veg is much cheaper than the US, and the quality is better. By European standards, it isn’t particularly cheaper but the quality is better than in many Northern European countries.

Eating out in traditional Portuguese restaurants is also extremely affordable, particularly at lunchtime. Here €10-15 can get you a 3-course meal complete with coffee and wine. International restaurants are more expensive and often non-existent in more rural parts of Portugal,

Less variety and imported products are more expensive, but Great fruit and veg at the markets. Lots of great seafood and fish.

Prices are considerably less than they are in the US but similar to other European countries.

Less variety in terms of restaurants, but Portuguese restaurants are affordable. Also where there are foreign restaurants, e.g. Lisbon, great vegan and international restaurants

Portugal isn’t normally known for being a low-tax country, but in some cases it can be preferable to be a tax resident here. The most common is if you stand to benefit from Portugal’s NHR tax regime, which is a special tax regime aimed at newcomers and those returning to Portugal. It is particularly beneficial if you’re a high earner or have a particularly large pension but to be certain that you would benefit from it, you should speak to an accountant.

Another reason Portugal is considered attractive is its lack of a wealth tax, something which neighbouring Spain has and which can deter high net worth individuals from moving there.

If you don’t have an “EU Passport” and need a visa to move to a European country, Portugal can be very appealing for a number of reasons. Firstly, the visas are considered more attainable than other European countries: the D7, for example, requires you to have a regular income that’s at least more than €705 per month – an achievable amount for many people while the D2, or entrepreneurship visa, doesn’t specify a minimum investment amount.

For those that have cash to spend, the golden visa can be particularly appealing because it only requires you to spend an average of 7 days per year in Portugal in order to meet your residency requirements.

For many people, these attainable visas make Portugal a very attractive country as Portugal offers an easy route into Europe.