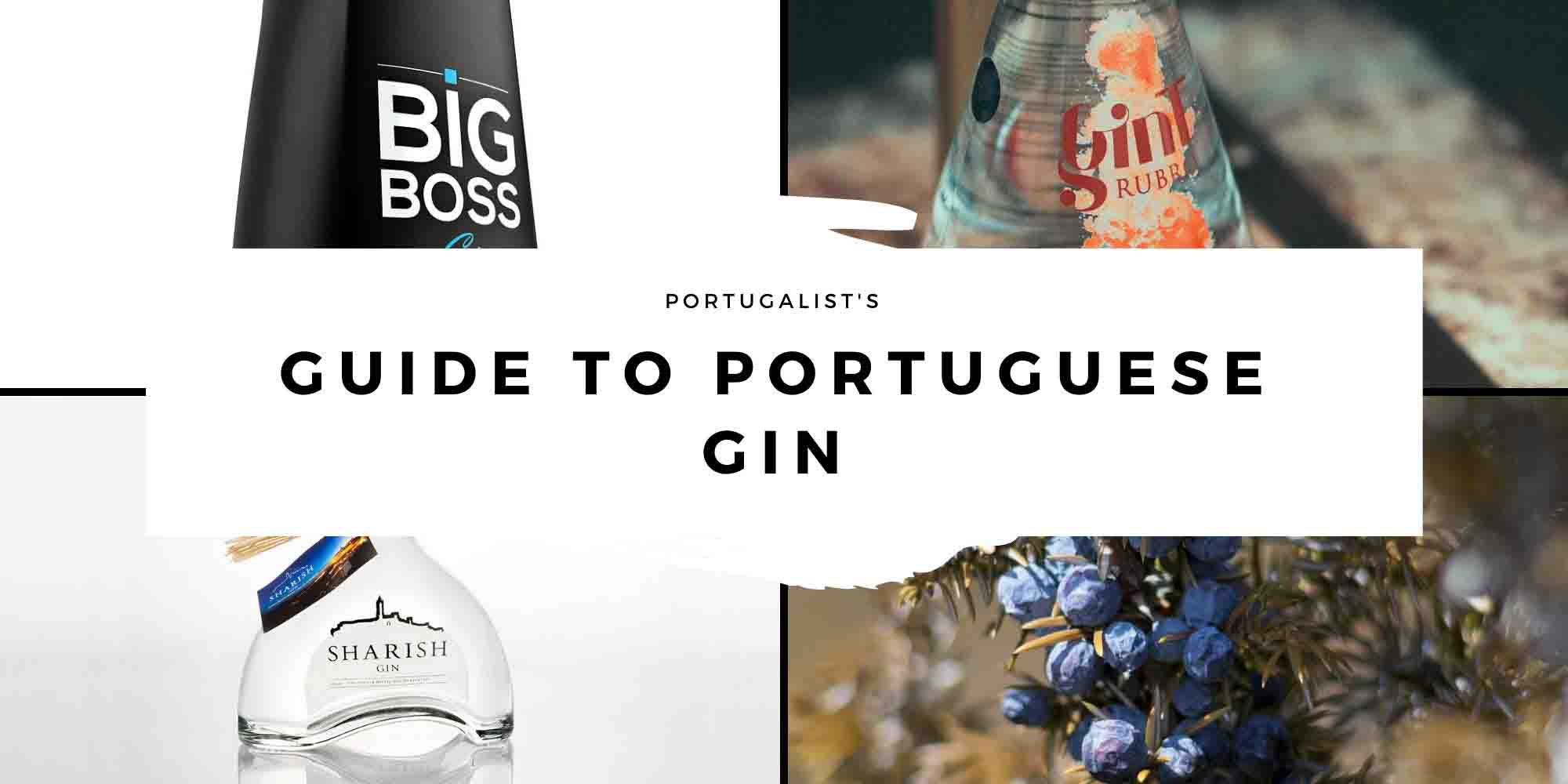 Portugal isn’t a country that’s normally associated with gin but, over the past few years, gin has become a regular feature on bar menus across the country: the quintessentially British spirit has started to become a staple in Portugal as well.

Interestingly, your gin and tonic mightn’t be made from Gordon’s, Bombay Sapphire, or Tanqueray. If you’re drinking gin in Portugal, there’s a good chance it could be made by Sharish, Big Boss Gin, Gin 13, or any of the other new gin producers that have opened shop in Portugal.

As with craft beer, the gin movement hasn’t been as big as it has been in other countries. Spain, next door, is miles ahead of Portugal in this regard, while other countries like the UK are even further ahead again.

The following are just a few of the gin brands to look out for in Portugal. If you don’t have any room in your suitcase to bring them back, you can also find some of them online or at specialist suppliers. You won’t find these gins everywhere, particularly the more rural parts of the country, but you shouldn’t have any trouble finding them in bars in Lisbon, Porto, and the Algarve, as well as in supermarkets across the country.

Note: With the exception of bigger brands like Sharish Gin or Big Boss Gin, the Portuguese gin is very artisan. In practice, this means it can be very hard to find some of these gins – even if you’re in Portugal.

Sharish may not have been the first Portuguese gin, but it’s quickly become one of the most famous. Sharish is produced in Portugal’s Alentejo region, a region normally associated with wine, and it incorporates many of the ingredients found in the region.

As well as its standard gin, Sharish also produces Blue Magic Gin. Blue Magic is particularly unique as the gin changes colour when it comes into contact with the tonic water.

Available from Amazon.co.uk (UK shoppers) and Gin Kiosk (UK). If you’re interested in visiting the distillery, Sharish offer daily tours at 11.00 and 15:30h (get in touch to make sure an English-speaking guide is available).

Templus has set it self aside from the rest by being Portugal’s first organic gin. Like Sharish, this gin comes from Portugal’s Alentejo and more specifically from the city of Évora. This gin has a juniper base as is infused with locally-grown peppermint and pennyroyal.

Big Boss Gin is one of the first, if not first, of this wave of gin producers to setup shop in Portugal. This Bairrada-produced gin is made from 11 different botanical ingredients including cardamom and angelica root, and the recipe is based on a year’s worth of research and testing.

As well as its standard gin, Big Boss also produces a pink gin that’s made from red fruits and has a slightly different and sweeter flavour to the original.

From: Guilhabreu, Vila do Conde

GinT Rubro is a Portuguese London Dry Gin with a whopping 58% ABV, making it one of Portugal’s only Navy Strength gins.

The signature botanical is fig tree bark, which gives GinT Rubro a distinctive aroma. As well as its unique aroma and botanical makeup, the other major characteristic of this gin is its bottle.

It has a distinctive shape and, in true Portuguese style, has a full cork in it rather than just a cork stopper. It’s finished with as red wax seal.

GinT Rubro is available from Apolónia Supermarket in the Algarve, El Corte Inglés in Lisbon, and Amazon.co.uk.

Gin 13 gets its name from the 13 different ingredients that are used to make this gin, ingredients like black tea, jasmine flower, and tangerine. As well as these ingredients, the producers also add hops and lemongrass extract to the recipe.

Available from Amazon.co.uk (UK), Master of Malt (many countries worldwide), and Gincubator (many European countries).

Friends has one of the cutest bottles of any gin producer anywhere in the world. It’s also the first gin to use touriga national grapes (Portugal’s main grape) and to age the gin in a barrel.

And while Gin 13 uses 13 different ingredients to get its unique flavour, Friends take its to another level and uses 38 different botanicals.

Gin Bollõtâ uses a particularly Iberian ingredient to differentiate it from the other Portuguese gins: bollõtâ acorns. These are the same acorns that the black pigs are fed. It works for Iberian hams like presunto and jamón, so maybe it can work for gin as well.

NAO gin is finished in a Port wine cask, a technique that’s normally associated with whisky production. Interestingly this gin is distilled in England, but bottled in Portugal.

Black Pig is an Alentejo-based distillery that produces gin, medronho, and as of June 2019, the first Alentejo rum.

This distillery is open to tours and tastings, where you can sample all three drinks that they produce as well as take a walk through their farm. For information about visiting Black Pig, contact the company via their Facebook page.

Friday Chic Gin uses vine leaves as one of its botanicals, along with other ingredients like cardamom, juniper, rose petals, and orange blossom. The gin is produced in Bairrada, another big wine-producing region that sits north of Lisbon.

Available from Amazon.co.uk (UK), Master of Malt (many countries worldwide), and Uvinum.co.uk (UK).

Tinto is a red gin that comes from Portugal’s Minho region. Locally grown ingredients like dill, blackberry, rosemary, and poppy are infused into the flavour along with perico, a local variety of pear. The red colour, in case you’re wondering, comes from the poppy infusion.

Available from Amazon.co.uk (UK) and Master of Malt (many countries worldwide). The company’s website also has a list of bars that stock it if you just want a sample.

Goshawk Gin is another gin from a remote part of Portugal, this time from the Azorean island of São Miguel. Goshawk is also the name of a bird found in The Azores.

As well as their main gin (premium), Goshawk also make several other gins which use Azorean flavours like pineapple, passionfruit, and mandarin.

If you’re in Portugal, but not on São Miguel, you can pick up a bottle of Goshawk Gin from Garrafeira Nacional. You’ll also find it at MadeInAzores.eu.

Portugal’s food and drink scene is constantly changing and evolving, as seen from the growth of both craft beer and gin over the past few years. Those aren’t the things that Portugal traditionally makes, though.

Take the time to sample a few different Portuguese Port wines. Most people know little about Port and view it as very old-fashioned. Spend a couple of hours learning about it and sampling all the different types (Ruby, Tawny, White, Crusted, etc) and most people come away as fans.

Then there’s ginjinha. It’s isn’t quite as big a deal as Port wine is, but it’s worth trying it if you’re in Lisbon or Óbidos.

Portuguese wine is also worth trying. Even the most knowledgeable European wine experts know very little about wine from Portugal, and it’s definitely worth giving a few varieties a try. Vinho Verde, a light and slightly sparkling wine from Northern Portugal, is always a crowd pleaser and especially in summer, but also be sure to try the reds from Portugal’s most popular wine regions: The Douro and The Alentejo are two good places to start.

The drink that’s most likely to appeal to gin lovers, however, is medronho. Medronho is a spirit made from the fruit of the Medronho or strawberry tree. The alcohol proof varies: what you’ll find in the supermarket is usually around 40%, but the homemade stuff (which is what tends to get drunk in Portugal) can be a lot more potent.

Medronho is often served as a shot at the end of a meal and, if it’s good medronho, it can actually be very pleasant. It’s also used to make cocktails, and you’ll find it on the menus in cocktail bars throughout the trendiest parts of Portugal.

Have you tried Portuguese gin? What did you think? Share your thoughts and reviews by leaving a comment below.

10 thoughts on “10+ Portuguese Gins That Are Worth a Tipple”