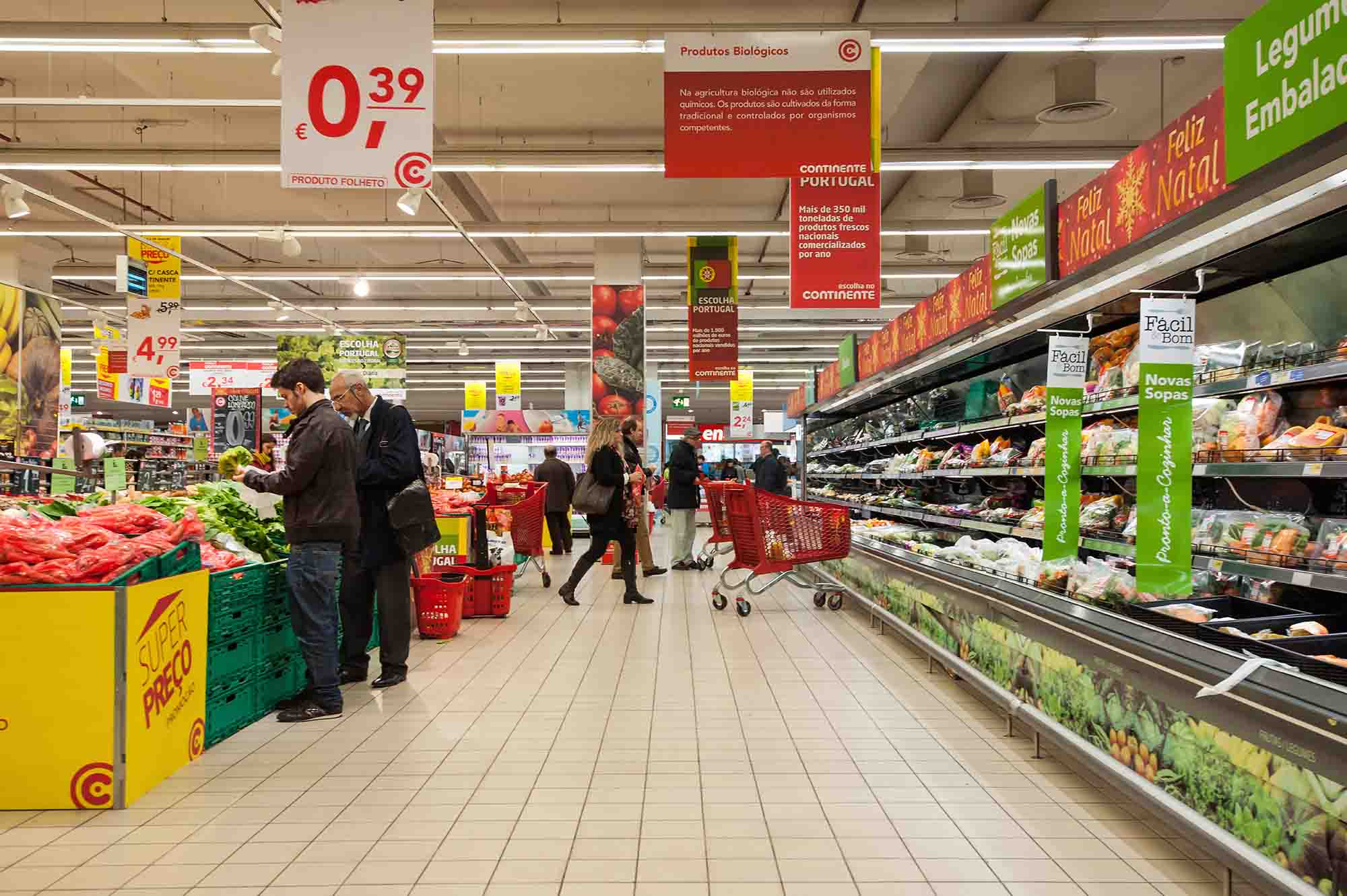 If you’re visiting Portugal for the first time, you may not know what all of the Portuguese supermarkets are. Some names you’ll probably recognise (Lidl and Aldi, for example), but you may never have heard of Continente, Pingo Doce, or Auchan.

It’s often a good idea to check if there’s a supermarket near where you’re staying. This is especially true if you’re self catering or if you’re moving to Portugal long-term.

Don’t forget markets as well. The markets in Portugal have fantastic fruit, vegetables, meat, and fish, and are often cheaper than the supermarket anyway. Even if you only have a small supermarket nearby (like a Spar or a Minipreço), you can easily get by if you’re near a municipal market.

Continente is the largest supermarket chain in Portugal, with stores located throughout mainland Portugal and on some of the islands (Madeira and São Miguel in The Azores).

Continente promises delivery through all of mainland Portugal so, if you’re looking to do your weekly shopping online, this is definitely a supermarket to look at.

Pingo Doce is another large Portuguese supermarket chain, with stores throughout mainland Portugal and on Madeira as well.

Like Continente and its other competitors, it sells everything from fresh fruit and vegetables and other essentials in its smaller city centre stores to appliances and electronics in its larger hypermarket stores.

Previously known as Jumbo, Auchan is one of the larger Portuguese supermarket chains. Its store include both small city-centre outfits as well as larger hypermarkets that are usually located on the outskirts of towns.

As well as its grocery store products, many of the larger Auchan stores also store electronics and appliances – everything from televisions to blenders (previously called Jumbo Box).

Although it has less stores than both Continente and Pingo Doce, Intermarché has stores located throughout all of mainland Portugal as well as petrol stations and camping spots for caravans.

Lidl is a name anyone living in Europe will be familiar with.

Its famous for producing good quality products, but not much in the way of choice. As with its competitor, Aldi, some people love this and some people hate it.

Regardless, it’s one of the most common supermarket chains in Portugal and one that may be near where you’re staying.

Aldi is very similar to Lidl but people usually have a strong preference between the two. Like its competitor, Aldi is known for its simplistic approach to retail display and its focus on good quality, affordable products.

Mercadona is the largest supermarket chain in Spain, and it’s now expanding into Portugal as well. Currently, you’ll only find Mercadonas in Northern Portugal, but it’s likely that it’ll spread further south as time goes on.

The international food products in most Portuguese supermarkets is usually quite lacking, and often it makes much more sense to go to a supermarket that specialises in products from that country.

Chinese & Asian supermarkets are most common in larger cities. Lisbon, in particular, has several located in and around Martim Moniz.

Outside of the major cities, it can be difficult to find somewhere that sells specialist Asian products but, thankfully, there are a few online options.

Ayur, an Asian food store in Lisbon, for example, stocks all kinds of products from China, Thailand, Japan, and even the Middle East.

There are a number of British food supermarkets and small shops in Portugal, particularly in the Algarve where most British expats are located.

The largest of these is Overseas Supermarket, which stocks a variety of products from Iceland and Waitrose, and has stores in Guia (Algarve Shopping) and Portimão.

There are smaller British supermarkets in other parts of Portugal, such as British Supermarket in Albufeira and G B Store in Cascais. And, of course, it’s possible to order just about everything from places like British Cornershop.

Brazilians make up the largest number of non-Portuguese living in Portugal, so it’s no surprise that there are plenty of Brazilian supermarkets in Portugal particularly in places like Lisbon and Porto.

In both Lisbon and Porto, the main supermarket is Mercado Brasil Tropical.

Those that don’t have a local Brazilian supermarket will find everything they need, from Tapicoca flour to Paçoca, at online shops like Sabor Brasil.

1 thought on “Supermarkets in Portugal: A Guide to Online & Offline Shopping”