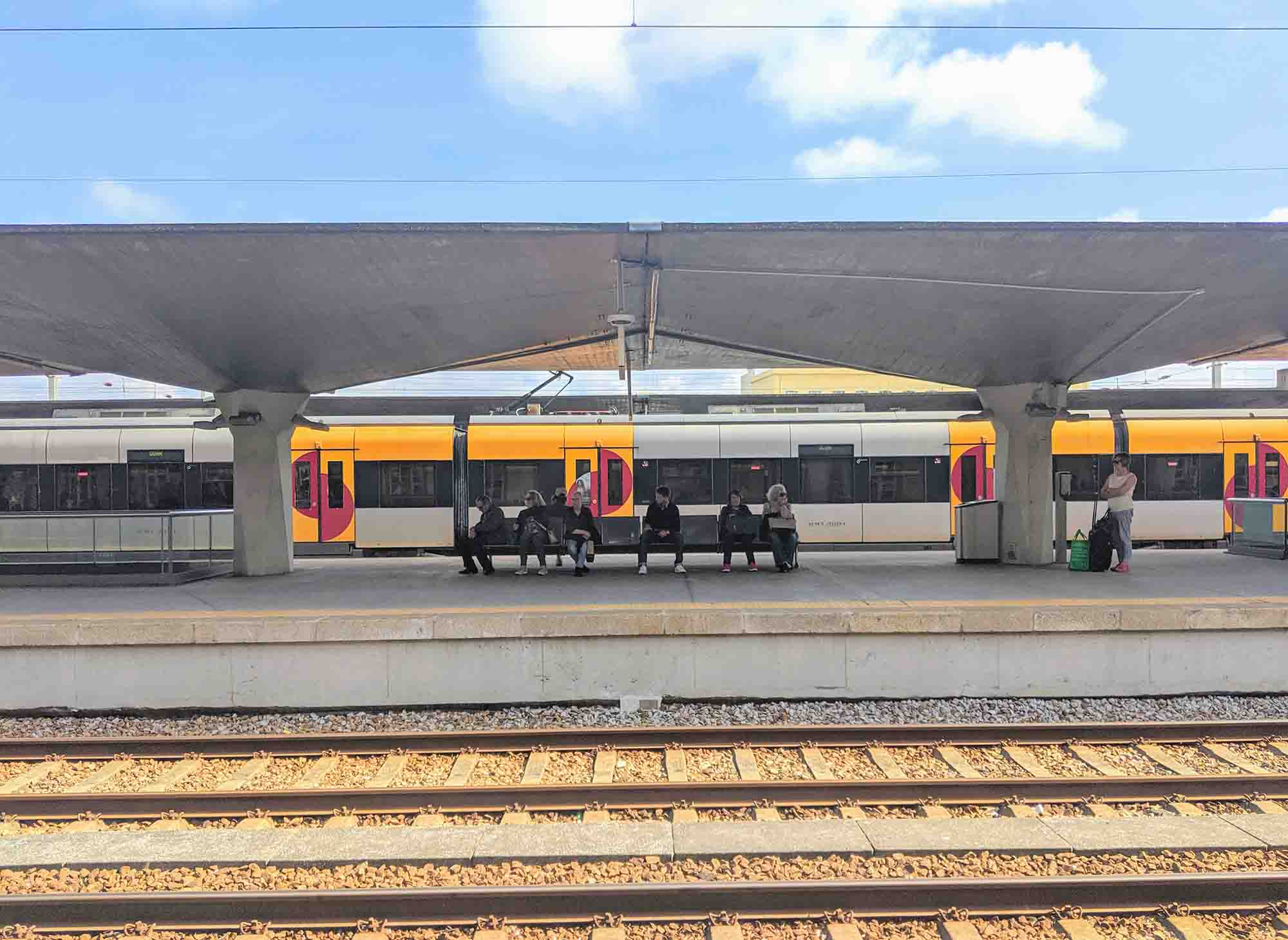 Portugal has a great train service. It’s old, and it’s a little slow in comparison to the trains in many other European countries, but it’s functional. Sometimes the air con even works as well!

There are four different types of train in Portugal:

Train routes run throughout Portugal and connect all of the major regions by rail. Not every town has a train station, but the majority of the large towns and cities do. If you can’t find a train to the town that you want to visit, it may be worth looking at taking a bus or renting a car instead.

It’s cheap (and here’s how to get it cheaper)

What’s amazing about Portugal’s train service is the cost. Here are some sample prices (accurate at the time of writing, and still a good estimate):

All of those prices are for second class tickets booked more than eight days in advance to take advantage of the discounts. These are:

Note: Discounts aren’t available on all the tickets. The 7 am train pictured below doesn’t have any discounts available, for example.

Those are for the Intercidades (IC) and Alpha-Pendular (AP) trains. The Urban trains (which can’t be booked in advance) are often even cheaper. These trains aren’t everywhere in the country, but are especially common around Lisbon and Porto.

As well as advanced tickets, there are also discounts for:

You can select any of these discounts when you’re booking online. If you have booked in advance, this is usually the best discount you can get. You can select a Senior Citizen or Under 25 discount, but this will actually be less than the advanced promo price. Unfortunately, you can’t combine discounts e.g. 5 days in advance and under 25.

Tickets can be booked through cp.pt, which is the official website for Comboios de Portugal (the Portuguese train company). You can pay with a credit or debit card or with PayPal. Some people have problems paying with a foreign credit or debit card: if that happens to you, try paying through PayPal (you don’t need a PayPal account to do this).

There are three types of train used in Portugal (Alpha-Pendular, Intercidades, Regional (R) and Interregional (IR), and Urban (U)) and only Alpha-Pendular and Intercidades offer a first and second class option.

First class on Alpha-Pendular usually means you get a drink, a newspaper or magazine, and headphones. First class on Intercidades usually just means that you get larger and comfier seats and, on some seats, a plug socket (plug sockets are also available on some seats in second class).

You can also book single seats on both Alpha-Pendular and Intercidades trains. This alone could be worth it if you’re travelling alone, and want a bit more space to yourself. The difference between first and second class is often less than 5 Euros, so it’s not a lot to spend to treat yourself to a little extra comfort.

Do the trains have Wi-Fi?

Increasingly more and more trains in Portugal have wi-fi, especially the Alpha-Pendular routes, and sometimes it even works (but usually it’s very slow).

Unfortunately, although some trains do have working wi-fi, it’s not a given which means you can’t rely on it if you want to work. 3G and mobile internet connections are also pretty unreliable on the train, particularly when you’re going through more rural parts of the country, and the trains are also quite jiggly which can make you feel sick if you’re staring at a laptop screen. It’s fine for watching a movie, but not great for trying to work.

The Comboios De Portugal (Portugal Trains) website is reasonably easy to use, and is one of the easiest ways to buy train tickets. There’s also an app for both iOS and Android, or you could buy your tickets at the counter in a train station.

A lot of people use Rail Europe for booking train tickets while travelling in Europe, but it’s much better to use the official website. Rail Europe doesn’t always have all the timetables, you can’t book tickets same day or next day for Portuguese trains, and you don’t get access to the discounts. Just use cp.pt instead.

If your long distance train journey includes a change onto a regional train, sometimes you can buy the whole journey in one ticket (this is the case when going from Lisbon to many places in the Algarve, for example). This isn’t always the case, though, and you may need to buy that ‘R’ ticket of your journey on the day.

Credit card problems? Try paying with PayPal instead (you’ll see the option at checkout). You don’t need to have a PayPal account to do this: you can pay with your card using PayPal.

A lot of people have asked questions about travelling on the trains with luggage.

Yes, you can bring a suitcase or backpack onboard the train. Every passenger is entitled to bring one piece of luggage (such as a suitcase or a backpack) and a small bag like a laptop bag or handbag. Any more than that is considered excess baggage and you should have to pay extra to bring it but it’s not monitored.

Luggage storage is generally in a rack above the seats. The racks are wide and can easily take a backpack or a cabin-size suitcase, but may not be suitable for a very large suitcase.

On the long distance AP and IR trains, there is normally a space for extra large bags at the entrance to each carriage (and sometimes in the middle of the carriage as well) however these can fill up.

If you’re concerned about travelling with luggage, especially large suitcases, consider taking a coach instead. Baggage is stored underneath the bus so there’s more room for wider suitcases and you don’t have to lift it above your head.

Yes, you can travel with a pet (for free) on the trains in Portugal as long as the pet is not dangerous, is housed in a properly enclosed transportation box, and as long as they don’t smell or there isn’t any reason that other passengers might object to travelling with them.

On some trains, it’s also possible to travel with a dog that’s not in an enclosed transportation box. The dog will need to be muzzled and on a short lead, and the owner will need to bring the dog’s vaccination card and valid licence with them. They’ll also need to buy a ticket for the dog as well.

Guide dogs can travel with the owner on all trains for free.

For more information about travelling with a pet on Portuguese trains, visit CP.pt.

Yes, you can bring your bike onboard any intercity train (e.g. from Lisbon to Faro). There is normally space for 1-2 bikes per carriage, and passengers are normally limited to 1 bike per passenger.

More information about travelling with a bike can be found on CP.pt.

If you want to see the train timetables, the easiest thing is to enter your dates and do a search. If you click the (+) button, you can see a list of all the stops on the journey.

International Tickets: Portugal to Spain, France & the rest of the world

It’s not possible to book international train tickets with CP.pt. There’s a route from Lisbon to Madrid, for example, but you need to book this through the Spain train website, Renfe.es.

Travelling further than that is even more complicated. I wanted to see if it was possible to book a train ticket from Lisbon to Barcelona or Lisbon to Paris, but neither RailEurope, GoEuro, or thetrainline.eu could do that for me. If you want to do an international trip like this, you will need to book all of the train tickets for each individual leg.

84 thoughts on “Portugal Trains: How to get around Portugal by Train”