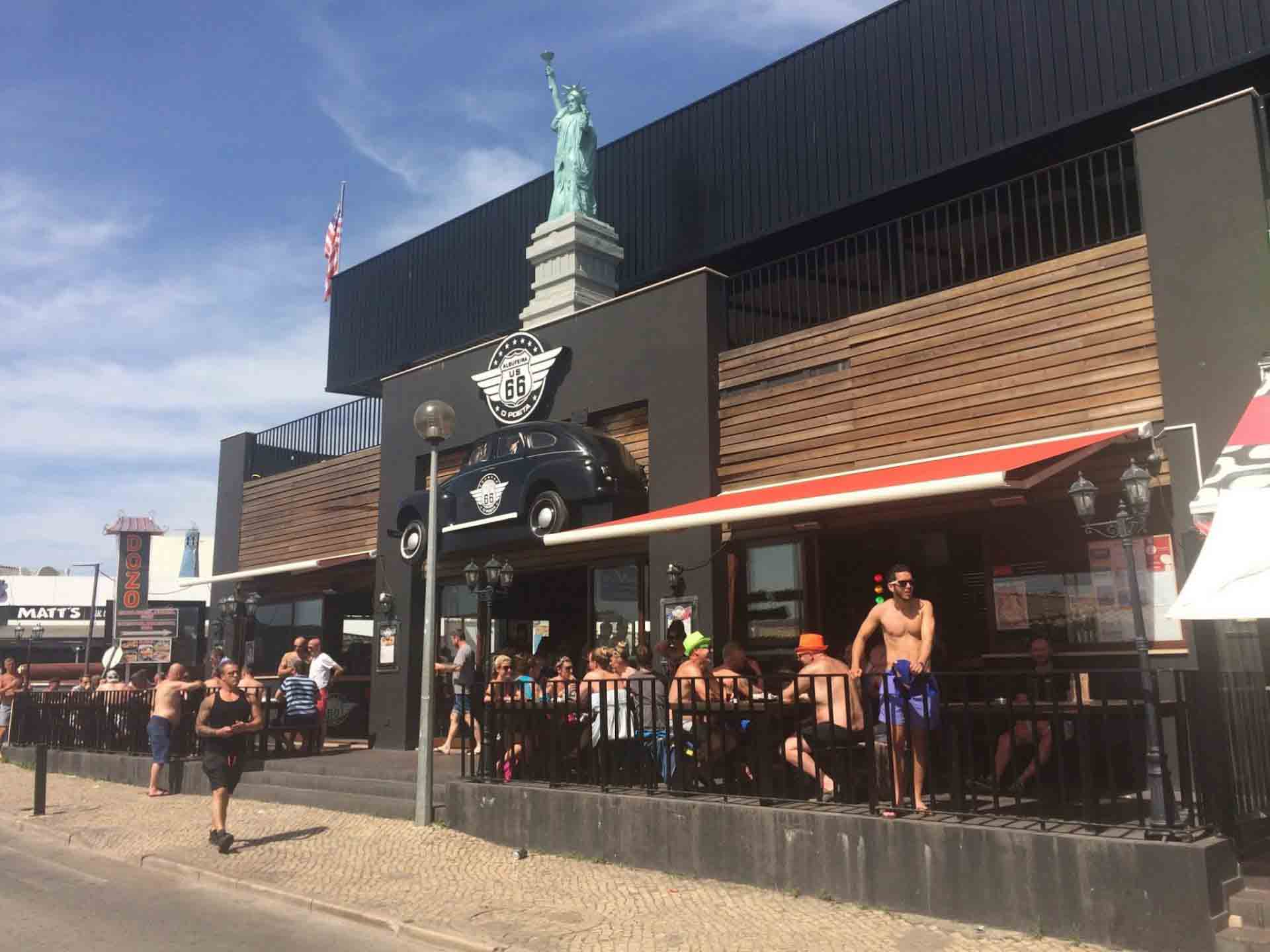 It’s a long road of nightclubs, bars, restaurants, and cafés serving full English breakfasts that’s buzzing all day and stays that way well into the early hours of the morning. If you follow the strip to the end, you’ll get to “Cardiac Hill” which takes you down to Praia da Oura (Oura Beach).

Accommodation on and around The Strip

You’ll find all kinds of accommodation in and around the strip, including hotels, villas, and Airbnbs.

Hotels near The Strip

There are several well-rated hotels within walking distance of the strip including:

Villas & Apartments near The Strip

Need more hotel options? See the list of the best hotels nearest The Strip. Alternatively, if you want to be closer to the Old Town, check out these top hotels in (or near) Albufeira’s Old Town.

Who’s The Strip for?

If you’re looking for cheap drink promos and partying, then The Strip is definitely the place for you.

Although The Strip has always been the livelier bit of Albufeira, over the past few years it has really cemented itself as the destination for lad’s holidays (and girl’s holidays), stag dos, and hen parties.

If that doesn’t sound like it’s right for you, and you’re looking for something quieter, take a look at Albufeira’s Old Town. There are still plenty of bars here, and the party can still go on quite late, but it has a more relaxed and more family-friendly vibe than The Strip.

Alternatively again, you could visit one of the many other towns on the Algarve like Alvor, Praia da Rocha, or Carvoreiro.

There are quite part of The Strip, of course, particularly the top end where there are a couple of quiet bars, some restaurants, and ice-cream parlours. The bottom half (or Areias de São João part) is the lively part and this is where the majority of stag and hen parties end up.

Things to do on “the strip”

The strip is made up of bars, restaurants, nightclubs, and a few cafés and the order of business here is eating and drinking. There are also a few ticket outlets and shops selling everything from sunscreen and flipflops to postcards and phallic bottle openers.

Bars on The Strip

Probably every second business on the strip is a bar, so you won’t find any shortage of places to drink here. Most have drinks deals such as free shots or two-for-one cocktails, and you’ll often find bar staff standing outside trying to lure you in.

Matt’s Bar (famous for its bucking bronco), Sunset on the Strip, and Wild & Co. are some of the most popular bars on the strip, but there are bars to suit every taste including gay bars, Irish bars, and karaoke bars.

Clubs on The Strip

As well as plenty of bars, the strip is also home to two of Albufeira’s most popular clubs: Club Heaven and Club Vida.

Kiss, while not technically on the strip, is only a 5-10 minute walk from the bottom of the strip. You’ll find it on Rua Vasco da Gama (Google Map).

Restaurants & Cafés on The Strip

Have you been to the strip? Do you have any recommendations of bars, restaurants, or places to stay? Let other people visiting Albufeira know your best tips by writing a comment below.

36 thoughts on “A Guide to Albufeira’s Famous Strip”