Skip to content
Home › Portuguese Food & Drink › The Cataplana: The Best Pot You Can Get in Portugal 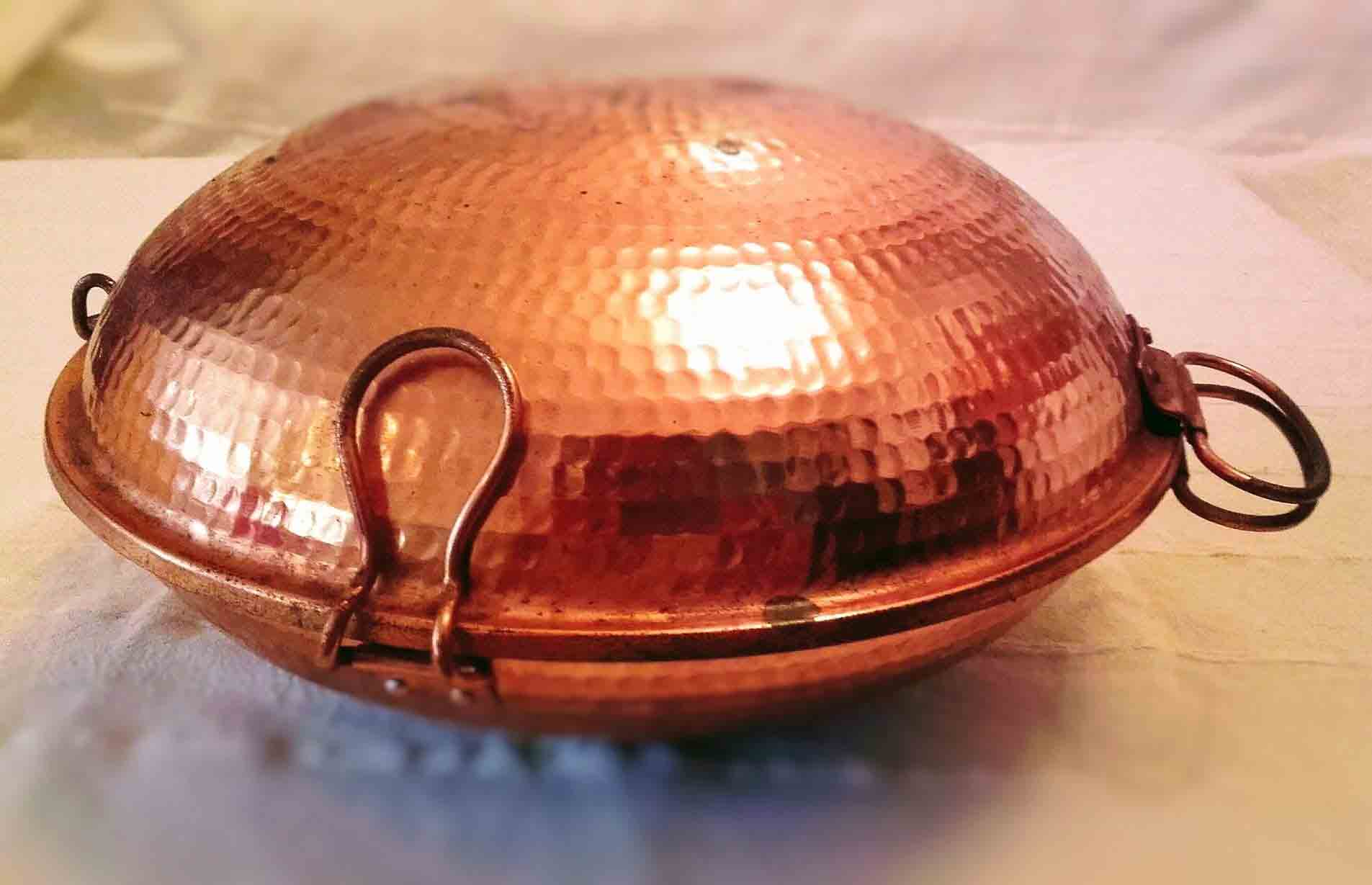 The cataplana is a clam-shaped cooking pot that originates from the Algarve in Southern Portugal, and this is where you’re most likely to find cataplana dishes on the menu. Originating from the Algarve means that a lot of cataplana recipes are fish or seafood-based, although they are quite a few meat-based recipes out there as well.

The cataplana is one of Portugal’s tastiest dishes, and it’s definitely worth trying a cataplana dish while you’re visiting. Most restaurants require a minimum of two people, so you may have to convince someone else but don’t worry: they’ll thank you after. Be sure to keep some bread aside for mopping up the juices at the end.

Cataplanas are traditionally made of copper (although they were first made from zinc), but a lot of the more modern cataplanas are made from materials like aluminium and stainless steel. Each side of the cataplana is shaped like a clam or wok, and they’re connected by a small hinge. One side is placed onto the heat and filled up with the ingredients – it can be anything as long as there is some form of sauce – and then the lid is closed and left to cook.

It’s nowhere near as airtight as a pressure cooker, but it does trap a lot of the steam and is kind of like an early prototype of a pressure cooker. It’s often compared to a tagine, and there’s a theory that the cataplana may have been invented while the Algarve was under Moorish rule.

Copper cataplanas distribute the heat evenly, and this is one of the reasons that they’re so great for cooking with. They also have a set-and-forget quality to them, much like a slow cooker, allowing you to multitask while making dinner.

Aside from the taste cooking in a cataplana gives, it’s also fantastic for serving. Most cataplanas come with a cork stand, which allows you to put the cataplana in the centre of the table. It’s very presentable, and it saves you the effort of serving everyone up in the kitchen as well.

You can buy a cataplana in the Algarve, either at a specialist shop where you’re more likely to find the prettier and more traditional copper cataplanas or in the supermarket where you’re more likely to find the more modern and cheaper steel and aluminium cataplanas. They are quite bulky, though, so you may be better off ordering online than trying to squeeze one into your suitcase.

If you want to order online, you’ll find cataplanas on Amazon as well as at specialist online shops like cataplana.com. They’re great to have in the kitchen, and they make for very unique gifts for the chefs in your life.

A lot of those are fish-based, but that doesn’t mean you can’t cook meat in a cataplana. You absolutely can. Boned meat, particularly chicken, lamb, and goat all tend to work well in the cataplana but feel free to throw in whatever you feel like.

Onions, tomatoes, garlic, white wine, and herbs all feature in traditional Portuguese recipes, but don’t feel like you have to stick to what feels traditional. Although some people might think it’s sacrilege, cataplanas are great for making curries and soups and other international dishes.

And, if you fall in love with cataplana dishes, be sure to check out the annual Castro Marim Festa da Cataplana (Cataplana Festival) which usually takes place in the Algarve in June.

Have you tried a cataplana dish? Do you own a cataplana? Share your love for this unique Portuguese pot by leaving a comment below.

Hi, I'm James. I'm the main writer at Portugalist, and the guy who set it up. I started Portugalist because I felt there was a real lack of good quality information about Portugal and I wanted to change that. I lived in several parts of Portugal, like Lisbon and the Algarve, and I even spent 5 years living in the North of Portugal as a kid. Since returning to Portugal as an adult, I've visited every part of Portugal.
About this article
This article was first published in October 2018. It was last updated on May 20, 2020.
Corrections & Suggestions
We try to keep articles as up-to-date and as error-free as possible so, if you spot a mistake or have a suggestion for the article, please let us know.
How Portugalist earns money
This article may contain affiliate links. This basically means that Portugalist might earn a commission if you choose to make a purchase through the links in this article. This is at no additional cost to you and it does not affect our editorial standards in any way.
Portugalist.com is a participant in the Amazon Services LLC Associates Program, an affiliate advertising program designed to provide a means for website owners to earn advertising fees by advertising and linking to Amazon (.es, .co.uk, .de etc) and any other website that may be affiliated with Amazon Service LLC.

6 thoughts on “The Cataplana: The Best Pot You Can Get in Portugal”