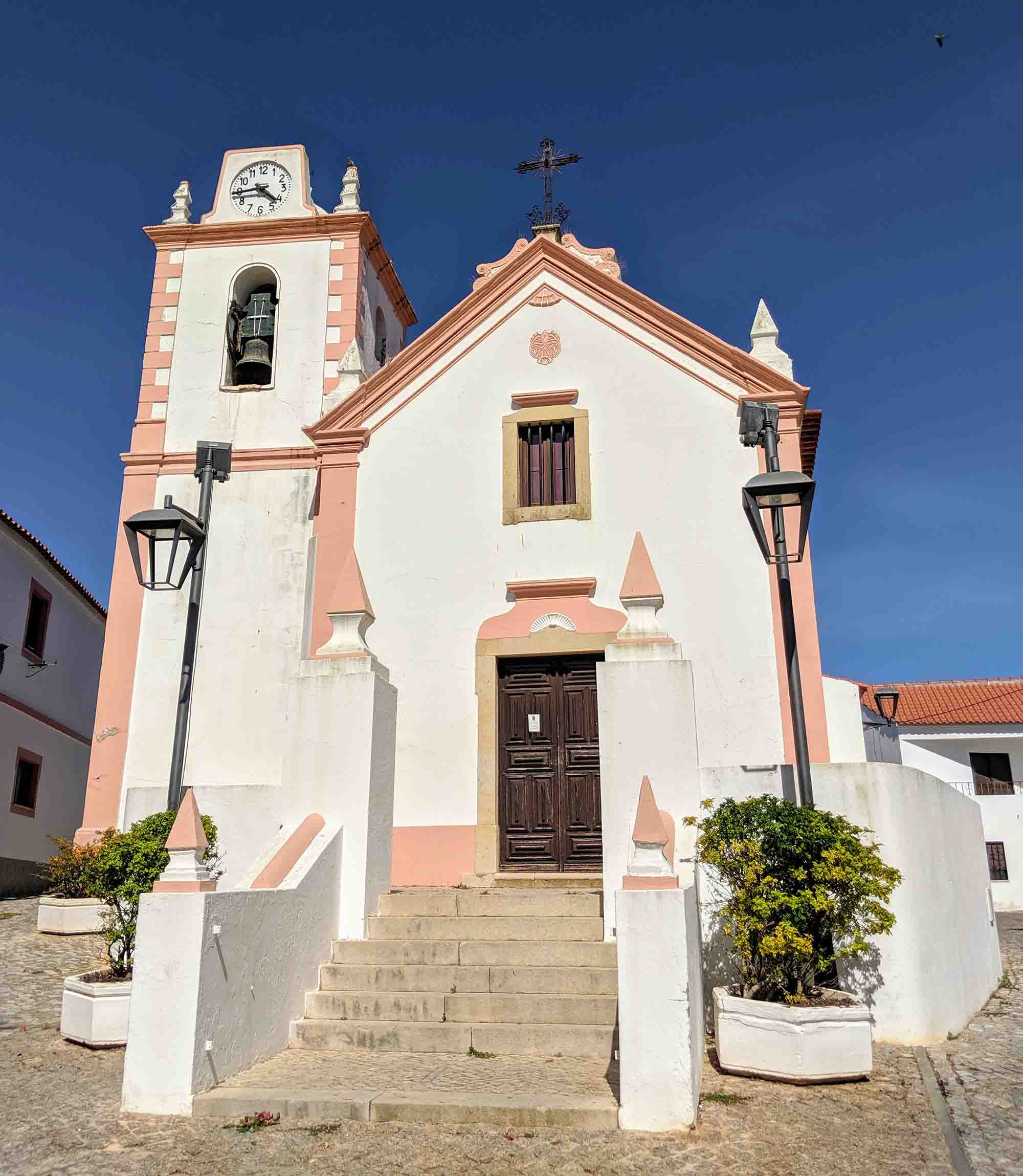 According to local oral history, the town of Guia was established after the Virgin Mary appeared to some people there.

It’s difficult to know whether that was actually the reason Guia was established. The Nossa Senhora da Guia hermitage was built sometime in the 1600s and Guia became a Parish in 1617 but, aside from local stories, there’s very little to explain how the town came to be.

Guia could well be another Fátima, a sacred place for Catholics, had records been better kept, but today the town is famous for two things: piri-piri chicken and the Adega do Canto vineyard that Cliff Richard founded.

In recent years, Guia has also become a popular place to stay on the Algarve due to its proximity with Albufeira and nearby beaches like Praia dos Salgados and Praia da Galé Oeste. It’s also just a short drive other towns like Porches (famous for its pottery), Armação de Pêra, and the Zoomarine Theme Park.

Handpicked accommodation in (or near) Guia

Tours & things to do in Guia 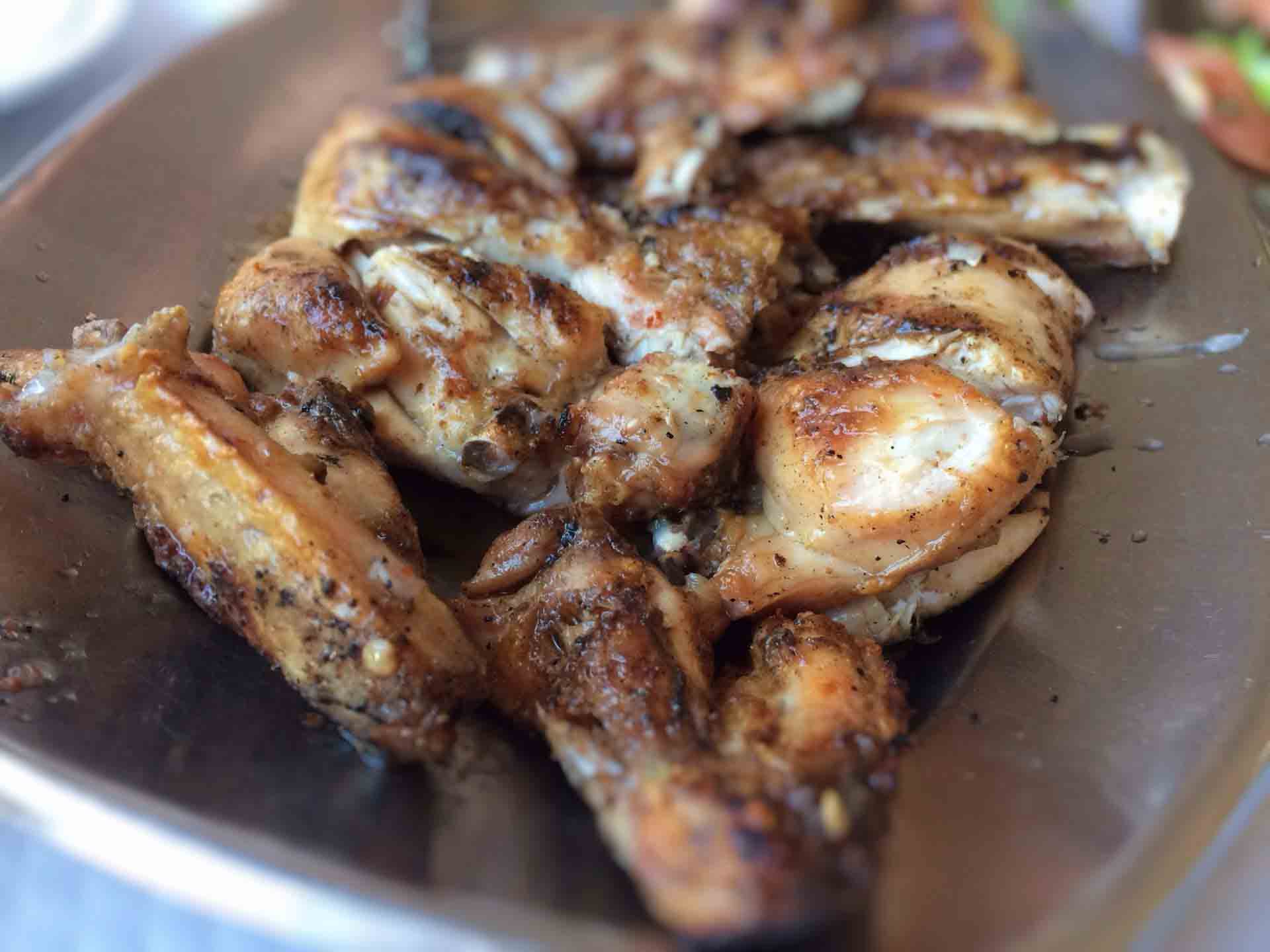 According to the plaque outside Ramires, the most popular piri-piri restaurant in Guia, José Carlos started grilling chicken in 1964. This was around the time the Portuguese had started returning from Angola (a former colony) and it’s possible that the dish was something they’d eaten in Angola. 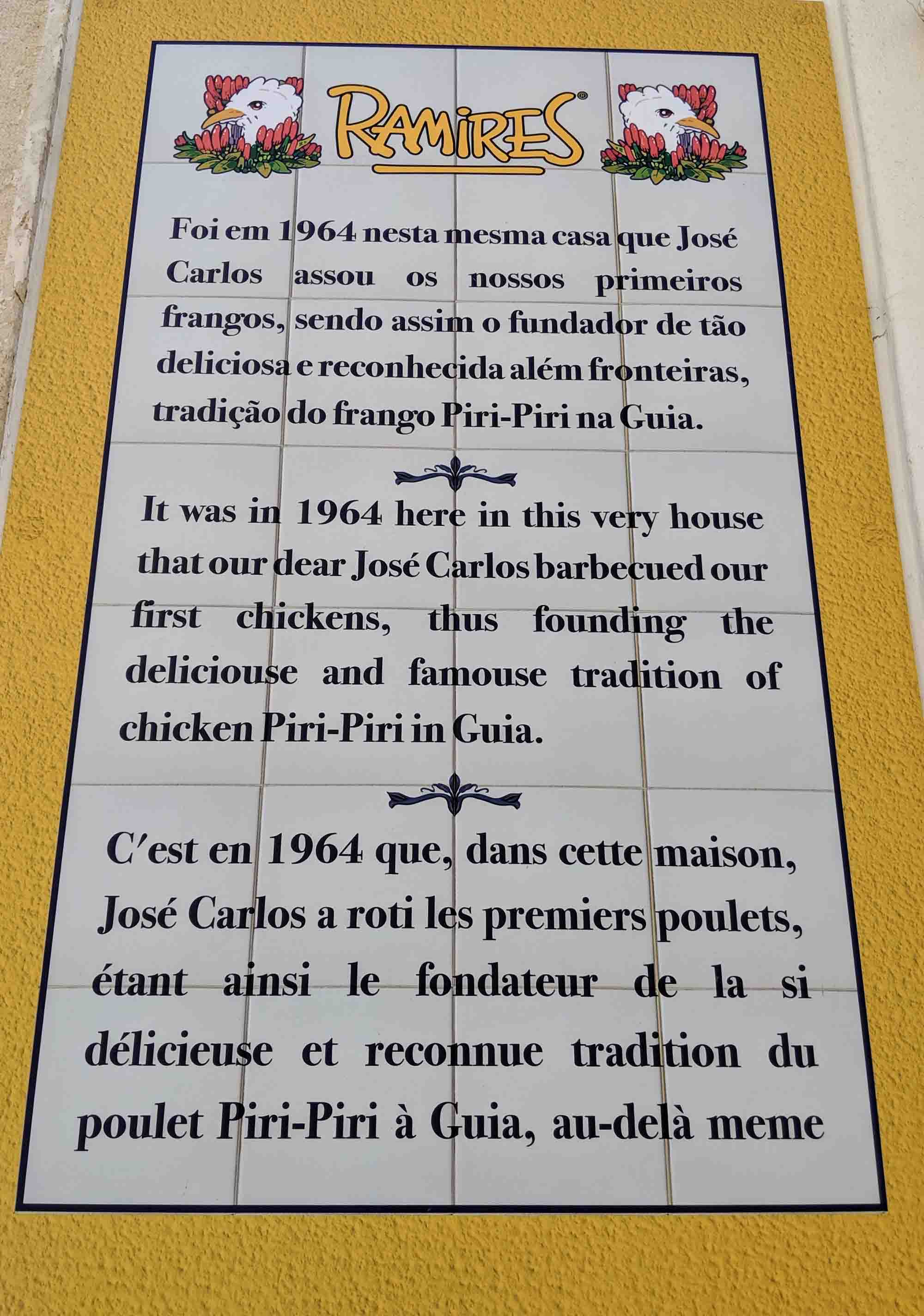 Today, just about every restaurant in Guia specialises in piri-piri chicken. Ramires is still a favourite, even if it’s partly for its legacy, but many other churrasqueiras – both in Guia and across the rest of the Algarve – have managed to win over the hearts and stomachs of locals.

If you’re visiting Guia, or even staying there, visiting at least one (or more) churrasqueiras is a must.

Guia’s other foodie claim to fame is wine, or more specifically Adega do Canto: the vineyard that Cliff Richard founded. While the vineyard is interesting because of its founder, it’s actually a well-respected Portuguese wine as well and a wine tasting session is recommended.

Visits can be booked via the Adega do Cantor vineyard website. 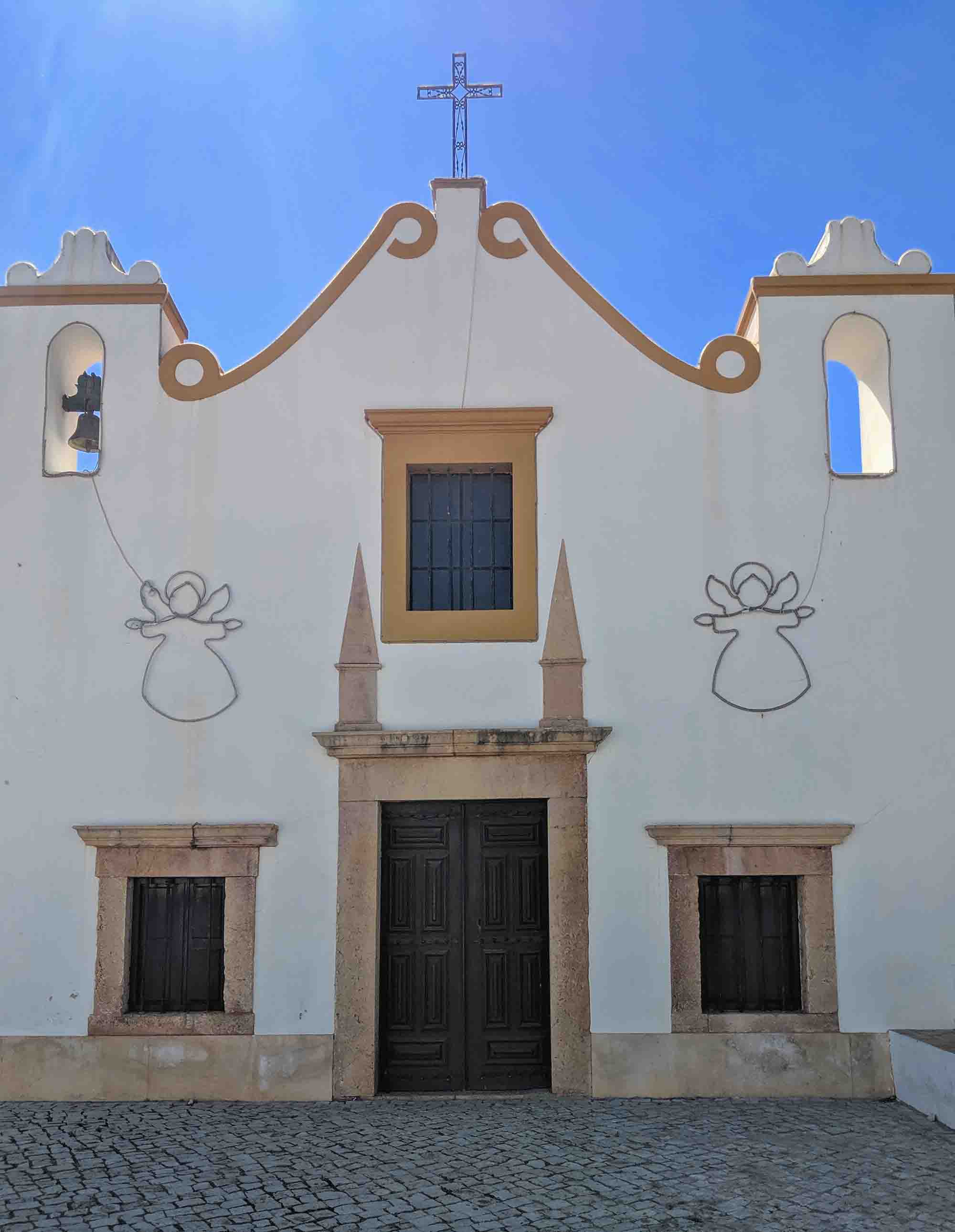 Apparition or not, this is an important historical building in Guia. Although the date of its construction is unknown, it’s believed that the original building is older than the 16th Century. The building has undergone several renovations, particularly after the 1755 which destroyed a large part of it.

It’s not the only historical church in Guia, either. There’s also the Igreja Matriz da Guia, which is pictured at the top of this page, and the very small and simple Ermida de São Sebastião. 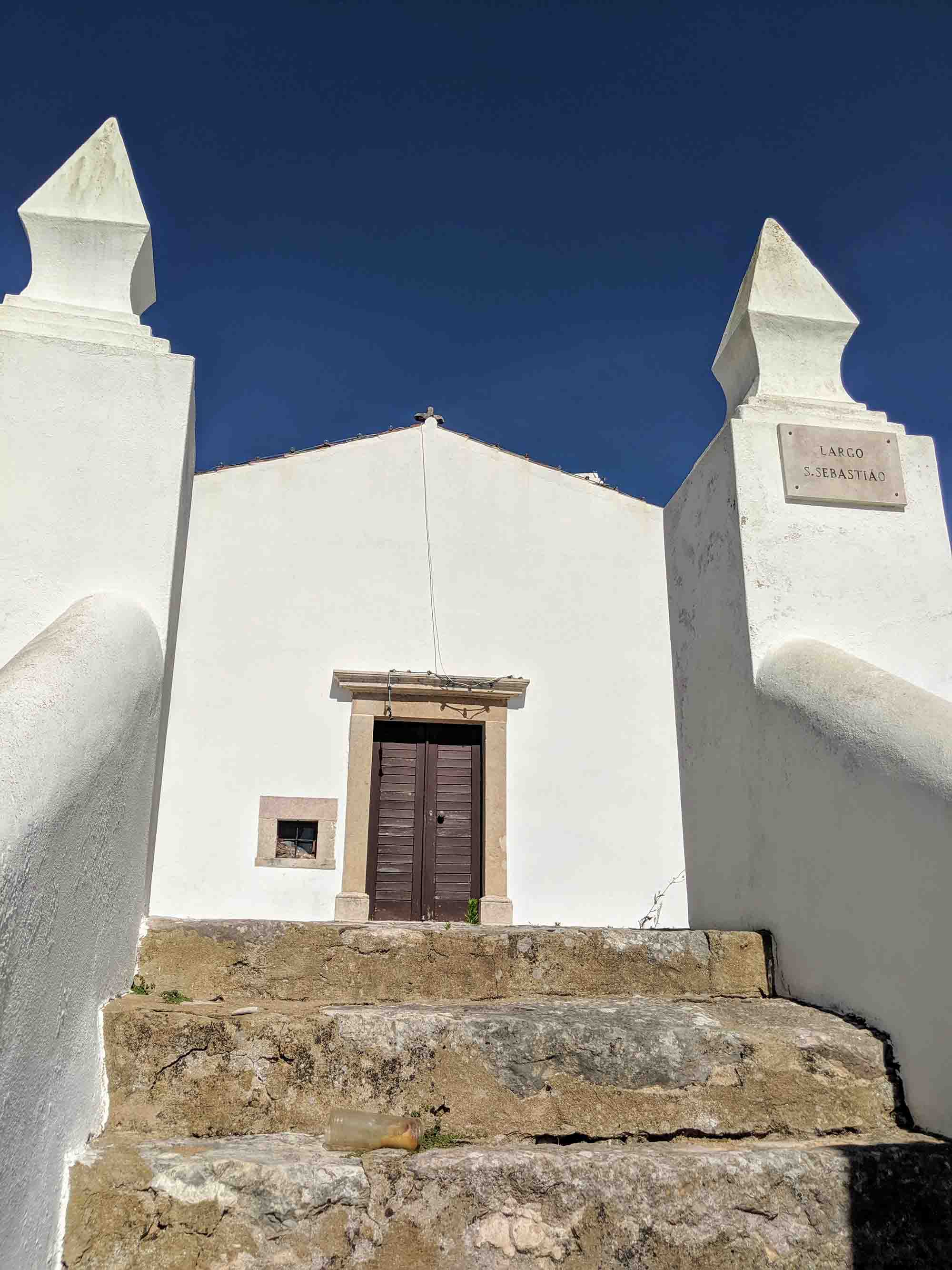 Known for its dolphin, seal, and sea lion shows, Zoomarine is one of the most popular water theme parks on the Algarve. As well as the animal shows, it also has a number of rides including a mini roller coaster and a ferris wheel.

Zoomarine is one of the most popular family attractions on the Algarve and, for those staying in Guia, is just less than 5 minutes’ drive away.

Tickets can be purchased on AlgarveFun.com.

Algarve Shopping might now be overshadowed by Mar Shopping near Faro, but it’s still a popular little shopping mall for those in the Central Algarve. You’ll find all the high street brands like H&M and Sephora here, along with a few Portuguese stores that you mightn’t have come across before.

Algarve Shopping also has a cinema, which is perfect for rainy days, as well as a British foods supermarket (Overseas Iceland) and a large Continente supermarket.

Getting to (and around) Guia

Renting a car is definitely the easiest way to get around the Algarve. Although there are bus services to and from Guia, it’ll be much easier to get to the nearby towns and beaches if you rent a car at Faro Airport.

Read the Guide to renting a car at Faro Airport.

Guia without a car

If you don’t drive, or don’t want to, it is possible to get around this part of the Algarve by public transport and taxis (although it will be more difficult).

There are several airport transfer companies at Faro Airport, including Welcome Pickups, that will take you to Guia in around 30 minutes.

Buses: Eva Bus, the local bus company, offers services to and from other towns on the Algarve like Albufeira, Faro, Lagos, and Portimão. Timetables can be found on Eva Bus’ website.

Coaches: Longer distance coaches to Lisbon and other parts of Portugal can be booked through Rede Expressos.

Trains: There is no train station in Guia. The nearest stations are Algoz, Tunes, and Albufeira-Ferreiras, of which Albufeira-Ferreiras is the largest. If you’re getting the train from Lisbon or further afield, you can get off at one of these stations and get a taxi to Guia.

There isn’t a direct bus between Faro airport and Guia. You’ll need to take the airport bus (#16) into Faro, and then take connecting transport to Guia. As there is no train station in Guia, taking the bus is normally the easier option.

Because there isn’t a train station in Guia, booking a coach through Rede Expressos makes more sense. If you do take the train, you’ll need to take a taxi from the train station to Guia.

Uber is also available in the Algarve and again, because Guia is so close to Albufeira, it won’t take too long for one to arrive.