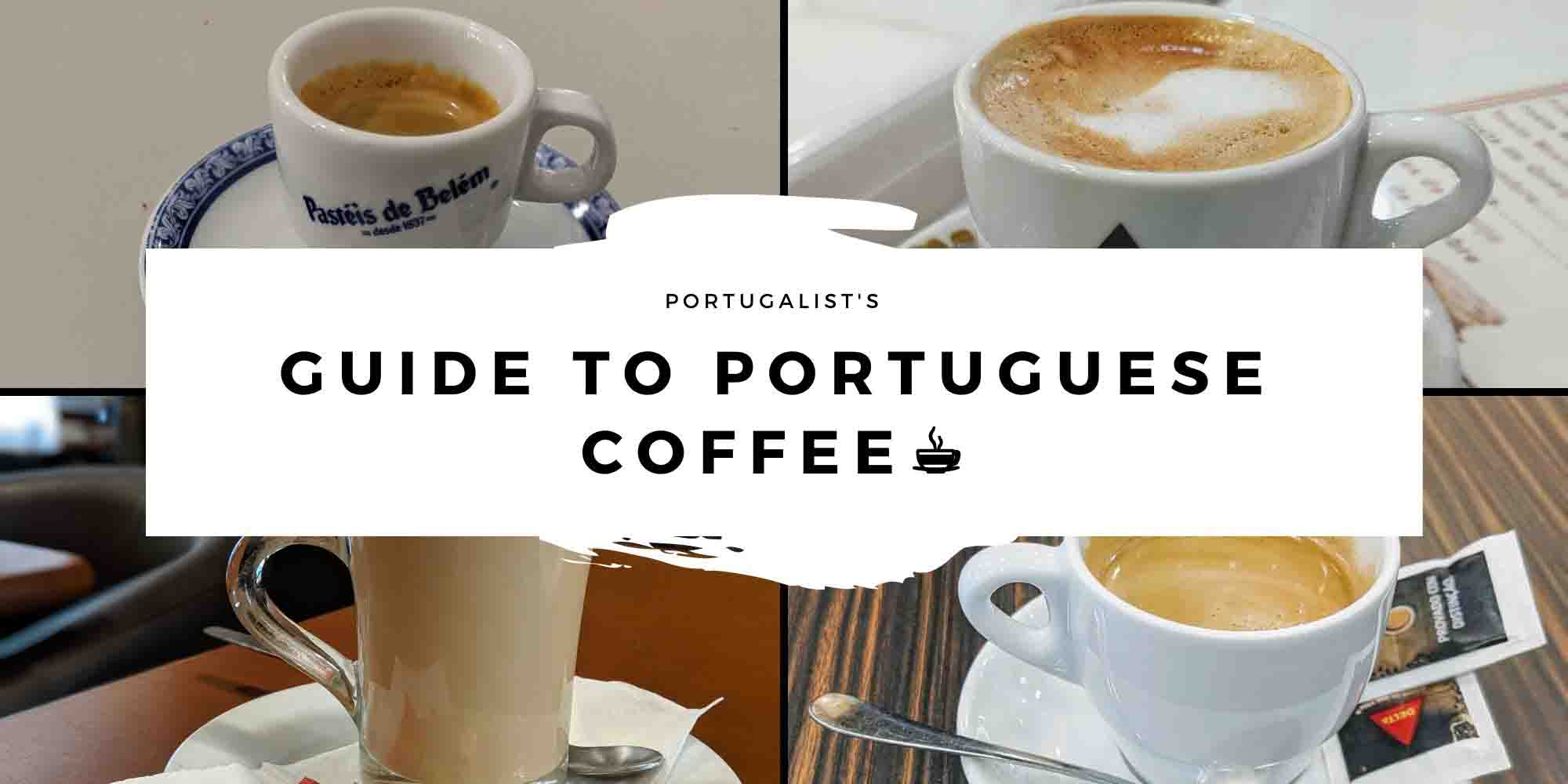 In Portugal, life revolves around coffee. Here, you never have to walk very far before you come to a pastelaria or coffee shop. The pastelaria is the heart of Portugal, and you will find at least one in every neighbourhood. Often, there will be two or three, and they will almost always have customers.

Pastelarias are different to the coffee shops you see in other parts of the world. You can not only get coffee, cakes, and savoury items here, but (often) a main meal and alcohol as well. In fact, you’ll often see older men or manual workers drinking a small beer or a glass of brandy alongside their coffee in the morning.

For a non-Portuguese person, however, the pastelaria can be a confusing place — especially when it comes to ordering coffee. Unlike coffee shops in most other countries, there’s no sign up listing all of the different coffees (well, there’s usually a pricelist but often it’s very small and hard to find). Generally, there’s no menu on the table either.

Don’t worry though: this article will guide you through the initially confusing world of Portuguese coffees.

Sidenote: Apparently BICA stands for Beba Isto Com Açucar (drink this with sugar) because when it first came to Portugal it was considered extremely bitter. You can drink your coffee without sugar, but most people add a sachet.

A café duplo is a double expresso. This is what you drink when your neighbour’s dog has been barking all night or you’re busy cramming for exams.

A “café com cheirinho” or “bica com cheiro” is a coffee with a drop of brandy or aguardente in it. You can also order the two separately, and you’ll often see older Portuguese men drinking a coffee alongside a glass of brandy.

This is a decaffeinated coffee or espresso, but you can add the word descafeinado to any of the coffees to make it a decaf. Want to get more particular about your coffee? Ask for your coffee in a chávena quente (hot cup).

Milky coffees are typical in the morning in Portugal and you’ll see many people order a meia de leite or a galão. The milk that’s typically used is a full-fat long-life milk (UHT). Although some places may have skimmed milk, there isn’t really a selection of milks. You won’t have the option of ordering half-and-half or heavier milks, for example. As for plant-based milks like soy and almond milk, it’s likely these will become more common in the coming years, but you won’t find them in most traditional pastelarias for now. If you want a milky plant-based milk, look out for a more modern coffee shop where the menu has things like lattes and flat whites rather than meia de leites and galões.

This is half milk and half coffee, and it’s similar to a flat white or a latte. If you want it stronger, you ask for “uma meia de leite escura“. Recently, places have started experimenting with latte art, although that’s a fairly new thing.

If you want a stronger coffee, particularly first thing in the morning, you can ask for a galão directo aka a proper shot of espresso in your galão. On the other hand, if you aren’t a big coffee drinker, you could ask for a “galão clarinho“, which is an even milkier version of the galão.

“Um abatanado” (in the South) or “um Americano” (around Porto) is somewhere between an espresso and an Americano. If you want a long black coffee, this is the closest thing that you can get to it. Even then, it isn’t always as big a coffee as a lot of people will like.

Getting a big cup of coffee similar to an Americano is quite difficult and, even if you ask for an abatanado, often they’ll only put a tiny bit more water in it. It’s rare that they’ll fill it to the top of the glass.

If you want to guarantee you cup is full ask for an “abatanado cheio“, which means a full abatanado or a black coffee with extra hot water.

Chá is tea, and normally if you say tea that means black tea (chá preto). If you want tea with milk, you could ask for “chá preto com leite“. Some places will automatically just bring milk to foreigners. Other teas you could ask for are chá camomila (chamomile tea), chá tilia (tilia tea), and a chá de frutos vermelhos (red fruits tea).

Now, that’s a whole other question. The easiest thing to order, especially if you’re visiting Portugal for the first time, is a pastel de nata (or what many people call a Portuguese custard tart).

This isn’t Portugal’s only pastry—be sure to read the list of all the other cakes you should try—but it’s a good place to start. Many pastelarias also serve a main meal at around lunchtime, which is almost always something traditional and usually very affordable as well. If you’re looking to try some traditional Portuguese dishes, the café is a good place to go.

If you want to ‘order coffee like a local’ order an espresso. Normally this is called a café, but in Lisbon it’s also called “uma bica” and in Porto it’s called “um cimbalino“. If that’s a bit confusing, just ask for “um café”.