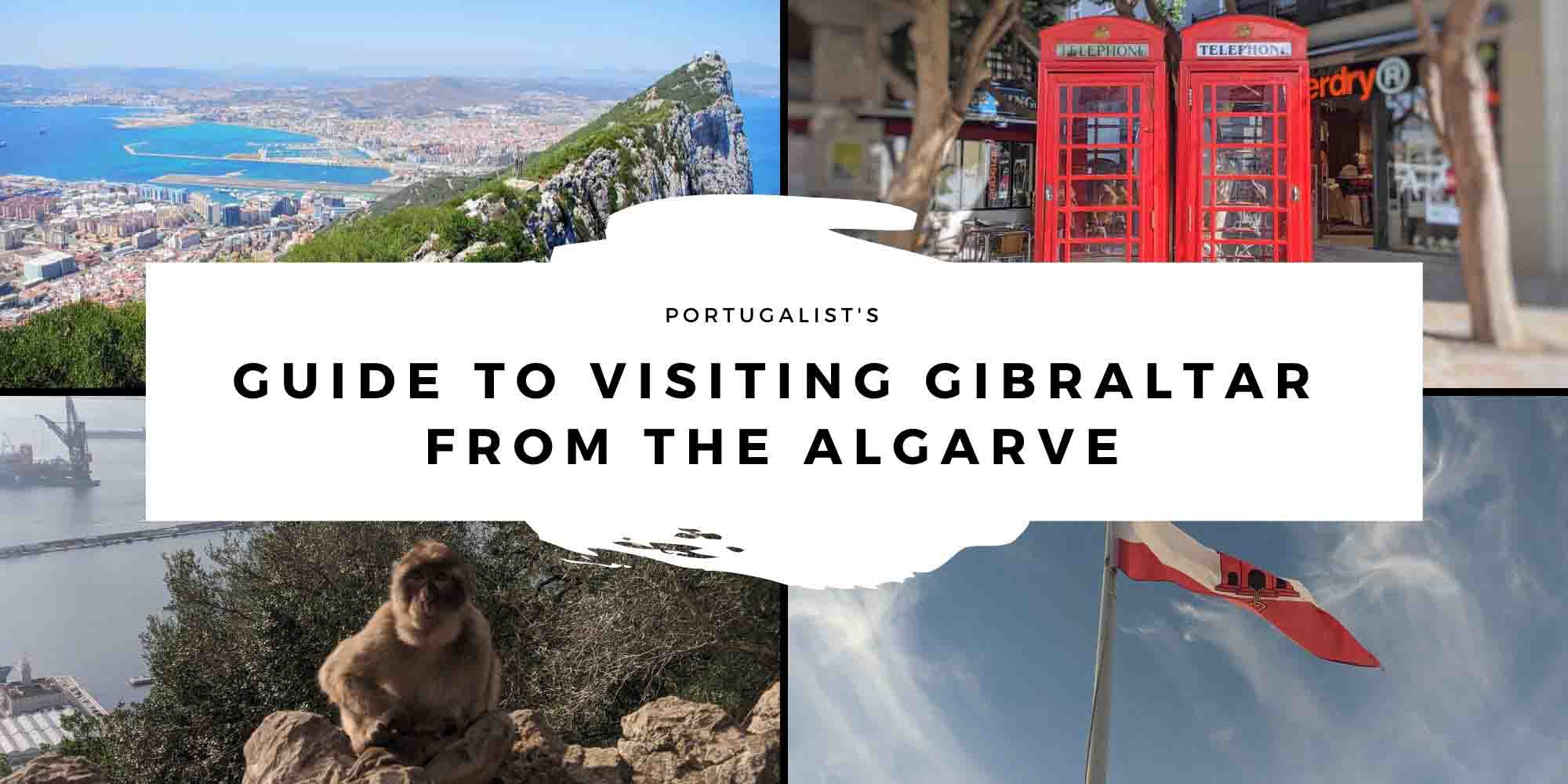 I’ve always been curious to see what Gibraltar is like, having heard of mixture of good and bad things about if.

Recently, I decided to make the trip from the Algarve to Gibraltar to see the famous rock for myself. This article explains how you can do the same.

The Algarve is just a few hours from both Seville and Gibraltar and many people visiting the Algarve often decide to tag one or two of these destinations onto their trip.

It has an interesting history, and being an English-speaking and British-owned town on the Iberian peninsula makes it interesting and unique. And, of course, there are the monkeys as well (well, Barbary macaques specifically).

How to get from the Algarve to Gibraltar

There are several ways to get from the Algarve to Gibraltar but the easiest, fastest, and maybe even cheapest way to get there is by car.

While it’s possible to do it by public transport, the journey takes almost an entire day which means you actually need to allocate 2-3 days for the trip (1 to get there, 1 to get back, and 1 to see Gibraltar). With a car, it’s just about possible to go to Gibraltar and back from the Algarve in one day.

If you haven’t already rented a car for your trip to the Algarve, you can easily rent one using rentalcars.com.

More than likely you’ll find the most options at Faro Airport, but you don’t have to go all the way to Faro Airport to rent a car: most of the popular towns on the Algarve will have at least one car hire company.

It’s important to mention that some car rental companies charge an extra fee for driving in Spain, which can be as much as €100. Be sure to rent with one of the following companies that don’t.

To get from the algarve to Gibraltar by public transport, you’ll need to :

Note: It isn’t really possible to get to Gibraltar by train. There isn’t a train between the Algarve and Seville for starters, and from Seville the train only goes as far as San Roque-La Línea – around 12.5 km from La Línea.

The Algarve to Seville Bus

The Algarve bus to Seville starts in Lagos and normally stops in Portimão, Albufeira, Faro, Faro Airport, Tavira, and Huelva. The journey takes approximately 4 hours and 45 minutes. Tickets can be purchased online from rede-expressos.pt.

Note: There are several bus stations in Seville, and the Algarve bus goes to two of them: Plaza de Armas and Santa Justa. Neither of these two stations are where the bus to La Línea starts from (that’s Prado de San Sebastian), and both are roughly the same distance from each other (30 minutes’ walk).

Just in case there are any delays or you get lost, you should make sure you have at least an hour between the two buses.

The Seville to La Línea Bus

The bus from Seville to La Línea de Lá Conception starts at Prado de San Sebastian and there are usually several trips per day. The journey takes roughly 4 hours and 5 minutes. Tickets can be purchased online from Costa Sur.

One way to do Gibraltar in one day without a car is to take a coach trip which can be booked through Get Your Guide. The bus leaves from Faro, but you can arrange pickup from hotels in nearby towns including Vilamoura, Quarteira, and Monte Gordo.

This is quite a lot of bus travel for one day, and it normally only means 4 hours in Gibraltar. Hiring a car would probably be a better day trip option for most people, although this is helpful for anyone that can’t drive.

Alternatively, there’s another guided tour that leaves from Seville. You would need to head over to Seville the day before so you’re there to be picked up the next morning.

Is Gibraltar a day trip or is it an overnight?

It’s possible to see Gibraltar as part of a day trip if you:

It’s not really possible on public transport. The minimum you could do it via buses is two days, but that would only give you a few hours in Gibraltar. Realistically, you’re actually looking at a minimum of a 3-day trip if you go by bus: 1 day to get there, 1 day in Gibraltar, and 1 day to get back.

Personally, the only way I’d consider visiting Gibraltar as a day trip would be if I rented a car. Of course, that’s still quite a lot of driving for one day. It’s definitely a lot more enjoyable if you split it up with an overnight stay.

Because La Línea and Gibraltar are just a few minutes walk from each other, and the border is open 24 hours per day, you have the option of staying in either.

Hotels are much cheaper in La Línea than they are in Gibraltar – 3-4 times cheaper – but hotels in Gibraltar are more luxurious. It depends what you’re looking for: La Línea for budget accommodation or Gibraltar for something more special.

Here are a few handpicked hotels in Gibraltar to consider:

Here are a few handpicked hotels in La Línea to consider:

I stayed in the budget “Room in a shared apartment” in La Línea, which was basic but fine for a night or two.

Note: if you intend to stop in Seville overnight as well, especially on a weekend, book in advance. Seville hotels can be expensive at the weekend.

Finishing your trip in Gibraltar

Rather than come back to the Algarve, it may make sense to finish your trip in Spain and get a flight home from either Seville or Málaga airport. If you’re going by public transport anyway – if you’re driving, you need to bring the car back to the rental location in the Algarve or pay a 1-way drop off fee.

What to see & do in Gibraltar

Gibraltar is a unique place. Although it’s located in the south of Spain, the town itself looks and feels like a British town.

There are red post boxes and phone boxes, shops like Debenhams and Marks & Spencers on the high street, and pubs serving dishes like fish and chips, bangers and mash, and Cornish pasties. It’s simply bizarre.

“The Rock” is where most of Gibraltars historical attractions as well as the monkeys can be found. Most of the attractions are a part of the “Nature Reserve,” which you need to pay to enter.

I took the basic ticket, which was €5, and allowed me to walk around the rock, see a few of the attractions, and see the monkeys. There are more expensive tickets that give you access to more of the attractions, but I didn’t have enough time to see everything.

While you can walk up to the “Nature Reserve” it’s quite a steep climb and, unless you’re a keen walker, it probably makes more sense to get up there another way.

Other ways you can get up there include:

Note: If you walk up or go by cable car, there’s a lot of walking between attractions once you get to the Nature Reserve. If you don’t want to walk much, it’s better to take a sightseeing bus.

In fact, if your priority is seeing as many attractions as possible, it’s best to take a sightseeing bus. The attractions are very spread out and, unless you dedicate a full day, you won’t be able to see everything.

Some of the things that you should see include:

Go shopping on the high street

For those visiting from the UK, the shopping in Gibraltar won’t be particularly interesting (apart from the discounted booze and cigarettes). Those who are visiting from other countries, especially expats visiting from Spain or Portugal, will probably be very excited to shop at the various UK high street shops that Gibraltar has.

Obviously, given that the language and currency change once you cross over from Spain into Portugal, so does the food as well.

There are countless places selling fish and chips, as well as others selling other traditional foods like bangers & mash, steak and ale pies, shepherd’s pie, and full English breakfasts.

The following are a few FAQs about Gibraltar.

What language is spoken in Gibraltar?

English. Most of the staff in the shops and restaurants are Spanish, but will speak to you in English.

What is the currency of Gibraltar?

The Gibraltar Pound. Normal British Pounds are accepted, and you can use your Gibraltar Pounds in the rest of the UK but you may have some difficulty doing this as people won’t be familiar with them.

Do I need to show my passport to go in and out of Gibraltar?

Yes, you do. They barely glance at it, but you do need to be able to wave it at them.

What hours is the border open?

The border is open 24 hours per day.