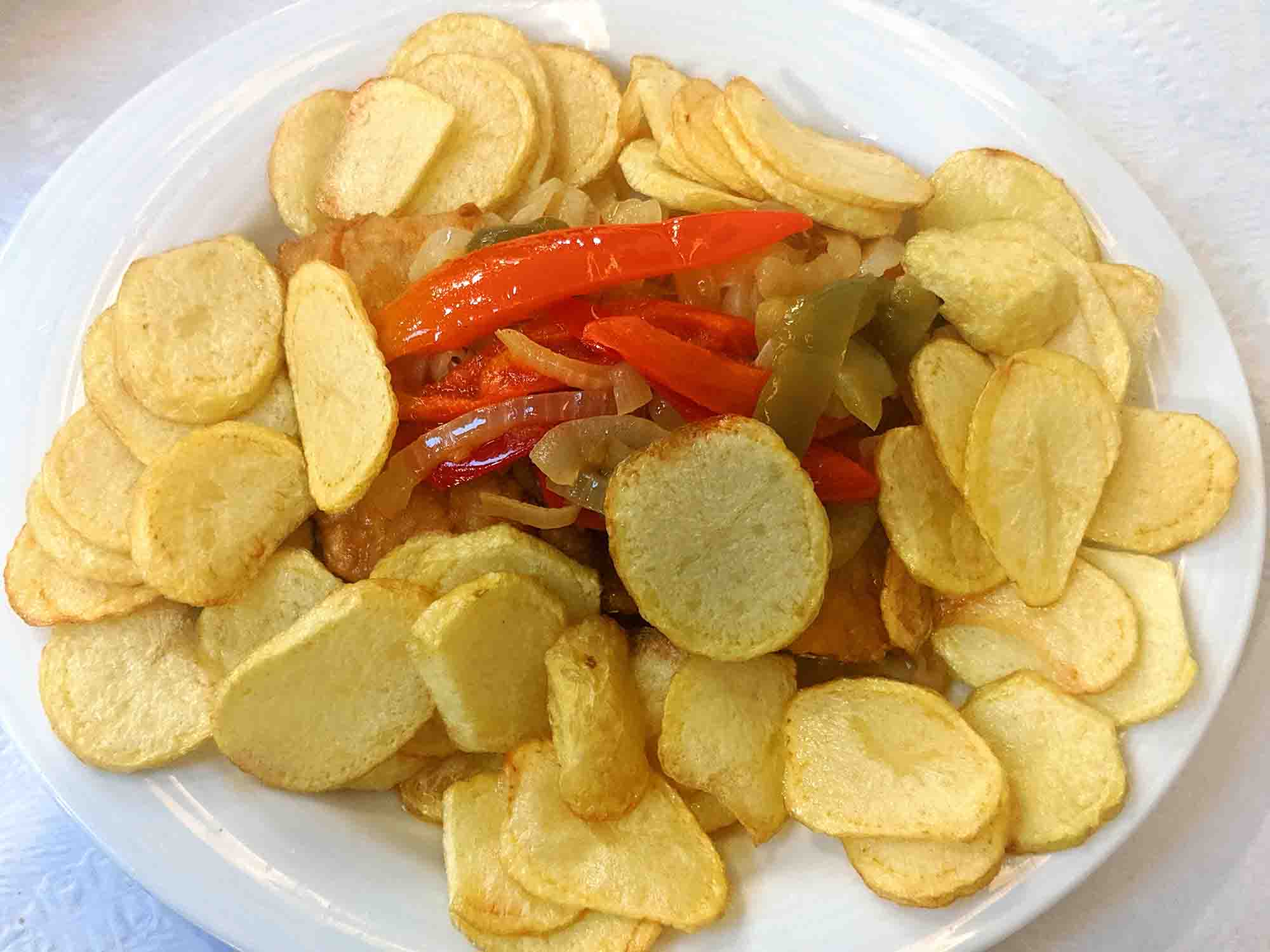 From Bom Jesus do Monte to Braga Cathedral, there’s plenty to see and do in Braga. But for foodies, a more important question is: what’s there to eat? The following are five of the most popular regional dishes that you should try in Braga.

Bacalhau à Braga (sometimes it’s also called Bacalhau à Minhota after the surrounding Minho region) is one of the best and most popular recipes that you’ll find in Portugal. While you can find it fairly easily in other parts of the country, it’s worth trying it here in Braga where it’s on just about every restaurant menu.

The recipe combines bacalhau with sliced potatoes, onions, roast peppers, and generous helpings of olive oil to make a dish that is hearty and tasty.

Portugal has a lot of desserts and one of the best ones, Pudim à Abade de Priscos, comes from Braga. It’s very sweet, it’s very sticky, but it’s also very delicious. The best way to try this is with a cup of black coffee, either a café (an espresso) or an abatanado (similar to an Americano) to wash it down.

Fidalguinhos may just be another biscuit, but they’re a very tasty biscuit all the same. No doubt you’ll stop for a coffee at some point while you’re exploring Braga and, when you do, be sure to order a few of these little gems.

Like most sweet things in Portugal, the recipe for Fidalguinhos comes from the local convent – in this case: The Convento de Nossa Senhora dos Remédios de Braga.

The biscuits, which have a slight cinnamon and lemony flavour, aren’t just meant to be tasty but also satirical as well. They’re designed to look like crossed legs, which apparently represents the people born into money who didn’t have to work hard to do anything.

Tibias are one of Braga’s regional sweets, but it can actually be hard to find a pastelaria that sells them, although Tibias de Braga on Av. São Miguel O Anjo is a good place to look. They’re named after the tibia bone, which they’re designed to look like.

Porto isn’t the only city famous for francesinhas: Braga is too. And, for the people of Braga, the francesinhas from Braga are better.

If you haven’t had a chance to try a francesinha from Porto, or you fell in love with them and want to try more, Braga is another city in which to do it.

Braga has a very unique Christmas tradition, something which you should observe if you’re visiting the city on Christmas Eve. Every year, on December 24th, people from all over Braga come to Casa das Bananas to eat bananas, drink muscatel, and wish each other a Merry Christmas.

The tradition, known as the “Bananeiro” takes place on 26, Rua do Souto. The tradition started when the owner of a banana shop decided to setup a small stall outside his shop selling glasses of Moscatel. When a customer asked him if he had anything he could eat, he gave him a banana.

When the owner’s son heard about this, he started bringing his friends to the shop for a banana and a moscatel. Somehow or other, word got out, other people started coming, and, before long, Bananeiro had become a Christmas tradition.

Nowadays, so many people come to Rua do Souto that the street is packed. It has become one of the highlights of the year, however, with everyone in good spirits, wishing each other a Merry Christmas.