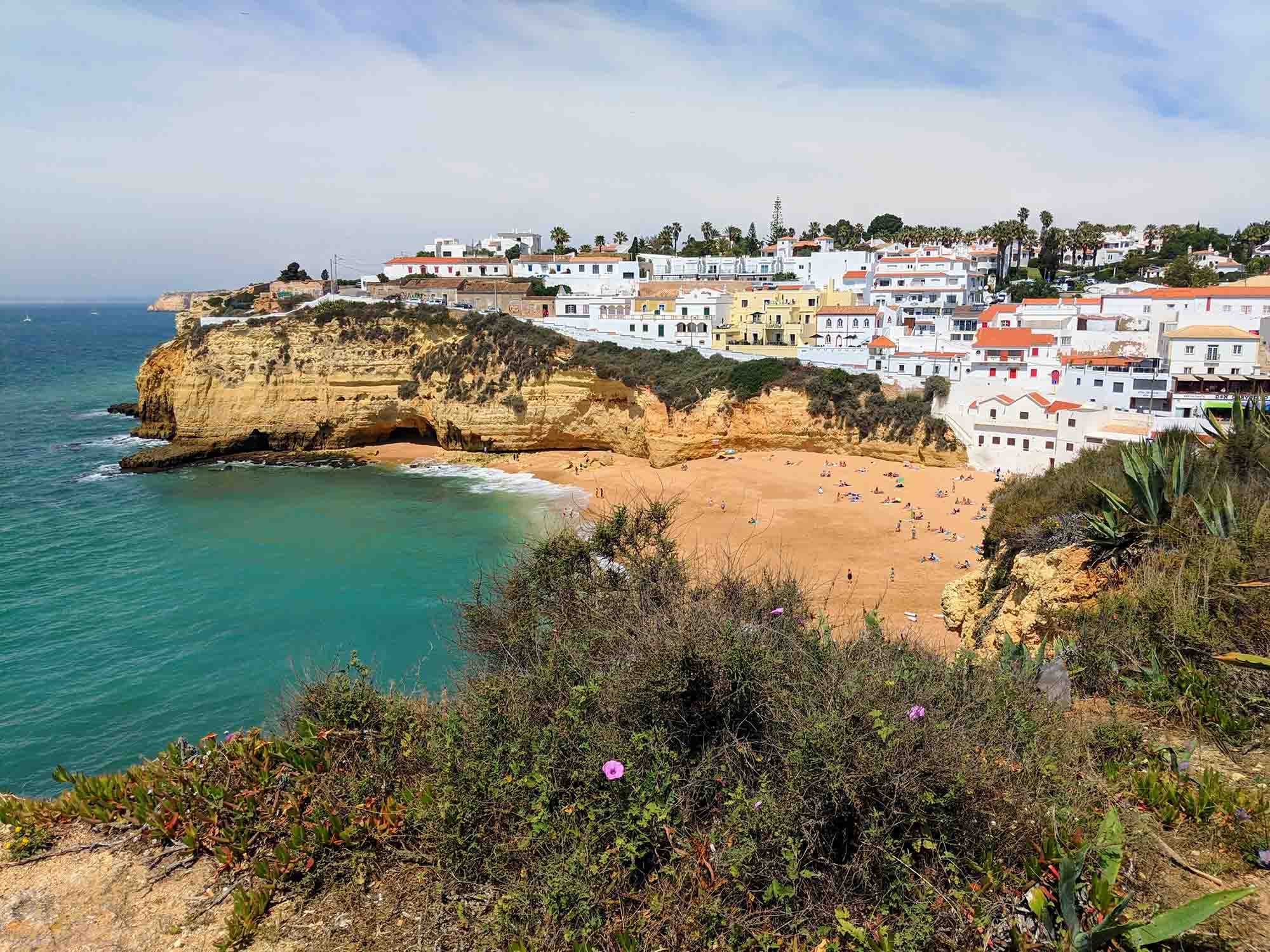 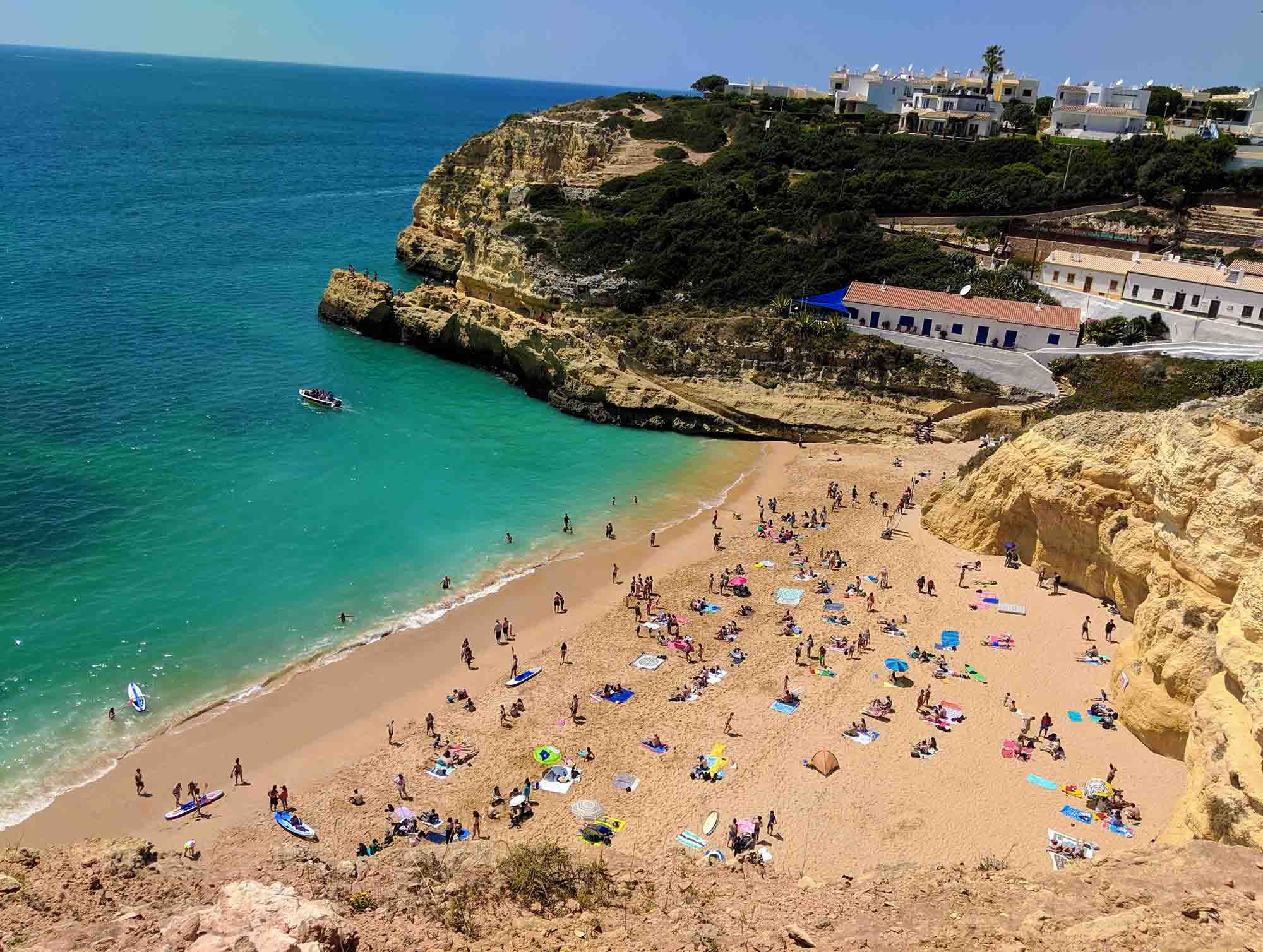 There are also quite a few interesting inland towns like Loulé and Silves, both of which have plenty of interesting historical attractions including castles, Silves Castle and Loulé Castle. As well as places to see, there’s also plenty to do as well like take a boat tour or kayaking tour to the Benagil caves, visit water parks like Slide & Splash and Aqualand, or buy local souvenirs at Porches Pottery near Porches.

Faro, the capital of the Algarve, is also considered to be in the Central Algarve (although only just). It has many interesting historical attractions, including a Capela dos Ossos (chapel made from bones), and is a very popular day trip destination.

The Central Algarve is ideal for those that want to be able to explore the whole of the Algarve from one place: you can get to both Sagres on the far end of the Western Algarve or Vila Real de Santo António on the Portuguese-Spanish border in the Eastern Algarve in an hour on the A22 toll road.

Towns & cities on the Central Algarve

Getting to (and around) the Central Algarve

It’s always an asset to have a car in the Algarve, and renting a car at Faro Airport is always recommended. It’s a rural place for the most part, so bus and train services are limited. Of course, you may not need one if you’re mainly going to lie on the beach and, if you don’t drive or really don’t want to rent a car, it’s possible to get around the Algarve without one (just a little more time-consuming).

The Central Algarve is not very well-connected by train. It does stop at Faro, Loulé*, Albufeira*, Silves*, and Ferragudo*, but all the stations marked * indicate that the train station is not in the town centre. For most of them, you’ll need to get a taxi from the train station into the centre. Train tickets and timetables can be found on cp.pt and discounts are available if you book in advance.

There also isn’t a train station at Faro Airport: if you want to get around by train, you’ll need to take the airport bus (#16) or a taxi into Faro first.

Buses connect most towns on the Central Algarve, although it can often be difficult to find information about bus timetables and routes.

EVA Transportes is the main bus company here, and you can find most town-to-town routes by going to EVA’s website and seeing what routes are available. Algarvebus.info also posts all of the Algarve timetables.

If you’re coming from further than Faro Airport, for example from Lisbon or Porto, you’ll need to book a long distance coach. These go to most towns on the Central Algarve, and can be booked through rede-expressos.pt.

With the exception of Albufeira, there usually isn’t a direct bus between Faro Airport and any of the towns on the Central Algarve. If you want to get there by bus, you’ll need to take the airport bus (#16) or a taxi from the airport into Faro. From Faro, you’ll be able to get to most major towns on the Algarve by bus.

Alternatively, you could take a shuttle bus from Faro Airport (see below).

Shuttle bus services connect Faro Airport with most towns on the Central Algarve and, although expensive than taking public transport, it’s usually a faster and more convenient way of getting to your accommodation. Tickets are available from hoppa.com.

Shuttle buses only really connect the airport and towns and not towns to each other. If you want to get around the Algarve, you’ll need to use either taxis (see below) or public transport (see above).

By Taxi (and Uber)

Taxis are available in most Algarve towns as well as at Faro Airport and are very affordable. There’s normally a taxi rank in the centre of the town or, alternatively, you could phone Taxi Arade on 00-351-282460610.

Note: Unless you’re going into Faro, it’s usually cheaper to book an airport transfer at Faro Airport than to get a taxi when you arrive.

Taxi apps like Uber are becoming more and more common in the Algarve, especially around large Central Algarve towns like Albufeira and Armação de Pêra.