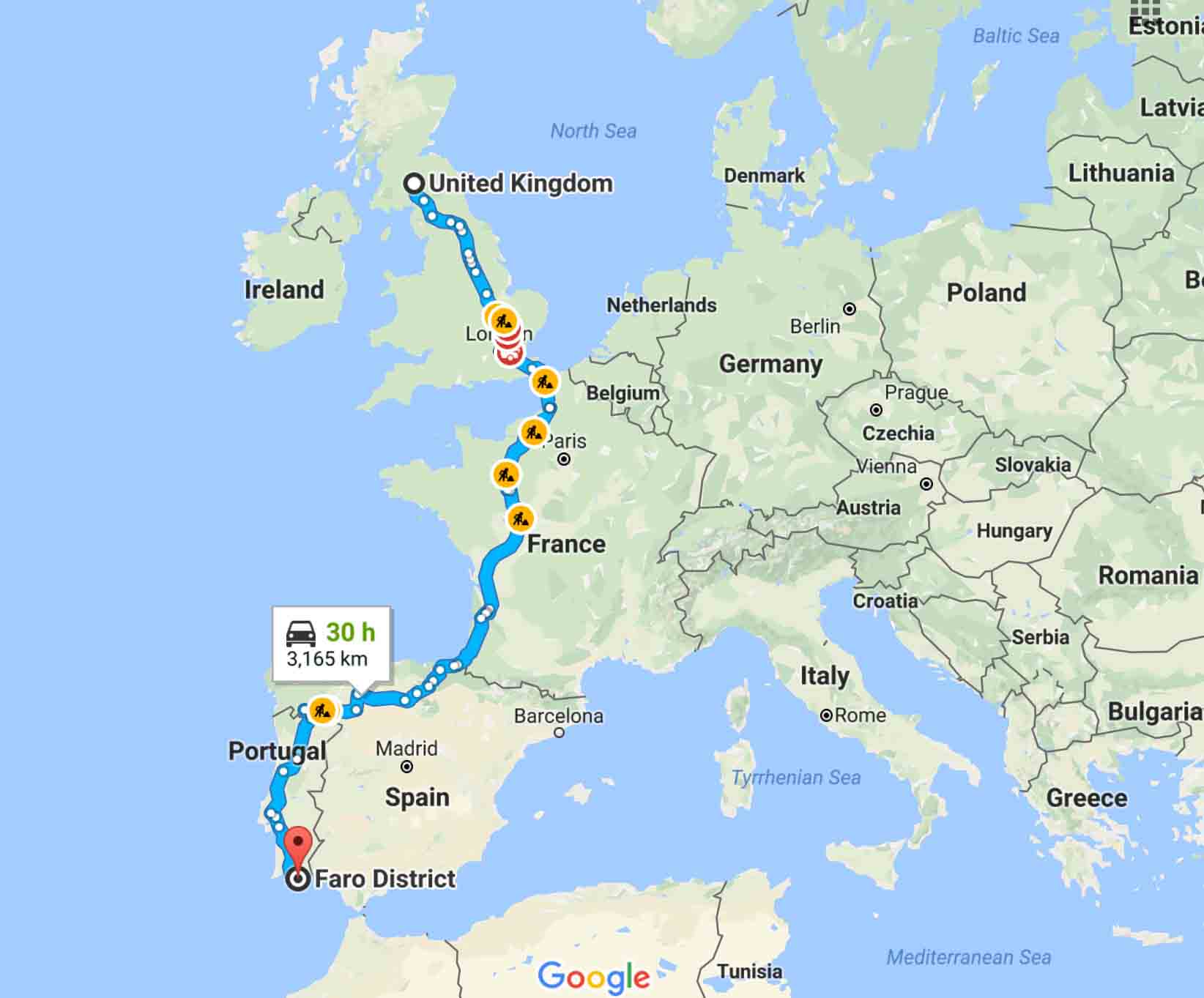 Every year, thousands of people drive from the UK to Portugal and back again.

It’s usually cheaper to fly (although that depends on how many are in your group), but there are also a lot of benefits to driving to Portugal.

You save money on car hire, you can bring a lot of your possessions over, and it’s also a good way to bring the dog (or the cat) to Portugal. These benefits are even more useful to expats or to anyone who’s planning to spend several months living in Portugal.

Unfortunately, there isn’t a direct ferry between the UK and Portugal. In fact, there are no ferries to Portugal from any other country (unless you count some of the river boats that connect Spain and Portugal like the one that connects Ayamonte in Spain and Vila Real de Santo António in Portugal).

You can either A) drive through France or B) take a ferry to the North of Spain and drive from there. There are pros and cons to both but, for most people, it normally comes down to a question of time and money.

Which option is cheaper?

A ferry ticket (for two people and a car) from the UK to Spain can cost around £400 one-way or around £800 for a return trip (see aferry.com for the latest prices). Occasionally there are deals, but £400 each way is definitely not unusual.

Meanwhile, a ferry between the UK and France might cost around £120 for a return (again, see aferry for up-to-date prices).

That’s £680 of a difference! Obviously, you need to factor in the cost of driving across France and perhaps at least one overnight, but, even still, it’s not going to come to £680.

So, how much should you expect to pay driving across France?

As an estimate, we looked at how much it would cost to drive from Calais in the very north of France to Saint-Jean-de-Luz right next to the Spanish border.

Autoroutes estimated €94.9 for the péage (tolls) and €104.2 for fuel at the time of writing. A quick look at booking.com suggests that there are plenty of accommodation options for around €50 if you stop off at a small town on route.

Note: you can also avoid the péage roads if you want to avoid the toll costs, however it’ll take you slightly longer: 13 hours and 30 minutes vs around 10 hours 42 minutes. You’ll spend slightly more on fuel, but will save on toll costs.

Which option is faster?

So, if driving through France is the cheaper option, which option is faster? We took a look at both.

According to Google, driving from Calais to Albufeira takes around 21 hours and 38 minutes. You’ll need to add on the ferry time or tunnel time and any driving time within the UK. As an example, the Dover to Calais ferry takes around 90 minutes.

Take a UK to Spain Ferry

So driving through France, surprisingly, is the faster option although it doesn’t take into account any overnight stopovers. A lot of people take two overnights.

Both options also assume you’ll be driving non-stop, which obviously won’t be the case. You’ll have to stop off a few times and driving through France means you’ll stop off more times. If it’s just one person driving, it’s a good idea to take longer breaks.

These stop-offs really add up, particularly if you stop for food, and it’s very likely that the driving through France option could take longer.

How to plan your trip

Hopefully, the information above will have helped you decide which is the better route for you.

Below you’ll find a little “todo list” for both options.

Driving through France in 4 Steps

Decide which ferry route you want to take

There are lots of different ferry routes between the UK and France. Dover to Calais is the most popular ferry route, particularly from those living in London, but it doesn’t make sense if you’re living on the other side of the country.

There are ferry ports all across the South of England, in places like Plymouth, Poole, and Portsmouth, so take a look at those nearest to you. You can see a list of ferry routes here.

Aferry.co.uk is also great for the journey times and prices between routes.

Book your ferry (or Eurotunnel) tickets

Once you’ve decided your route, book your tickets. Prices rarely go down, but often go up.

Decide your route through France

The easiest way to do this is simply to put your arrival ferry port and your final destination in Portugal into Google Maps and let Google do the planning for you.

If you’re planning to avoid the toll roads, you can do this by clicking “options.”

Decide how many stopovers you want

Pick a town, and then have a look on booking.com to see what comes up.

Taking the ferry to Spain: Steps

Decide which ferry route you want to take

You can view a list of ferry routes here. It’s also worth having a quick look at aferry as sometimes it’s good at highlighting a cheaper route.

Once you’ve decided your route, book your tickets.

Plan your route from Spain to Portugal

Often the easiest thing is to let Google decide: put your arrival ferry port in Spain and your final destination in Portugal into Google Maps to see what it suggests.

Google will probably suggest doing most of your driving in Spain rather than Portugal. This is mainly because Portugal has toll roads and Spain doesn’t.

So, driving in Spain is the cheaper (and often faster) option, however, if you’re interested in seeing more of Portugal, consider driving through here instead. One possible route is Portugal’s “Route 66” which starts in Chaves in the north and goes down to Faro in the south.

Decide if you’ll have a stopover

Even though you can do the drive in one go, it’s much more pleasant to have an overnight. Salamanca is a popular stopping off point for those driving through Spain.

If you’re travelling with pets, there are a few extra things to think about.

Some ferries have pet-friendly cabins while others have kennels where the dogs stay for the duration of the trip. In the Eurotunnel, the dog stays in the car with you and, in some ferries, pets stay in the car.

Some people don’t like the idea of their pet being left in the car or even in a kennel so, it’s important to find the right option for you.

See our guide to pet-friendly ferry cabins and kennels.

Travelling with a pet, particularly a dog, means that you’ll have to break up the journey a lot more for toilet and walk breaks.

And, don’t forget that your pet will need to be vaccinated and micro chipped (see the full list of rules). There are also Brexit-specific guidelines here.

Tips & rules for driving in Portugal

It’s a good idea to read up on the different rules for driving in Portugal, things that you should have in your car, and tips for staying safe and making the most of your time here.

Most UK insurers cover European trips abroad, but most also have limits on the amount of time that you’re allowed to be outside of the country. 90 days is not uncommon, but neither also is 30.

For most people on an annual holiday, this won’t be a big deal but if could be an issue if you’re planning on spending a few months in Portugal.

If that sounds like you be sure to read Portugalist’s guides to long term car insurance and breakdown cover for UK drivers.

Can I drive to Portugal from the UK?

Yes, you can drive to Portugal from the UK. You can either take the ferry or Eurotunnel and drive through France or you can take a ferry to Northern Spain.

Is there a ferry between the UK and Portugal?

Which is better, driving through France or taking the ferry to Spain?

We estimate that driving through France is likely to be cheaper, but that taking the ferry to Spain is going to be the faster option.

86 thoughts on “How to Drive to Portugal from the UK”