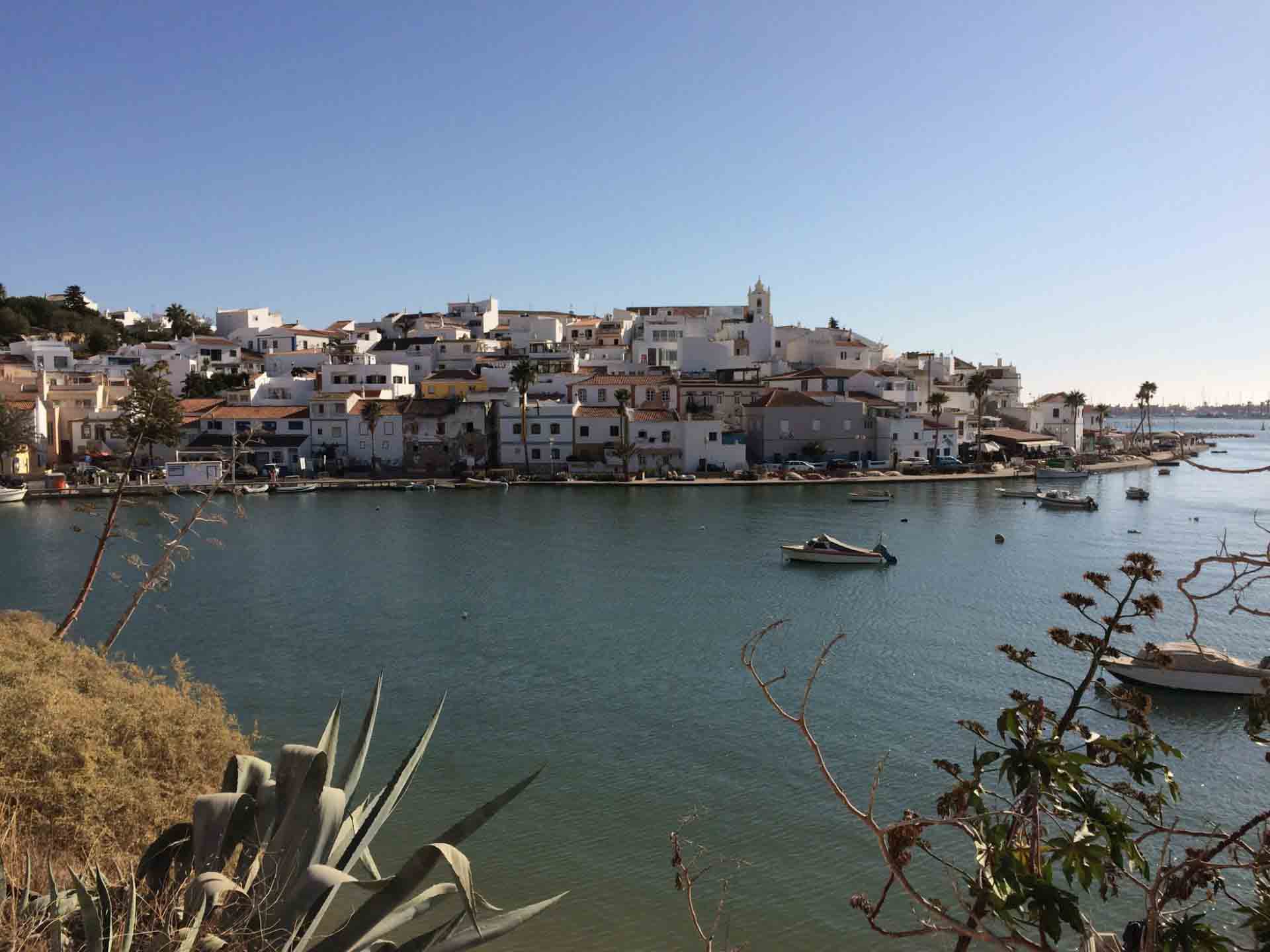 Once a quiet fishing village, the quaint little town of Ferragudo is characterised by fishermen’s cottages, whitewashed buildings, and narrow cobbled streets. It’s one of the prettiest towns on the Algarve and, although the town’s focus is now tourism rather than fishing, Ferragudo has been fairly unaffected by the worst parts of tourism: you won’t find any neon or high-rise hotels here.

Life congregates around the town square, Praça Rainha Dona Leonor, which is surrounded by cafés, restaurants, and an ice-cream parlour. There’s always a friendly and relaxed vibe here as holidaymakers dine in the square’s restaurants, local residents sit and chat on the benches surrounding the square, and children play together in the middle of it all.

Fishing is still a big part of Ferragudo’s culture and is constantly happening in the background. Walk down to the harbour and you can watch the fishermen as they moor up with that day’s catch. Living here allows you to do as the chefs and restaurants owners do and buy directly from them.

As Ferragudo is quite small, you don’t have to pay a huge amount of attention to where you live, particularly if you have a car. If you don’t have a car, you’ll need to prioritise between living near the beach and living closer to the nearby town of Parchal, where you have amenities like the train station and Lidl supermarket.

Unfortunately, you don’t always get a lot of choice. It can be hard to find houses and apartments for rent, as most properties here are for short rather than long-term rent. Idealista.pt is a good place to begin your property search.

While there are several small supermarkets in Ferragudo, most people travel to the Lidl in nearby Parchal to do their shopping. Cross the bridge into Portimão and you’ll find even more options, including Lidl, Continente, and Auchan (formerly Jumbo). Auchan is situated in the Aqua Shopping Centre, one of the main shopping centres on the Algarve. Here you’ll find shops like Berksha, H&M, Pull & Bear, and Primark.

Ferragudo is conveniently located around 15 minutes drive from Hospital de Portimão, one of the largest public hospitals in the Algarve. Private hospital, Hospital Particular do Algarve, in Alvor is situated around 20 minutes drive away.

Public transport connections aren’t great in Ferragudo town centre, but there are good connections nearby at Parchal (rail) and Portimão (rail and bus). Having a car will make getting around easier. Train tickets and timetables can be found on cp.pt.

The train doesn’t come into Ferragudo town centre, but stops at Parchal. At around 2.3 km from the town centre, this should take around 30 minutes to walk. This train connects Lagos on the Western side of the Algarve with Vila Real de Santo António on the Eastern side (there’s a change at Faro).

Bus #110 goes between Portimão and Lagoa, stopping in Ferragudo on the way. It also stops at Praia dos Caneiros and Sesmarias, allowing you to reach nearby beaches.

There are excellent bus connections from Portimão, both regional, national, and even international (to Seville especially). Tickets for long distance trips can be purchased on Rede Expressos. There’s also Flixbus.pt, which is a useful website for discounted tickets to popular locations like Lisbon, Porto, and Madrid.

There is also a ferry which goes between Ferragudo and Praia da Rocha in Portimão, but this is aimed at tourists rather than locals.

7 thoughts on “What it’s Like to Live in Ferragudo… Should You Move Here?”