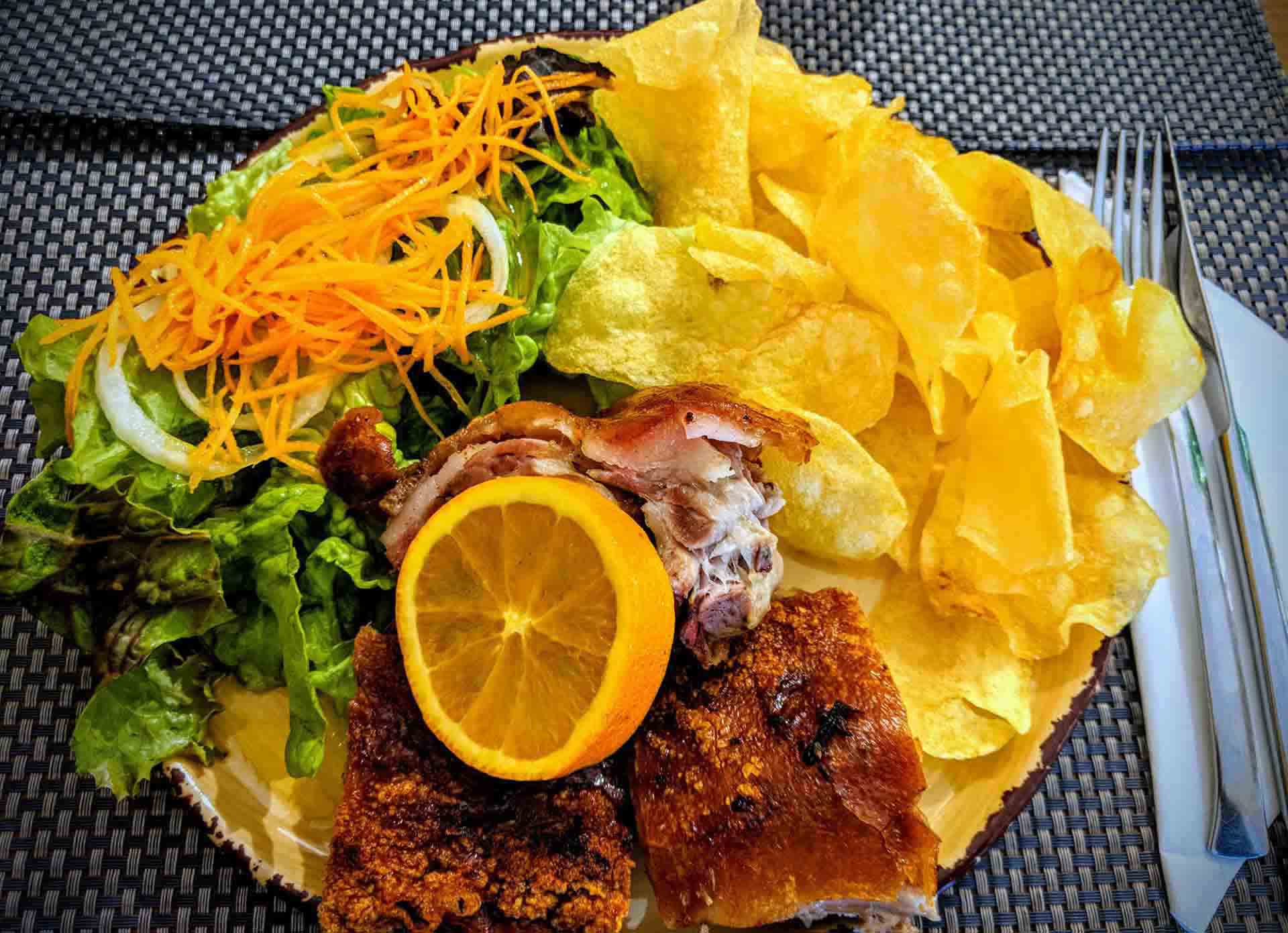 Leitão is a suckling pig, normally a pig that’s between 4 and 6 weeks old and still feeding on its mother’s milk, that’s basted and spit-roaster over a wood fire. It’s absolutely delicious, and one of Portugal’s best dishes.

A leitão restaurant is heaven for foodies, but hell for vegetarians. Leitão literally translates as piglet, which is what you’ll often see written in the English menu, and it’s very hard not to think of Winnie the Pooh when you see that.

If you can get past the barbarity, and the fattiness, this is a delicious dish. The piglet is roasted in a paste that’s made from pepper, garlic, salt, bay leaves, and lard and then impaled on a metal pole before it’s roasted over a wood fire. The chef or assador continues to baste the meat throughout, which is usually a cooking time of roughly 2 hours. The result is meat that’s tender, fatty, and juicy on the inside but crisp on the outside. It’s pork perfection.

Leitão is often served with what are essentially homemade crisps or very thin game chips (crisps basically), although the most traditional restaurants (particularly in Bairrada) prefer to serve it with boiled potatoes. Some also offer rice. 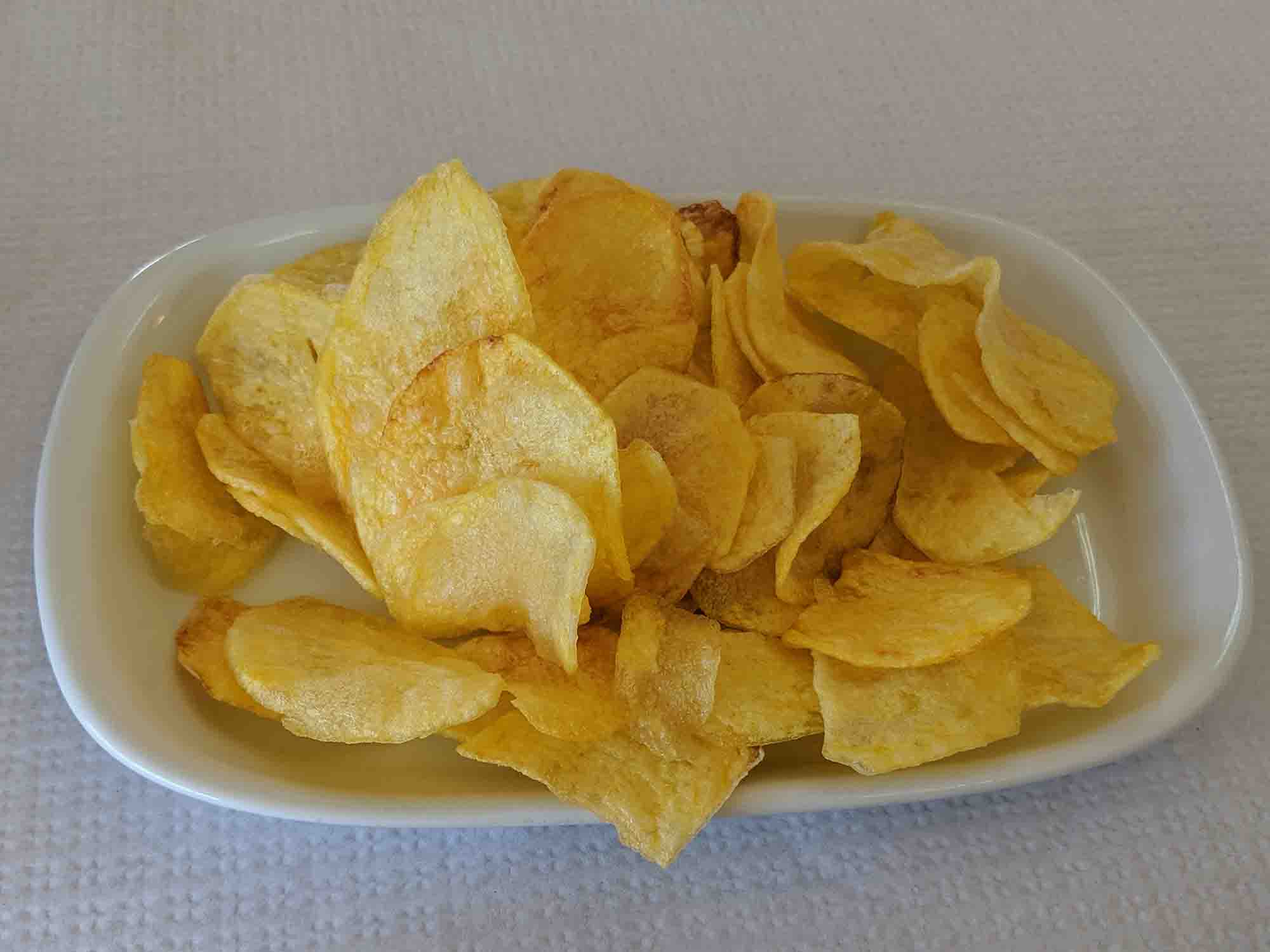 It’s normally garnished with orange and accompanied by a salad, both of which help to cut through the fattiness of the dish. Leitão can also come as a sandwich (sandes de leitão), but most people prefer a plate of leitão and sides (leitão no prato).

Tip: Most people find the “Portuguese chips” disappointing, as they are expecting French fries or a chunky British chip. If you don’t want a plate of crisps (chips to Americans) with your leitão, go for rice or boiled potatoes instead.

There are a couple of different wines that go well with leitão. Espumante, Portugal’s sparkling wine, is commonly served as leitão and espumante are often associated with the same region: Bairrada. A bottle of espumante doesn’t usually compare to champagne or cava, but it’s simple, goes down easily, and very affordable. Espumante is normally a white wine, but you can get red espumantes as well.

Bairrada is also a big producer of red wine. It’s nowhere near as famous or as popular as the Douro or Dão, and it’s often hard to find Bairrada wines outside of Portugal, so this is a good excuse to give it a go.

Although espumante is typical, another option is Vinho Verde which comes from the region of the same name in the North of Portugal. Vinho Verde is a crisp white, low-alcohol wine, that has a slight spritz. It’s very easy to drink, and is very much the crowd-pleaser.

Leitão isn’t cheap, especially if you’re travelling alone. It’s also often priced per kilo on the menus, which is quite awkward for those visiting Portugal as you never know how much to order.

Don’t be afraid to ask how much you should order, if you’re not sure. If it seems too expensive, a good compromise is to order a leitão sandwich – something that most leitão restaurants offer as well. 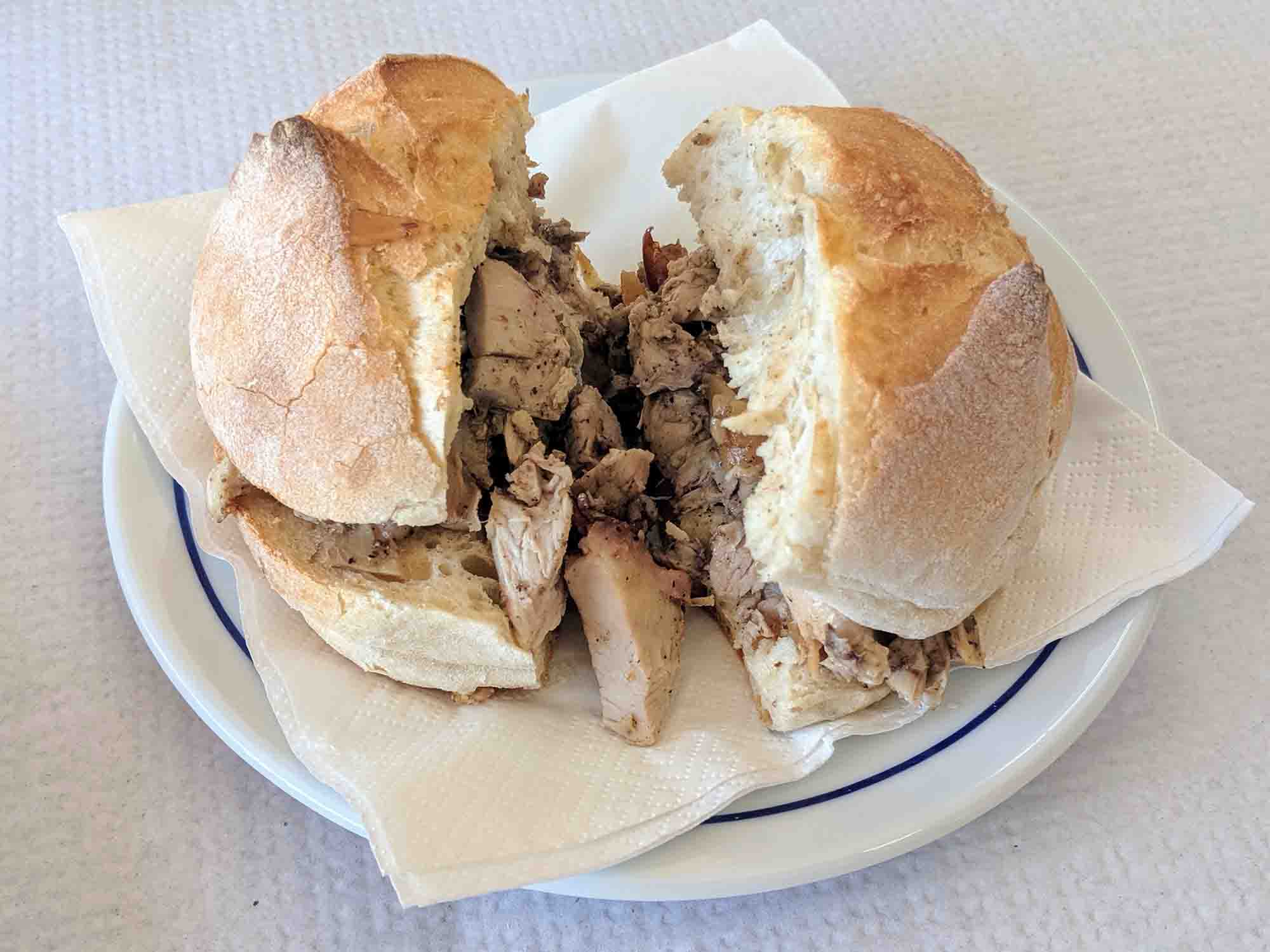 While the best way to enjoy leitão, at least the first time, is as a full meal with potatoes or game chips and a salad (leitão no prato), leitão also comes in sandwich form (sandes de leitão).

This is usually a papa seco bread roll (the same bread rolls used for a bifana or a prego), leitão, and a sauce which is usually a peppery sauce. It’s definitely tasty, and one of Portugal’s best sandwiches.

Where to eat Leitão

Leitão is available throughout Portugal, although certain regions like Bairrada specialise in it. If you want to try the best leitão in Portugal, it’s worth making a special pilgrimage to somewhere like Mealhada in Bairrada (see below).

Anywhere in this region will have plenty of leitão restaurants, though. If you’re visiting Coimbra, for example, you’ll be able to sample leitão here. There are quite a few restaurants in the city centre, and just as many on the country roads outside of Coimbra and in the surrounding towns. In fact, many of the places near Mealhada can be just as good but are cheaper than the restaurants in Mealhada itself.

That doesn’t mean you can’t get good leitão in the rest of Portugal, of course. You can, and you will find plenty of restaurants that offer it. Although some restaurants will offer it as one of many dishes on their menu, it’s better to go to somewhere that specialises in it.

These restaurants often seem to be on the side of major road (e.g. the N125 in the Algarve) and usually will have the word leitão in the name of the restaurant e.g. Solar dos Leitões (Alentejo), A Lojinha do Leitão (Porto), and Rosa dos Leitões (Algarve).

Having a person’s name and the word leitão is quite common (e.g. Rosa dos Leitões or O Leitão do Zé) is quite common, but double check it’s a leitão restaurant. As well as being the name of a Portuguese dish, Leitão is also a common surname in Portugal and the person may actually be a lawyer, dentist, or estate agent.

Mealhada is a small town of around 5,000 people that’s located between Lisbon and Porto, and it’s mecca for leitão lovers. Many of the restaurants here will serve hundreds of customers per day, and cook close to a thousand piglets each. If you’re driving between the two cities, or visiting nearby Coimbra, it’s definitely worth stopping up for lunch here.

The restaurants are mainly located just outside of Mealhada, rather than in the town centre, on the EN1 road (if you’re driving on the A1, you’ll need to come off by taking the Mealhada exit).

There are plenty of restaurants to choose from, including Pedro dos Leitões which is the original leitão restaurant, and some to consider are:

If you’re visiting Portugal in September, you could also attend the leitão festival (Festa do Leitão da Bairrada) which usually takes place towards the start of the month.

Leitão is normally associated with Portugal’s Bairrada region, but it’s also typical in Negrais as well. Negrais is a small town close to Sintra, and around 40 minutes from Lisbon, that claims to has been cooking leitão for longer than Mealhada but has never managed to achieve the fame Mealhada has.

There are several restaurants in Negrais that specialise in leitão, including O Caneira which claims to be the first place to serve up the dish in Negrais, that are worth visiting.

Pork is a bit part of the Portuguese diet, and some of the best Portuguese dishes are made from pork. Another pork dish to look out for is porco preto, particularly dishes like secretos de porco preto. This is the meat of the black Alentejo pig, a pig that’s fed a rich diet of acorns. It’s incredibly delicious, and unlike any pork dishes you’ll have had before.

Have you tried leitão? What did you think? Share your thoughts and reviews by leaving a comment below.