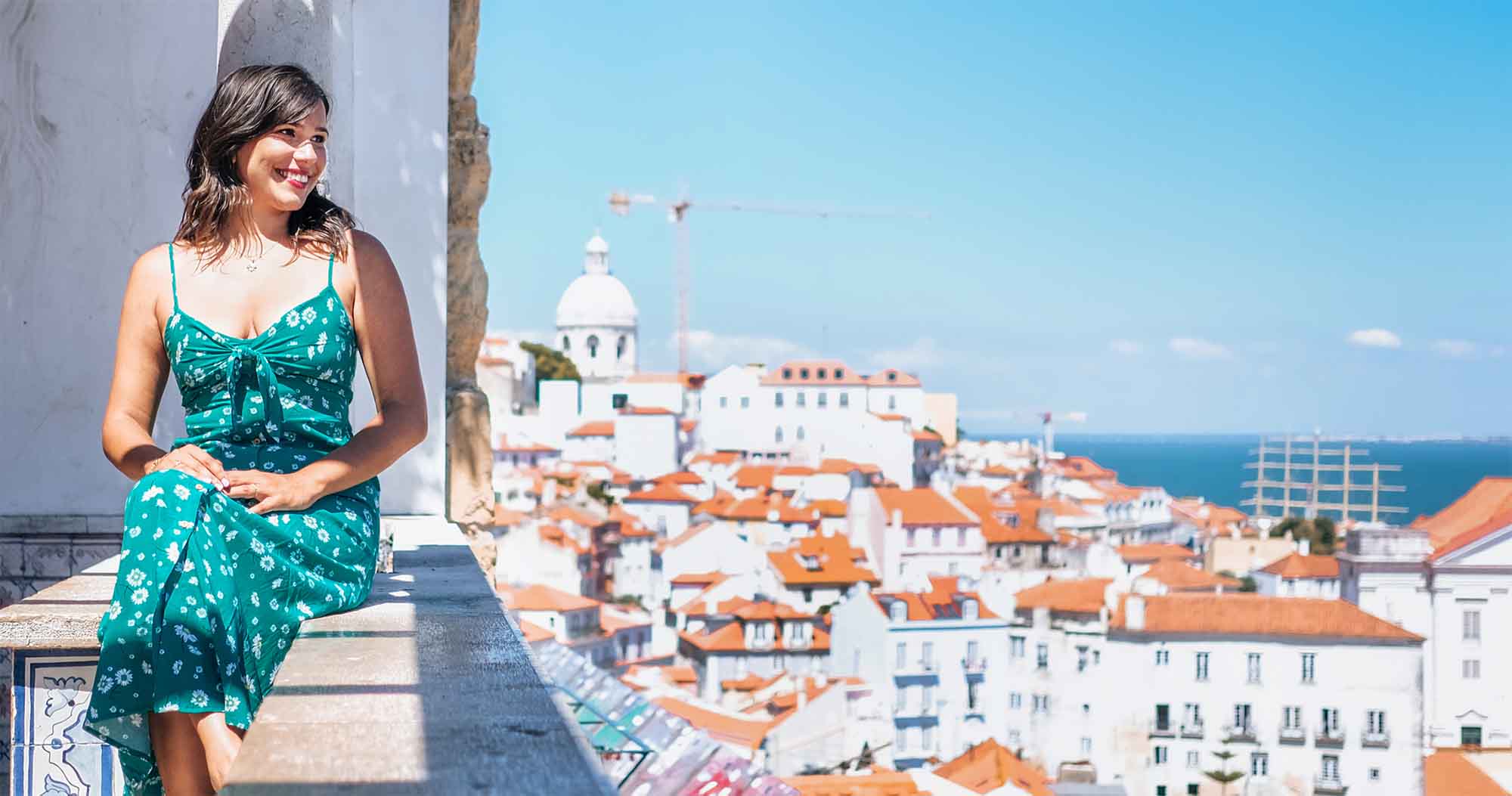 Liz Sharma spotted a need for more engaging content for people learning European Portuguese. She set up Talk The Streets, which has become one of the most popular YouTube channels, and later set up her own very popular course.

In this interview, we discuss how she learned Portuguese and where she thinks language learners should focus when learning European Portuguese.

James: You have been studying Portuguese for quite a while now. I believe you studied Portuguese at the University of Manchester in the UK?

Liz: So I wanted to study Spanish at university, and lots of universities offered the opportunity to take up Portuguese from scratch at the same time. The course I did was Spanish and Portuguese studies.

James: And did you love the Portuguese language then as much as you do now?

Liz: I’ve always had this passion for Portuguese. One thing that always sticks with me from my university days is that when I went to get my textbooks, Portuguese books were filed under “miscellaneous languages” despite it being the sixth most widely spoken language.

I thought, this can’t be. I’m going to be the Portuguese ambassador to the whole university. So I set up a Portuguese society. There’d never been one before. I just got really obsessed with it. I organised trips and socials. I started finding all the Portuguese-speaking students in the university.

It just became a genuine passion. There’s a guy also living in Lisbon now, Miguel, who to this day says that I stalked him at uni because I saw bottles of Super Bock outside of his house. I don’t remember that being how we met, but he insists that it is. So, that’s the level of how obsessed I was with Portuguese from the start.

James: With Portuguese from Portugal specifically or Portuguese culture worldwide?

Liz: I was extremely captivated by Brazil, Brazilian culture, and Brazilian Portuguese as well. I had always planned to go to Brazil on my year abroad, but then I became ill and I wasn’t able to go.

I missed the semester start dates and I ended up going to Coimbra instead. I wasn’t that excited about that prospect because I was supposed to be on a beach in the Northeast of Brazil. You’re telling me I’ve got to go Europe to some fuddy-duddy old university. So I was not impressed. But, actually, it was the best thing that ever happened to me.

James: What was it like to study in Coimbra?

Liz: It was a completely different experience. Coimbra is a very student-oriented city and the students are the heartbeat of the city. Seeing the students walking around in heavy black capes and ties was very strange to me in the beginning.

The biggest thing that happens in Coimbra is when people finish school called Queima das Fitas. It’s a festival with parades, floats, and huge concerts. The students dress up in a top hat and a cane and bow ties, and they have different colors that correspond with the faculty that they went to.

I lived in a house of all girls that was above a República of boys. So, yeah, there were definitely nights where you didn’t sleep because they had parties going on downstairs.

James: What level of Portuguese did you have going into this?

Liz: Good question. I was always good at the language. I think that year was about connecting what I already learned at university previously.

James: This was the practical application year?

James: Coming here with a solid background must have made integration a lot easier?

Liz: When you move to a new country, it’s already stressful and you’ve got so many other things to worry about. If you have that grounding, you’ll have a great head start.

James: If someone was moving to Portugal in six months’ time, what would you recommend they do?

Liz: I think that there are three pillars to consider as a beginner: pronunciation, real life Portuguese, and grammar.

Pronunciation is the number one thing. You need to understand not only how to make the sounds, but also how to hear the sounds. This will help you significantly.

Real life Portuguese will help as well. Rather than learning how to introduce yourself or talk about your family, focus on the words and phrases you’ll need for the supermarket, the post office, or at the coffee shop. Memrise is quite useful for this.

With grammar, just focus on the essential. It’s easy to get bogged down here. Only learn what you need to learn and focus just as much on the pronunciation and real life Portuguese.

James: And how much time should someone dedicate to this?

Liz: I say little and often. 30 minutes a day is great, and obviously any more is ideal, but it’s better to do little chunks regularly rather than doing big chunks in one sitting.

James: But structure is important too. A good course like, say, your Portuguese Pro program can give you that structure.

Liz: Absolutely. My program is very focused in practical Portuguese and in getting you to a level where you can hold a conversation in the past, present, and future as quickly as possible. I try to use a bit more of a modern approach and so it’s definitely not your standard tutor with a textbook.

Consolidation is important too. You need to use what you’ve learned in a real-life scenario.

James: And then someone could hold a conversation in Portuguese.

Liz: I get people to speak from day 1. The quality of your conversation will naturally be very different at the end of the course, but that’s something I always drill into my students.

James: So then you came back and finished university in England. Then there was a period in Brazil?

Liz: There was a period in Brazil straight after university. I still had a huge chip on my shoulder that I’d never been there, so I wasn’t happy to let that slide. I found a way to go to Brazil through an organisation called AIESEC. They organise exchanges for students or people who’ve recently graduated.

I found a placement in the Northeast of Brazil in Fortaleza and worked on an education project, helping in a deprived area with extracurricular activities. It was extremely challenging but extremely rewarding at the same time.

Although I took great pride in the fact that I spoke European Portuguese, I had to modify it when I went to Brazil because people thought it was hilarious. Very quickly, I adapted. I’m very good at mimicking accents anyway, so it wasn’t hard to pick up the Brazilian jeito of speaking.

James: And then Portugal?

Liz: I moved here while I was working in PR. I said if I’m still single when I’m 30, I’m going to leave the UK and go and do something that I want to do. Not to find a boyfriend, but to do something for me.

It took 2 years to work out a moving strategy. Remote work had always been an integral part of my company so my boss kindly said that I could.

Within 4 days of moving to Portugal I’d met my now-fiancé and within 6 months I’d bought an apartment. I felt my life was on pause in London and someone hit play again when I got here.

James: As someone who speaks “European Portuguese” and “Brazilian Portuguese,” do you think there’s much of a difference?

Liz: It’s an interesting question. I think there’s a much greater difference than between, say “American English” and “British English.” So, there is a noticeable difference there. With English, it’s mainly down to accent and vocabulary whereas there are grammar differences between European and Brazilian Portuguese. I think that’s why they separate the two academically.

James: And is there a difference in difficulty between the two?

But I always tell my students that it’s still very important to understand Brazilian Portuguese and have contact with the language because you’re going to meet Brazilians here.

Liz: For any type of practice, whether speaking or reading practice, I say that it’s beneficial to use Brazilian sources. The only time I don’t recommend Brazilian sources is for listening when you’re a beginner because it will confuse you.

James: And what are the unique challenges of European Portuguese?

Liz: Pronunciation, as we’ve discussed. European Portuguese is very “closed” in contrast to Spanish or Brazilian Portuguese. That makes it difficult to pronounce and difficult to understand. Understanding open and closed vowels is game-changing.

Another problem students have is understanding locals, which is more or less the same problem.

Finally, another issue is having the confidence to speak. That’s not unique to Portuguese. My best advice is that you have to get comfortable with being uncomfortable, accept the fact you’ll make mistakes, and be okay with it.

James: Pronunciation really seems to be the key issue here.

Liz: One of the first videos on my YouTube channel that did really well was about understanding fast Portuguese. It discusses how European Portuguese speakers tend to drop off sounds and run several words together. As an example, instead of hearing “espera aí,” which means wait here, you’ll hear “peraí.” You normally don’t get taught this in a classroom environment.

The grammar can be a challenge as well but, as mentioned, don’t try to cover everything. Focus on what you need.

For improving grammar, I’m a big fan of Portuguese: An Essential Grammar.

It’s very easy to get disheartened when learning a language but I know that I feel at home here because I’m comfortable with the language. I can get what I need, express myself, and be myself. That’s been so integral for me being happy here and I want that for other people too.

James: It sounds like things went fairly easy for you. Did you have any challenges settling into Portuguese life?

Liz: I did think because I spoke the language that I would be fine, but I was wrong. Portuguese bureaucracy is going to be a challenge regardless of who you are or how good your Portuguese is. I’ve definitely had the bureaucratic nightmares that everyone else has had but that’s sorted.

James: What are you most excited about for the future?