Situated in the North Atlantic Ocean, closer to Morocco than it is to Portugal, the island of Madeira is a unique part of Portugal with its own history, customs, and food. Many of these dishes are only really found in Madeira, and haven’t made their way into mainstream Portuguese cooking, and the only way to try them is to go and spend a few days on Madeira.

This article covers food that’s specific to Madeira, and that you’re only really likely to find in Madeira. The main article on Portuguese food covers Portuguese dishes from across all of Portugal, many of which you’ll also find in Madeira as well.

Peixe espada com banana is one of Madeira’s most famous regional dishes. The peixe espada (black scabbardfish) is usually either breaded or battered and then fried along with a banana and sometimes it’s served with a passionfruit and custard sauce. 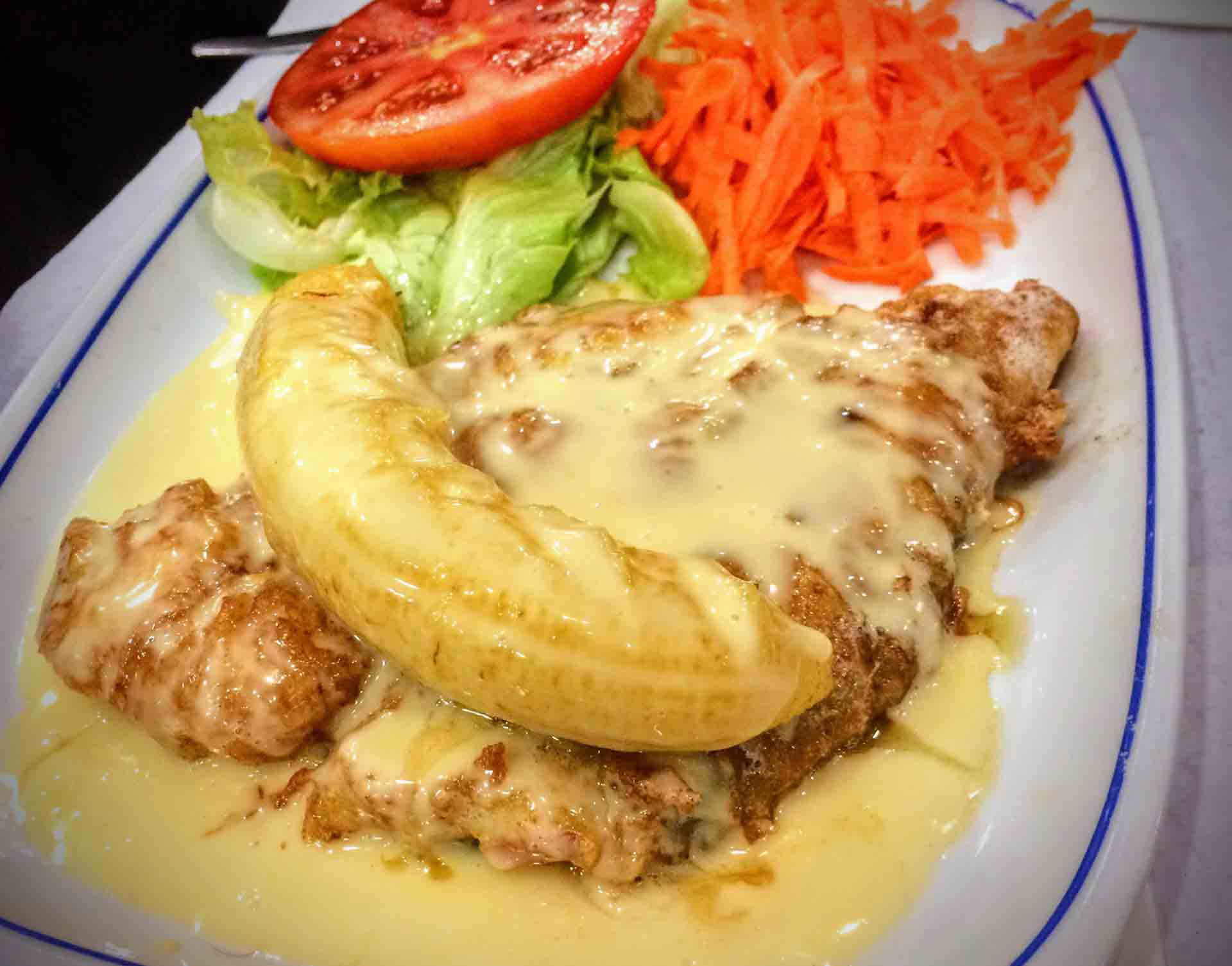 This is quite a unique flavour combination, but it’s always fun to try new things when you’re in a new place. You probably won’t find this dish elsewhere in Portugal, or anywhere else in the world.

Estapada is food cooked on a skewer, and it’s a style of cooking that’s particularly popular in Madeira. Here, in Madeira, the wooden skewers are made from bay laurels (the trees that bay leaves grow on) which gives the meat a unique flavour. 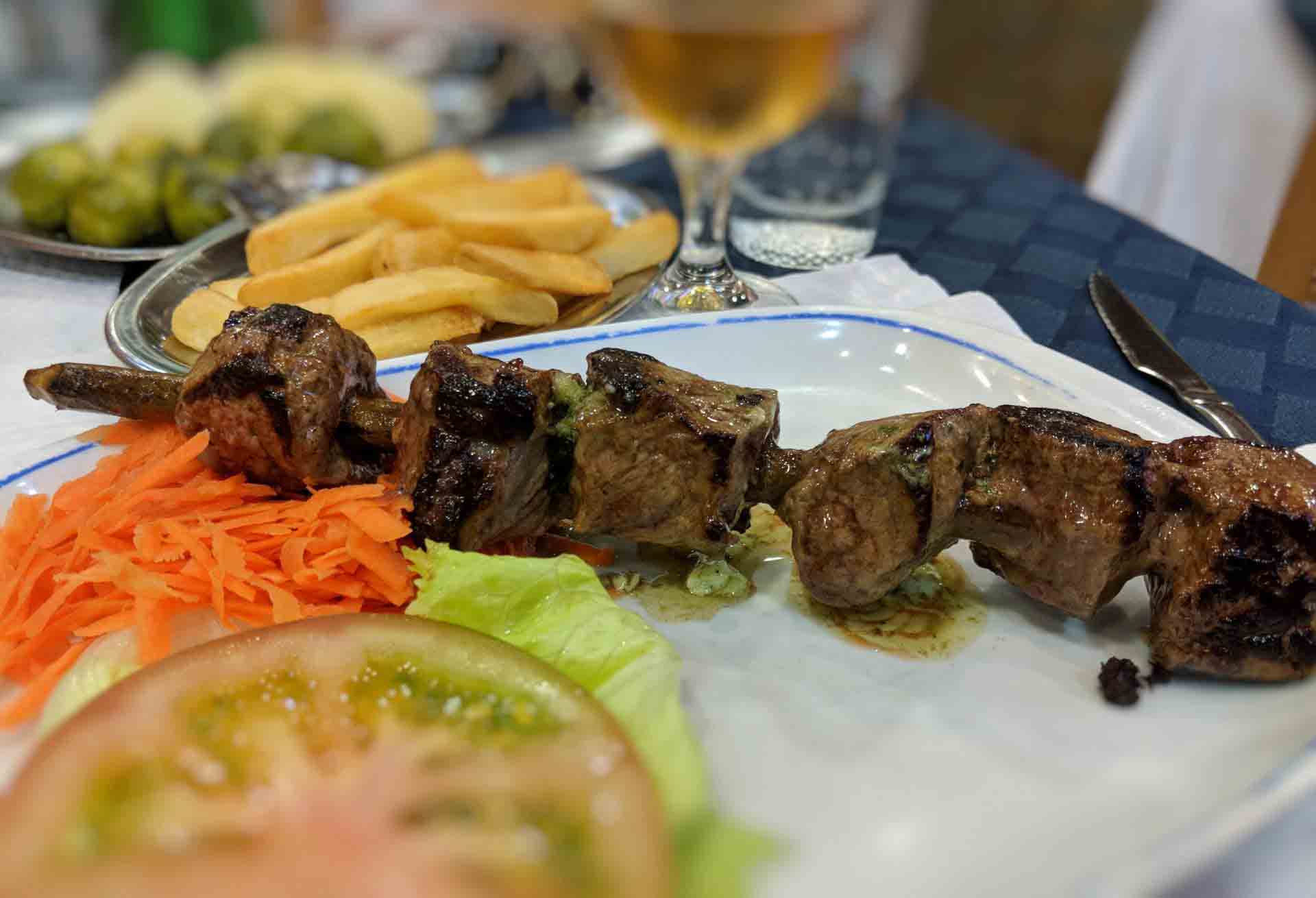 Picado is a simple dish of small cubes of beef or veal that are seasoned with salt, pepper, and crushed garlic and fried with “morangueiro” wine, water, olive oil, butter, bay leaves, and tomato puree. It’s normally accompanied with chips (french fries) and is usually placed in the centre and shared among a group of friends.

Bolo de caco is Madeira’s regional bread, named after the caco or basalt stone slab that it’s cooked on. The bread is extremely soft, and it’s often served with garlic butter.

Bolo de Caco isn’t just available in Madeira, and you’ll also find it in some bakeries in Mainland Portugal as well.

Lapas or limpets are another Madeiran specialty, and you’ll find them in restaurants in Madeira and in The Azores. These are similar to clams, although they tend to be chewier. 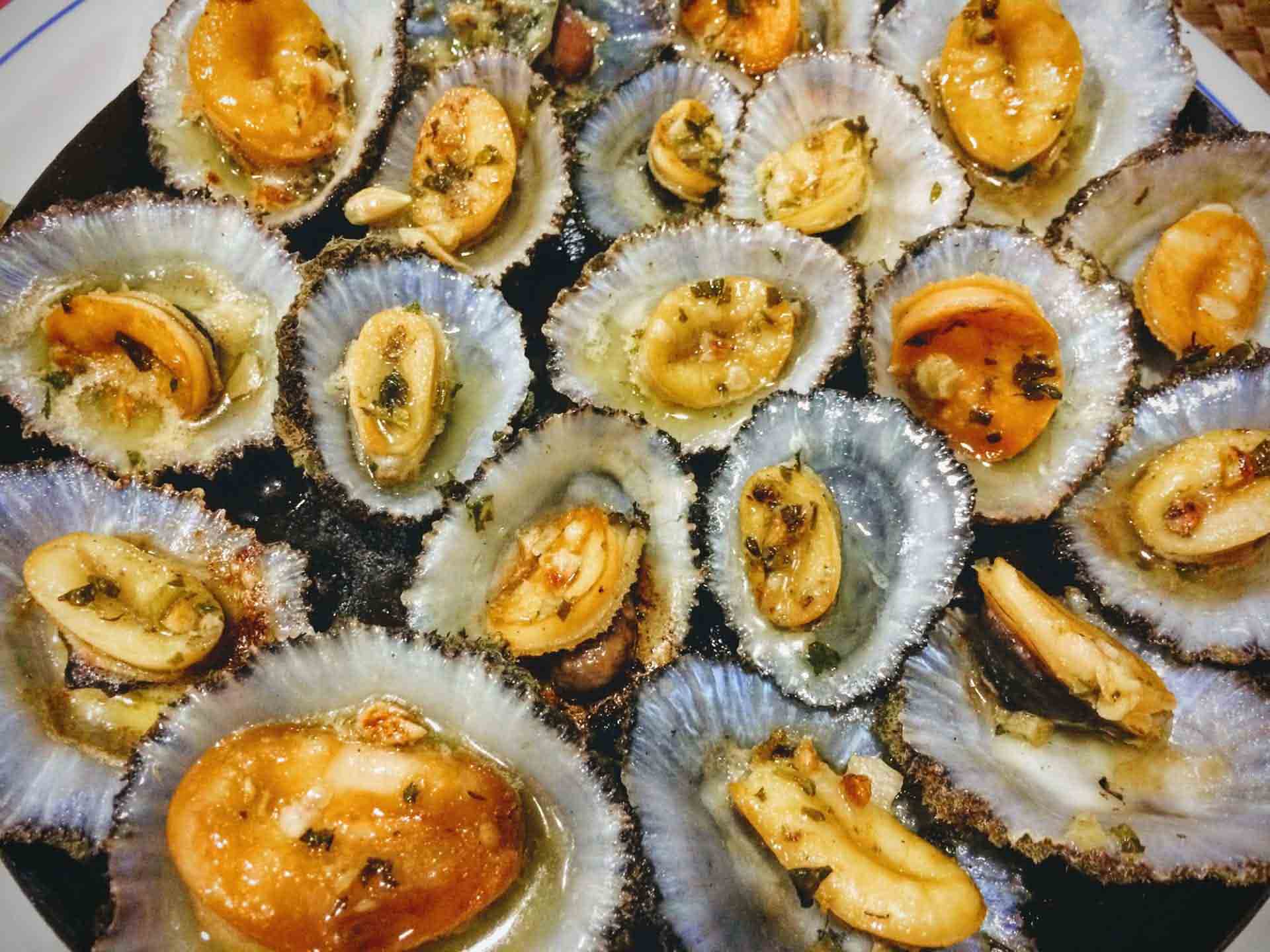 They are usually served in the frying pan that they’re cooked in, with slices of lemon on the side and, in Madeira, they’re often served with bolo de caca as well.

Portugal is famous for its fortified wine, but only really for Port. Portugal’s other fortified wine, Madeira, just doesn’t have the same reputation as its mainland cousin. 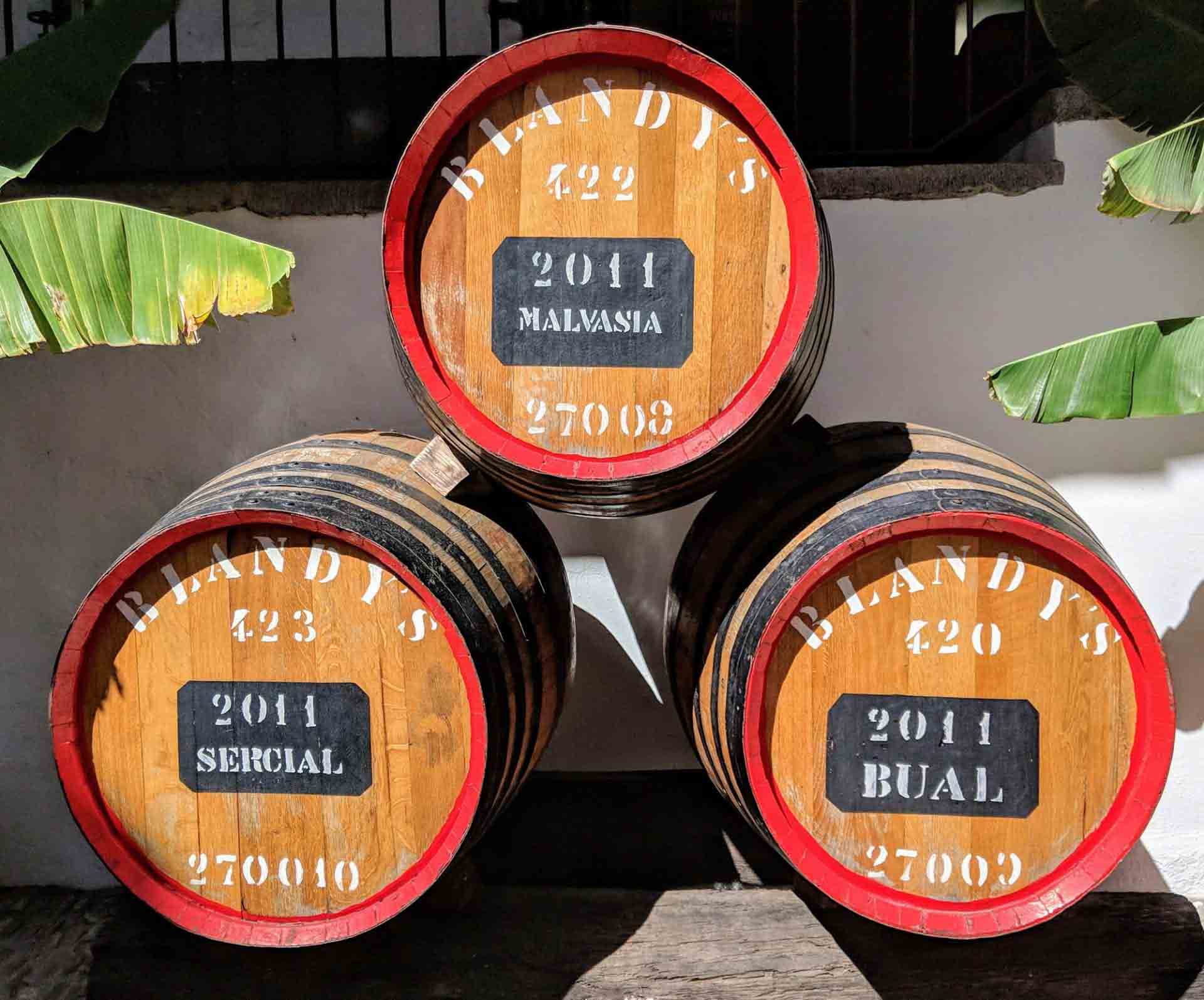 There are a couple of differences between Port and Madeira, but one of the main – and unusual – differences is that Port is stored and matured in a cold cellar whereas Madeira is stored in a warm place like the attic.

People who visit Porto tend to fall in love with Port wine once they’ve been to a few cellars, and found a style (e.g. Ruby, Tawny, White, etc.) that’s right for them. Madeira, on the other hand, is much less of an instant crowd-pleaser.

Brisa is a range of soft drinks produced and distributed in Madeira. If you’re thirsty and want to grab a coke or a 7-up, why not try something more local instead? 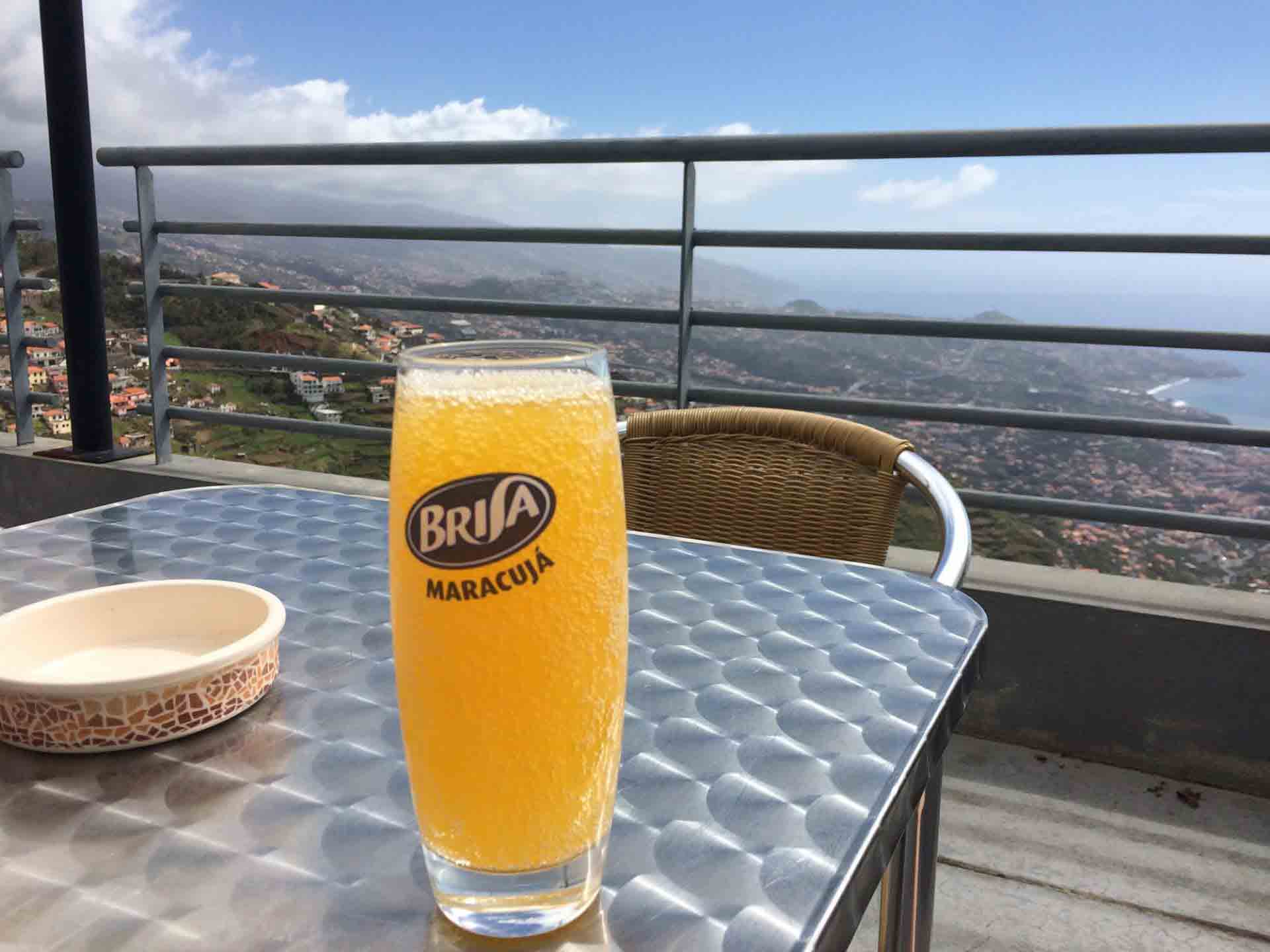 Poncha or punch is a drink you’ll find in bars through Madeira and many bars, particularly in Funchal, specialise solely in poncha. It is made from Aguardente, honey, sugar, and lemon juice, and different fruit juices. 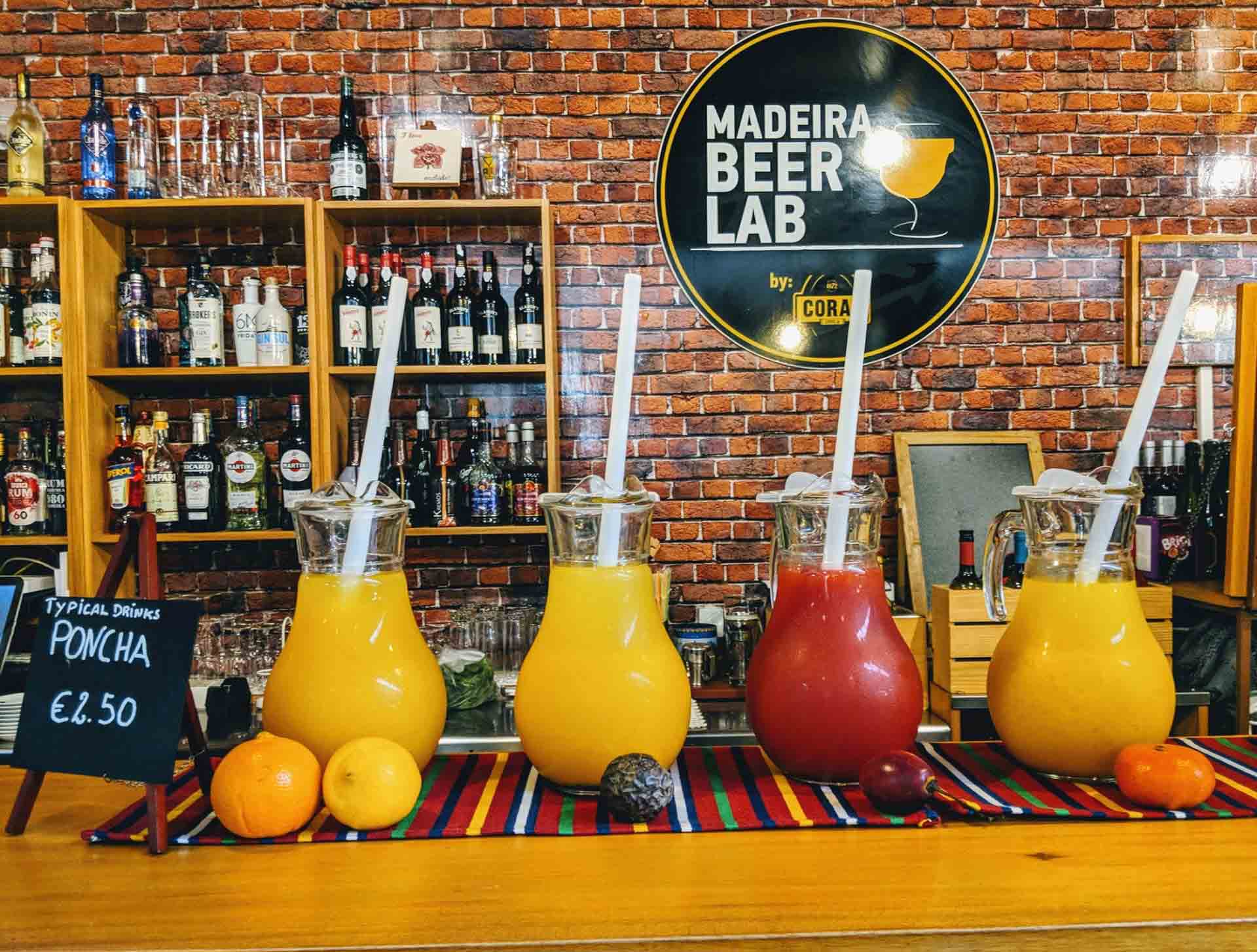 Poncha may have been inspired by an Indian drink called pãnch, which led to the creation of punch by the English. Pãnch means five as it’s made from five ingredients – alcohol, sugar, lemon, water, and tea or spices – which is almost identical to the recipe for poncha. Nobody knows for sure whether pãnch inspired poncha, but they do know that poncha inspired the Caipirinha.

You’ll see Poncha bars when you’re walking around Funchal. They’re incredibly colourful, and it’s almost impossible not to stop walking and go in for a drink.

Have you been to Madeira? What did you think of the food from Madeira? Let us know your thoughts and reviews by leaving a comment below.