Skip to content
Portugalist > Latest Articles > Food & Drink > Pico Wine: A Guide to One of the World’s Most Unique Wine Regions 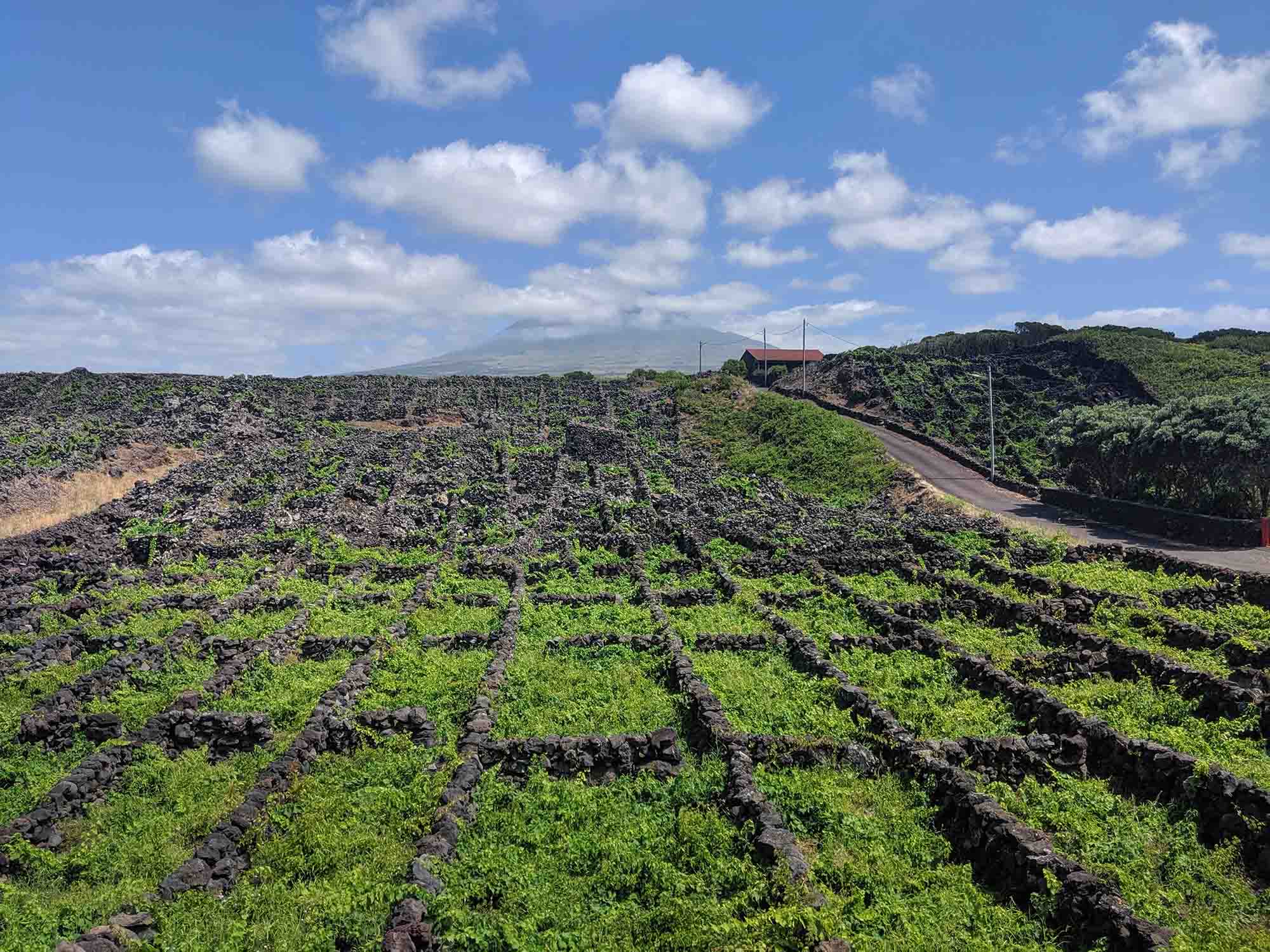 Although people are becoming increasingly familiar with wine regions in Portugal like the Douro, the Alentejo, and the Vinho Verde region, very few people have heard of the wines from Pico.

Pico has a very different climate than the rest of Portugal (bananas and pineapples grow on some of the islands in The Azores) and the volcanic soil is rich in nutrients. It is, however, not somewhere that vines should grow: when wine production first began, only 3.4% of the soil was arable. The fact that settlers were able to grow vines on Pico is considered something of a small miracle.

Pico is also probably Portugal’s most unique wine region to look at (although The Douro, with its sloping vineyards, is definitely a close second). Here, in this UNESCO World Heritage region, the vines run along the ground, on top of small black rocks (biscoitos), rather than neat rows of trellises. And, instead of large fields of vines, the vines are restricted to small squares that have black basalt stone walls built around them.

Pico’s vineyards are an incredibly unique thing to see. Pico is obviously the place to see them, and you don’t have to go far to see them: the Paisagem da Cultura da Vinha da Ilha do Pico, one of the best examples of Pico’s vineyards, is literally just metres away from Pico Airport and a short drive from Madalena.

This isn’t the only place that you can see them on Pico. My favourite area was the São Mateus on the opposite side of the island, and I was surprised to see a small vineyard next to the Cooperativa Vitivinicola Da Ilha Do Pico (CVIP) in Madalena, the main town on the island.

You can also see these vineyards on some of the other islands in the Azores. Biscoitos on Terceira, for example, is also famous for producing wines using the same method, along with Graciosa.

Discount: Get 10% off Oh My Cod’s seven-day wine and food tour of Pico island when you use the code PORTUGALISTPICO

Although Pico’s vineyards are unique and beautiful, they weren’t designed like that for aesthetics alone. There’s a practical reason as well. Necessity is the mother of all invention, after all.

The stone walls which surround the small plots (called “currais”) are there to protect the vineyards from the elements. Wind is a big concern, especially wind that comes in from the ocean and carries salt with it. Larger walls, called “jeiros” separate the land from one farmer to another.

The little rocks or biscuits on the ground are there for heating. Those little volcanic rocks heat up during the day and then stay somewhat warm during the night, which helps the grapes that sit on top of them to ripen.

A brief history of Pico’s wines

Wine growing on Pico dates back to the 15th Century and, unsurprisingly, has religious origins. The first settlers arrived on Pico in 1439 and, after about 10 years of sobriety, started producing wine.

Although production has always been small, the wine developed an international audience: when Czar Nicholas II of Russia was executed in 1917, bottles of Verdelho do Pico were found in his cellar. John Bass Dabney, the first U.S. Consul to the Azores who lived on Faial in the late 18th and early 19th centuries, also played a role in marketing Pico’s wines, particularly to the US.

Faial actually played a big role in the Pico wine industry. Soil was shipped from Faial, workers would come over from Faial during the harvest time and, because Horta had a much better port than anywhere on Pico, wines were shipped to mainland Portugal and overseas from Horta rather than Madalena.

Unfortunately, Pico’s vineyards, like most European vineyards, were affected by diseases in the late 1800s: Oidium first and then Phylloxera. Sulfur was effective against Oidium (and the vineyards are still sprayed annually to protect it against Oidium), but the only solution for Phylloxera was to switch from Verdelho grapes to the disease-resistant vines from the United States. It wasn’t until the end of the last century that growers began replanting Verdelho.

Unfortunately the diseases had a huge economic effect on the island. It wasn’t just vineyard owners who were affected but also barrel makers, sailors, basket makers, and day labourers.

Recently (since the 70s), Pico wine production has picked up again. There is a growing interest in the wines, both in mainland Portugal and internationally, and local vineyards and cooperatives are working hard to meet demand (while simultaneously increasing quality).

Currently 17 grapes are grown on Pico:

Whites tend to be where Pico excels, although the reds are worth a sample as well.

You’ll see these unique vineyards all over Pico, often very small plots, but it’s worth going to one of the bigger wine growing parts of the island to get the full experience.

Two of the main regions are:

Parking is often just by the side of the road (the road is less busy at at Paisagem da Cultura da Vinha da Ilha do Pico) and there doesn’t seem to be a problem with wandering through the vineyards. Obviously, be respectful and don’t eat the grapes.

There are several small wine museums on Pico (and another good one on Terceira). If you’re interested in wine, it’s actually worth visiting a few of them – they often have bits of information or artefacts that the others don’t have.

And, if you visit Terceira as well, be sure to visit the wine museum in Biscoitos (map).

There are a few places around Pico where you can try the local wines.

And, of course, many of the local restaurants on Pico will also stock Pico wines as well.

Buying Pico wines isn’t always easy – even on Pico itself. I visited the Cooperativa Vitivinicola Da Ilha Do Pico (CVIP) in Madalena expecting to find a huge choice of wines that I could buy but, in actual fact, they only had four white wines for sale. Outside of Portugal, and even outside of The Azores, it’s going to be even more difficult.

Brandy & other wines produced on Pico

Brandy is also produced on Pico; from figs and also from wine. The production of brandy started on Pico roughly around the same time that producing Verdelho wine grew popular: sometime in the 18th century, when there was so much wine being produced that there was an excess, brandy was added to the wine (a technique used in Port making).

In 1766, the Royal Treasury Superintendent decided that one in every four barrels of the 2,000 wine barrels that were produced annually should be distilled to make brandy. Initially, there was a large market for Pico brandy, particularly in Brazil, but this changed when Cachaça started being produced there.

Pico Brandey can be hard to find, but you can get “Picarota” at the Cooperativa Vitivinícola da Ilha do Pico in Madalena. Made in Azores, an online shop that specialises in Azorean products, stocks this, along with a few other Azorean “aguardentes.” Made In Azores also ships internationally.

You’ve heard of Port wine, and you may have even heard of Madeira wine, but did you know that Pico produces a fortified wine as well? Licoroso wine is a late-harvest of fortified wine that’s at least 16% in strength.

You can get Licoroso wine at the Cooperativa Vitivinícola da Ilha do Pico in Madalena. Czar, one of the popular brands in The Azores, shouldn’t be too hard to stumble across either. Outside of The Azores, however, it does get a little tricky but, thankfully, Made in Azores has a few options.

One of the native American grapes that was introduced was Isabella. This grape was resistant to diseases, produced abundant harvests, and lead to the production of a wine that The Azores has become  famous for: Vinho de Cheiro.

Literally translated as “wine of scent,” Vinho de Cheiro is a simple and low-alcohol table wine (typically 6-10%) that’s drunk at picnics, festivals, and used in local dishes. This wine is only really available on The Azores, so be sure to try it while you’re there.