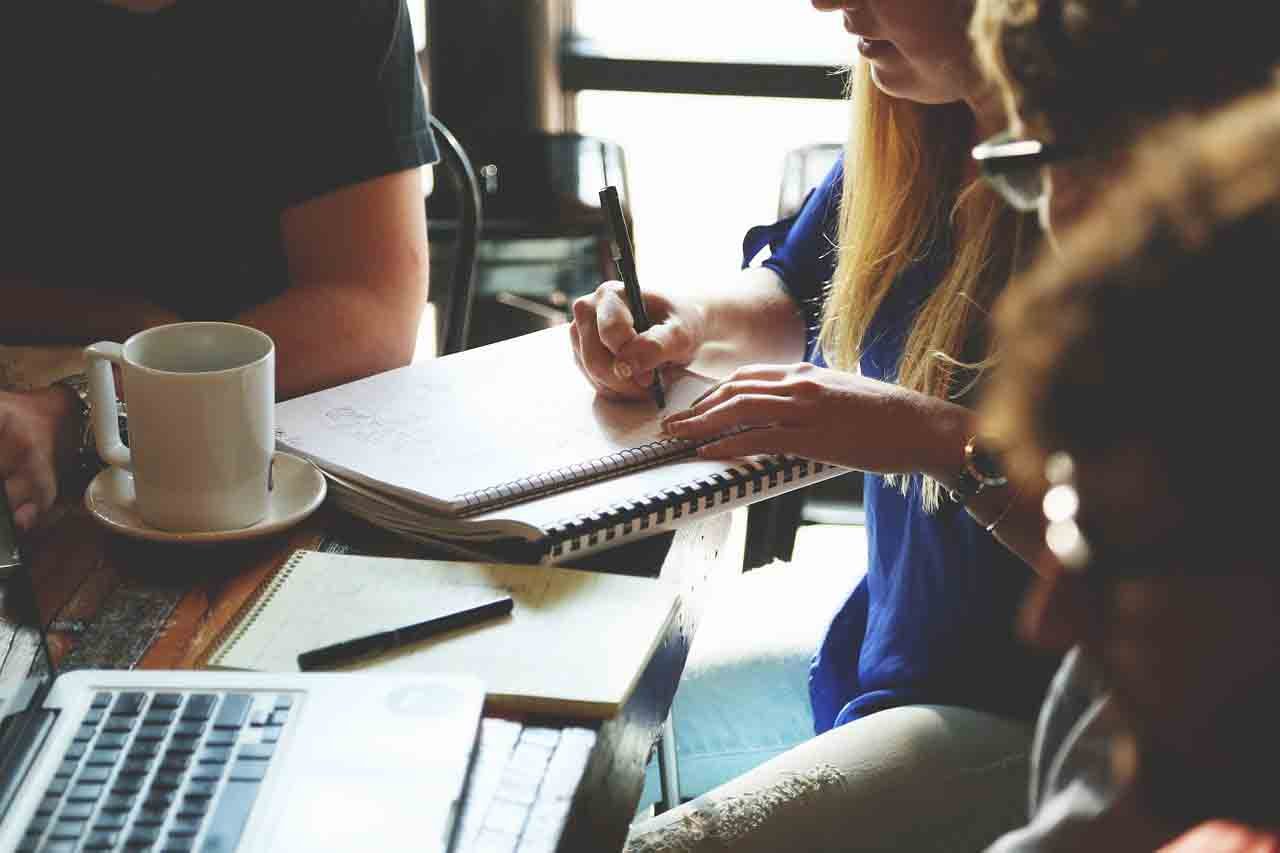 Portugal, particularly Lisbon, is fast becoming Europe’s main hub for digital nomads. There are co-working spaces all across the country and, increasingly, co-living spaces as well.

Co-living, for those not in the know, means sharing a house with other digital nomads, freelancers, and remote workers. During the day, everyone works on their projects – usually at an on-site co-working space – then, in the evening, there’s often communal dinners, drinks, mastermind sessions, nights out, and other activities. It’s a great way to meet other people and network as well, and it can be a welcome break from the isolation that often goes with being a digital nomad.

Some co-living setups are open year-round, while others only exist for a week or two of the year. Here are some of the best spaces in Portugal. 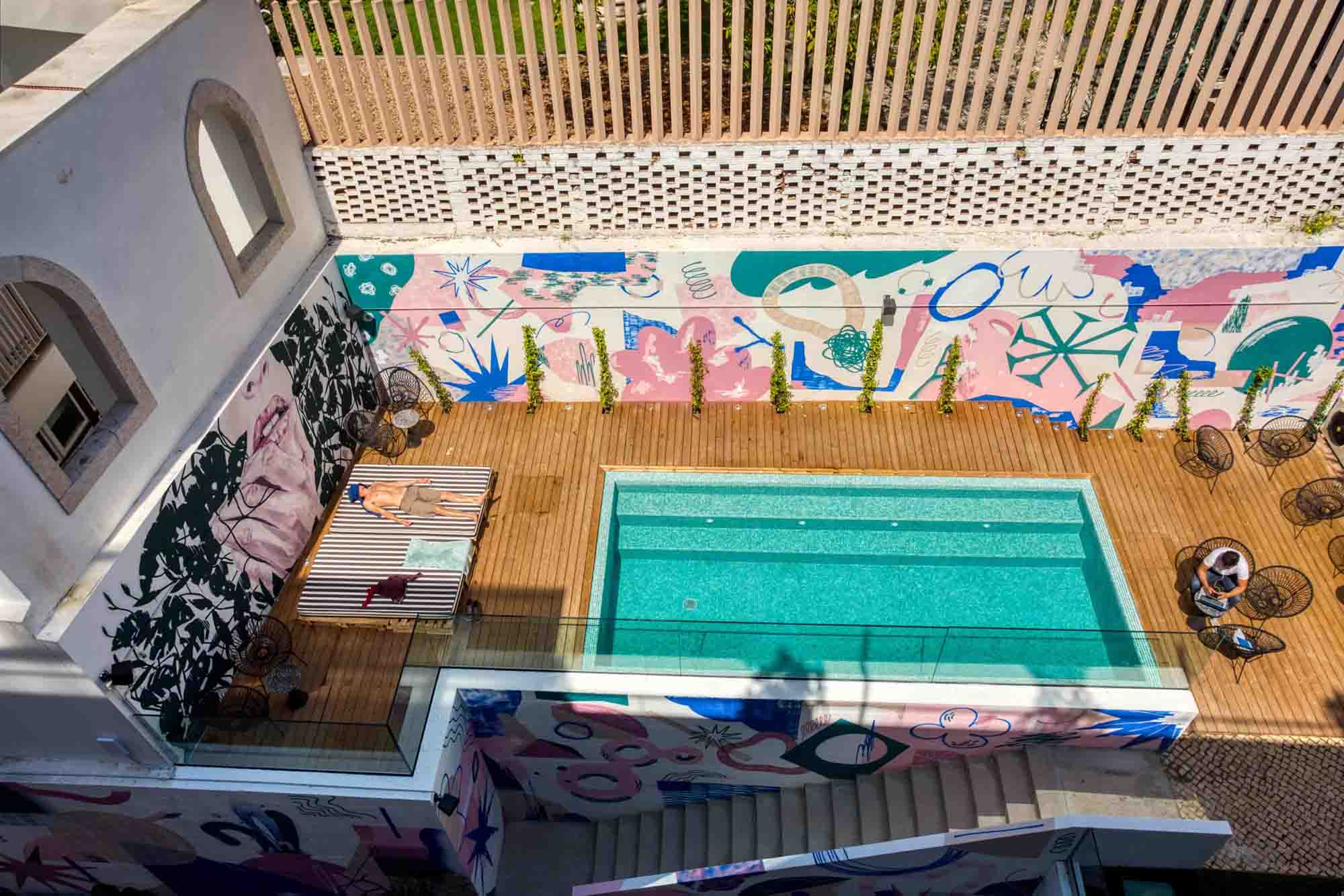 Selina has fast become one of the most popular venues for digital nomads in Lisbon. It offers a wide range of accommodation options from dorm rooms to suites, and has a common room, a co-working area (priced separately), a rooftop area, bar, and even a swimming pool.

Unsurprisingly given the swimming pool and other facilities, it’s also popular with digital nomads who are already living in Lisbon – especially when they run their free coworking days.

Outsite is one of the largest coliving spaces in Portugal, housing more than 30 en-suite rooms, as well as several shared kitchen facilities (one between every 5 rooms), a coworking space, and a cafe.

The house is centrally located in Cais do Sodré, one of the most popular locations in Lisbon for nightlife and a stone’s throw from the Timeout Market. Location-wise, there are few places more central than this although that does mean that it’s not the quietest part of Lisbon either.

From Outsite, you can easily get to most of Lisbon by foot, and there’s access to public transport nearby in the form of trams, buses, a metro, and a train station (which takes you all the way to Cascais). 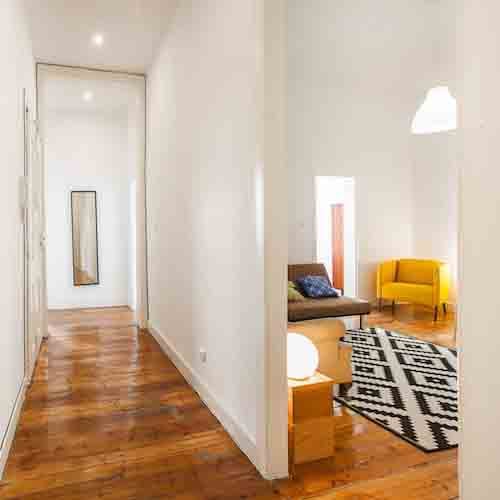 Prices start from $80 per night for a room with an en-suite bathroom and $55 for a bed in a shared room with a shared bathroom (prices on  are in USD). Outsite members get a 10% nightly discount, 20% weekly, and 30% monthly discount.

Outsite attracts a mixture of digital nomads and “normal people” and many of the people that stay there only stay for a few days at a time. This means that although it is a coliving setup, it can still be hard to get to know people – you’re going to have to get involved in the main Lisbon digital nomad scene as well.

Book directly with Outsite (using the link above) and your stay will also include access to Outsite’s coworking space. 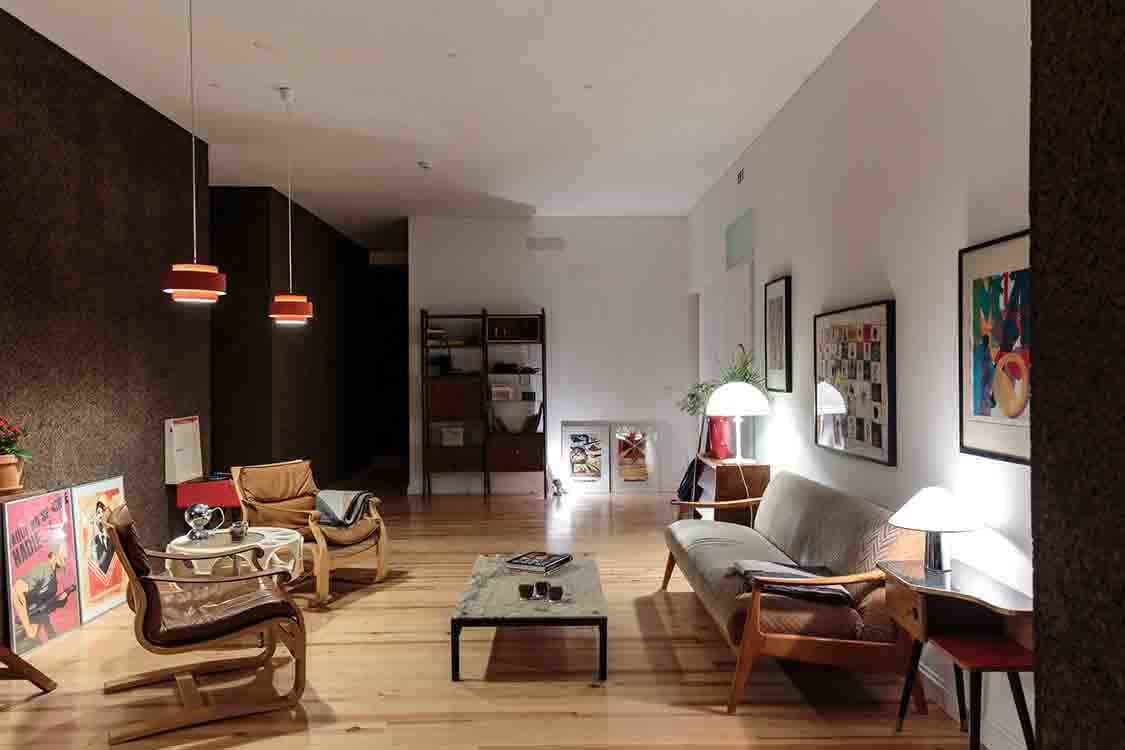 The co-working area includes 5 desks with space for up to 25 people as well as amenities like private lockers and access to a printer. 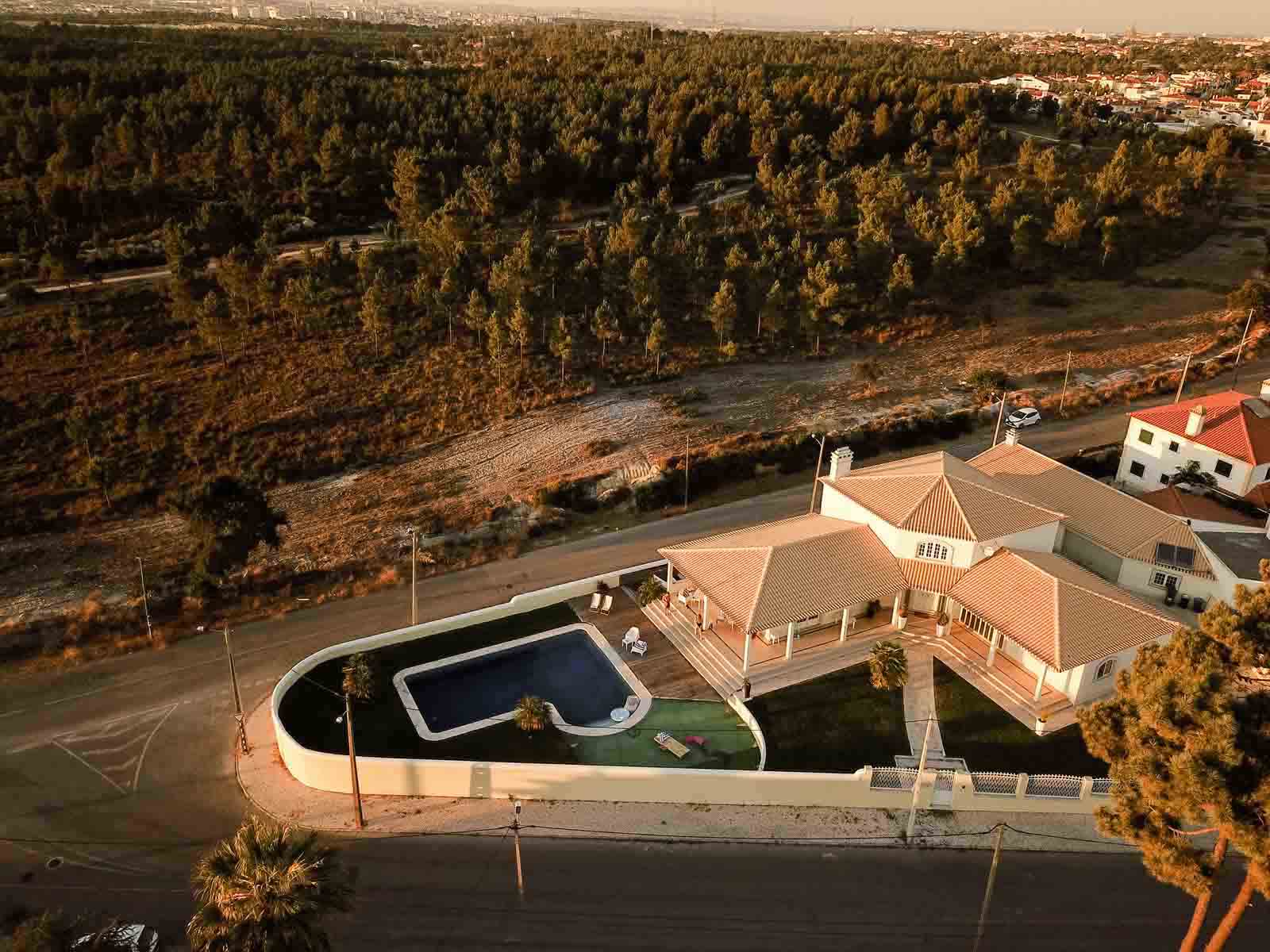 Situated just outside of Lisbon (around 30 minutes by car), Entrepreneur Houses is a popular coliving villa (with pool) for entrepreneurs and digital nomads visiting Lisbon.

Being 30 minutes outside of Lisbon isn’t for everyone: this co-living space works well for people who want to work and relax primarily, and come into Lisbon occasionally (e.g. in the evenings). There are usually other nomads going back and forth, so sharing a taxi is quite easy. Otherwise there’s public transport, and a 1-way taxi trip pp like Taxify or Uber will cost around €10.

Otherwise, the co-living space is perfectly setup for relaxing. There’s a beautiful pool, yoga and meditation, and communal meals – a great coliving setup.

The Sea Office (you can also book through booking.com) is situated across the river and to the South of Lisbon in the town of Costa da Caparica. Costa is known for its long sandy beach, and it’s also a popular surfing destination (especially in the winter). Costa is situated roughly 30 minutes by taxi from Lisbon, and there’s also a regular bus service that goes back and forth.

With just 4 different bedrooms, The Sea Office is quite a small co-living space but that’s not necessarily a bad thing. You’ll have plenty of opportunities to get to know the other residents, whether that’s from working together in the co-working space or relaxing in the lounge and garden.

Workup is a coworking space in the North of Lisbon that also has a few basic rooms for rent (these can be seen on Airbnb).

While the rooms are very basic, particularly when compared to spaces like Outsite, the coworking space itself is very well-equipped. Amenities included in your coworking pass include access to a gym, tennis courts, swimming pool, and recording studio.

Because of its location, this isn’t a particularly well-known coworking space within Lisbon. If you’re looking for somewhere cheap to stay, however, and want access to facilities like a gym as well as your co-working space, then it could be an option to consider.

If you decide not to try co-living, but would like to co-work, be sure to take a look at the guide to the different co-working spaces in Lisbon.

Co-Living in The Algarve 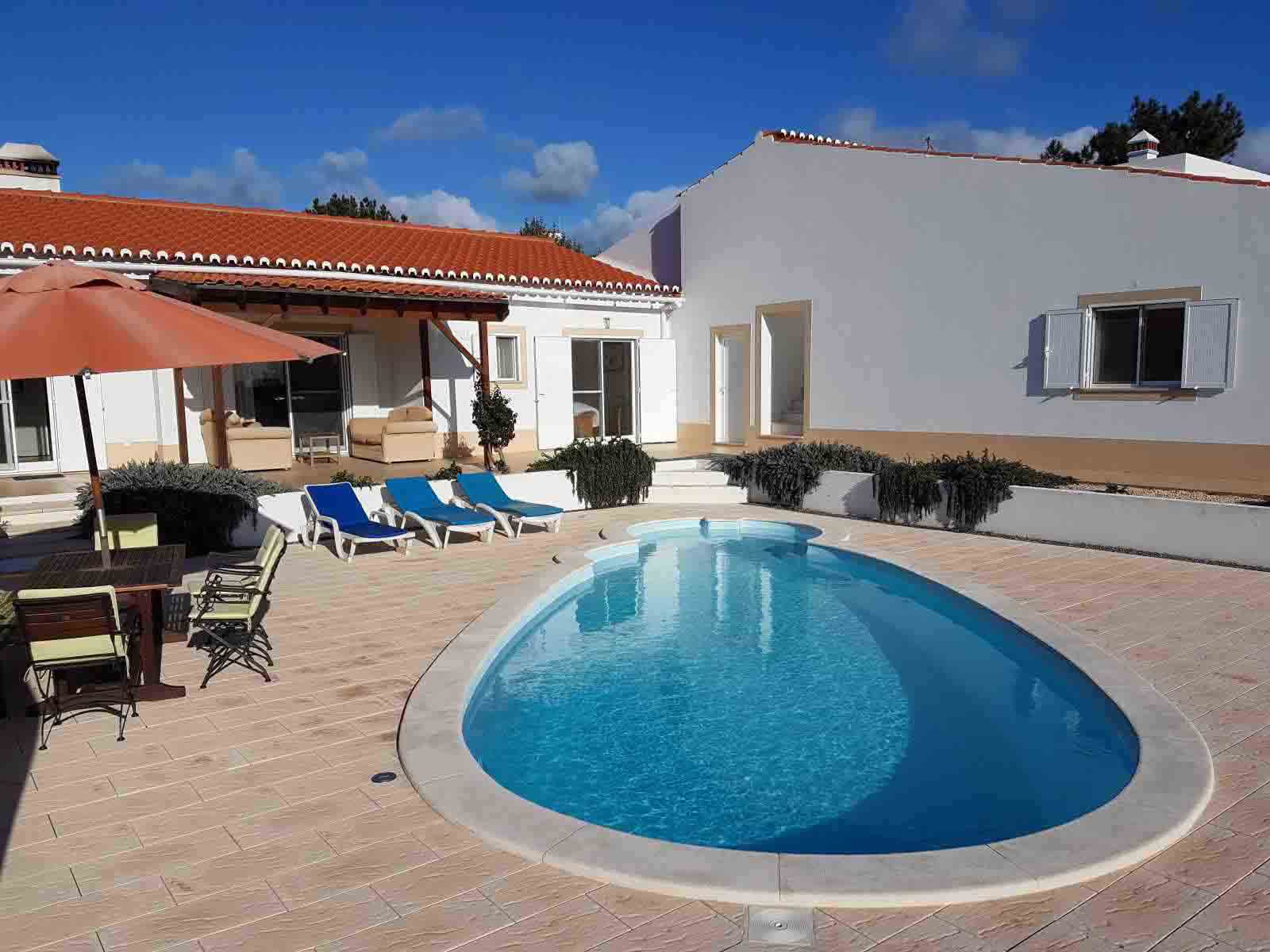 If you’re looking for a workcation where you can get away from it all, this could be the perfect space for you.

Stokeworks is situated on the Western Algarve, surrounded by a natural park (Parque Natural do Sudoeste Alentejano e Costa Vicentina). The nearest town is the small town of Aljezur, and after that there are only small villages nearby.

As well as the beautiful surrounding landscape, this part of Portugal is known for its great surf. You can easily hire surfboards, or take a few lessons if you don’t know what you’re doing yet. During the cooler months, it’s also a great hub for walking.

The coworking space includes a pool, BBQ, coworking area, and a fully-equipped kitchen. Prices start from €206 per week, per person with discounts for stays of more than 2 weeks (10%) and 30 days (20%).

Coworksurf operate several co-living spaces around the world including two in Portugal: 1 in Sagres in the Algarve and the other in Peniche, around 90 minutes by car from Lisbon. What do these two co-working spaces have in common? Well, they’re both located in two of Portugal’s surfing hotspots.

Coworksurf was started by Nick Mattia and Joe Sharp, two freelancers who fell in love with Portugal and decided that coworking and surfing were two things that just went hand-in-hand. Naturally, the space attracts a lot of serious surfers but it also attracts plenty of newbies and even those that aren’t there to surf as well.

If you’re looking to get some work done, and to explore a part of the Algarve that’s more remote and underdeveloped, this is a coliving space that’s worth taking a look at.

(We have another guide for digital nomads visiting the Algarve, which includes more information about finding accommodation, coworking spaces, and meetups.)

Co-living in The Azores

Situated on the Azorean island of São Miguel in the middle of the Atlantic Ocean, Novovento provides a relaxing environment to work and meet other digital nomads.

Novovento has space for up to 8 people in each of its two dorms, with up to 4 people in each dorm. Breakfast is included in the cost of accommodation, and communal evening meals are also available (for an additional fee). Discounted rates are available for long term stays of 28 days or more.