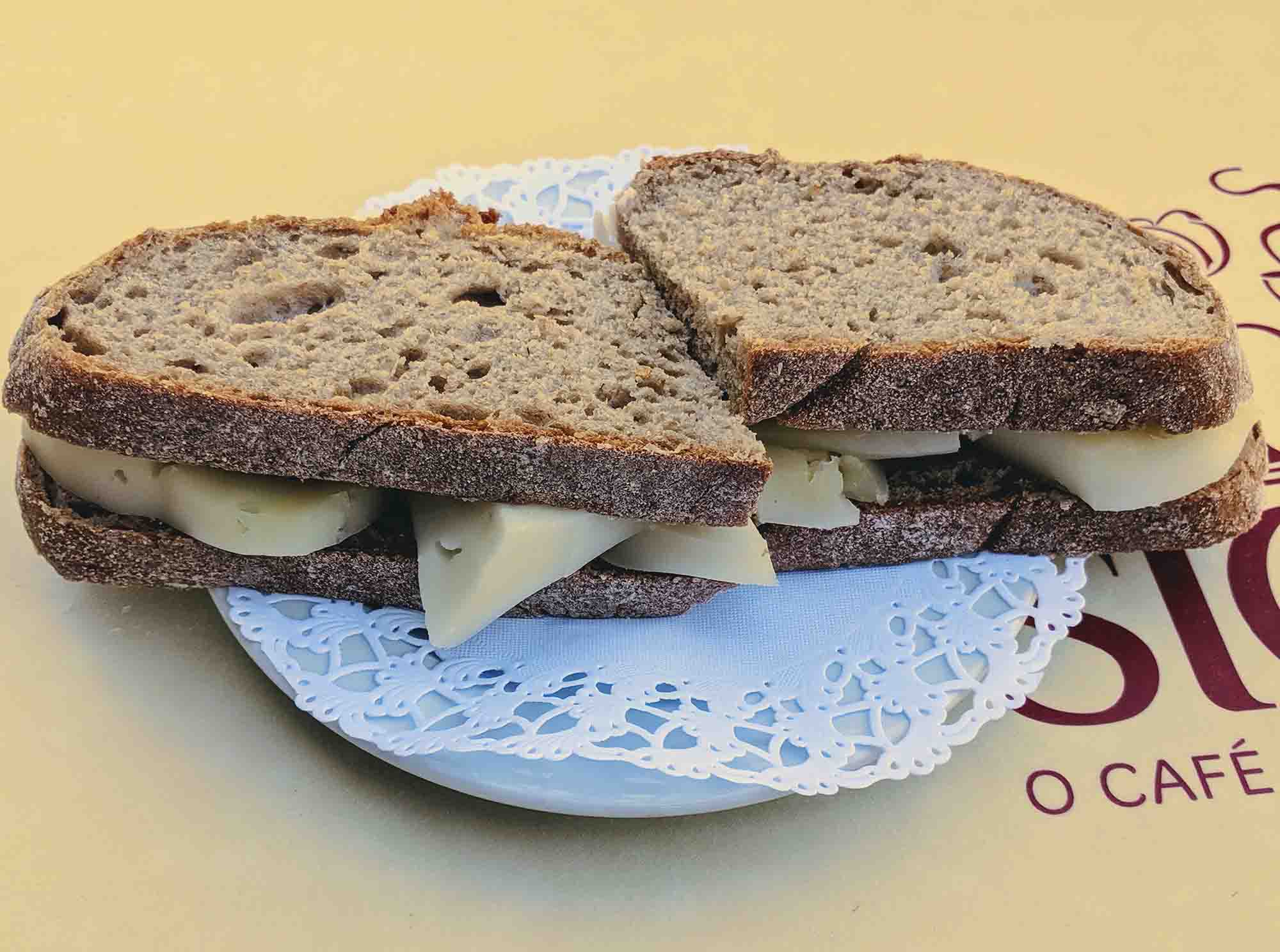 Portugal isn’t a country that you would associate with sandwiches. Sandwich shops aren’t very common and there isn’t much of a “grab and go” food culture like there is in many English-speaking countries.

You’re most likely to come across sandwiches in a café, and every café in Portugal has the same three sandwiches on offer: ham (fiambre), cheese (queijo), or ham and cheese (mista) – and it’s usually the same cheese* and ham in just about every café in the country.

Of course, there are toasted sandwiches as well (again with the ham, cheese, or ham and cheese options), and they’re made with sliced bread rather than bread buns, so I guess that makes six different options.

Given that these are the sandwiches you’re most likely to come across, it would be easy to think that those are the only sandwiches on offer. They aren’t. There are much better sandwiches: you just have to look out for them.

*If you’re in a part of Portugal that produces a regional cheese, the café may use that cheese rather than the sliced queijo flamengo that’s normally used. When I was in Serra da Estrela, for example, I was able to get a sandwich made from the local Serra da Estrela cheese and, on the island of São Jorge in the Azores, the sandwich was made from the local São Jorge cheese.

I think the bifana is Portugal’s best sandwich, especially if it’s done in the Porto style (bifana a moda do Porto) as opposed to bifanas à moda de Vendas Novas, the style most common in the south of Portugal. It’s a simple sandwich, but that’s what’s good about it as well. Simple but reliable.

Of course, people from the south of Portugal, and especially from Vendas Novas, would probably argue that the Vendas Novas style is better. Both are good: I just have a preference for the Northern Portuguese style.

The bifana is made from thin strips of marinated pork that’s served in a simple white bread roll. In Porto, the bifana comes with a sauce while in Vendas Novas and most of the South of Portugal it’s typical to put squeezy yellow mustard on top.

I don’t think it’s as good as the bifanas from continental Portugal, but it’s novel enough that it’s worth looking out for.

The sande de leitão or leitão sandwich is something that you’ll mainly find around Coimbra, Porto, and especially Mealhada where you’ll find the highest concentration of leitão restaurants anywhere in Portugal.

Leitão is one of the 7 gastronomic wonders of Portugal, an award that looked at the best Portuguese dishes around the country, so this is a sandwich to look out for. Leitão translates as piglet or suckling pig, which means this is a young pig – so young that it should still be suckling. The meat is fatty and incredibly delicious and, although it does sound like a slightly barbaric dish, it’s also an incredibly delicious one.

It makes for a great sandwich as well – maybe even Portugal’s best sandwich. I’m torn between this and the bifana. 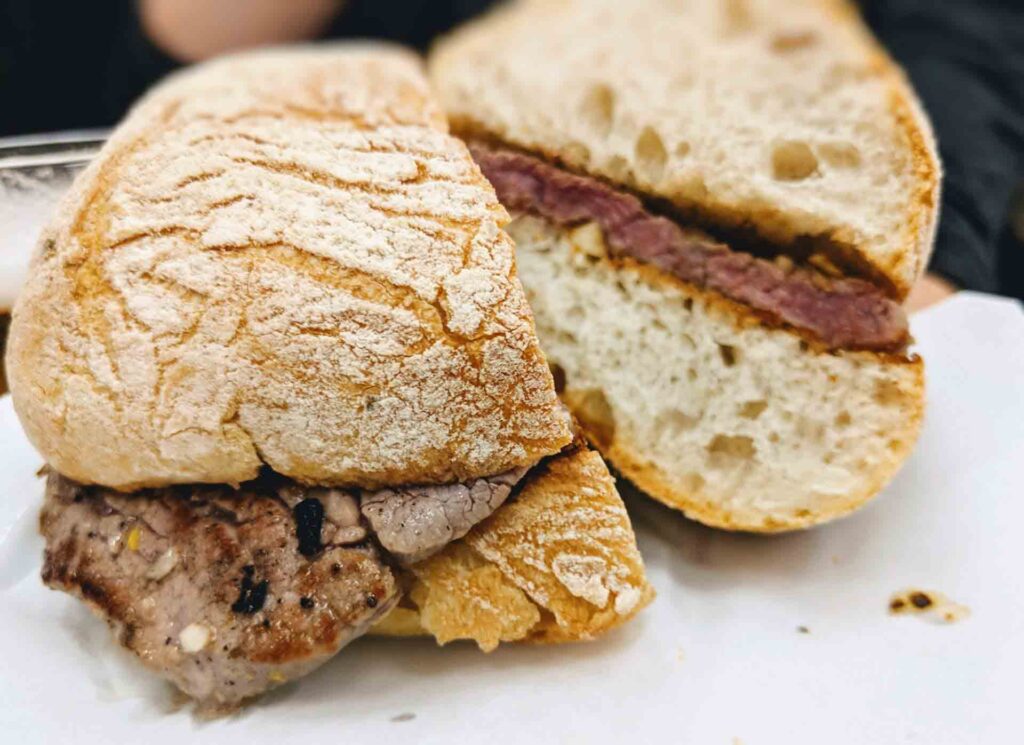 Along with the bifana, the prego is a beef sandwich that you can get in cafés all over Portugal. Prego is the Portuguese for nail, and it’s called a “nail” because of the little nail-like bits of garlic are pounded (or nailed) into the steak with a mallet.

You’ll get an opportunity to try a prego if you go for seafood at a marisqueira in Lisbon. For some reason, it’s typical to finish a meal of crab, tiger prawns, oysters, and whatever else you decide to eat, with a prego – squeezy mustard and all.

Otherwise, you’ll also find pregos on menus in most cafés around Portugal.

Although pernil (roast pork leg) as a dish is served throughout Portugal, the sande de pernil can be a bit elusive. It seems to be mainly found in the North of Portugal, and even then it’s still quite hard to find. The best place to find this sandwich is in Porto. It’s famously served at Casa Guedes, but Casa Guedes definitely isn’t the only place in Porto that serves it.

The sande de pernil is often served with cheese, serra da estrela cheese specifically, but you can get it without as well. If you’re travelling in or around Porto, be sure to look out for it.

The francesinha is easily Portugal’s most famous sandwich, but is it the best? People from Porto, where the sandwich originates from, would argue yes but that’s not to say that this sandwich doesn’t have its fans in the rest of Portugal as well. It definitely does. I’ve just never become one of them.

This sandwich is made from ham, sausage, steak, melted cheese. All of that is put between thick slices of bread, topped with melted cheese, and then covered in a beer sauce and served with french fries. If you get a francesinha especial, there’s a fried egg on top as well.

I’ve tried francesinhas several times. I’ve had them in Porto and I’ve had them outside of Porto. I’ve gone to the places that are considered the “best” and I’ve had gone with Portuguese people to these cafés and we’ve both left with differing opinions: to them it was a culinary masterpiece and to me it was just okay. Unusual, bizarre even, but from a taste point of view: just okay.

It’s something that you should try once, especially if you’re visiting Porto but, personally, I would prioritise some of these other sandwiches ahead of the francesinha. That’s just me, though.