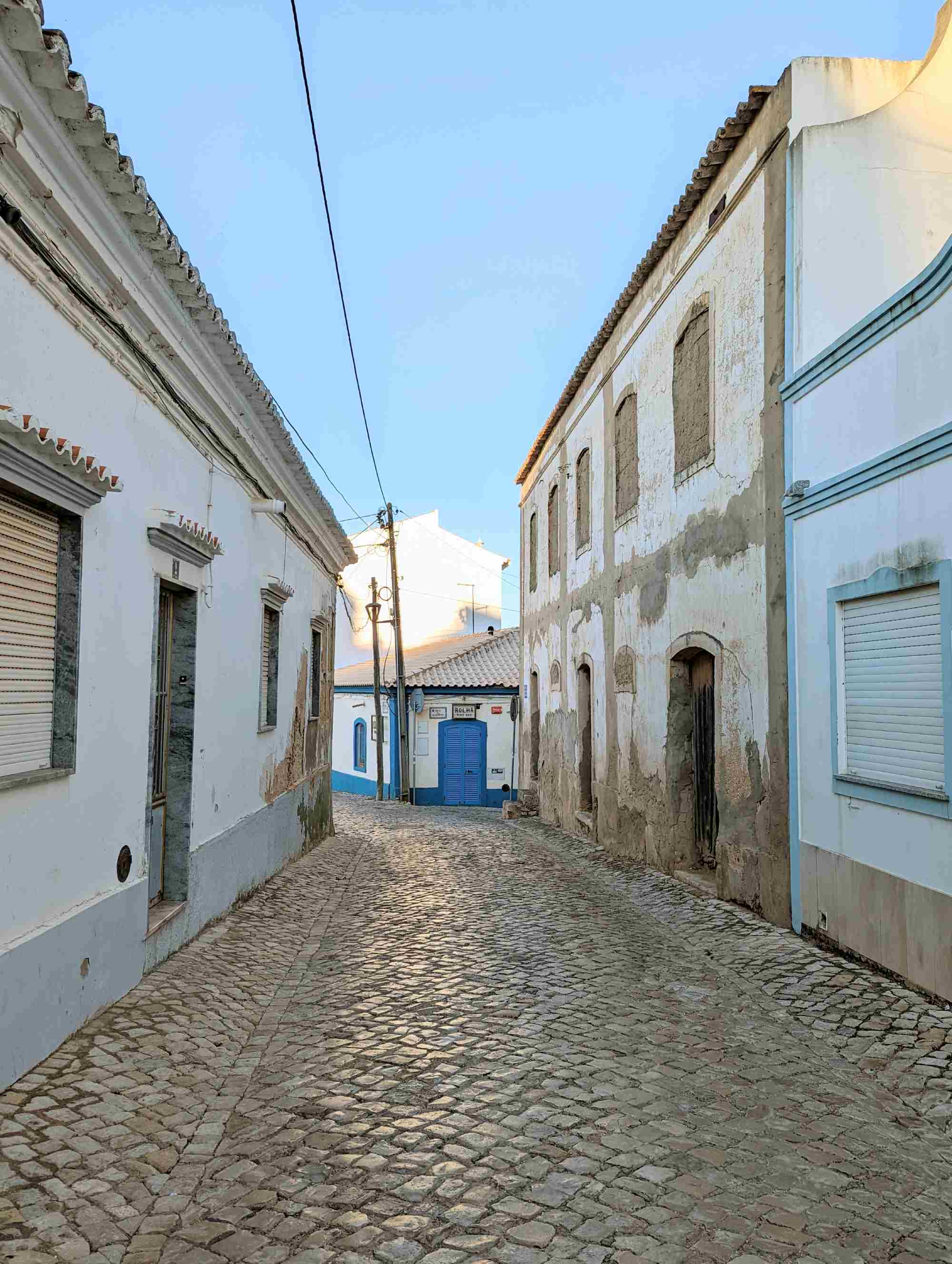 A typical street in Portugal

Portugal is an incredibly hilly country (Lisbon, like Rome, is said to be built on seven hills, for example) with lots of narrow, cobbled streets. While this can be charming to look at, it’s not particularly appealing for those who are older or who have mobility issues.

Thankfully, there are a few places that are a little flatter and more suited to those that want to avoid the hills. You can also live in Lisbon and Porto if you choose to live in specific neighbourhoods: Porto’s Matosinhos neighbourhood is very flat as is Lisbon’s Parque das Nações. However, you will find other parts of Lisbon and Porto much more difficult so this option may be very limiting and you may be better off considering one of the options below.

This list is far from exhaustive, but features some places that are popular with expats.

Situated next to the Spanish-Portuguese border in the far east of the Algarve, the small town of Vila Real de Santo António is a popular destination for those with mobility issues. Although cobbled throughout, the charming town is incredibly flat. It’s not quite on the beach, but it’s just a short drive (or walk) from nearby beaches like Praia de Santo António and Praia de Monte Gordo.

Tavira isn’t quite as flat as Vila Real de Santo António, but it is definitely one of the flatter towns in the Algarve. With its Roman bridge, castle, and ferry access to nearby beaches, it’s a town that’s on a lot of expats’ radars – not just those with mobility problems. The downside to Tavira and a lot of the Eastern Algarve is that getting to the beach isn’t as easy, and if that’s an issue you may want to consider Vila Real de Santo António or a Central Algarve town like Praia da Rocha or Armação de Pêra.

Praia da Rocha is a holiday resort town near the Algarve city of Portimão. It attracts holidaymakers from all over Europe, but especially the Algarve, as seen by the large number of Irish bars in the town. It’s incredibly flat, however, while it may be ideal for a holiday, it may not be ideal for living due to the fact that most of the larger supermarkets are at least 2 km away from Praia da Rocha.

Although Armação is another popular holiday destination, it is more popular with Portuguese holidaymakers, which may make it more appealing to those looking for a more authentic taste of Portugal. The town is known for its wide, flat boardwalk, which runs alongside the beach through most of the town. The streets behind aren’t as wide, unfortunately, but are generally quite flat.

For those considering somewhere a little further inland, look no further than São Brás de Alportel. Situated north of Faro and just a short drive from Loulé, this town is incredibly flat and a popular consideration for those with mobility issues. It may not have the historical attractions that Tavira and nearby Faro have, but São Brás de Alportel makes up for it by being very typically Portuguese and less touristy than the nearby coast.

Situated just outside of Lisbon, the coastal town of Costa da Caparica is known for its long beach and accompanying boardwalk. Although the town has always been popular with holidaymakers, over the past few years it has grown in popularity as more and more people have left cities like Lisbon and Porto to work remotely. The town is quite flat and in sections the pedestrianised areas are quite wide. However, as always in Portugal, many pavements can be narrow.

Setúbal is becoming an increasingly popular place to move to in Portugal. Situated around an hour’s drive from Lisbon, the small, picturesque city benefits from the warm weather that Lisbon gets but with much flatter streets and a lower cost of living. Setúbal’s location is ideal for those that want proximity to a large city like Lisbon, without being in it. It’s also just a short drive from the Algarve where you can visit some of the other accessible towns and cities mentioned in this article.

While the area surrounding Reguengos de Monsaraz isn’t particularly accessible, the town itself is quite flat. Situated close to the Spanish-Portuguese border in the heart of the Alentejo region, living here offers an experience of rural Portugal while also having all of the benefits of Spain on your doorstep. Reguengos is situated around 35 minutes by car from Évora, a small city famous for its historical attractions.

Espinho is a small coastal city that’s situated roughly 30 km south of Porto. Living here means slightly cooler weather than the Algarve, particularly during winter, but this may be a selling point if you’re not a fan of high temperatures. With fairly wide and, most importantly, flat streets, Espinho is a worthy consideration for cyclists, those with mobility issues, or those that are just looking to avoid the hills Portugal is known for.

Do you know anywhere else in Portugal that isn’t particularly hilly? Share your suggestions in the comments section below.