Skip to content
Portugalist > Latest Articles > Living in Portugal > Visas & Residency > The D7, the Golden Visa, or the D2: Which Is Right For You? 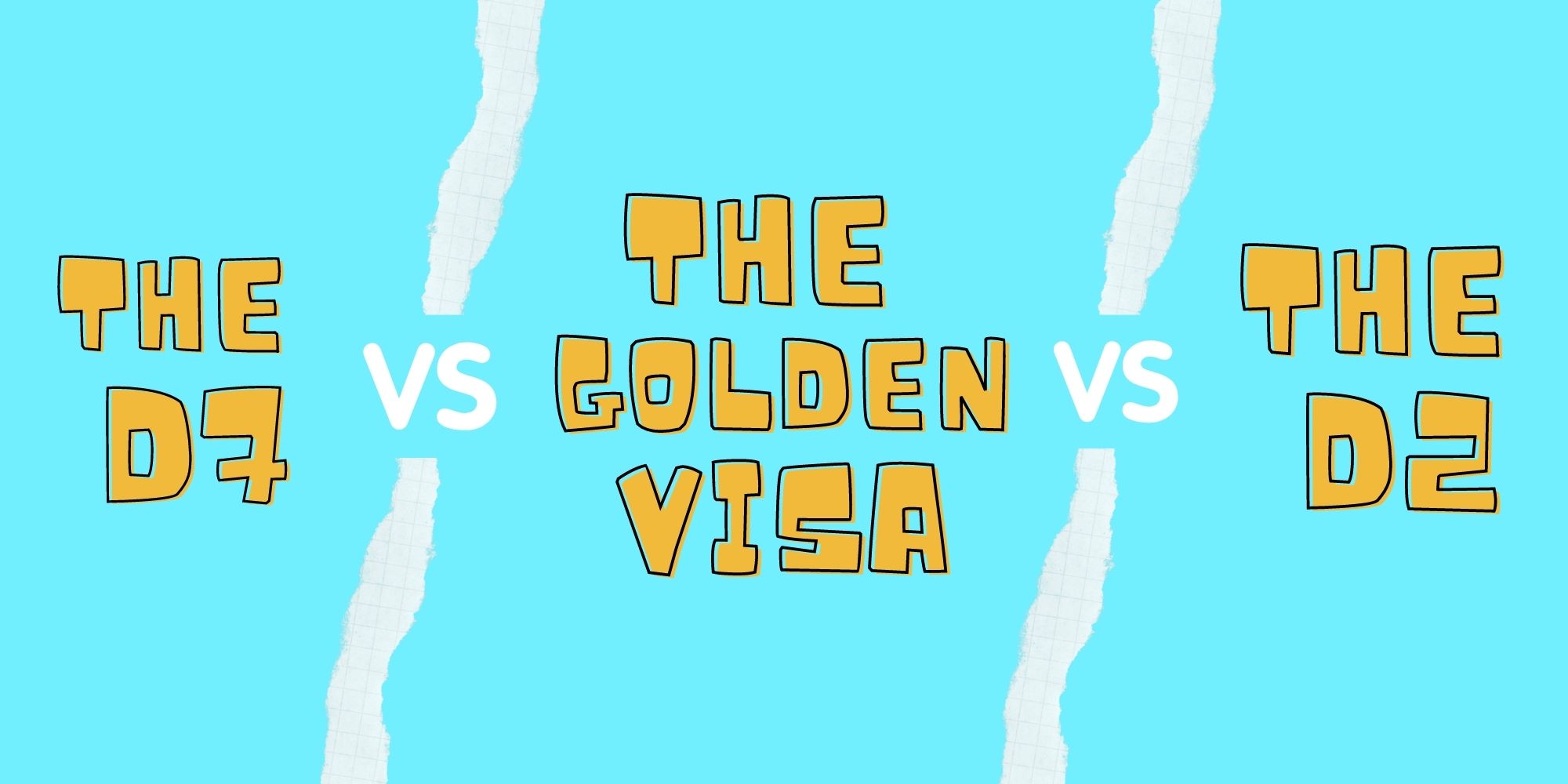 You might have heard of the golden visa, the D7, and the D2. But what’s the difference? Are they the same as the retirement visa or the passive income visa? And most importantly, which one is right for you?

Portugal offers a number of different residency visas which allows those from outside of the EU to move to Portugal. These visas are aimed at different types of people, including those that have money to invest in something like a property and those that may not have a sum of cash to invest but have a regular income from a pension or other source of funding. Then there are the visas aimed at entrepreneurs or small business owners who want to open up shop in Portugal.

Understanding which visa is best for you can be confusing, but this article will explain the best visa from you, depending on your finances and plans for living in Portugal. For most people, this will either be the D7 or the golden visa so let’s start with those.

If any of those sound like you, read on.

There are a number of ways that you can invest in the golden visa. Some of the most common are:

The downsides of the golden visa are the visa fees, which are typically €10,000-€15,000 per person, and so may be out of the budget of many people. For those thinking of purchasing a residential property, the 2022 rule changes now mean that properties in many appealing parts of Portugal no longer qualify (including Lisbon, Porto, and most of coastal Portugal).

The D7 is ideal for the following types of people:

The D7 is aimed at those that have their own income. It’s often called the passive income visa, but has also been referred to as the retirement visa and freelancer visa as well. It’s aimed at those that have a regular form of income, such as a pension or a salary from a remote job. Some people with savings have successfully obtained the D7, but those with regular income are more successful than those with a lump sum of cash.

How much income do you need? Officially, you only need to have more than the Portuguese minimum wage (around €700 per month) but in reality you want to be able to show that you can support yourself and any dependents. The amount needed will vary depending on where you live in Portugal with large cities like Lisbon more expensive than rural parts of Portugal.

The following are some of the most commonly accepted income types:

This visa typically works out cheaper than the golden visa, especially if you’re bringing other family members.

There are a few downsides to the D7. The main one is the time you need to spend each year in Portugal (around 8 months), which isn’t ideal for those that want to travel or split their time between two countries equally. Another challenge is the income requirement as some people have cash, but don’t have a regular income. In this instance, the golden visa may be the better option.

Obtaining the D7 can be a lot of work. One of the biggest challenges is that many applicants are being asked to have an address in Portugal at the application stage. Typically, this means they have to come to Portugal and find a property to rent in advance or even rent a property sight unseen. Of course, you also have the option of buying a property either.

Read more about the D7 here.

The D2 (sometimes called the entrepreneur or freelancer visa) is aimed at those who want to start a business in Portugal or relocate an existing business here. It’s also common among freelancers or independent service providers, although many are able to apply for the D7 instead and lawyers often recommend that they apply for the D7 rather than the D2.

Ultimately, this visa isn’t for everyone. However, if you don’t qualify for the D7 or you’re a keen entrepreneur who’s spotted an opportunity in Portugal, this could be your ticket to moving there. The visa doesn’t have a minimum investment amount, unlike entrepreneurial visas from other countries, so if you can prove (through a business plan) that you can make your business a success with minimal capital, it could be a cheap way to start a business in an EU country.

The main downside to this business is that it requires you to start a business in Portugal or transfer one here. This is no small undertaking and it shouldn’t be taken lightly.

Read more about the D2 here.