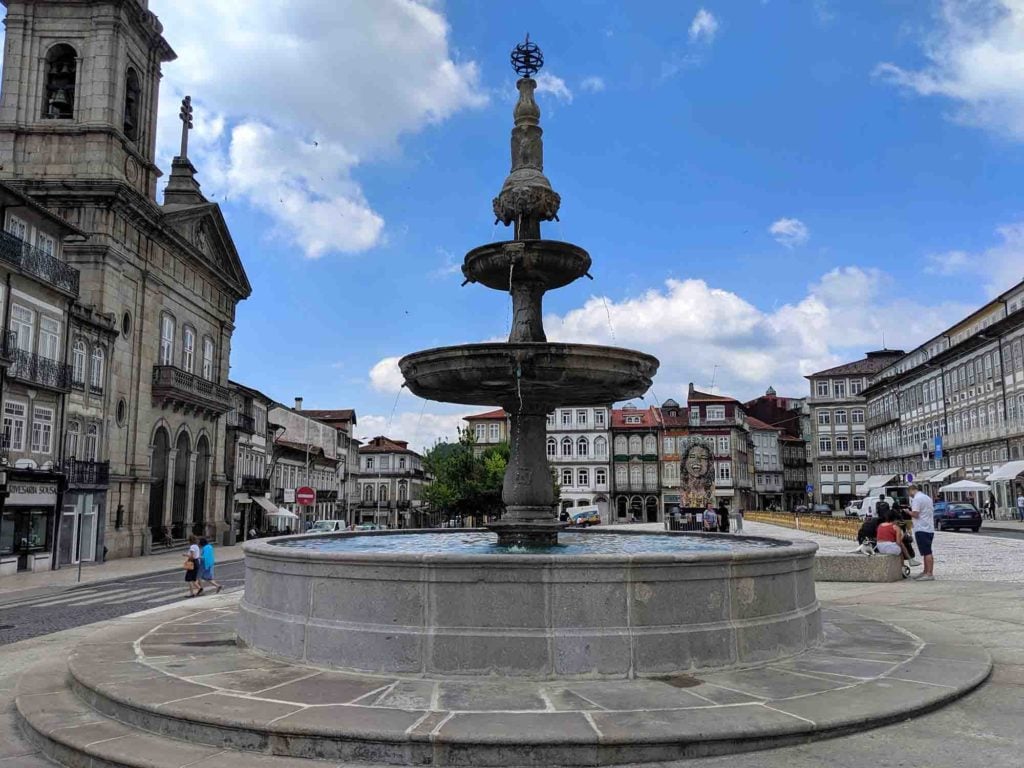 Guimarães is home to several attractions, the most famous of which are Guimarães Castle, the Palace of the Dukes of Braganza, and the Penha Sanctuary. It has a mix of beautiful architecture, some of which is made up of wooden-framed houses that look like something you’d find in Central Europe, and the city is extremely compact and walkable.

Some typical dishes that you’ll see on restaurant menus in Guimarães include cabrito assado (roast kid goat), Arroz de pica no chão (rice cooked in rabbit or chicken blood), rojões (fried fatty cubes of pork with potatoes), bacalhau assado (roast bacalhau), sopa de nabos (turnip soup), and vitela assada (roast veal). Some of these are specific to Guimarães, but many are common across the whole of The Minho and Northern Portugal.

There are also regional sweets and cakes, such as the Torta De Guimarães. The recipe for this cake uses several common Portuguese ingredients to create something unique. These ingredients include sugar, egg yolks, ground almonds, and a type of squash called “chila” or “gila.” The pastry is covered in a syrup, which gives it its crunchy texture.

Trying the local wine is also recommended, and it’s especially recommended in Guimarães where one of those local wines is Vinho Verde. Vinho Verde or “green wine” is a low alcohol white wine that has a slight spritz to it (normally 8.5% to 11%). Many people say that the wine doesn’t travel well, even to other parts of Portugal, so the best place to try it is here in the region itself.

Guimarães City Centre is extremely walkable, and you shouldn’t need to worry about getting buses or other forms of transportation while you’re visiting. The only exception is the Penha Sanctuary, which is situated up a steep hill. Don’t worry: there’s a cable car if you didn’t remember to bring your walking boots!

Guimarães has good public transport, with both a train and a bus station and good connections to Porto. The Urban train ticket from Porto is normally cheaper than a bus ticket, but the bus is usually slightly faster (by around 10-15 minutes). It can also be booked in advance, and is typically a lot less crowded than the train.