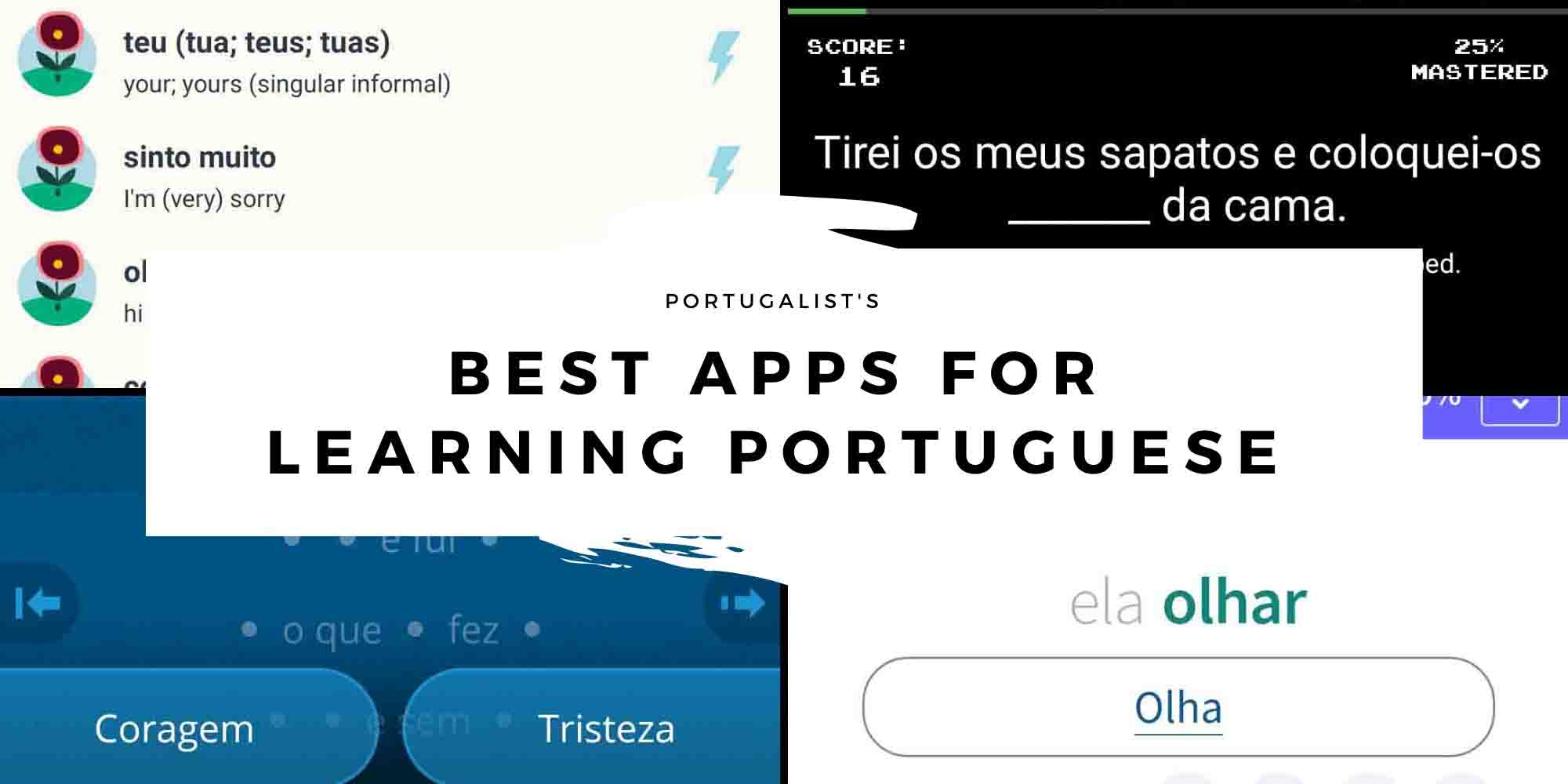 There’s an app for just about everything, and many of them are helpful for learning Portuguese.

Each app has its own purpose, whether it’s learning vocab or practicing speaking, and this list will highlight a few of the best ones to download to your phone.

Joel and Rui, the guys behind Practice Portuguese, have created an app to compliment their language learning platform. If you have a Practice Portuguese membership (and Portugalist readers pay less), you can sign in to the app and take full advantage of all its features.

The app is useful for learning Portuguese on the go (for example, when you’re commuting or just have ten minutes to spare). There’s a verb section, which contains common verbs and their conjugations as well as audio pronunciation for each word. You can also listen to audio clips from the audio ‘shorties’, just as with the website, and see translations of the vocabulary and expressions used in the audio.

One of the most useful features is the Smart Review. This allows you to create an audio file of all the words and phrases that you didn’t know and have saved for later. You can then listen to this file while driving, on the bus, at the gym, or wherever else you want to practice your Portuguese.

Linguno is a very comprehensive web app that covers Portuguese from Portugal and Brazil, and you can select which you’re studying when you create your profile.

While many apps only cover one area of language learning (for example: vocab), Linguno covers several. You can use it to learn new words, practice conjugating verbs, or practice listening.

There are lots of benefits to Linguno, but the areas that people will probably find most useful are the listening games and the verb conjugation games as its hard to find other apps that offer listening and grammar exercises.

Linguno is available at Linguno.com. The site also works well on mobile. Read a more detailed writeup of Linguno here.

Hellotalk is an app where you can talk with other language learners, either by text or by voice.

You enter the language you’re learning and the language you’re fluent in, and then you can search for other language learners. Portuguese speakers have either a Brazilian or a Portuguese flag next to their profile, which is really helpful for distinguishing between the two. Simply leave a message (either text or audio) for someone that you feel like you’d like to speak to and away you go.

Where HelloTalk is really useful is that you can start speaking to people by texting rather than out loud. This is a really helpful stepping stone when you’re just starting out. Once you feel a bit more confident, you can progress to audio. Or not.

And, another great thing about HelloTalk is that it allows users to correct each other’s mistakes. That’s a huge help.

Available for Android, iOS, and web (although you need to download either the Android or iOS app for the web version to work).

Clozemaster is a gamified learning app that’s a little different than other language learning apps like Duolingo and Drops, not least in its retro video game design.

This app pulls in thousands of sample sentences from the open source tatoeba database, sentences for example eu estava com ele (I was with him), and removes a word (e.g. eu ___ com ele to create a little game. Your job is to guess the missing word and, by doing this, learn new words in context.

The Fluency Fast Track Module contains over 18,000 words so, by the end of this game, you would have an incredible vocabulary. You can also work through smaller modules like the 100 most common words, or you could focus on grammar challenges like prepositions, pronouns, or irregular verbs.

The key here is that the sentences are in context, unlike many other language apps which often focus on learning words in isolation. And, unlike other apps like Duolingo and Drops, you don’t really have to start in the shallow end and learn the word for duck or apple this app: you’ll be starting with reasonably complex sentences.

The app is definitely fantastic, but it’s not without its faults. Firstly, the sentences tend to be more Brazilian Portuguese than European Portuguese and there’s no distinction between the two.

Secondly, using a database of sentences that have been translated by amateurs does mean that some sentences could have mistakes.

Available for Android, iOS, and web.

Memrise is a spaced-repetition flashcard app that’s similar to other language learning apps like Duolingo, Drops, and Anki.

You can create your own flashcards or you can search for some of the flashcards that other people have made, and you’ll find both European and Brazilian Portuguese flashcards. As these are created by other users, the quality of each course can vary, but there’s definitely some great content on there – particularly the content created by the Memrise team.

And, because it’s so useful for creating flashcards, you’ll find the cards for many language courses on there.

It’s a useful app for learning phrases and vocab but, rather than learning words at random, it’s biggest use is in creating flashcards of new words and phrases that you want to commit to memory.

Serial language learners will argue that Anki is better, but Memrise is definitely more user-friendly and, when you’re just starting out, that’s definitely a big plus point for Memrise.

Available for Android, iOS, and web. Read reviews of Memrise from other language learners.

Conjuguemos is a web which gamifies verb learning. Simply decide which tense you wish to work on, and Conjuguemos will test you on your ability to conjugate verbs in that tense.

It’s much more fun than learning verb tables and, like any of the other flashcard apps, it’s something you can easily do when you have a few minutes spare.

Unfortunately this app is only available as a web app, which means you have to play it in your browser. It’s still possible to do this on your phone as well as your computer.

Lyrics Training is an app where you listen to music (Portuguese music in this case) and then try and guess the missing lyrics. It’s a fun way to practice your listening skills, and also to learn a little bit more about Portuguese music and some of the bands and artists that are popular.

You can listen to both Portuguese and Brazilian artists, and you’ll probably stumble upon quite a few songs that you already know.

The only downside to this app is that that it only gives you 3 free minutes every 30 minutes (you can pay to get unlimited access). The web version doesn’t have this limitation, thankfully.

Available for iOS, Android, and Web.