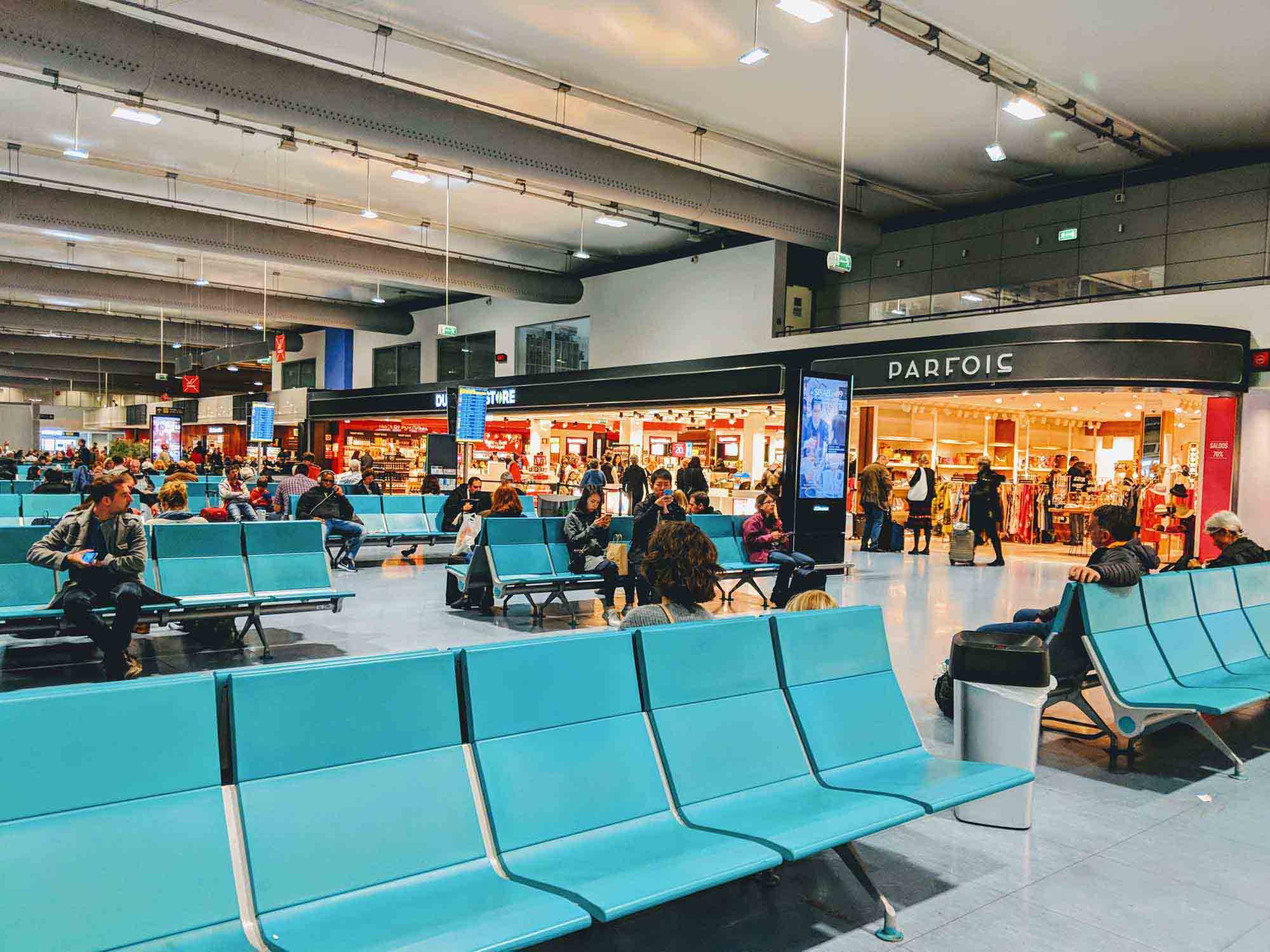 Lisbon Airport’s Terminal 2 is essentially a giant shed that was originally built to cater for domestic flights, but now focuses on the increasing number of low-cost flights from airlines like Ryanair, Easyjet, and Wizz Air.

There are very few shops, cafés, or restaurants, and only a limited number of toilets and other facilities. As it’s not the most exciting place to spend a few hours, you’ll ideally want to spend as little time here as possible. Of course, if your flight leaves from here, you’ll have to spend some time here and this guide will hopefully help you to make the most of your time here.

Although the metro line runs as far as Lisbon Airport, it only runs to Terminal 1. If you are travelling to the airport by metro, you’ll need to take the metro to Terminal 1 and then take the shuttle to Terminal 2. This shuttle leaves every 10 minutes from outside the departures area, and the journey only takes a few minutes.

Unlike the metro, the Aerobus does stop at Terminal 2. This bus stops at key locations throughout Lisbon including Praça do Comércio, Cais do Sodré, and Avenida da Liberdade, before stopping at both Terminal 1 and Terminal 2. Wi-Fi is available onboard along with USB charging sockets.

If you’re heading to the airport by taxi or airport transfer, you can go directly to Terminal 2. Most of the taxi apps (Uber, Bolt, etc) don’t let you specify Terminal 2, so be sure to let your driver know that’s where you’re headed.

The only way to get between Terminal 1 and Terminal 2 is by shuttle bus, which means there’s no internal transfer system for onward flights. If you have to take another flight, you’ll need to take the shuttle bus from outside the departures section of either Terminal 1 or 2. Unfortunately, this also means that you’ll have to go through security (and, depending on where you’re flying to, passport control) again.

Terminal 2 is definitely not somewhere where you want to spend a lot of time as there’s not a lot to do and there often seems to be a lack of seating (especially seating that’s not tied to a restaurant or café).

Pre-security Terminal 1 is by no means fantastic, but it’s a lot more interesting than Terminal 2. If you have a lot of time to kill at the airport, you’re better off spending it here and then getting the shuttle bus.

You could also consider dropping your bags and heading out of the airport (there’s a left luggage service in Terminal 1 next to car park P2). Either head into Lisbon City Centre or to the nearby Parque das Nações neighbourhood, which has an Oceanarium and the Vasco da Gama Shopping Center. Both are accessible by metro, but a taxi or Uber will be much quicker.

Alternatively, you could consider taking one of the sightseeing buses. Both the City Sightseeing bus company and the Yellow Bus company stop at the airport.

If your flight is with a budget airline like Ryanair, Easyjet, or Wizz Air, you’ll more than likely be landing at T2. Once you land, you’ll then get on a bus which will take you to Terminal 1 where you can collect your bags and exit the airport.

There are a small number of places to eat in Terminal 2: Servejaria, McDonald’s, Soho Coffee Co., and a Tasty2Go which just serves drinks and sandwiches. Food is expensive here (a sandwich costs around €7 on average), so it’s definitely a good idea to eat beforehand.

Terminal 2 is definitely not a shopper’s paradise. Along with the obligatory duty free shop, there are only a handful of other shops in T2 including an Ale Hop, Parfois, and a Sunglass Hut.

Working from airports isn’t always easy, especially when so many restaurants and cafés don’t have plug sockets that are easily accessible. This is definitely the case in T2 at Lisbon Airport, where plug sockets and clean, comfortable seats and tables are few and far between.

The best place to work seems to be in the Tasty2Go seating area, opposite the passport control, as many of the seats against the wall have plug sockets nearby.

Unfortunately, there’s no business lounge in Terminal 2. The lounges in Terminal 1 are all through security.

If you’re flying to a country that’s outside of the Schengen Zone like the UK or Ireland, you’ll need to go through passport control and into a separate holding area. Aside from toilets, this area has no facilities and often very little seating so don’t rush in there as soon as you get to Terminal 2. That said, there are often queues to go through passport control and it can often take 20 minutes or more to get inside.

Looking to stay as close to the airport as possible? Read the guide on the best hotels near Lisbon Airport.