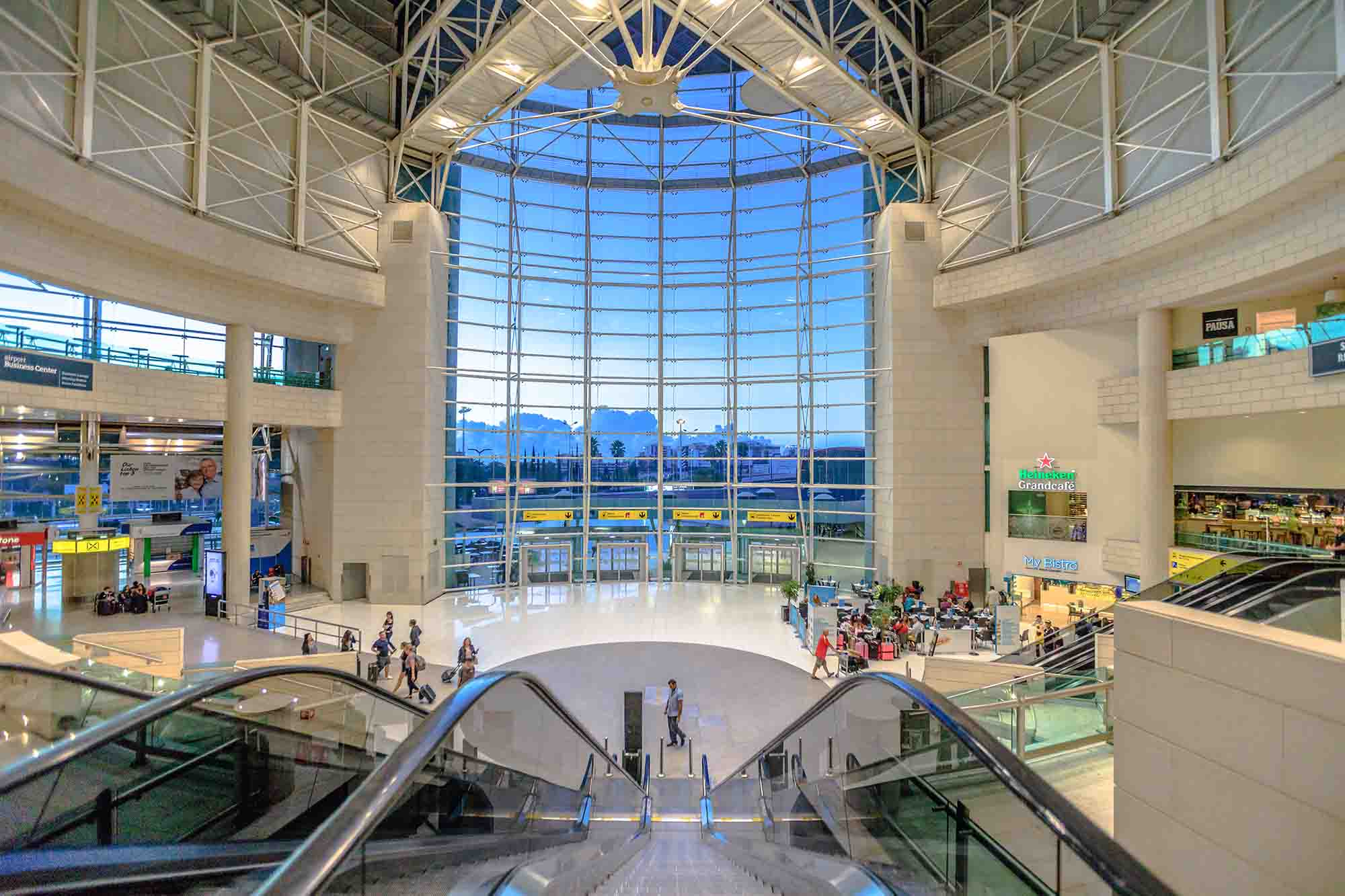 Lisbon Airport is Portugal’s biggest airport, and most people visiting Portugal fly into here. It’s situated just outside of Lisbon City Centre, and getting to and from the airport is easy thanks to all the different transportation options – metro, taxis, Ubers, and everything else.

The airport consists of two terminals: Terminal 1 and Terminal 2. Terminal 1, the main airport, is where you’ll be flying from if you’re not flying with a budget airline like Ryanair, Easyjet, Wizz Air. It’s a nice terminal with some good airport shopping, food courts, and several airport lounges. All of this is overpriced, of course, but isn’t that the case with every airport?

Terminal 2, on the other hand, is essentially just a large shed. It has very little seating and very little in the way of facilities. Hopefully, you’re flying from Terminal 1.

Besides all of the expected facilities and amenities like toilets and duty free shopping, The following area a few of the most useful facilities that you’ll find at Lisbon Airport.

The following airport lounges are available at Lisbon Airport (Terminal 1).

The ANA Lounge is the main airport lounge at Lisbon Airport. It offers panoramic views of the runway, showers, free wifi, and food and drink.

Lounge passes can be purchased from loungepass.com or at the reception. Priority Pass and Dragon Pass are accepted.

Although more basic than the ANA Lounge, the Blue Lounge offers airport lounge essentials like food and drink, magazines, and free wifi.

Lounge passes can be purchased from loungepass.com or at the reception. Priority Pass is accepted.

The TAP Premium Lounge aims to be the best lounge at Lisbon Airport. As well as food and drinks, it provides showers, a children’s play area, a nap area, and free wifi.

TAP premium passengers, Victoria Gold, and Star Alliance Gold get free access to the lounge. Depending on your ticket, you may also be able to purchase access.

Note: There are no airport lounges in Terminal 2.

There is a luggage storage facility in Arrivals at Terminal 1. It is situated before security, and next to carpark P2 (near the Starbucks). The facility is open 24 hours per day, 7 days per week, and you can storage items – anything from handbags to surfboards and bicycles – for as long as you like.

When you leave your stuff, you pay for one day and take a receipt. Then, when you return, you pay the remainder. This works especially well for those that don’t know have fixed plans and aren’t sure how long they’ll need luggage storage for.

More information can be found on Lisbon Airport’s website.

Although Lisbon Airport, like many airports in Portugal, is now filled with Euronet ATMs (which charge fees to withdraw money) there are also still some ATMs from Portuguese and international banks that won’t charge you withdrawal fees – you just have to look a little harder now.

Getting from Lisbon Airport to Lisbon City Centre

Although there are many different ways to get from Lisbon Airport to Lisbon City Centre, most people either take the metro or a taxi (or a taxi app like Uber/Kapten/etc).

Lisbon’s metro will take you to the city centre in around 30 minutes. If you’re going into the city centre, you will probably need to change once (for most people this is at Alameda where you switch from the Red Line to the Green Line).

Although it depends on where your accommodation is located, most people usually get off at either Rossio or Baixa-Chiado.

The metro currently costs €1.50. You will need a rechargeable cardboard metro card, which you can also purchase from the machines (costs €0.50).

Tip: if you want to prebook a taxi, consider booking an airport transfer (see below).

Uber and other taxi apps are available at Lisbon Airport. There’s a designated Uber area (which isn’t the same as the normal taxi area), and it’s important to go to the right area otherwise you’ll confuse the driver.

At Lisbon Airport, the Uber (and Taxify, Cabify, etc) pickup area is at the departures area in Terminal 1 near the Kiss & Fly car park. It is not outside the Arrivals area where you would expect it to be. A lot of the apps don’t actually tell you where the pickup area is, and trying to work it out on the map is very confusing.

Tip: Uber isn’t the only taxi app that operates in Lisbon. Most of these taxi apps offer free rides so, if you’ve never used the app before, it’s worth downloading it for your trip to Lisbon.

Other taxi apps that you can use at Lisbon Airport include Kapten, Cabify, Bolt, and Free Now.

If you like the idea of having your taxi pre-booked, and the driver waiting for you when you arrive at Lisbon Airport, booking an airport transfer is the way to go. There’s also the added benefit of knowing exactly how much your trip will cost – including luggage. It’s not the cheapest way to get around, but it’s one of the most convenient.

There are numerous airport transfer companies out there including Welcome Pickups, Rideways.com, and Hoppa.com. Welcome Pickups has great reviews, and they don’t charge for extras like child seats which is why I usually recommend them.

If you’d like to travel in a little more class mydriver.com from Sixt offers a stylish fleet that includes Mercedes-Benz S-Class, BMW 7 Series, and Audi A8 cars.

There is an airport bus at Lisbon Airport, the Aerobus, but it’s not any faster than the Metro. It’s also more expensive than the metro and, according to some of the reviews, less reliable.

You’ll find all the major car rental brands – everyone from Avis to Sixt – at Lisbon Airport. Most major brands have a presence at the car rental section inside Terminal 1, while a few of the budget brands are located offsite.

The best car rental comparison website is RentalCars (in my opinion), and so I always begin my search there.

RentalCars lists all of the main car hire companies like Hertz, Avis, and Europcar, as well as names that you probably haven’t heard before. RentalCars compares all of the companies that operate at Lisbon Airport, and shows you which company offers the best price.

The thing I like about RentalCars is that the reviews that they provide for Europcar, Goldcar, Sixt, etc are for the local branch (i.e. Lisbon Airport) rather than the company as a whole. That’s important because sometimes you come across companies that are good as a whole, but the local branch is bad (and vice versa).

Another good comparison site is Skyscanner, which people normally use for flights but not necessarily for car hire. It pulls in more or less the same results as RentalCars, but sometimes it finds slightly better deals.

Tips: There is a petrol station on the roundabout next to Lisbon Airport but this spiral roundabout is quite confusing and can be a bit stressful, so I normally try and go to another nearby one when I’m returning the car.

Getting to other destinations from Lisbon Airport

If you’re trying to get from Lisbon Airport to another destination by bus or train, you’ll probably need to go to the bus or train station.

The majority of buses go from Lisbon’s Sete Rios station, which you can get to by metro from Lisbon Airport. There’s also a bus station at Oriente, which is closer but doesn’t have as many services. It’s worth checking it, though.

Bus tickets can be purchased from Rede Expressos.

Train tickets can be purchased from CP.pt.

The 3 hotels closest to Lisbon Airport are:

See the full list of hotels near Lisbon Airport.

What to do if you have a layover at Lisbon Airport

If you have a layover at Lisbon Airport, it’s worth making the most of your time and seeing a bit of what Lisbon has to offer. For most people this means going into Central Lisbon and catching a glimpse of the main attractions.

That’s not the only option, of course. You could also head to:

Have bags and suitcases?

If you have bags and suitcases, you can leave them at Lisbon Airport’s luggage storage service. This is located in Arrivals in Terminal 1 before security, and next to carpark P2 (near the Starbucks).

If, for whatever reason, that’s not an option you could also use one of the many luggage storage options in Lisbon City Centre.

Getting into Lisbon City Centre

If you’re on a time limit, it might be worth taking a taxi or an Uber into the city centre (head for somewhere like Praça da Figueira if you’re not sure where to go). Otherwise, there’s the metro.

One other option is to take the City Sightseeing hop on, hop off bus which actually stops at Lisbon Airport.

Getting to Parque das Nações

Parque das Nações is really close to Lisbon Airport: just 3.8 km away. You can easily get there by taxi or by taking the metro to Oriente (typically around 6 minutes on the metro).

Getting to Algés or Costa da Caparica

Algés and Costa da Caparica are both further away, and the best way to get to either is by taxi or Uber. It’s not the only way – you can get to either by public transport or you could even rent a car for the day – but it’s definitely the easiest and fastest way.

The following are just a few of the most frequently asked questions about Lisbon Airport.

How do I get from Terminal 1 to Terminal 2?

There is a free shuttle bus that goes from Terminal 1 to Terminal 2. The shuttle bus runs every 10-20 minutes and the journey takes around 3-5 minutes.

The bus stop for the shuttle bus is well-signposted inside Terminal 1. It is located outside of departures, which you can get to by going up the escalators or stairs which are to the left of the building (when the entrance is behind you).

You can also take a taxi between Terminal 1 and Terminal 2, which some people choose to do if they are travelling with a lot of luggage or are in a rush.

Is there a smoking area inside Lisbon Airport?

There is a smoking lounge in Terminal 1 after security and before immigration control (Next to Gate 21).

There are also smoking areas at two of the airport lounges: the ANA Airport Lounge and the Blue Lounge (both in Terminal 1).