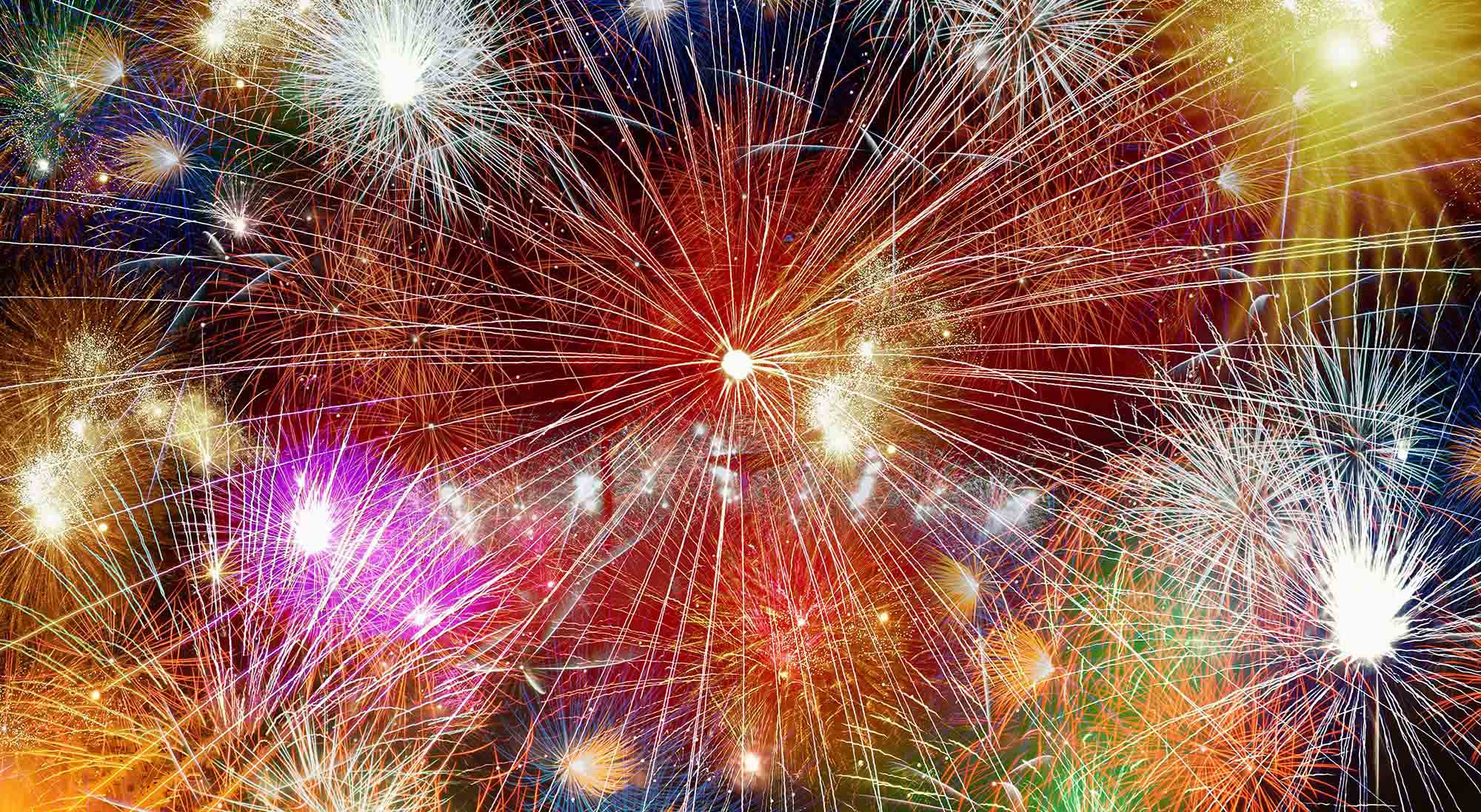 Le Réveillon, São Silvestre, and Passagem de Ano. New Year’s Eve in Lisbon goes by a lot of different names, but one thing’s for certain: Lisbon is definitely a fun place to ring in the new year.

There are a few different ways to celebrate New Year’s Eve in Lisbon, and it depends on what your priority is. Some people like to have a lengthy dinner that takes place over several hours, pausing at midnight to ring in the New Year.

Others prefer to be in the heart of the action, and so they make sure they’re at Praça do Comércio (Terreiro Do Paco) or Belém to enjoy the live music and fireworks.

Others again prefer to attend one of the private NYE events happening at Lisbon’s many different hotels and casinos, many of which are black tie parties. There are also pub crawls, river cruises, fado evenings, and just about every other type of event happening in Lisbon.

There are also plenty of events happening in the days prior to the 31st, particularly the 29th and 30th. On these two days you’ll usually find concerts happening in Praça do Comércio (Terreiro Do Paco) as a warmup for the main event, as well as other events like the Corrida de São Silvestre (São Silvestre 10 km Road Race) which takes place in the days leading up to NYE.

Finding out about these events isn’t always easy, but thankfully more and more restaurants, bars, and hotels are advertising these events on their websites and Facebook pages. This article will also hopefully serve as a starting point, and help you to find what you’re looking for.

Where to watch the fireworks

New Year’s Eve just wouldn’t be the same without fireworks, and there are several places to watch the different displays in Lisbon.

Praça do Comércio (Terreiro Do Paco)

The biggest and most popular party and fireworks display happens at Praça do Comércio (Terreiro Do Paco) which is the big square in the centre of Lisbon. Entry is free, and there’s live music from around 10 pm. The artists are usually Portuguese bands and singers, so you won’t know who they are but does that really matter? As midnight approaches, everyone starts getting their bottles of espumante (Portuguese fizz) and plastic cups ready and then the big countdown happens.

This is in the centre of town, so there are plenty of bars and restaurants nearby that you can go to first. Afterwards, people usually spill out onto the bars on the Pink Street (and nearby) in Cais do Sodré, up to the Bairro Alto, and then onto Lisbon’s nightclubs.

Belém is another popular destination for NYE, and one that’s slightly lower key than the main one in Praça do Comércio. The event takes place near Torre de Belém (Belém tower) and includes both music and a fireworks display. There are plenty of restaurants nearby, as well as places to get a drink.

Parque das Nações is a modern part of Lisbon outside of the city centre that’s made up of modern apartment blocks, a large shopping mall, and a huge events space. It’s a popular area to live in, and the area has its own fireworks display which also includes music and fireworks. This is a much more low key event than the events in Praça do Comércio and Belém, and it tends to quieten down a lot earlier.

Parque das Nações is very near Lisbon Airport so, if you’re in Lisbon for NYE on a layover or stopover and have an early flight the next morning, this could be one of the best places to watch the fireworks from. There are plenty of hotels in the area, as well as restaurants and places to get a drink.

Almada is the district directly across the river from Central Lisbon, and it’s here that the Cristo Rei statue (the big one of Jesus) is located. For people that live on that side of Lisbon, this is also a popular area to watch the fireworks from and, if you want to join them, you can easily get over to Almada by taking the ferry from Cais do Sodré to Cacilhas.

The Castelo de São Jorge, Lisbon’s big castle that overlooks the city, offers a great viewpoint from which to see the fireworks display at Praça do Comércio and you can often spot the display in Almada as well. This spot is ideal for those that are spending the night in and around Alfama and Mouraria and who want to see the fireworks, but don’t want to join the crowds at Praça do Comércio.

Cascais is a small seaside town that’s located around 45 minutes by train from Lisbon City Centre. On New Year’s Eve, Cascais will have its own fireworks display as well as live music and, if you don’t fancy venturing into Lisbon, you could ring in the New Year here at the marina or on the beach instead. Alternatively, many of the hotels and casinos here in Cascais and nearby Estoril have NYE packages that include dinner, drinks, entertainment, and accommodation.

Parting your way into the new year

If you’re looking for a party, the biggest event is the one at Praça do Comércio (Terreiro Do Paco). Here, from around 10 pm onwards, there’ll be plenty of live music as well as the spectacle of watching the fireworks themselves.

After midnight, there are plenty of places nearby to continue the party. Pink Street and pretty much all of Cais do Sodré is a great place to head and only a few minutes’ walk from Praça do Comércio. If that’s too busy, there’s also the Bairro Alto which is around 15 minutes by foot and has plenty of bars and other places to grab a drink, rub shoulders with locals, and decide whether you want to follow them onto one of the city’s many nightclubs to continue partying until the early hours.

Eat your way into the new year

For foodies (or those that just don’t fancy spending NYE in a crowded space) Lisbon is a fantastic place to spend New Year’s Eve. Most of Lisbon’s restaurants have lengthy multi-course dinners that take place over several hours and continue past midnight, with a break to ring in the New Year.

Finding out about restaurants that offer a NYE menu isn’t always easy. The Fork, a restaurant booking website owned by TripAdvisor, is making all of that a little easier and is a good starting point. Alternatively if you already know a restaurant that you’d like to spend NYE in, you can also check their Facebook page or just give them a call.

Spaces for these events can fill up quickly, so try to book as soon as possible. If it’s the 31st of December and you still don’t have anything booked, definitely take a look at The Fork to see what’s available.

So, if fireworks are important to you but you want a lengthy dinner as well, pick a restaurant near the water in one of those areas. If fireworks aren’t a big priority for you then you have your pick of the whole city.

Many of Lisbon’s hotels host NYE galas and parties. These typically cost in the region of €150-200 per person, and include dinner, drinks, and entertainment. Some have packages that include accommodation as well, or you could book the accommodation at the hotel normally and contact the hotel to book in for the NYE party.

This is just a sample. Most luxury hotels, especially the 5 star hotels, have something happening but they normally don’t advertise it until the end of the year. Even then, it’s usually only advertised on their own website and Facebook page.

As well as the options of street party or en elaborate meal, there are also always plenty of events happening around the city.

Le Reveillon no Convento do Beato

Le Reveillon at Convento do Beato has become something of a Lisbon tradition, and is one of the most popular NYE events that happens in Lisbon. There are usually two options: either an entrance pass to the party (which also includes some drinks) or a pass that includes dinner and the Fim De Ano party as well.

Drinks and raisins are served at midnight, and then at 4 am there’s also a buffet of traditional Portuguese favourites including pataniscas de bacalhau, pregos, caldo verde, and hot chocolate.

Another popular party is the Fim de Ano event at Palácio Real da Tapada da Ajuda. Situated in the heart of Lisbon, and overlooking the River Tagus, this event features drinks, live music, and a party that goes on through the night.

As with Le Reveillon no Convento do Beato, there are usually several different ticket prices: normal entrance, entrance with dinner, or the option to buy a VIP table for your group which includes several bottles of spirits, soft drinks, and champagne.

A night of live music and entertainment, with the option to include dinner, in at the Casino de Lisboa in Parque das Nações. In previous years, the music has been fado and a DJ.

There are normally several dinner cruises that take place on NYE in Lisbon. These are quite intimate events, and being on the Tejo itself means that you have one of the best views of the fireworks in the city.

More information about these cruises can be found on Viator.

Another Lisbon NYE option is to spend the evening watching Fado, Portugal’s traditional music. You’ll find fado shows, which normally include dinner, happening in and around Alfama, Mouraria, and the Bairro Alto on NYE at venues like Clube de Fado, O Faia, Café Luso, and Adega Machado.

Places to meet other people

Meeting new people around NYE can be hard, but Meetup.com and Couchsurfing.com are two good places to begin your search.

It’s hard to predict what the weather will be like for NYE. The end of December can be quite grey or it can be sunny, and it’s impossible to know.

It’s worth mentioning that it can be cold in the evenings, though. It won’t be anywhere near as cold as it is in other NYE destinations like Scotland, London, and Germany, but you will need to bundle up a little.

The houses can also be cold as Portuguese houses are designed to get rid of heat rather than retain it. Most apartments and Airbnb rentals don’t have central heating as this isn’t common in Portugal, so you may need to bundle up inside as well. Modern hotels are much more likely to have central heating and to be warmer and, if you don’t need the kitchen and other facilities that come with an apartment, a hotel might be a more sensible option.

January the 1st is a quite a quiet day in Lisbon, and most shops and restaurants will be closed. If you’re looking for a restaurant your best bet is to head to the more touristy parts of town (Baixa, Chiado, and Belem, for example) as you’re much more likely to find a few that are open here.

Other places in Portugal to spend NYE

Portugal is a fantastic country to spend New Year’s Eve in. Madeira is famous worldwide for its fireworks displays, and Porto is a spectacular place to ring in the New Year as well. The Algarve is comparatively a much quieter affair, but you’ll find plenty of fireworks displays at many of the different towns along the coast.

Have you been to Lisbon for New Year’s Eve? Did you go to the main party at Praça do Comércio (Terreiro Do Paco) or did you go somewhere else? Let us know about your Lisbon NYE experience by leaving a comment below.